My wife and I recently spent a couple of very enjoyable days hiking and biking in Acacia National Park.  There's not much to be said that hasn't already been written about this scenic spot on coastal Maine. Therefore,  this Blog report will have very little narrative.  It will consist mainly of a series of snapshots which are mainly just a rehash of images that have been published by countless other sightseers.  Regardless, there might be something of interest here to a few readers.

When we arrived in Bar Harbor, we were greeted with a rainbow which is shown in the following photo.  The rainbow is faint, but it can be seen if you look for it on the right hand side of the snapshot. 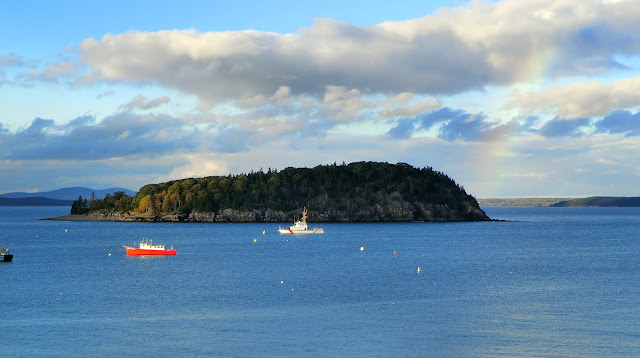 
At the end of the day, were treated to a bright moon that was reflected on the water in the harbor. 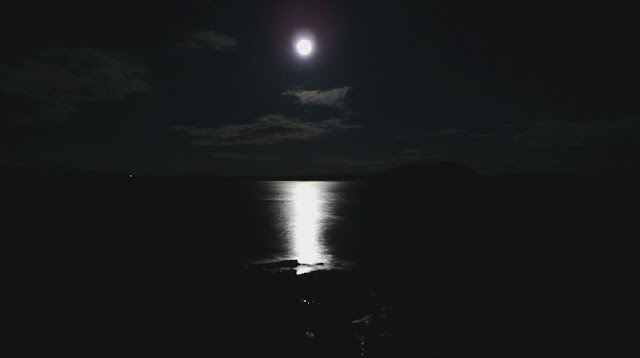 The next morning, there was a picturesque sunrise which almost resembled a sunset in appearance! 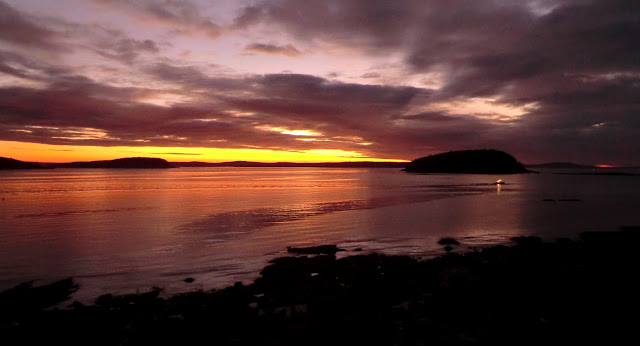 The first spot we visited was Jordon Pond where there is a scenic view of South and North Bubble at the end of the pond (see next 2 photos). 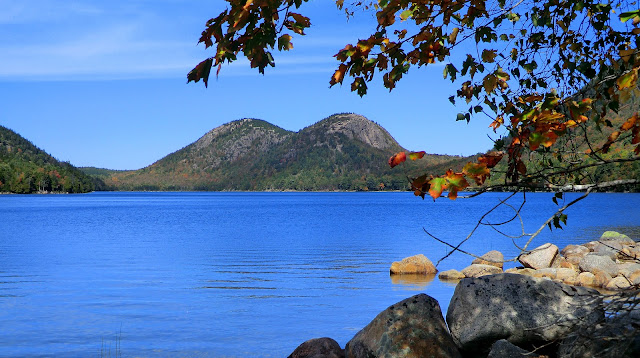 The "Bubbles" as seen from Jordan Pond 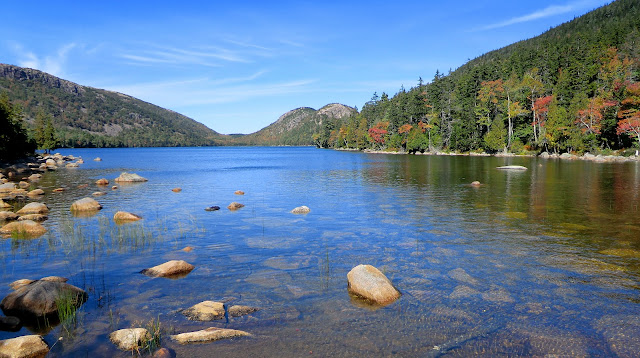 Another view of the "Bubbles" as seen from Jordan Pond

The next photo is just a spot along the shoreline of Jordan Pond that I thought was attractive. 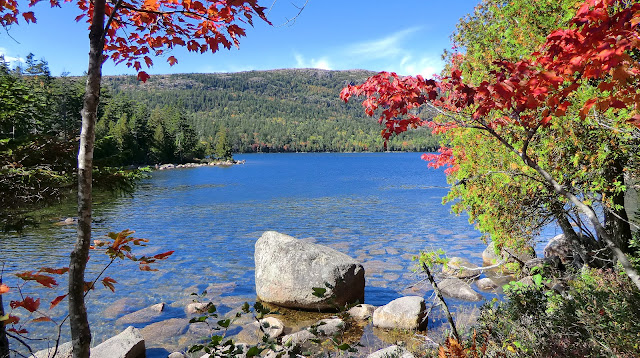 Nothing special, just a picturesque vista along Jordan Pond

Following our hike around Jordan Pond, we drove to the top of Cadillac Mountain.  Among many nice views, there was a vista of the town of Bar Harbor. 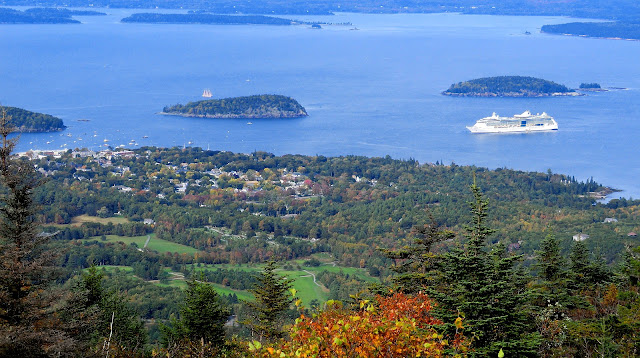 Bar Harbor as viewed from the top of Cadillac Mountain


The areas of the park named Sand Beach and Great Head were next on our agenda.  From the Great Head Trail, there is a view overlooking Sand Beach.  The little rounded mountain with all the bare rock is called The Beehive. 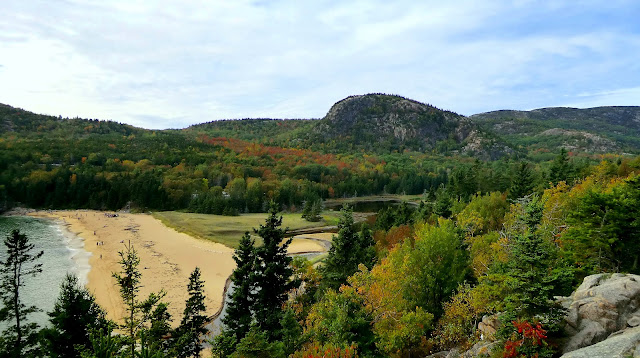 Sand Beach and The Beehive as viewed from Great Head Trail 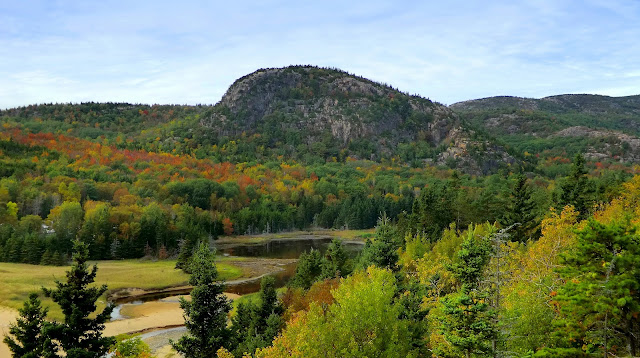 Closer view of The Beehive as viewed from Great Head Trail 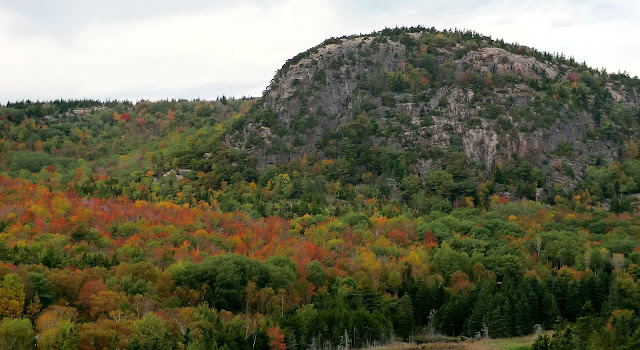 Highly zoomed view of The Beehive from Great Head Trail

Not far from The Beehive, bees were busily feasting on the wildflowers.  What could be more appropriate?! 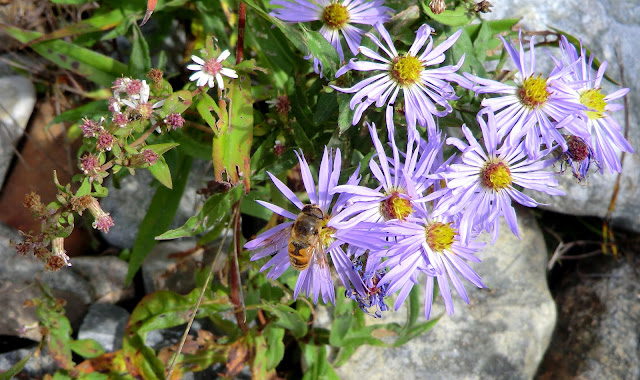 Bees feasting on wildflowers near The Beehive


The next 3 photos are of nothing in particular.  They are merely included to show off the autumn colors that we experienced in this area. 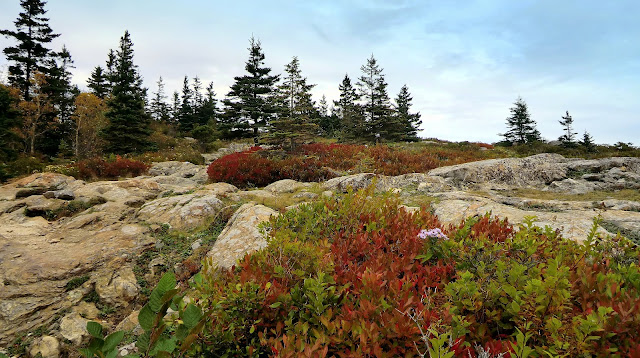 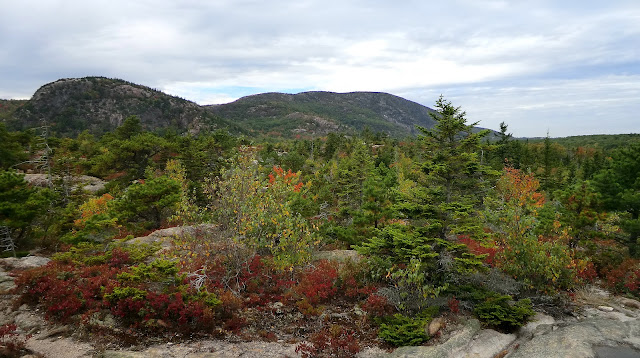 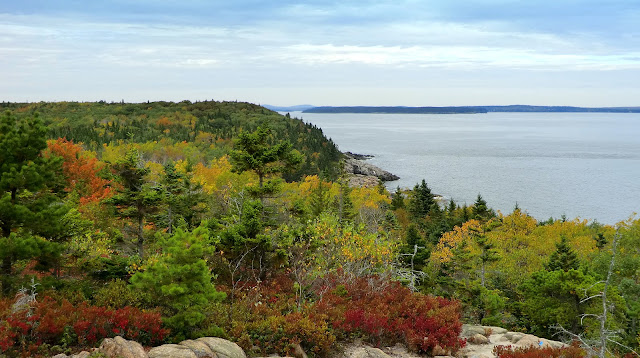 Yet another autumn scene in Acadia National park

The next 4 photos are just some scenes along the coastline in the area of Great Head and Otter Cliff. 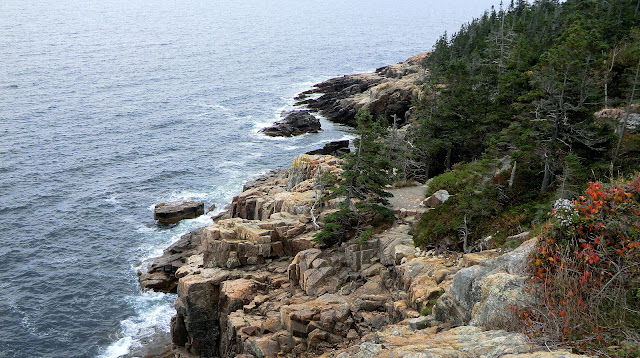 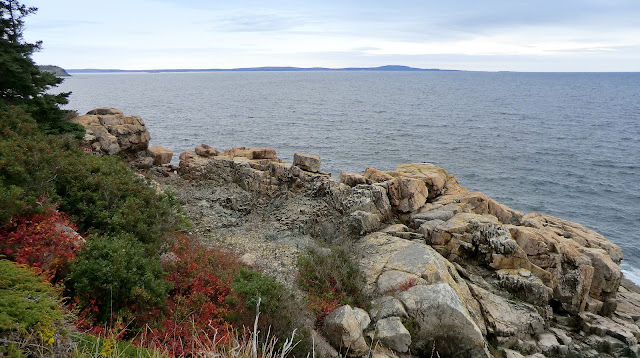 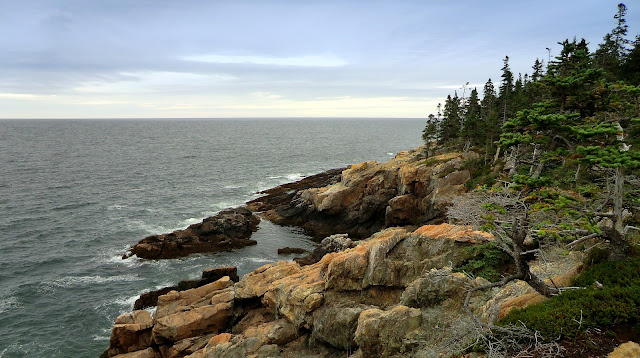 Yet another coastal scene in Acadia National Park 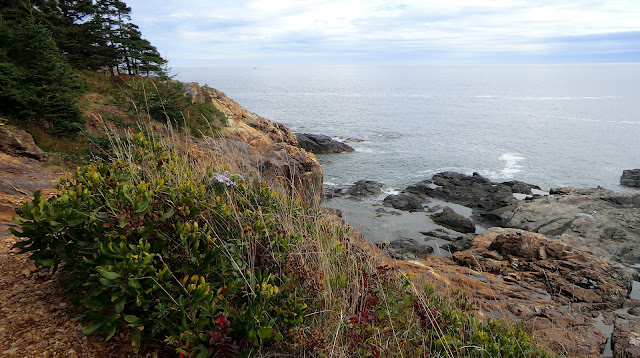 And one final coastal scene in Acadia National Park

The next snapshot was taken from the south end of Bubble Pond looking northward. 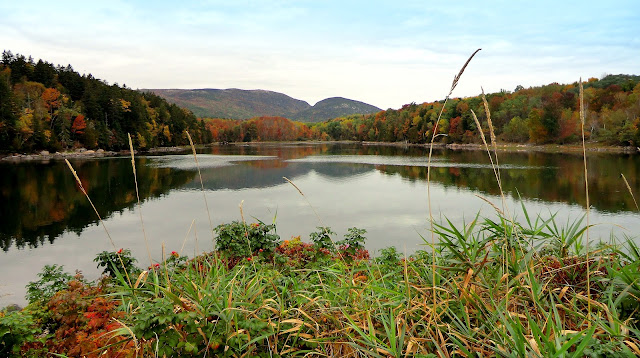 Shown in the next photo is what I think might be a portion of North Bubble on the horizon with the cliffs of Conners Nubble in the foreground.  The snapshot was taken from the east shore of Eagle Lake at its southern end. 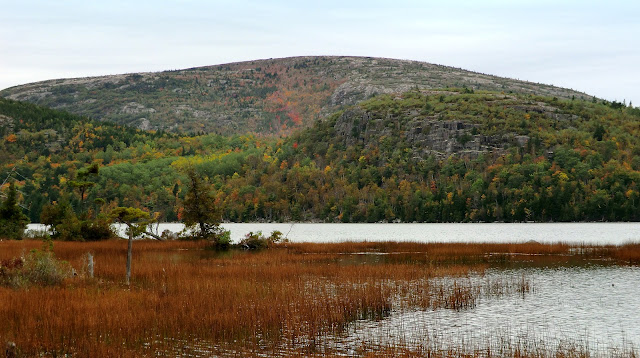 There are a lot of Jack Pine trees at various locations in Acadia National Park. Jack Pine can be found in New Hampshire, but it is rare. 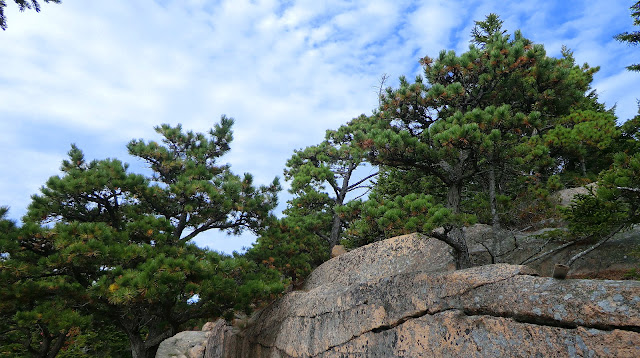 And speaking of trees, there is nothing particularly special about the next photo.  It just shows one of the hiking trails in Acadia that winds its way through a forest of white birch. 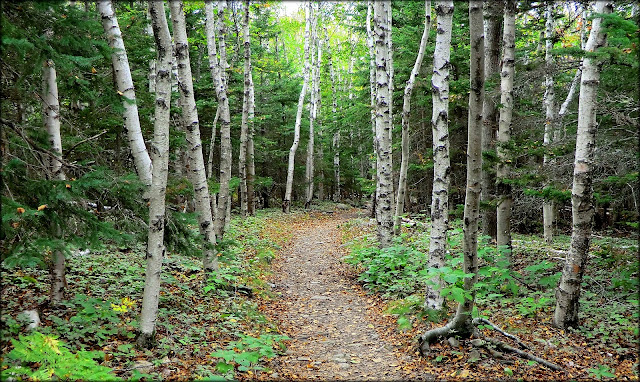 And what's up with this next photo?!  Well, it was amusing to see a gull perched atop a car, and it seemed like as good a way as any to end this report! 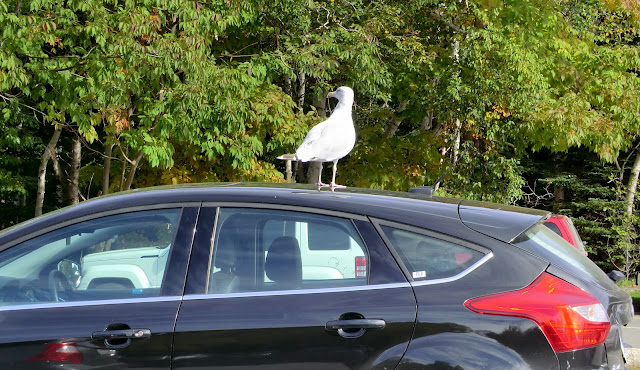 To sum it up, if you've never visited Acadia National Park, it's a very worthwhile destination.   My wife and I had been here several years ago, but it was still a treat to visit this scenic spot once again.
Posted by 1HappyHiker at 9:33 PM

Great stuff John! I haven't been to Acadia Nat'l Park in years. It's time to go back.

Glad you liked the photos, Gary.

I know what you mean about it being “time to go back”. It had been many years (actually nearly a couple of decades) since my wife and I last visited Acadia. Each time we thought about going, something seemed to get in the way. It was indeed well beyond “time to go back”!

Great to see your photos after we were there several weeks earlier. Jordan Pond looks so blue and beautiful. And I like your shots of the Beehive from a vantage point that we did not get to. We all go to see the rocky coast, but I think the inland wetlands, trails, hills, and mountains of Acadia are just as beautiful. Glad you had nice weather. Thanks for sharing your trip.

Ellen, you certainly enhanced our trip by providing such terrific information about your Acadia trip on your Blog (http://spicebush.blogspot.com/).

We even took your suggestion to eat at the restaurant called Blaze where we enjoyed a wonderful meal!

Thanks Kim! Very much appreciated!

Wonderful photos, John. I haven't been to Acadia in 25 years and your pictures take me right back there.
What a great October get-away. Love the coastal shots—and the sunrise is just spectacular!

Stumbled across your blog via OBN - thanks for sharing glorious views of Acadia! I'd love to get there in the autumn. Your photos are pure inspiration!

It’s terrific to read that my photos were able to transport you back in time to your visit at Acadia. It’s a special place, and one of the crown jewels in our national park system. And yes, the coastal scenes at that park are spectacular. It is coastal New England at its finest!

Thank you for your generous comment about my photos!

It’s wonderful to read that you found my Blog via the OBN (Outdoor Blogger Network). It offers further proof of the value of “networking”!

I see from your Blogger profile (http://www.blogger.com/profile/10732283765308771302) that you are a fellow New Englander, and that you are the author of several very interesting outdoor-related Blogs.

Not sure how I missed this post when you first put it up, but I'm glad I saw it now. You're right about one thing - I've seen many versions of these images before. I've also been fortunate to see all of them numerous times in person. I'll NEVER get tired of them though. Acadia and all of Mt Desert for that matter is one of my very favorite places on earth. We're so lucky to have such a gem close enough that we can drive there in a day. Your images (sorry, I can never think of your photos as snapshots) capture everything so beautifully. They also remind me how much I love this place in the autumn and how long overdue we are for a visit in this wonderful season. Thanks for the reminder!

Mark, thank you for your thoughtful comments!

As I know you know, Acadia is just one of the many, many exquisite places here in New England. What a magnificent place to call home!