Since it was right in the middle of the Columbus Day holiday weekend, the trailheads in the Crawford Notch area were busy and crowded.   However, even though the Willey House historic site was busy, there was still plenty of available parking.  And so, I parked my car, put my "point & shoot" camera around my neck, and blended right in with the tourist crowd!


I began my crusade to capture some autumn colors by taking snapshots of Mt. Willard as viewed over the seasonal pond that is created by the temporary damming of the Saco River during the warm-weather months. 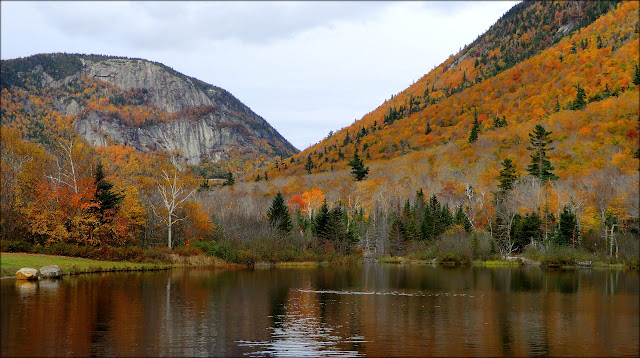 Cliffs on south face of Mt. Willard as viewed from pond at Willey House site 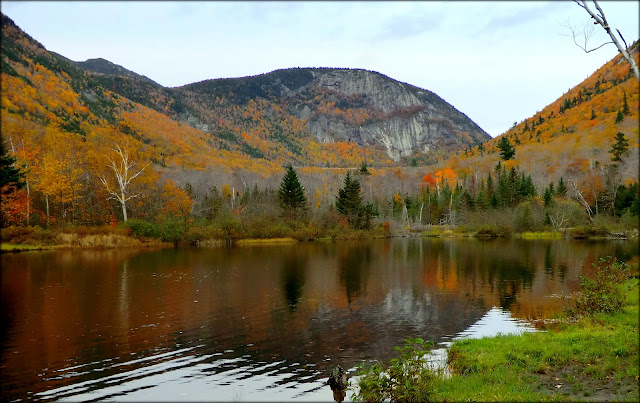 Another snapshot of cliffs on south face of Mt. Willard as viewed from pond at Willey House site

Next, I turned my attention to taking some snapshots of a particularly colorful portion of the cliffs on Mt. Webster. 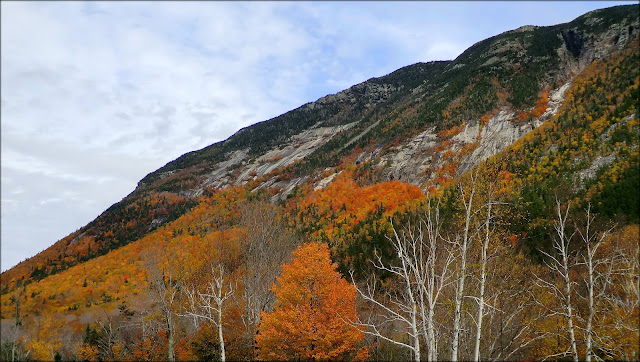 After photographing the vistas shown above, I then began snapping some random snapshots of a variety of things which I thought were picturesque. 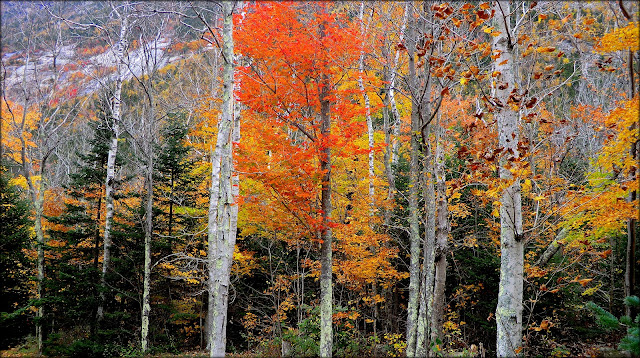 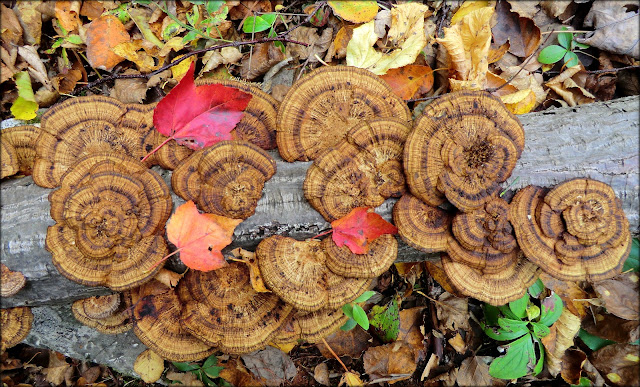 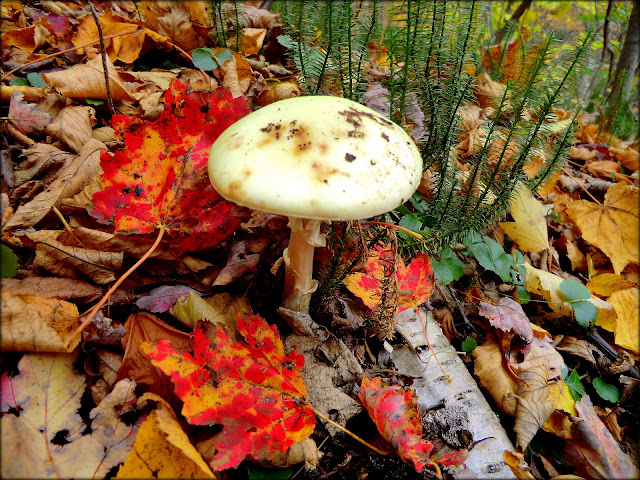 A solitary "pretty as a picture" mushroom 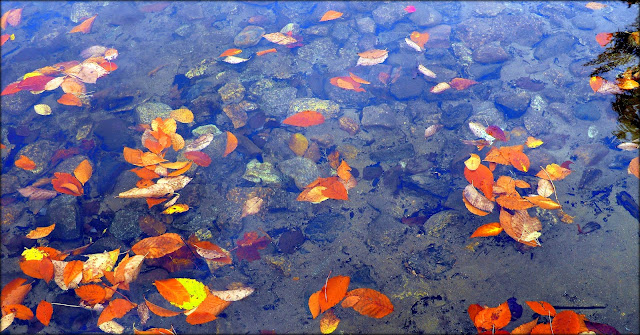 Autumn leaves floating in the pond at the Willey House site

After 20 minutes or so, I left the Willey House site and then drove about a tenth of a mile up the Crawford Notch.  I parked at the widened shoulder of the road which is used by ice climbers to access a massive rock slab that accumulates a thick layer of ice each winter.  I followed the faint pathway that leads to this slab.  From previous visits to this spot, I knew that it provides an interesting perspective looking northward up the Crawford Notch.

The pathway to the slab crosses over the railroad tracks used by the seasonal tourist trains.  Before crossing the tracks, I looked both directions (my Mom would be proud), and then took photos looking northward and southward. 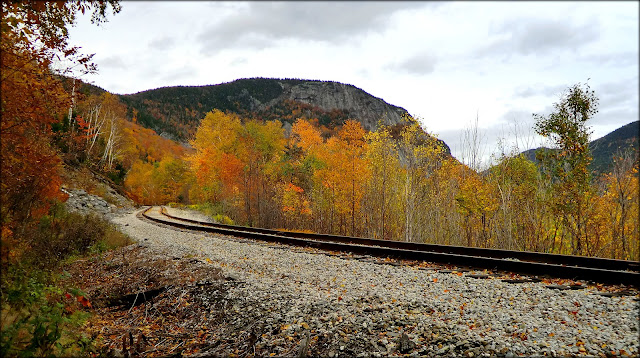 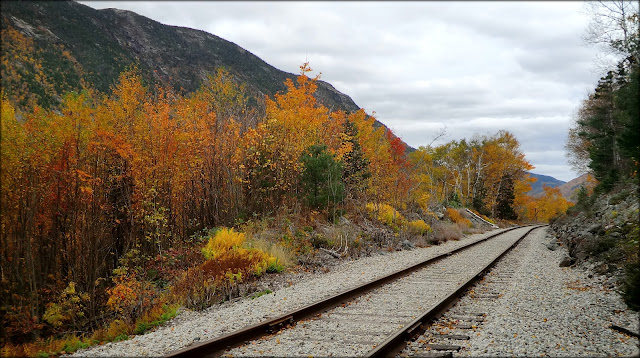 From the railroad tracks, it's only about a 5 minute hike to reach the slab.  The next photo shows just a small portion of this enormous chunk of rock. 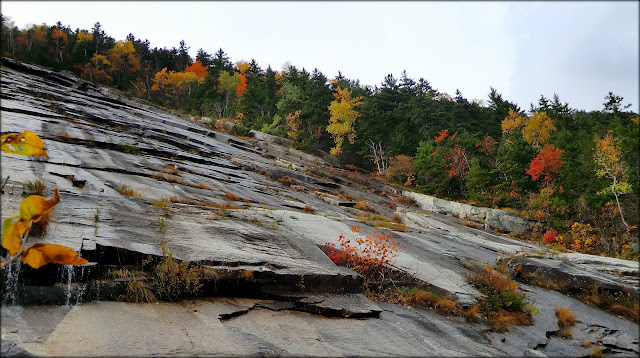 Small portion of enormous slab on west side of Crawford Notch

The vistas from the edges of this slab are both interesting, and picturesque. The next photo is slightly zoomed and shows a portion of the Crawford Notch in the vicinity of Mt. Willard. 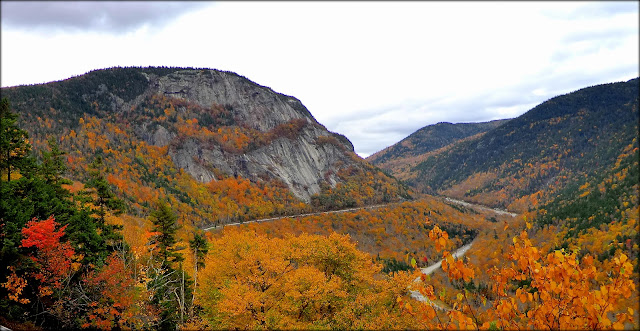 Slightly zoomed view of Crawford Notch in the vicinity of Mt. Willard

This next snapshot is basically the same as the previous photo, except it is NOT zoomed, and it shows a portion of the slab in the foreground. 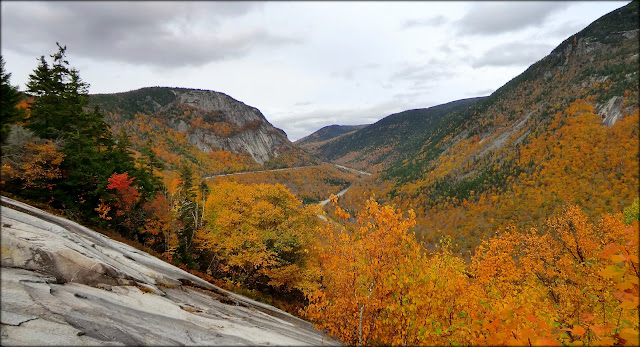 Un-zoomed view of Crawford Notch in the vicinity of Mt. Willard

I also took a snapshot looking toward Mt. Webster, which is located directly across the slab on the opposite side of Crawford Notch. 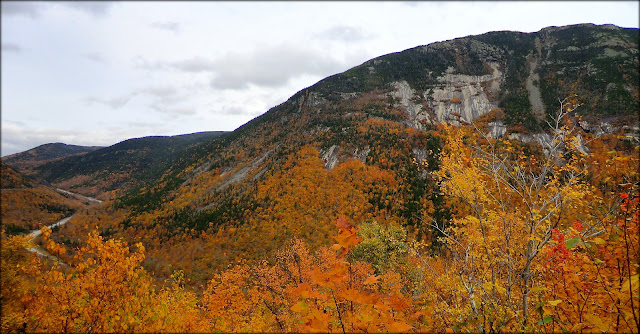 A portion of Mt. Webster (as viewed from the slab on the western wall of Crawford Notch)

And, shown below is one last photo.  It's a highly zoomed snapshot of Mt. Willard.  If you look very closely, you can see the tiny "dots" of hikers enjoying their day atop the massive cliff on the south end of this mountain. 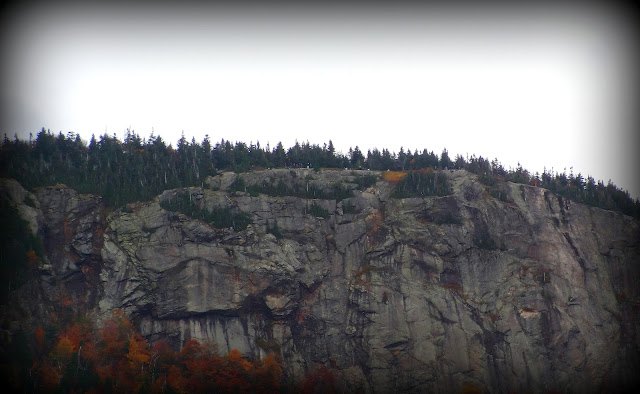 Highly zoomed photo of Mt. Willard (hikers can faintly be seen at the top of the cliff)

To sum it up, although I thoroughly enjoyed my recent visit to Acadia National Park in Bar Harbor, ME, this mini-trek in the Crawford Notch served as a gentle reminder that there's a lot of really neat stuff to be seen right here in New Hampshire!
Posted by 1HappyHiker at 9:12 PM

Beautiful photos, John. Thank you for sharing them!

Autumn is such a beautiful time of year. You can usually get a decent photo no matter where you “point & shoot”! :-)

This is such a wonderful time of year! And New Hampshire is a great place to experience the wonders of autumn.
Your recent posts make me want to visit the northeast in October; the views around Crawford Notch are amazing. I love the bright orange trees.
Also, your "up close and personal" shots (fungus, mushroom and floating leaves) are so well-composed. Sometimes fall color shouts out from obscure places. Very nice John!

Rita, your accolades are so very much appreciated! Thank you! However, Mother Nature deserves most of the credit.
All I can attempt to do with my “point & shoot” camera is to capture a mere fraction of the beauty of the Autumn Season.

You got some amazing shots John. #2 is my new desk-top, hope you don't mind. The forecasts put me off to heading there so these reports are all I've got this year. :)

Joe, that is so kind of you to post such glowing words about the photos taken on my romp in Crawford Notch! Thank you!

Thank you for this post and all the lovely photos! I think I've missed the peak foliage this year, so this is a treat. I've been substitute teaching high school for a friend of mine, full time for the past three weeks, so I haven't been hiking as much as usual. Only 2 more days left, and he'll be back in his classroom. Meanwhile, I've been enjoying everyone else's photos!

Summerset, I’m very pleased that you and others enjoyed the photos. Sharing of one’s hiking experiences, via words and photos, is part of the overall fun!

I live near there (Whitefield) and it's one of our favorite spots along with watching the cog trains go up Mt. Washington at the base station. We didn't get out to leaf peep this year - thanks for sharing.

Thank you so much for taking time to post a such a nice comment to my Blog!
I’m truly delighted that you enjoyed the photos, especially since you were unable to “leaf peep” this year.