A "Reel" Good Approach Route to the Kinsmans!

Wow!  What a terrific approach to South and North Kinsman mountains!  Over a year ago I'd been told by the veteran hiker Steve Smith that a scenic and interesting way to visit the Kinsmans is to do an 11.5 mile trek which begins at the Reel Brook Trail and exits via the Mt. Kinsman Trail.   On 23-Aug-2011, I decided to embark upon this adventure.  I'm so glad I did it!  As indicated in the title of this report, it is a "reel" good approach route.  It has to rank high on my list of favorite hikes I've done over the years.

I'm uncertain as to the best way to present the details and photos from this trek.  So, I'll just use a conventional chronological recounting which starts with my trek up the Reel Brook Trail.  The hike along this trail was pleasant, but quite uneventful.  Despite being a lightly-used pathway, it's generally well-maintained.  A few sporadic blowdowns were easily negotiated in one manner or another.  And, the multiple water crossings were very doable.

In less than 2 hours, I arrived at the junction with the Kinsman Ridge Trail.   The trail sign at this junction appears to be quite old and weathered. I wonder if the numbers stamped on the edge of this sign indicate that this sign has been at this location since around 1985? If so, that sign has certainly seen a lot of weather over the past quarter century! (Note: Clicking on any photo in this report will slightly enlarge it.) 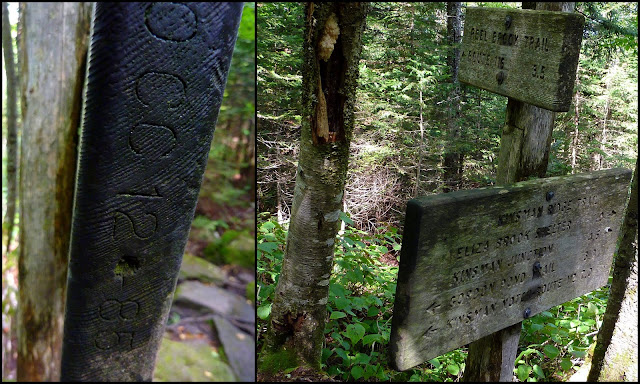 From this trail junction I headed northbound on the Kinsman Ridge Trail (KRT).  Within 15 minutes I came to the point where the power lines cross over the KRT.  I'll simply say that this spot offers an "obstructed" view toward Bog Pond. 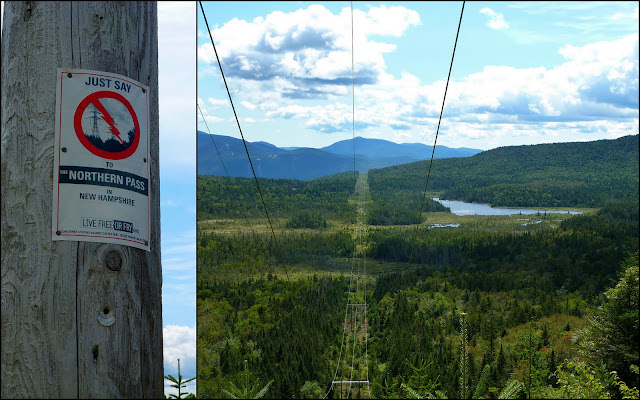 The next stop on my northbound trek along the KRT was the newly reconstructed Eliza Brook Shelter.  The hardworking crew did a fabulous job on this project! 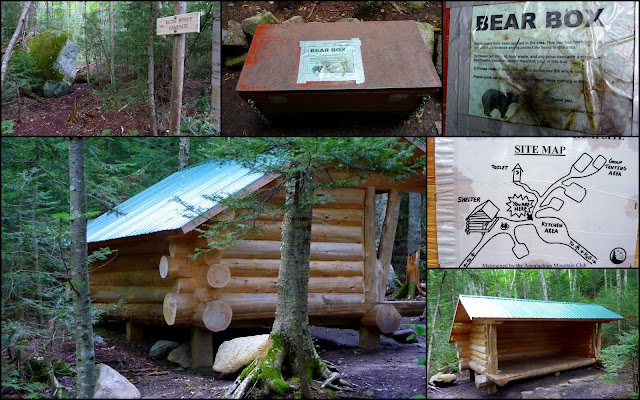 After leaving the shelter, it wasn't long before I came to the stretch of trail described in the White Mountain Guide as ". . . a very scenic section of Eliza Brook with several attractive cascades and pools."   Phew!  Maybe I'm just easily impressed, but in my opinion, the word "attractive" is an understatement!  The cascades along this stretch of trail are awesome, and numerous!  After awhile, I simply stopped taking photos.  There is just one beautiful cascade after another.  I can't believe that these gorgeous places are unnamed!
Shown  below is the first cascade that I came upon.  It's difficult to get true perspective from this photo, but it's a rather small cascade. I thought, okay that's cute!  So, I snapped a photo and thought this would be the type of cascade that I'd encounter all along the brook.  WRONG! 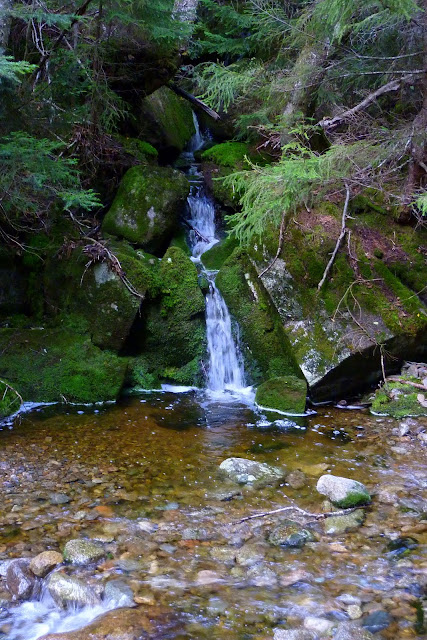 Shortly after encountering that first cascade, I came upon a larger one (next photo).  What a picturesque cascade! 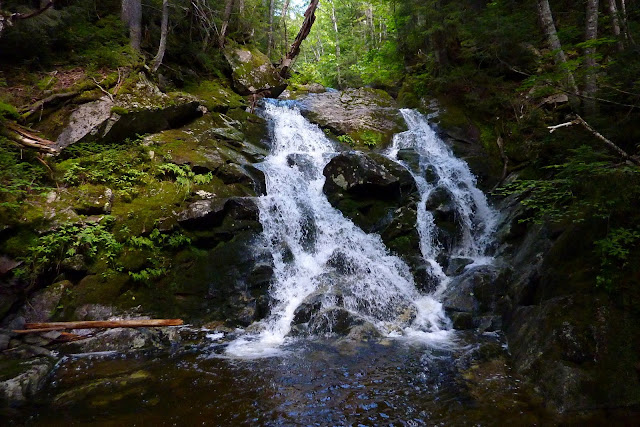 The next photo is a side view of the same cascade shown above. 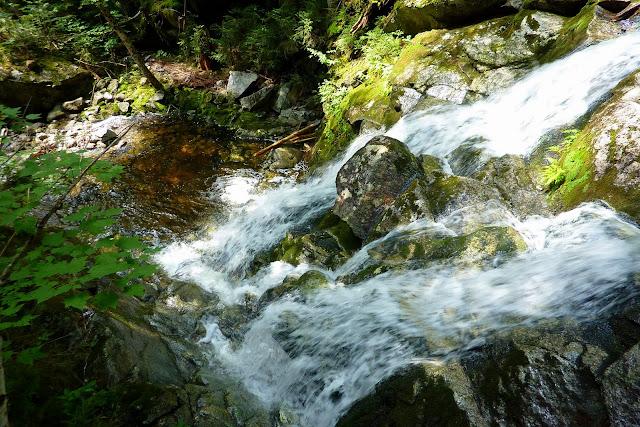 I was then totally surprised to encounter a cavalcade of other cascades.   Shown below are just a couple of them. 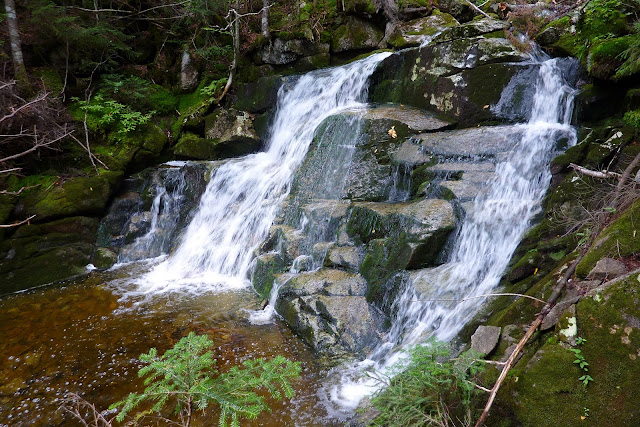 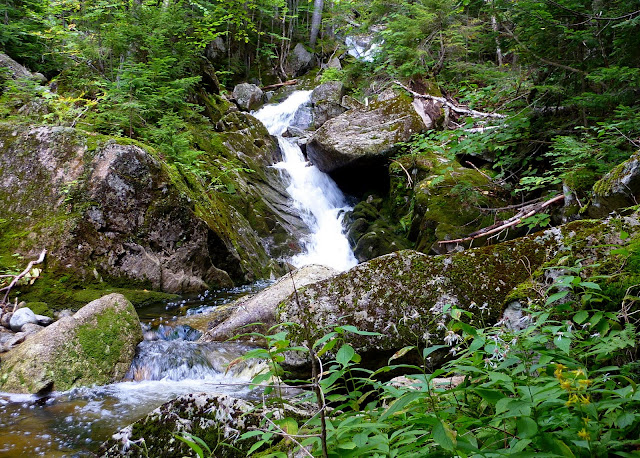 Following the delightful scenes along "cascade alley", I made the steep climb up to Harrington Pond which is a watery spot that is totally different in nature.  Perhaps the word primeval is an appropriate way to describe this place.  One could almost envision a dinosaur grazing here!
If nothing else, I think it's fair to say that this pond has its own unique beauty, especially at this time of year when the reddish Pitcher Plants are abundant around the perimeter of the pond. 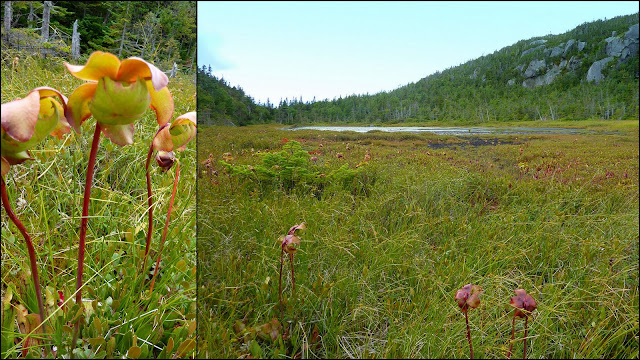 And just for good measure, the next photo shows one more scene from the area around Harrington Pond. 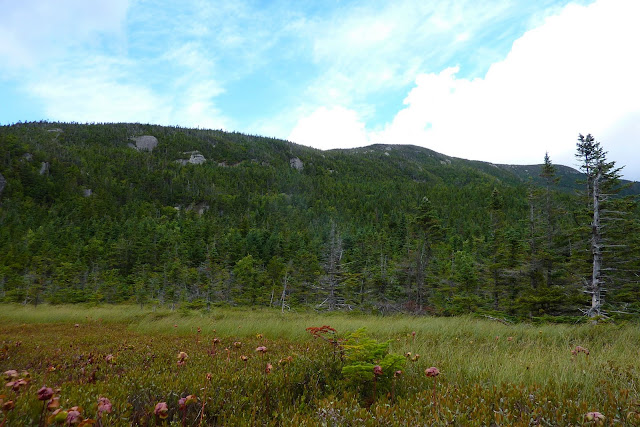 Although this was the first time I had taken this route to the Kinsmans, it wasn't the first time that I had visited Harrington Pond.  In March 2010, Steve Smith and I bushwhacked to this location from the Reel Brook Trail.  We experienced some unique wintery scenes from the shore of the  pond, as well as from a little ledge above the pond.  (Click HERE if you're interested in a report of that adventure.)
After lingering awhile at Harrington Pond, it was time to move onward to the next major scenic spot along my route.
Next stop . . . South Kinsman!
En route to South Kinsman, there were small patches of mushrooms which I thought were photo-worthy! 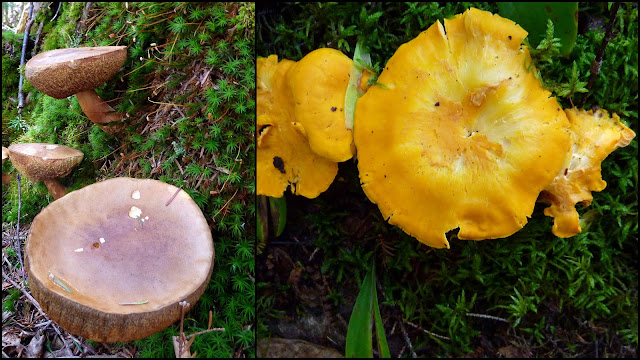 Just before reaching the top of South Kinsman, I took a short detour along a little spur path where I could look back at Harrington Pond.  Gheez! The pond looks way far down there!  I guess it really is quite a climb from Harrington Pond up to South Kinsman! 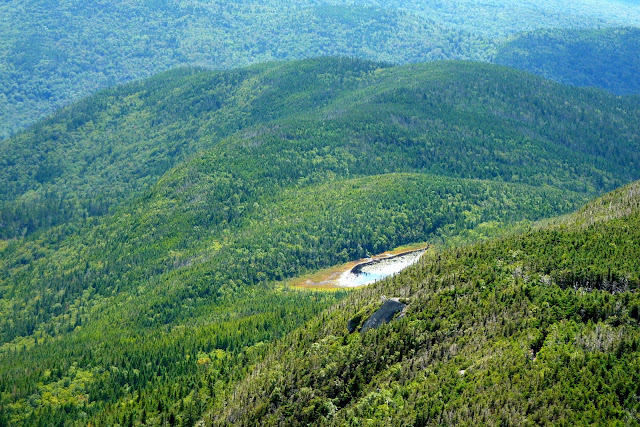 Oh! And what was the reason for all the helicopter activity in the mountains on 23-August??  I heard them off and on all day long, but couldn't actually see one until I arrived at the top of South Kinsman. 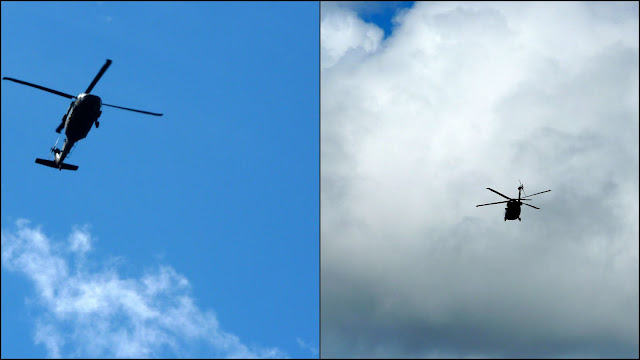 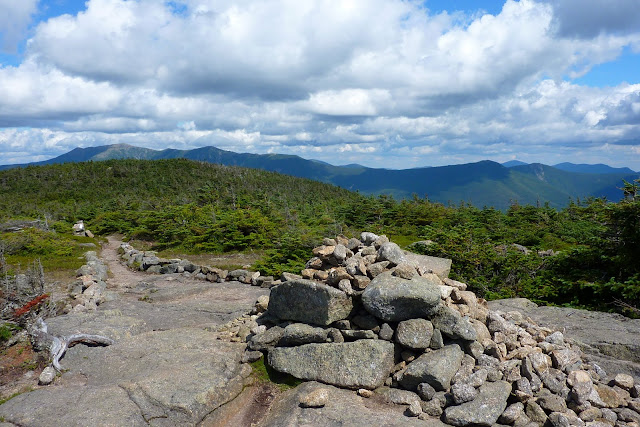 Following a short rest on South Kinsman, I departed for North Kinsman which was my last major target of the day.  I don't know why, but I've always enjoyed that short trek between the two Kinsmans.  Perhaps it's because of pleasant little vignettes along the trail such as shown in the next photo. 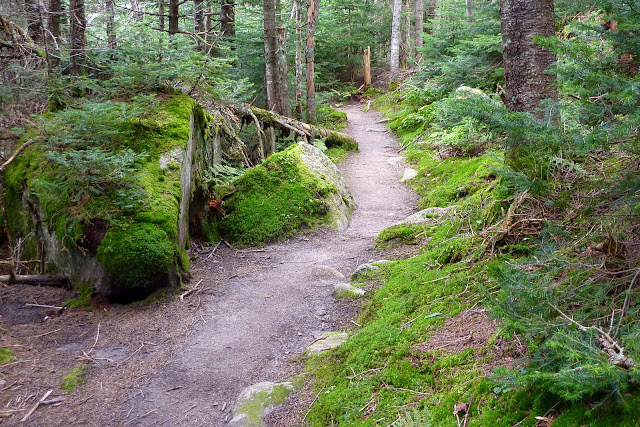 Upon arriving at North Kinsman, I headed directly down to my favorite ledge that overlooks Kinsman Pond.  The lighting conditions were not the best, and therefore the next photo is also not the best!  Nonetheless, it gives a good idea of the view from this splendid little perch. 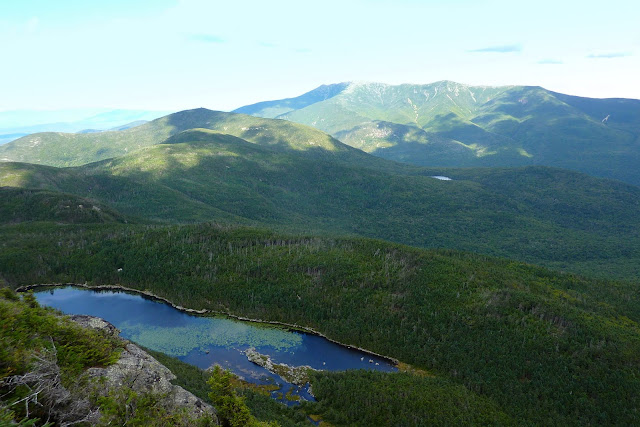 For the majority of the time that I was sitting on this ledge, the clouds were casting dark shadows on the Franconia Range.  However, for a few brief shining moments, the mountains were illuminated and I managed to capture the image shown below.  (Lonesome Lake is in the shadows at the bottom center of the photo.) 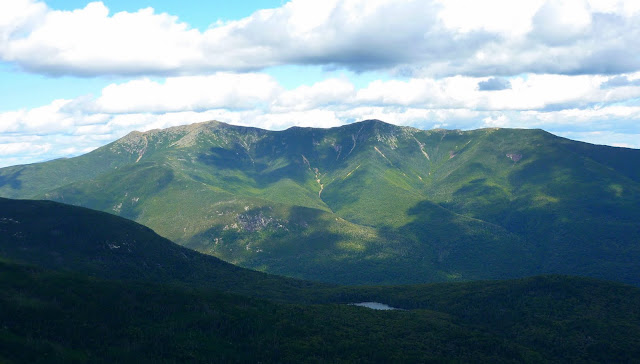 It was getting late in the day and so I headed down North Kinsman via the KRT to intersect with the Mt. Kinsman Trail. 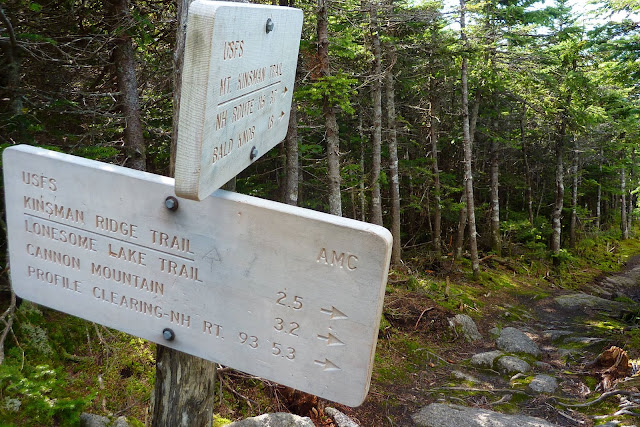 The 3.7 mile descent along the Mt. Kinsman Trail was generally uneventful.  However, there are some spots along this trail that I find picturesque, such as the little cascade shown in the next photo. 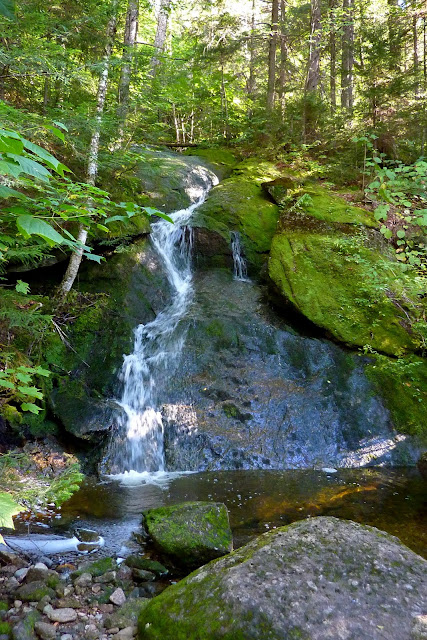 And, there is a particular brook crossing that I also find attractive (photo below). 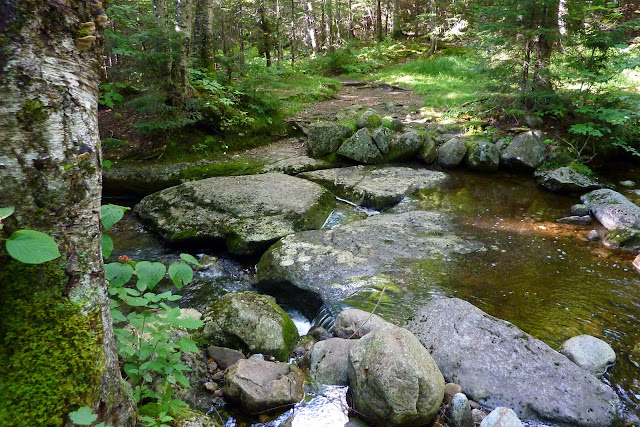 As was the case for my recent hike to Mt. Garfield (click HERE for that report), my wife was agreeable to drop me off at one trailhead in the morning, and then pick me up at another trailhead at the end of the day.  Since both trailheads are less than half an hour from our home, this arrangement worked out fine for both of us.
To sum it up, this was one heck of a trek!  It's difficult to pick out a favorite feature since there were so many.  The multiple cascades along Eliza Brook were a total surprise.  Also, it was terrific to make a return visit to Harrington Pond during a different season of the year.  And, of course, visiting the Kinsmans is always an awesome experience!
Posted by 1HappyHiker at 5:31 PM

Great report on a terrific route! Cascades, ponds and open summits - this trek has it all! The new shelter looks "pristine." Nice to see Harrington Pond in its summer garb.

STEVE: Leave it to an accomplished author such as you to accurately and succinctly portray this hike with one statement, i.e. “Cascades, ponds and open summits - this trek has it all!”

What a great way to hike the Kinsmans! I'll need to try it this way sometime, rather than up from Franconia Notch. The pictures are beautiful and now I want to hike more than ever, but family and a hurricane will delay that until next week sometime, or at least until they open the WMNF again (closed from Sat. evening to Monday or so).

SUMMERSET: Thanks for your comments! Hey, if you should ever decide to hike the Kinsmans starting at the Reel Brook Trail and exiting at the Mt. Kinsman Trail, please feel free to contact me if you need transportation between the two trailheads.
No promises, but most likely either my wife or I could make provisions with a bit of prior notice.

Thanks so much for the carspot offer! I really appreciate that, as I'd most likely make this trek by myself.