Many folks would agree that sometimes it's fun to simply meander with no particular destination in mind.  One of my favorite spots for some impromptu roaming is the vicinity of the little mountain named North Sugarloaf (2,310 ft), which is located in the Zealand Valley area of New Hampshire.

As anyone knows who has hiked to North Sugarloaf (or to nearby Middle Sugarloaf), for minimal effort, both of these little mountaintops provide some very nice views, particularly toward the Presidential Range. 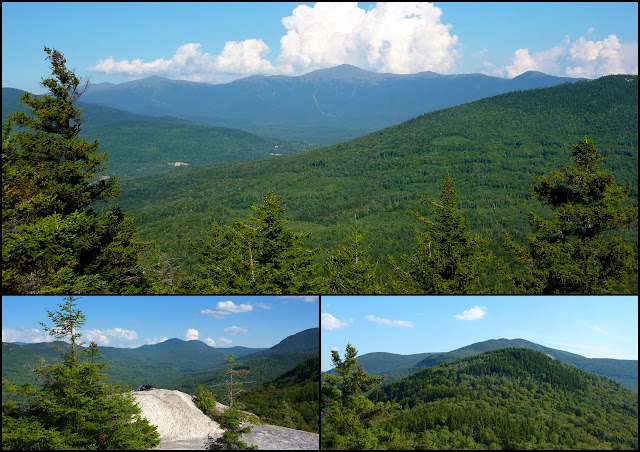 The views are certainly one component of why I consider North Sugarloaf as one of my favorite spots to visit.   However, another element pertains to its close proximity to my home in Bethlehem.  In less than an hour (including driving time), I can be atop North Sugarloaf!

From various wanderings over the years, I've discovered different ways of visiting this "neighbor" of mine.  There is, of course, the conventional hiking trail.  And then, there are other ways of getting there via a combination of snowmobile trails and snippets of abandoned trail, and even bushwhacking.  And perhaps best of all, and most important, all my ramblings are on public land! 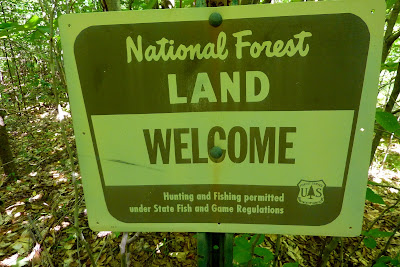 On a recent rambling, I followed a portion of a popular snowmobile trail that traverses a corridor along the north side of North Sugarloaf.  This trail eventually comes to a "T" junction near the Zealand River.  If you make a right at the "T" and follow this trail southward along the Zealand River you eventually intersect the hiking path known as the Trestle Trail.  But, if you make a left at the "T", then an older snowmobile trail eventually leads you along the south bank of the Ammonoosuc River.

It is so odd how sometimes one thing will lead to another.  I mentioned my trek along the snowmobile trail to my friend Joanne who is a hiker, a librarian, and someone who has a deep interest in White Mountain history.  With little effort, Joanne came up with several references via GoogleBooks which contained photos and detailed information about an old auto/carriage road that once ran along the south bank of the Ammonoosuc River (in the general vicinity between Twin Mountain and the current-day Zealand Road), and eventually terminated at Fabyans.  It's nearly certain that the snowmobile trail closely follows the corridor of this old road (known as the Glacial Ridge Road) that was built in the very early 1900s!
(NOTE: At the end of this Blog report are links to several articles that Joanne uncovered.)

Using photos publically available in the articles that Joanne found, I was able to roughly match up some of those old photos with snapshots I'd taken during my meanderings.  One such "match-up" relates to a spot where a side-hill cut was required to construct the road. For the next "match-up" photo (shown below), you'll need to use your imagination!  Although the river is immediately to the left of where I took my photo, it is not visible in my snapshot.  For one thing, the trees have grown up along the river bank over the years; whereas the view is more open in the vintage photo. Also, I'm uncertain if I was standing in the same spot where the vintage photo was taken.  When I next visit this location, I might be able to get a better "match-up" by better positioning myself.  We'll see! 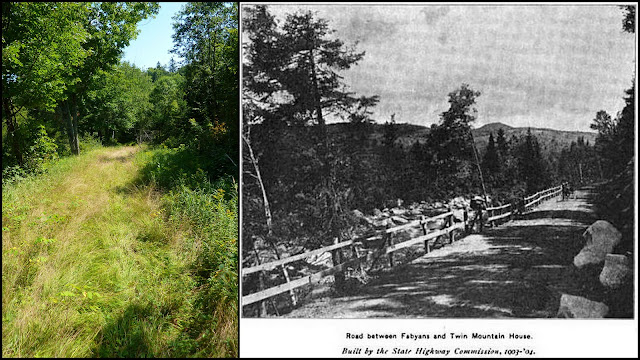 It's easy to understand why a roadway would have been constructed in this location.  It is so picturesque, even today!  Although trees have grown up along the river bank which block many of the views that once were present, you can still find a few open spots that are quite scenic in my opinion.  Shown below are a couple of snapshots. 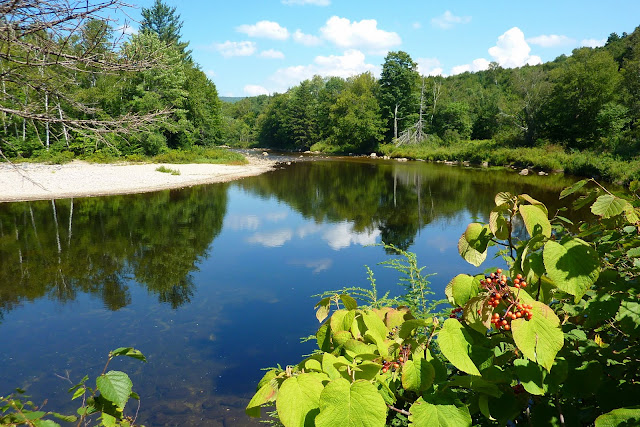 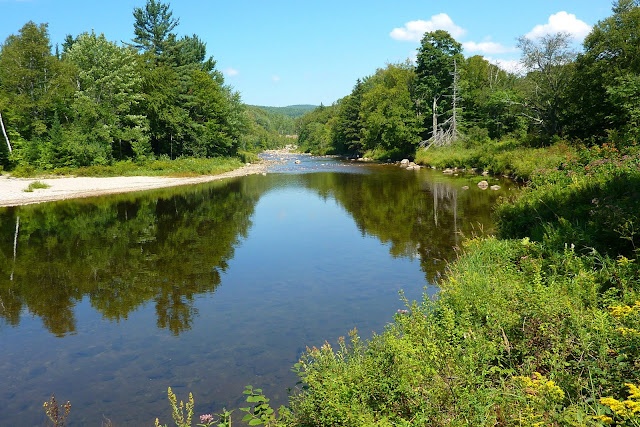 To sum it up, my recent meanderings had some surprising consequences!  It was awesome to learn about the history of the old roadway that once ran along the south bank of the Ammonoosuc River.   In addition, I gained some additional knowledge about how the old and the current snowmobile trails interconnect in the area around North Sugarloaf.  By using these snowmobile trails (in combination with conventional hiking trails) I can now hike to North Sugarloaf by doing a 4+ mile loop.   This loop is nearly twice as long as other "non-loop" routes I've used.  However, it provides a terrific option when I want more of a physical workout to reach one of my favorite destinations.

As mentioned earlier, here are some references that my friend Joanne uncovered relative to the old auto/carriage road that once ran along the south bank of the Ammonoosuc River (in the general vicinity between Twin Mountain and the current-day Zealand Road) and eventually terminated at Fabyans.

Very interesting - as you know, I love those old photos and being able to match them up with the terrain as it is today is pretty neat.

OWEN: Thank you! It’s terrific to know that you enjoyed the Blog report. Regarding the ”historical backdrop”, we have my friend Joanne to thank for that! This particular snowmobile trail had a different and special feel to it, even before Joanne was kind enough to provide me with the historical significance of this corridor.

SUMMERSET: It is indeed “pretty neat” when old photos can be matched up with conditions as they now exist. Regardless of whether it is me or someone else doing the match-ups, it provides a link with the past which I find to be very fascinating.