No, I didn't get lost, nor were any problems encountered which caused me to take a long route to Mt. Garfield.  It was done purposely!   You need to understand that my wife and I share a car, and that this hike was done on a Wednesday (17-Aug-2011). On most Wednesdays, she needs the car which means I rarely do hikes of any significance on that particular day.  However, the weather this past Wednesday was so beautiful.  I simply had to find a way to go hiking!!

Since we live in Bethlehem, the trailheads for the Skookumchuck and the Garfield Trail are just minutes away.  So, my wife agreed to leave me off at the Skookcumchuck Trail in the morning, and then pick me up at the Garfield Trail later in the day.  This enabled her to do her business, and it enabled me to hike.  A marriage made in heaven!

Before deciding upon this plan, I considered doing this route in the opposite direction.  However, some quick calculations showed that the elevation gain was about 200 ft less to do a Skookumchuck-Garfield route, versus a Garfield-Skookumchuck route.   I'd also considered just doing a simple trek up to Mt. Garfield via the Garfield Trail and returning via the same route.  That scenario would have been 2 miles shorter (10 miles versus 12 miles), and about 1,200 ft less elevation gain.  However,  the prospect of ascending and descending via the same route seemed rather boring!  Especially since the Garfield Trail is 4.8 miles long with little to see other than the surrounding woods.

Okay, that's enough about the background to this hike.  So, here are some details about the hike itself!  It took just a bit over 2 hours to hike up the Skookumchuck to the Garfield Ridge.  After a viewless hike up the trail through the trees, it's always quite dramatic to pop out onto a treeless ridgeline with stunning vistas! 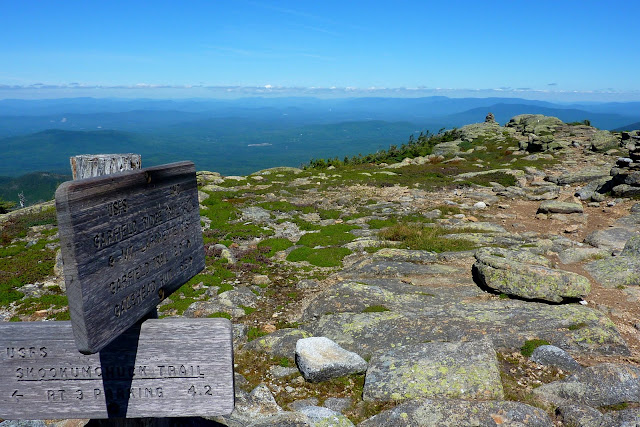 There are so many truly excellent views from the point where the Skookumchuck intersects the Garfield Ridge Trail.  I think some of the vistas are comparable to those from Mt. Lafayette (0.8 mile to the south).  One such vista is shown in the photo below that includes the Presidential Range, the Twin-Bond Range, and Mt. Carrigain. 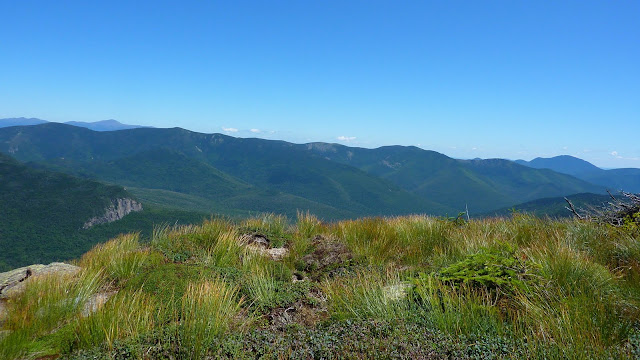 There is also a view toward Cannon Mountain (photo below), but this is a case where the summit of Mt. Lafayette definitely has a view that is better. 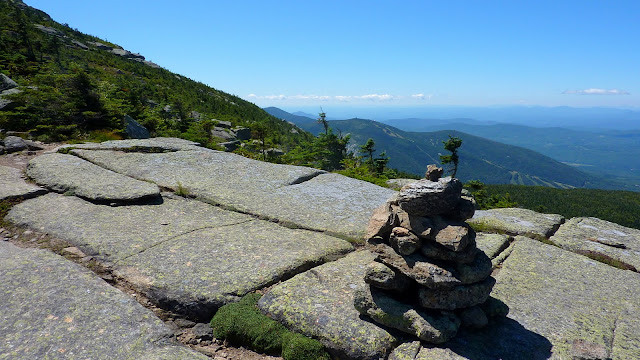 After taking a snack break at the point where I popped out onto the ridgeline, it was time to begin my 2.7 mile trek northward to Mt. Garfield via the Garfield Ridge Trail.  This trail has been in existence for nearly 100 years, and it's part of the Appalachian Trail.   And so, I'd guess that thousands of hikers (possibly tens of thousands) have travelled this segment of trail over the years.  Although I've hiked other portions of the Garfield Ridge Trail, this particular segment was brand new for me!

Before starting out, I snapped a photo (shown below) of my destination. Mt. Garfield is of course the pointed mountain in the center of the frame with a huge cliff on the right side of its base. 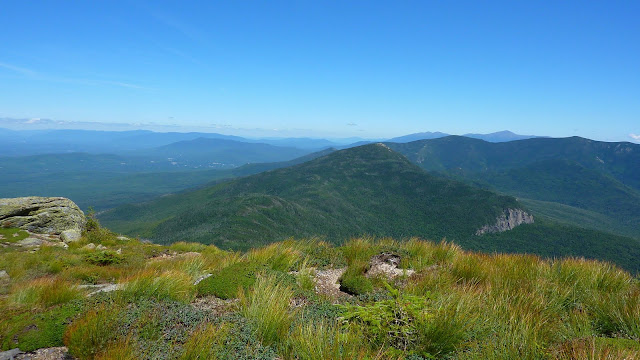 Speaking of the huge cliff at the base of Mt. Garfield, there was a spot along the Garfield Ridge Trail where  I was able to get a closer view of it (photo below). 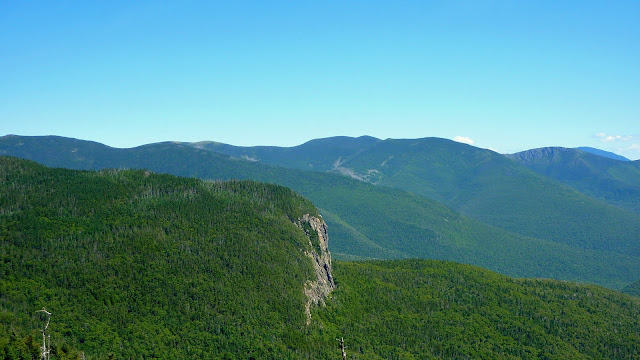 At another spot en route to Mt. Garfield, I was able to look back at a portion of the ridgeline that I had descended along the way (photo below). 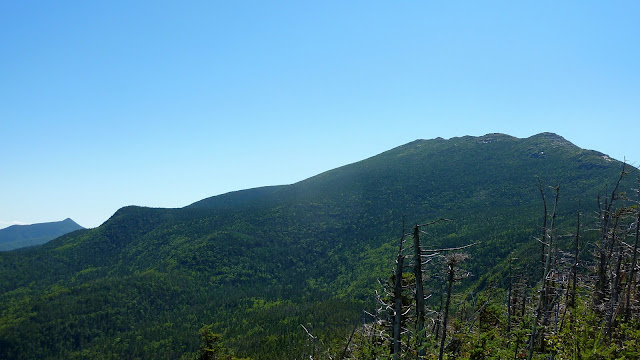 And last, but not least, my trek over to Mt. Garfield also provided me with the opportunity to visit Garfield Pond, which is only about 150 ft off the Garfield Ridge Trail.  I took one of the many herd paths that lead down to the pond.  This was another first for me!  I'd never visited this particular pond.   One of the many snapshots I took is shown in the next photo. 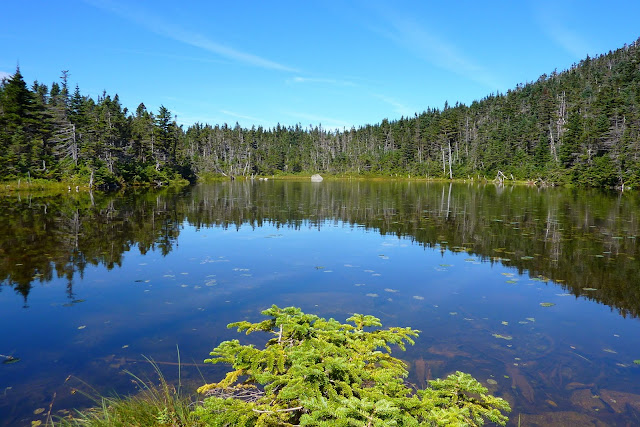 After thoroughly enjoying my visit at the pond, the climb to the top of Mt. Garfield began in earnest. I was uncertain how intense or steep the ascent might be from this direction.  What a very pleasant surprise!  It was neither intense nor overly steep!

The 360 degree views from Mt. Garfield are superb.  The vistas that I find most appealing are those looking into the Pemigewasset Wilderness.  One of my favorites is the scene of Owl's Head (center of next photo) just sitting out there in the middle of the Wilderness all alone! 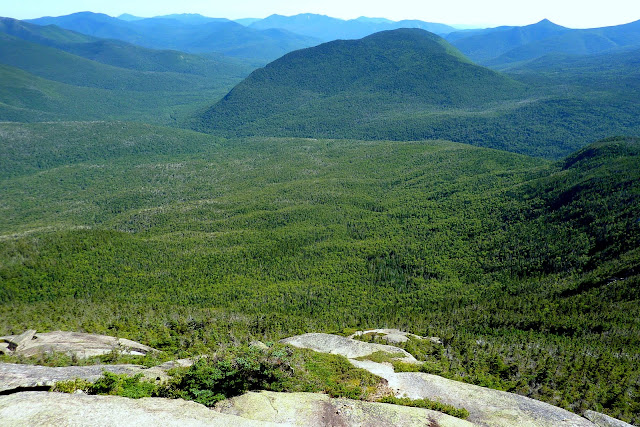 Another favorite is the view of Mt. Guyot and the Bonds (next photo). 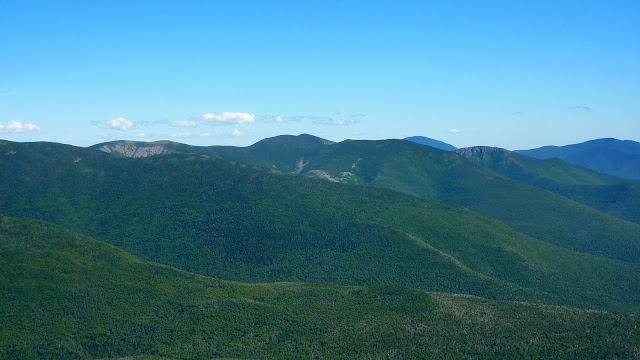 Further regarding the view shown above, just for the fun of it, I took a photo (shown below) from the ruins of the fire tower atop Mt. Garfield.  I was trying to capture some semblance of how the view might have looked from inside the tower.  My attempt at replicating a view from inside the fire tower was a bit laughable.  But nonetheless, the next photo shows what I got! 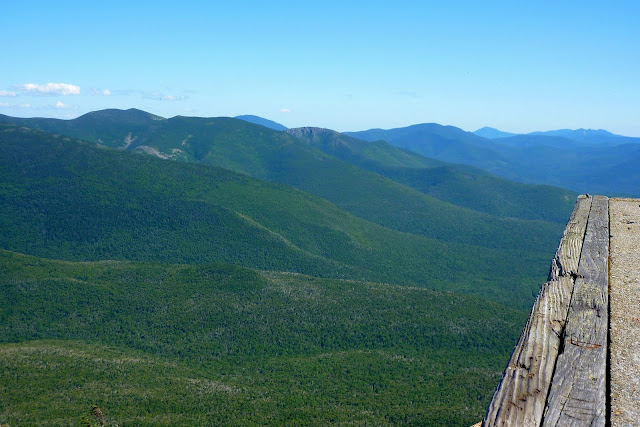 The view looking southward along the Franconia Range is another vista from Mt. Garfield that I particularly like.  However, the angle of the sun was such that I was unable to get a really good photo.  After trying several adjustments with my simple "point and shoot" camera, the snapshot shown below is the best I could do. 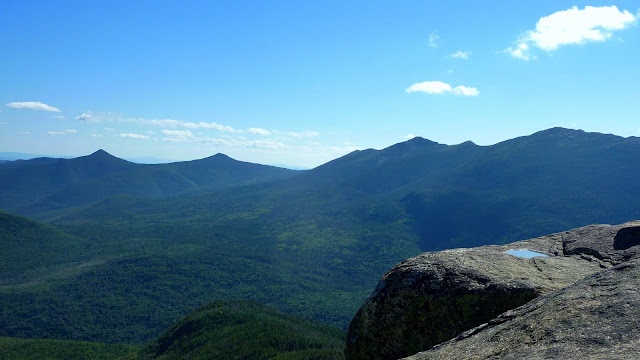 After hanging out on the summit for about half and hour, I began my long trek down the Garfield Trail.  It took just over 2 hours to descend the nearly 5 mile trek to the trailhead.  Overall, the entire round-trip took just a bit over 7.5 hours, which includes stops along the way for photos, snacks, and a short side-trip to Garfield Pond.

To sum it up, this was a truly terrific day to be hiking!  And, this trek was especially awesome since it involved two "firsts" for me, i.e. visiting Garfield Pond, plus hiking a segment of the Garfield Ridge Trail that was new to me.
Posted by 1HappyHiker at 4:41 PM

Wasn't 8/17 a great day for being up on a ridge? You chose a cool route. Great photos.

Years ago there was an obscure side path near the top of the big hump between Lafayette and Garfield that led to a stunning view over the western Pemi. When I was last there in '98 the side path was heavily overgrown, and I suspect it may be even less discernible now. Did you see any sign of it? I'm thinking it's time to remove mention of it from the WMG.

STEVE: Yes indeed, 8/17 was a great day for being up on a ridge!! Hopefully, you were on one, or at some other spot with a good view. The vistas were nearly endless on that particular day!

Regarding the side path that you mentioned, I found a side path that I think meets your description. But regardless of whether it’s the same side path, the one I found was heavily overgrown. A worn treadway was faintly discernable by intently looking down through the thick scrub. I followed this very faint pathway until it came to an abrupt end about 25 ft or so after leaving the trail. There were indeed some very nice views over the western Pemi. I took several snapshots from that spot. And actually, the fifth photo in my Blog report was taken from there. It’s the snapshot showing the close-up view of the huge cliff at the base of Mt. Garfield.

Most likely, the faint path that I found, and the one you inquired about are one and the same. Regarding removing mention of it from the WMG, it’s just my opinion, but since the path is now so overgrown, I think that a majority of hikers would find it difficult to locate.

Thanks, John! I spent 8/17 along the Webster Cliffs and Mt. Jackson. Endless vistas, indeed!

Thank you John, it is a nice way to do Garfield and your photos are very nice.
I like very much Skookumchuck. One day, Steve suggested me to take it to do Lafayette and I liked it very much.

STEVE: We came close to having a surprise meeting on 17-August. One of the possible hike scenarios I was considering was a loop involving Mt. Jackson and Mt. Webster!

YVON: Thank you for your response and kind words! It is good to read that you also are a Skookumchuck Trail enthusiast! That trail provides a very nice alternative for ascending or descending from the Garfield Ridge. It's also a useful trail for constructing a loop hike over Mt. Lafayette, using the Franconia Notch bike path to connect the departure/arrival trailheads.

I'll chime in and agree that 8-17 was an incredible day to be on the trails! I'd been contemplating a hike to Garfield all summer and almost chose it for 8-17, but ended up on Moriah instead. Great blog entry...I've always been interested in those cliffs on Garfield. Do you know if they are at all accessible?

OWEN: Regarding those cliffs near the base of Mt. Garfield, I’ve never been there, but I seem to recall hearing or reading about someone who managed to get out on top of them via a difficult southward bushwhack beginning somewhere in the vicinity of Garfield Pond. But, I could be wrong about this!

Hey, congratulations on your recent completion of #18 in your NH48 quest! I just read about it on your Blog (http://opw9010.blogspot.com)

Any cliff that is visible from popular peaks like Lafayette has been not only visited but climbed, both summer and winter. Usual access route to the base is from 13 Falls - apparently there's an old logging road that helps with part of the approach- but other routes have been used, e.g. a traverse from the col east of Garfield (top of Franconia Brook trail - follow the 3400' contour).

Thanks Nartreb!
It sounds like you might have visited the cliff, or at least, given it some consideration?

Lucky you - what a great day! I have some similar photos from the Pemi loop I did last year. My favorite is the last one looking back to the Franconia ridge. I printed my photo onto fabric and made a mini quilt out of it to commemorate the hike.

You're making me homesick with the great photos. I'll be home from vacation tomorrow and while I can see the mountains of VA from the car, they are not the same as the Whites at home. I can't wait to get back on the trails!

SUMMERSET: You are one talented person! Printing your photo of the Franconia Ridge onto fabric and then making a mini quilt is such a terrific idea for commemorating a memorable hike!

Also, I can relate to your statement about seeing the mountains of VA from your car. Every year, my wife and I make a drive down south through VA to visit family in NC. I know EXACTLY what you mean. Yes, they are mountains, but they are NOT the White Mountains . . . huge difference!!

Beautiful photos, John - especially the side shots of Garfield! Perfect report to read on a rainy day after being cooped up for a few weeks. Thanks for sharing!