This was an adventure that was completely unplanned!  It all began innocently enough when we decided to take some visiting family members on a tour of northern New Hampshire (far above the notches).  On previous visits they had already been exposed to sightseeing expeditions to scenic locations in the Crawford, Franconia, and Pinkham Notch.
As we were en route to these northern locations, the question was asked as to how far we were from Canada.  We did some quick mental mileage estimates and said: "It's really not that far".  Well, one thing led to another, and we eventually ended up heading for the border!  We knew that we couldn't actually cross the border since no one had come prepared with the required documents to do so.
I had recalled reading a description of a trail that skirted along the U.S./Canadian border and eventually led to the Fourth Connecticut Lake.  Spurred on by this recollection, we continued northward with great gusto!  We completely ignored a sign saying to TURN AROUND HERE if you were not intending to cross the border.   Upon reaching the border crossing, I pulled the car off the side of the road and walked up to a point slightly to one side of the border crossing booth.  I was greeted by an agent who immediately asked if we had come to hike the trail to the Fourth Connecticut Lake (how did he know that??).
The agent pointed to the spot where I should park the car.  He further indicated that once parked, we should walk up the northbound lane of the highway, go past the agent's booth, and then immediately veer left off the road onto the trail.  Oh!  And he also said that I was standing in a hard-hat construction zone and should move to my right to ask him any further questions!!
Shown below is a map which I grabbed from an Internet website after returning home.  It shows the location of the trail, plus it has a few other things labeled, such as where to park, etc. (Clicking on the map will slightly enlarge it.) 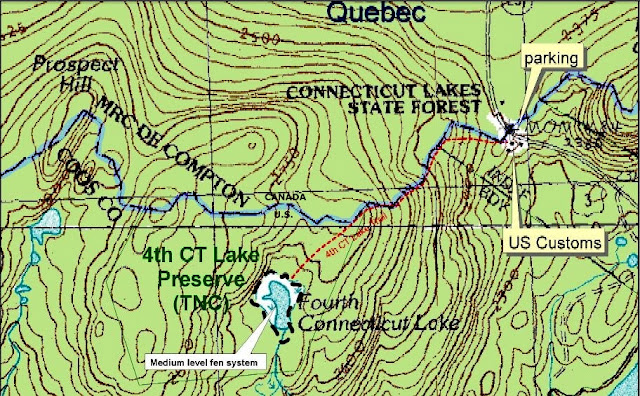 You will undoubtedly note that one of the labels on this map states that the Fourth Connecticut Lake is a "Medium level fen system".  I won't bore you with the technicalities of this term, but if you want to read more about it, then please click HERE.  On a less technical note, the Fourth Connecticut Lake (elevation 2,670 feet) is the beginning of the Connecticut River, which is New England’s longest river.
Okay, to get to the trailhead for the Fourth Connecticut Lake hiking trail, you need to take U.S. Route 3 and drive 22 miles north of the village of Pittsburg to the U.S./Canada border. You park on the east side of Route 3 near the U.S. Customs station.  The trail is just beyond the station and heads off to your left (west) along the U.S./Canada border.
Shown below is a photo collage that shows the U.S. Customs station from a viewpoint along the hiking trail.  It also shows the spot where both the U.S. and Canadian flags are flown, which is in close proximity to where you veer left onto the trail. 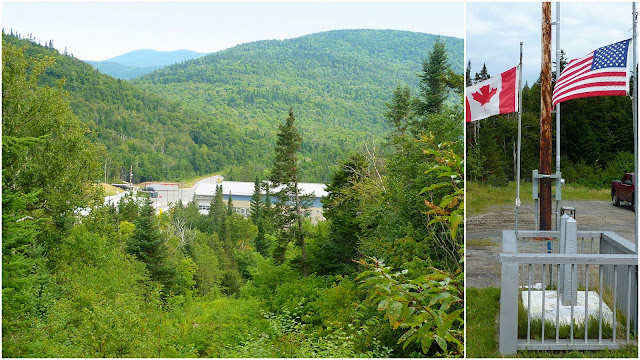 To my mind, one of the more unusual aspects of this hike is that the U.S./Canadian border runs down the center of the trail corridor in several spots.  You can actually stand with one foot in the U.S. and the other foot in Canada.  The composite photo below shows an example of one of the boundary markers along the trail's treadway, as well as a boundary marker tacked to a tree. 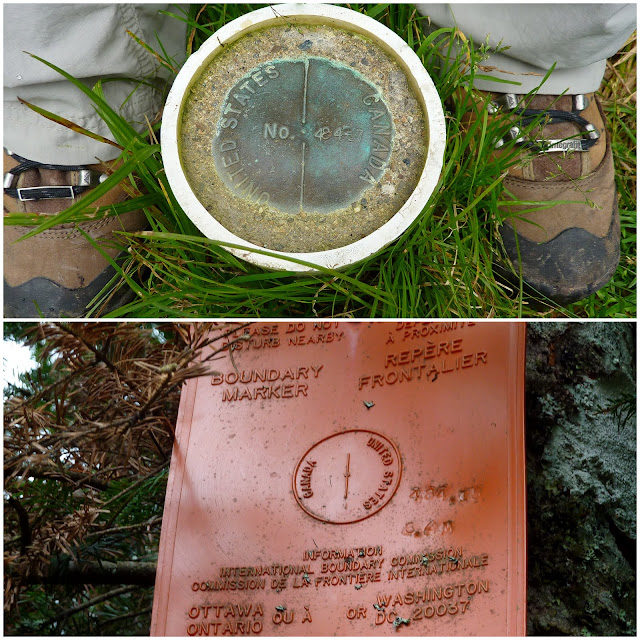 There are some minor inconsistencies between various guidebook descriptions in terms of the total mileage for this hike.  However, a brochure published by the New Hampshire Chapter of the Nature Conservancy lists the round-trip mileage as 1.7 miles (0.6 mile from the trailhead to reach a 0.5 mile loop trail around the lake, plus the 0.6 mile return to the trailhead).  The Nature Conservancy's brochure can be accessed by clicking HERE.
The Nature Conservancy does a great job of maintaining this trail.   There are some segments that are surprisingly steep and rocky, and there are other segments that are generally flat.  Also, some segments are boggy, but the boggiest areas generally have bog bridges that are in good shape.  The trail is easy to follow, and it appears that much of the signage is relatively new.  Shown below is a collage of a few of the signs along the way. 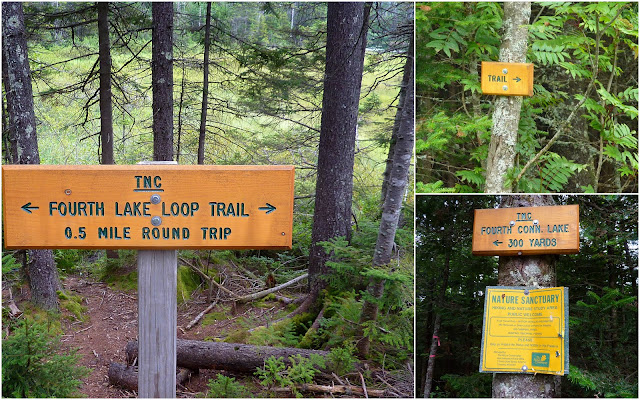 You will also encounter a few other signs here and there which indicate where there are parcels of private land.  Interestingly, all those signs are in French.  But, even if you are unfamiliar with the French language, most likely you would surmise that you are unwelcome to go beyond those signs!  Shown below are a few examples of those signs. 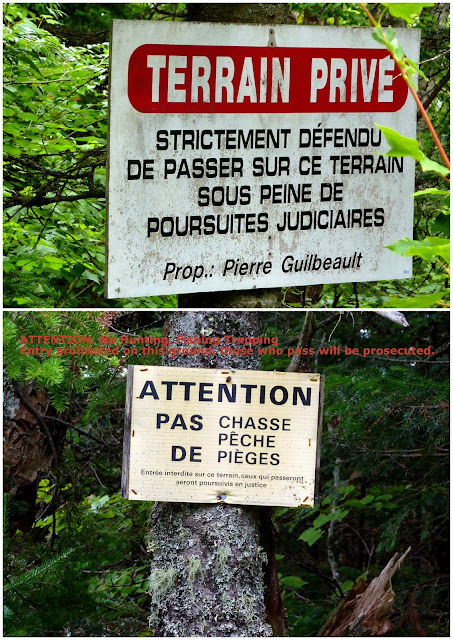 As indicated earlier, the trail is very easy to follow.   This is despite the waist-high undergrowth that lines large segments of the trail corridor.  It's just my opinion, but  think the undergrowth adds a sense of wildness and a certain ambiance (or should I say a certain "je ne sais quoi")!  Shown below is a composite photo showing some of the trailside scenes that I'm referring to. 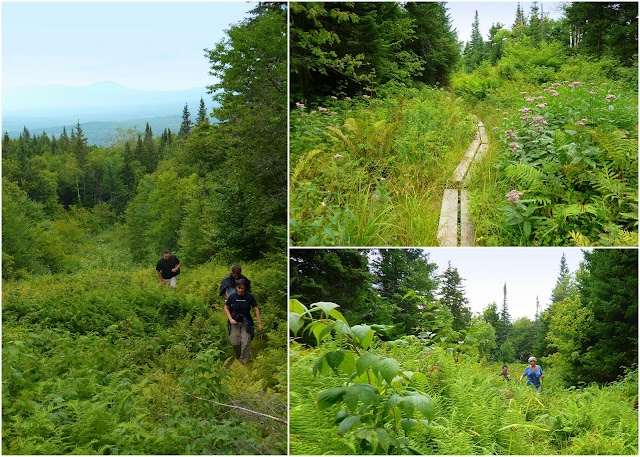 Besides the trailside scenery, there are also distant vistas of nearby mountains to enjoy.  Shown below is one such vista. 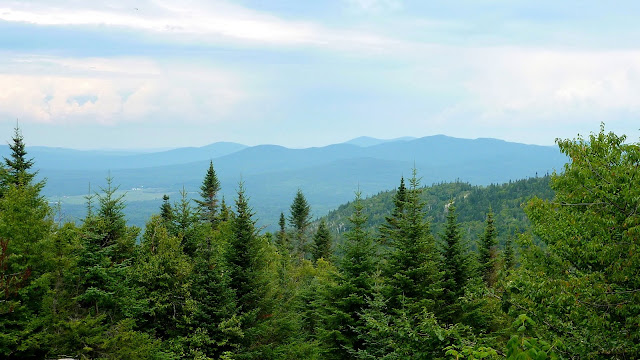 After about 30 minutes or less of hiking, the Fourth Connecticut Lake comes into view   I find it difficult to capture the true essence of places such as this in a photograph.  Perhaps the snapshot below appears to show nothing more than a glorified swamp.  However, when there in-person, there is a definite beauty to this remote spot.   And, at the risk of sounding overly poetic, the remoteness seems to saturate your inner being as you stand there along its shoreline. 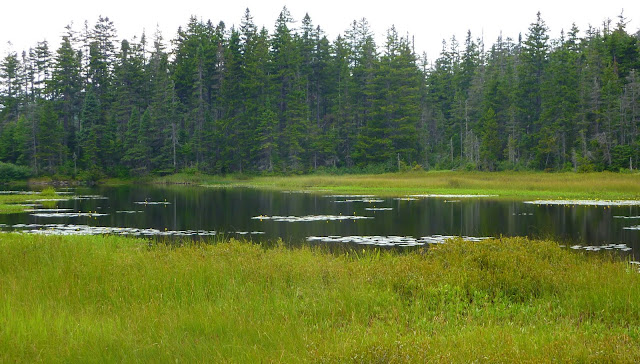 There were definite signs of moose activity in the area, however we saw no 4-footed wildlife on our trek.  Although not nearly as dramatic as a moose-sighting, we did spot some other forms of "wildlife" in the form of wildflowers and insects (quite often they were paired with each other). Take a look a the composite photo below.  On the far left is a deep-pink wildflower where a yellow crab spider was partially hidden (center of photo).  Then on the upper right photo is a tiny insect (possibly a mosquito) taking a siesta on a white Turtlehead flower.  And then on the bottom right photo is a busy bee at work. (Clicking on this photo will slightly enlarge it.) 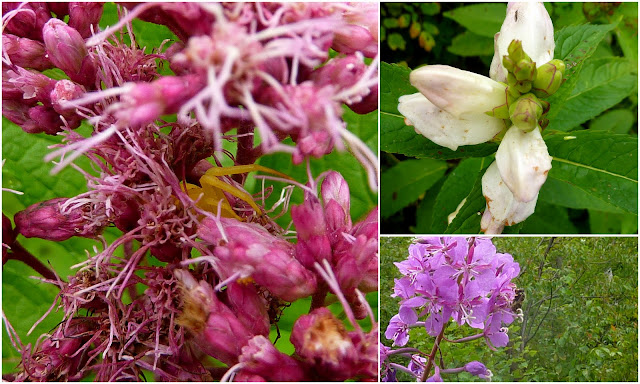 As enjoyable as this adventure was, let's face it, it is a very LONG drive up there for most folks.  This hike would be a nice side trip if you were travelling to/from Canada.   Another option to make this long drive worthwhile would be to preplan some other hikes in the general vicinity, such as Mt. Magalloway, and/or something in the Dixville Notch (Table Rock, etc).  Or, you could do as we did, i.e. simply doing some sightseeing of picturesque roadside settings like the Balsams Resort (photo below). 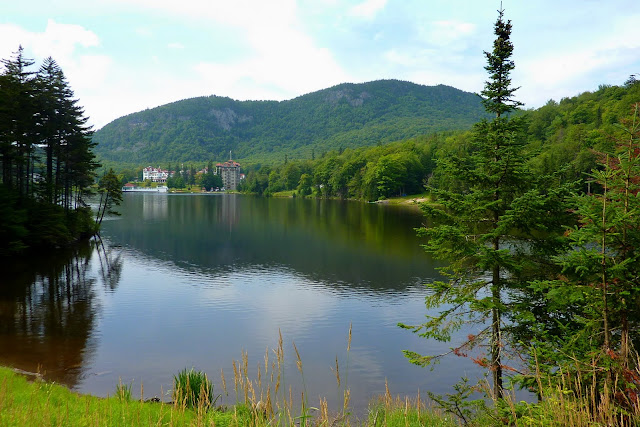 To sum it up, this hike along the Canadian border was a complete surprise to our family members, and to us!  It was totally unplanned.  Sometimes, surprises can be pleasant, and this was definitely one of those times.

Thank you for this blog posting. Going to hike the 4th next week. This was very helpful. Would you recommend long pants?

It's probably a matter of personal choice. As you can see from some of the photos, there is some underbrush along certain segments of this trail. I prefer long pants for this type of environment, but that's just me! :-)

I went here in August of 2012 on purpose. It is a very nice hike. Thank you for the post with the pictures. My mother also enjoyed it, she was unable to get up the trail due to her fear of heights and this softened the blow a little.

Thank you for taking time to post your comments. It’s very rewarding to read that the photos helped to compensate for your mother being unable to hike the trail.