Hiking in New Hampshire in the Aftermath of Hurricane Irene

Under the Trail Adopter programs of the White Mountain National Forest (WMNF),  and the Appalachian Mountain Club (AMC), I have volunteered to maintain five hiking trails.   It might potentially be of interest to some to learn what I've recently experienced while doing maintenance on three of these five trails in the aftermath of Hurricane Irene.  The three trails are as follows:

On 30-August, I hiked the aforementioned route.  Other than a few minor blowdowns, there was amazingly barely a twig that was out of place!  Most importantly, there was no evidence of trail erosion.  All 40+ of my water bars held up great!  The only minor erosion was on the west side of the suspension bridge that crosses the Peabody River.  Here, there is evidence to suggest that the river "jumped" its banks.   Actually, I even saw a dead fish ON THE TRAIL just a few feet from the suspension bridge!  Over my many years of hiking, this was the first time I'd ever encountered a fish in the middle of a hiking trail!  (In the next photo, the fish can be seen at the bottom center of the snapshot.) 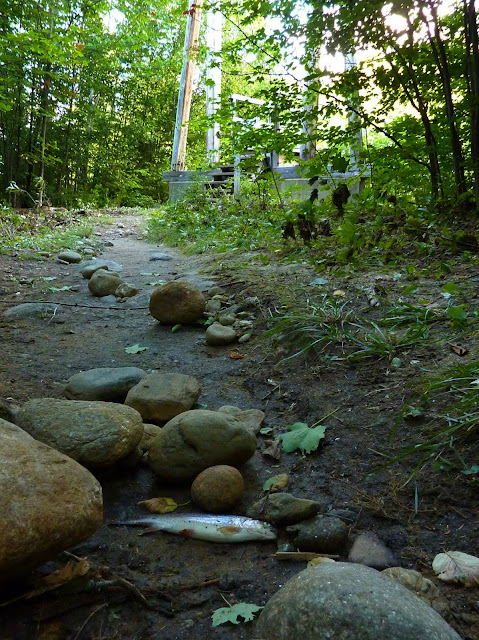 Since there were so few issues to address on this maintenance mission,  I did a short "add-on" to my normal route.  I easily crossed Parapet Brook,  and then hiked a short (maybe 0.1 mile) segment of the Madison Gulf Trail (northbound).  There were no issues along this short segment.

Next, I had just begun to hike a short portion of the westbound Great Gulf Trail (beyond the junction with the northbound Madison Gulf Trail).  I soon met a hiker who indicated that he had just returned from a hike on the Great Gulf Trail up to the junction with the Wamsutta Trail.  He said he had encountered negligible problems, and had turned around only because he couldn't safely cross the West Branch Peabody to access the Six Husbands Trail!

Although the water level in the area's rivers was still a bit high (especially for August), the rivers were flowing well within their banks.  Shown below is a snapshot of the Peabody River taken from the Great Gulf Trail suspension bridge. 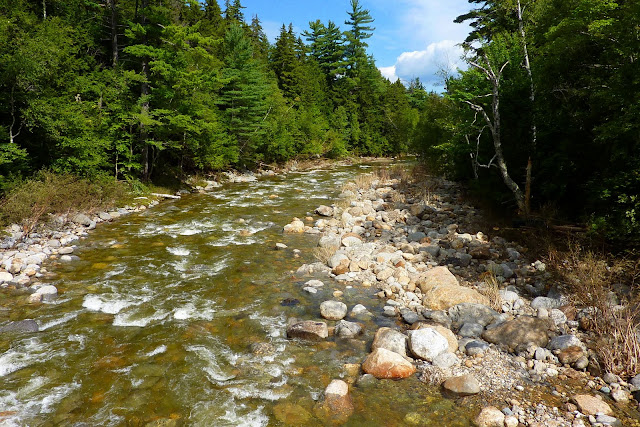 AMMONOOSUC-AROUND-THE-LAKE TRAIL:  For this hiking trail, there are two wooden bridges over a brook.  Neither bridge was washed away as a result of the hurricane.  The only spot along this trail where there was some evidence of storm-related erosion was near one of the bridge abutments.  It appeared that the brook had "jumped" its banks and washed away some surrounding soil.

There was one major blowdown.  However (for whatever reason) this is pretty much the norm for this short 1.2 mile trail.  Each time I do maintenance on this trail, there is usually at least one fallen tree to be removed!  The photo below is a composite which shows the blowdown blocking the trail, and then the trail as it appeared after the blowdown was removed. 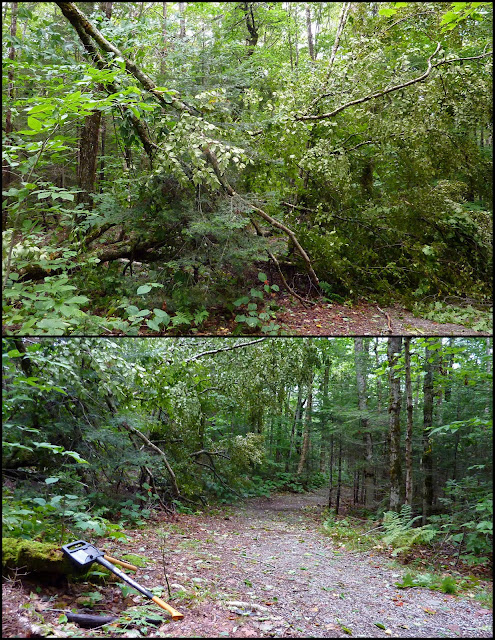 I  want to extend my appreciation for the excellent trail-hardening work that has recently been done on this trail (see photo below).  Your hard work has paid off!  Even with the amount of rain produced by Hurricane Irene, the places along this trail that normally would have been very muddy were only slightly muddy.  Job well done! 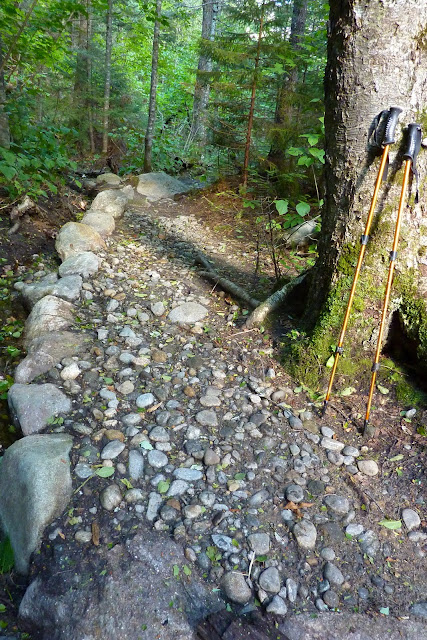 Later this week, I’m hoping to assess one of my other adopted trails by hiking up the Cherry Mountain Trail (from Rt. 115) in order to access the Martha’s Mile Trail.  After that, I'll just have one more of my adopted trails to check out, i.e. the Mt. Tremont Trail.  Accessing this trail might be tricky due to the highway washout issues along Rt. 302!


Other reports indicate that there has been significant damage to some of the trails, as well as to some of the roads used for accessing trailheads.  Shown below is a link which provides useful information relative to trails and roads.
http://www.fs.fed.us/r9/forests/white_mountain/conditions/

Nice work. It is a relief to check things out. Funny how attached I've become to my trail. I had a full day on the Piper trail. 30 drainages and 10 blowdowns. Most drainages working as they should but some moderate erosion up high (partial wash outs, not blowouts).

Thanks Chris! And talk about “nice work”! It sounds like you did some “nice work” yourself on the Piper Trail.

It’s great news that your drainages worked so well! Were your 10 blowdowns overall minor, or sort of mix of major and minor? The blowdowns I’ve experienced thus far have been pretty much what I’d characterize as relatively minor since none have taken a great deal of time to remove.

Everything looks good, well, except for that fish! I was just out this morning in Franconia Notch; Lonesome Lake to Kinsman Ridge to Cannon and then looped down Hi Cannon and other than a lot of green leaves on the ground, things looked pretty normal there. There was a little bit of trail erosion here and there, but nothing out of the ordinary.

Summerset, thank you for reporting some more good news regarding the status of the trails in the aftermath of Hurricane Irene. Although some trails have suffered some significant erosion issues, hopefully the vast majority of the trails in the Whites will be found to be relatively unscathed!

I would say most were major - either large enough to take some time or required two cuts (one on each end). Mostly old trees just waiting for the right time to fall!

Trails I wonder about are the ones that follow rivers and are hanging on by the tips of their fingers to steep sidehill terrain such as 19 Mile Brook and Dry River. I also wonder if new Dry River Bridge made it through the storm unscathed. Dry River must have been unreal! I bet a lot of trees were sent down the river and maybe into the bridge such as happened at Blair Bridge in Campton.

Oh yeah... that is a nice example of trail hardening. All it takes is a couple of 5-gallon buckets and spades and source of materials not too far away. We happened to pass by the crew who was hauling sand & gravel to cribs they built on Zealand Trail. That project also came out 100X improved over the 1/4 mile of twisted roots it was. That 1/4 mile used to seem like it was 3/4 of mile.

JAZZBO: Ray, thank you for taking a moment to respond with some very insightful questions and comments relative to the aftermath of Hurricane Irene. It's going to be very interesting to read the Trail Conditions Reports as they are posted over the next few days and weeks to come. As you suggest, those trails that follow brooks and rivers are the ones that are most likely to have suffered the most damage. Thankfully, we were spared from high winds which could have delivered a "knock-out" punch to many other trails!

I have 8 year old boys (yep twins) looking for a backcountry camping trip. I was thinking of OSGOOD tent site. How hard of a hike is it? How crowded does the campsite get? Other recommendations?

ANONYMOUS: Well, first of all, I think it’s absolutely terrific that you’ll be taking your twin boys out on a backcountry camping trip!

_ Regarding the hike to the Osgood Tentsite, I think you and your boys would find it to be a relatively easy 2.6 mile trek.

_ Regarding how crowded it gets, I have no personal experience with camping there. All I can say with any degree of certainty is that it is a very popular site, and it is located on the Appalachian Trail.

_ Regarding other recommendations, a better resource than me would be Steve Smith at the Mountain Wanderer Bookstore in Lincoln, NH. He is a fountain of knowledge about most anything having to do with the White Mountains. He can be reached by phone at: 603-745-2594. Or, you can E-mail him at: info@mountainwanderer.com. Or, even better yet, if your travels take you anywhere near his bookstore in Lincoln, you can drop by to chat with him in person. And while you’re there, you could look over his well-stocked selection of guide books and maps.

Thanks for the details. I will definitely go to Mountain Wanderer Bookstore the next time I'm in Lincoln.