Discoveries on a Hillside in Bethlehem, NH

Nearly a decade ago while wandering in the woodlands on the hillside above the current-day Maplewood Golf Course complex in Bethlehem, NH, I discovered the structure shown in the photo below. 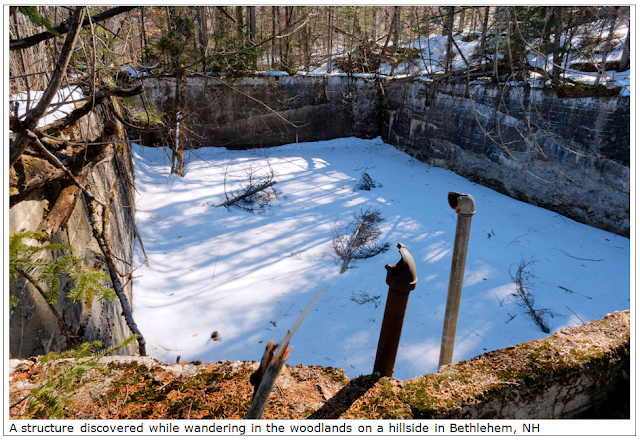 Over the years, I occasionally thought about this discovery.  However, I never aggressively tried to find it again since I didn’t have my GPS with me at time of the initial sighting, and was therefore uncertain as to the precise location of the structure.  But recently, I’ve developed an interest in LiDAR imagery.  By using that technology I was able to locate the structure, obtain its GPS coordinates, and then easily navigate to it.

Shown below is a LiDAR image with a red arrow pointing to the structure that was shown above in the first photo. 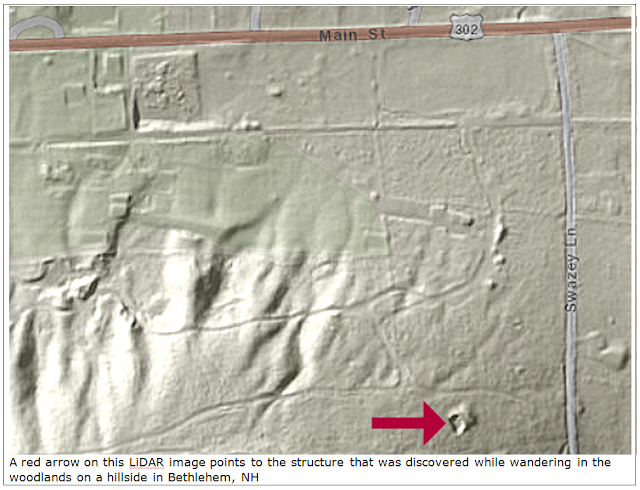 Located near to the structure shown above, was the old Maplewood Hotel, which was in existence from 1876 to 1963 when it was destroyed by fire.  Shown below is an old photo of this grand hotel during its glory days.

It’s possible that the structure I found might be the remains of a reservoir associated with the old Maplewood Hotel.  There are two pieces of evidence to support this notion, as shown in the two images shown below.
_ The FIRST image is an old map from 1890 that shows a reservoir located at a spot that closely coincides with the location of the structure that I found.
_ The SECOND image is a clipping from an article on page 12 of the 28-Jun-1879 edition of the White Mountain Echo.   In the last sentence of this article, mention is made of the “extensive reservoirs on the adjoining hills”. 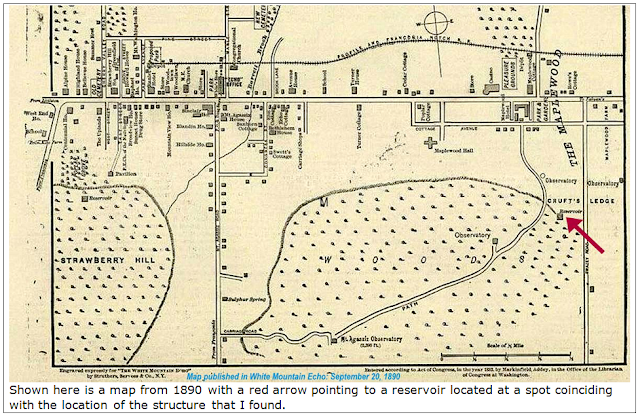 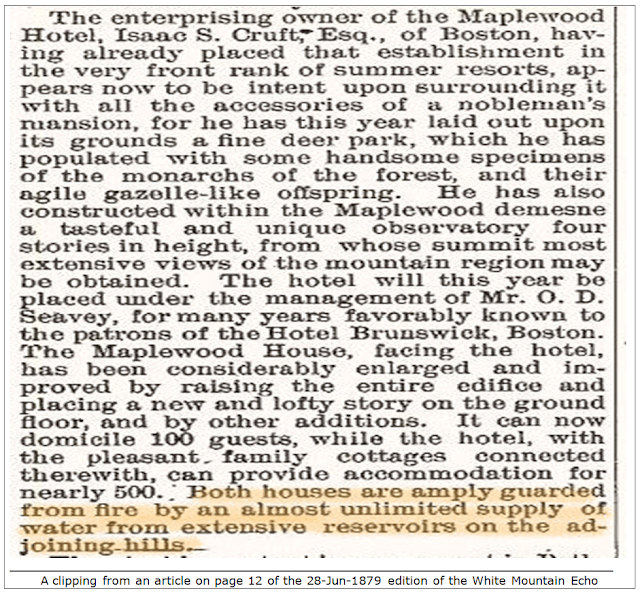 And as bonus, there was an unexpected “Part 2” to my recent wanderings and re-discovery of the structure described above!

Once upon a time, there was a popular hiking destination located on the hillside above the old Maplewood Hotel.  It was called Cruft’s Ledge and it provided magnificent views of the Presidential, Twin, and Franconia mountain ranges.   I have searched for this spot on several occasions, but never found it.  I had hopes that LiDAR data might be useful in locating this spot.   But once again, no luck!  HOWEVER, during my search, I unexpectedly came across an old logging cut that provided a view of the Presidential Range that is seen in the photo below. 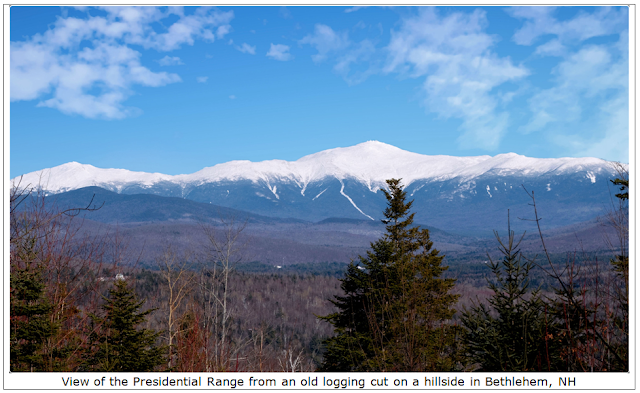 The old Maplewood Hotel sure was grand! Is it possible that the structure was a crude swimming pool which was filled with water diverted from the reservoirs? Just wondering.

I'm glad that you found an unexpected "Part 2" to your wanderings because the photo taken from the logging cut of the Presidential Range is magnificent!

Stay safe in this time of uncertainty.

First and foremost, I likewise want to extend my well-wishes to you and yours during this time of uncertainty.

Regarding the possibility of the structure discussed in this blog posting, like you, my first thoughts were that it had features suggestive of a swimming pool. However, that notion was pushed aside once I discovered the old map and vintage newspaper article that are shown in this blog posting. Also, although not mentioned in my blog, there are two other factors that seem to lessen the possibility of it being a swimming pool: 1) the structure is about 0.3 mile from the old hotel; the terrain surrounding the structure is extremely steep.

Thanks for the clarification about the "swimming pool", John.

I received an email the other day asking me to "subscribe" to your blog if I want your posts coming to my email. Did you send the email, or did Blogger send it? I want to make sure that the email is legit before I click on it. (It probably IS okay?)

Yeah, we're in uncertain times for sure. I don't think I'll be traveling much in the coming months, other than hiking locally. I'm sure you'll be doing that too. Be careful out there!