Because It’s There: The Col Between Mt. Tremont and Bartlett Haystack

During a speaking tour, the renowned mountaineer named George Mallory was asked why he wanted to scale Mt. Everest.  He is famously quoted as having replied with the retort: "Because it's there."

Some might rightfully ask why I would choose to hike to a seemingly insignificant destination such as the col between two mountains, namely Mt. Tremont and Bartlett Haystack.  Perhaps my first inclination would be to offer a response similar to George Mallory’s, i.e. “Because it’s there.”  And in truth, the col simply being “there” might easily have been enough incentive for me to visit this location. :-)  However in this particular case, there were other reasons for my decision to hike to such a peculiar destination.  I had three objectives which are described later in this report.

The round-trip mileage for this trek was about 4.5 miles with an elevation gain of about 1,500 ft.  My travel route involved a small segment (0.6 mile) of the Mt. Tremont Trail, plus a short bushwhack (0.4 mile) to reach an old logging road which was followed for slightly over a mile to the col between Mt. Tremont and Bartlett Haystack.  From the col two short bushwhacks were launched to separate ledges (one facing west, and the other facing southward).

My three objectives for this trek were as follows:

OBJECTIVE 1:  Determine the “follow-ability” of an old logging road leading to the col between Mt. Tremont and Bartlett Haystack.  On previous adventures to this col, I had come across the old logging road, but had only followed segments of it.

It was gratifying to discover on this trek that the old logging road is still follow-able.  Albeit, the corridor has become narrow in spots due to encroachment of trees and bushes.  Also, there are a few places where it is necessary to briefly leave the corridor to avoid a downed tree, or to work around an area that is muddy due to clogged drainage.

For future adventures, one never knows when it might come in handy to have this knowledge about the old logging road. :-)

OBJECTIVE 2: Make a return visit to two little ledges.  One ledge is  located at the north edge of the col, and the other is located on the east side of the col.

There’s not much to be said about this objective other than to say that my goal was met.  Both ledges were visited and I enjoyed the views from each.

To give some further perspective to these two ledges, I thought it might be helpful to include a photo taken a few years ago when I bushwhacked to the huge cliff on Mt. Tremont’s east end.  This older photo shows the two ledges that I visited on this July 2018 trek (see white labeling at left side of photo).

OBJECTIVE 3: Make a return visit to something that shows up on some topographic maps as a tiny body of water located at the trough of the col.

A) Previous Visits to This Location:

Okay, there is much to be said about this third objective.  I had visited this spot several years ago, once in the Springtime, and once during a particularly wet period in early November.  On both occasions, significant water was indeed present at this location.

For this current visit in late July 2018, conditions had been quite dry throughout the region for an extended period of time.  And so, I was curious to see if any water would be present during a prolonged dry spell.

Since there is no detectable inlet or outlet for this body of water, it has long been my suspicion that this is an ephemeral pool. These depressions typically only contain water during periods of snow melt, or during prolonged rainy periods, etc.

But, if this is indeed merely an ephemeral pool, then one might think that topographic maps would either totally ignore this landscape feature, or perhaps a mapping symbol might be used to depict it as a swampy area.  However, such is not the case!  Topographic maps in current-use depict this spot as being a small pond, i.e. a permanent feature on the landscape.

Of further interest is the fact that this body of water does NOT show up on any of the vintage topographic maps that are available for viewing online.  I suppose this could mean that it simply didn't exist when those maps were made.  Or, since aerial photography had yet to be invented, perhaps no one knew it was there!

So, maybe the answer as to why this body of water shows up on current-day topographic maps is simply that there might be a shortage of resources for field-checking the USGS maps.  Without field-checking, it could be that whenever several aerial photos show a sizeable amount of water at a particular location, then it might end up being depicted on topographic maps as a pond, lake, etc.

B) Findings from my July 2018 trek to this location:

Since I had long suspected this to be an ephemeral pool, it wasn’t overly surprising to find absolutely no water whatsoever at this location during my July 2018 visit.  There wasn’t even enough moisture to dampen the soles of my boots!  The only thing seen was a large glade of ferns!

This finding was in stark contrast to the significant water that I had seen on two previous visits, one in late Spring, and one in late Autumn.  Shown below is a snapshot taken during my visit in late Autumn.
Even though I wasn’t overly surprised that no water was found on this visit, I did begin to have doubts as to whether I was at the right location!  And so, I checked, and re-checked, my GPS to make certain that I was at the waypoint taken for this location on each of my previous visits.  My GPS showed me being at the right spot.  And furthermore, the map that is loaded on my GPS showed me standing in the middle of the “pond”!

But, just to be certain that there wasn’t something odd happening with my GPS, I did some further exploring by walking about 100 yards in all directions from where the “pond” was supposed to be.  Still, no water was found.

In the process of meandering around, I completely forgot to take a photo of the fern glade that had replaced the “pond”.  Fortunately, I have a photo (see below) from another trek to a different location.  It shows a small portion of a large fern glade that is nearly identical to what I saw on my July 2018 trek. 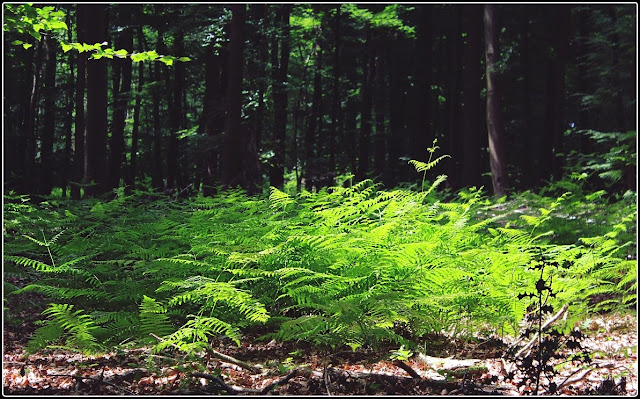 And so, for the time being at least, this ends the saga of the “now you see it, now you don’t” body of water located at the col between Mt. Tremont and Bartlett Haystack.

The ephemeral pool (or whatever it might be) that is described in this report is unnamed.  That being the case, perhaps a good way of ending this report would be to quote an excerpt from a poem entitled “The Unnamed Lake” which was written by Frederick George Scott (1861-1944). You can read the entirety of this poem by clicking/tapping on this LINK.

“It sleeps among the thousand hills
Where no man ever trod,
And only nature's music fills the silences . . .

'Twas in the grey of early dawn when first the lake we spied . . .

Through tangled brush and dewy brake,
Returning whence we came,
We passed in silence, and the lake
We left without a name.”
Posted by 1HappyHiker at 9:02 PM

I also find it strange that an ephemeral pond would be shown on a current topo map. I enjoyed reading your speculations about why the pond was not shown on an old topo map but is shown on one now. Any or all of your hypotheses are plausible!
Based on your photos the col looked like a fine destination for your "fact-finding" mission—loved the sun-dappled logging road pic.
And lastly, I also enjoyed the poem "The Unnamed Lake"—as you said, a very fitting ending to your report!

Many thanks, as always, Rita for reading my blog and sharing your thoughts.