This is the first time in 2-months since my friend Marty and I have hiked together.  Our schedules simply did not mesh during that time frame.   For our "reunion" hike on 13-October, we chose Rumford Whitecap.  Neither of us had previously visited this little 2,214 ft  mountain.

It's about a 70 mile drive (one-way) from our Bethlehem location to reach the trailhead which is situated just a bit west of Rumford, Maine.  The Mahoosuc Land Trust website(click HERE) has directions and other information about hiking to this mountain.   Also, for anyone unfamiliar with the general location of this mountain, perhaps the map below will be helpful. (Click on map to enlarge it.) 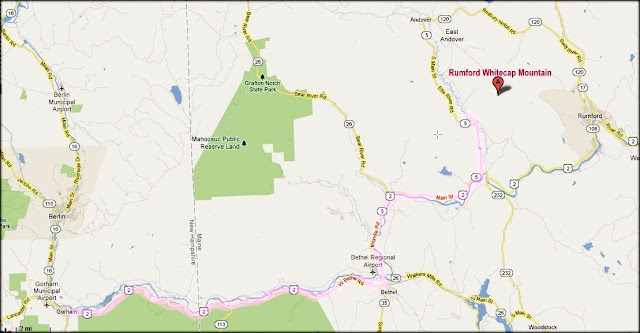 Shown below is a map that is posted near the trailhead.  Marty and I did a loop by ascending via the orange trail (Trail #1 on the map below), and then descending via the yellow trail (Trail #2 on map).   The elevation gain for this hike was about 1,600 ft.  There have been some relatively recent re-routes over the course of our loop, and so it's difficult to provide a precise mileage.  Our round-trip travel is guesstimated to be somewhere between 5 to 6 miles.  We did not run a GPS track. 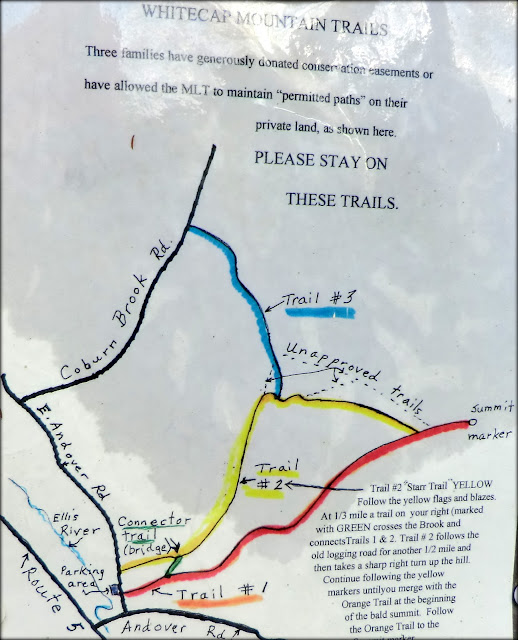 From the top of Rumford Whitecap, there are outstanding 360 degree views which include high peaks in the eastern part of the White Mountains, as well as peaks in the Mahoosuc Range.  However, many of the most attractive views are on the summit itself!  There are over 130 acres of open ledges which are beautifully interspersed with blueberry bushes, conifers, and a variety of sub-alpine flora.  Perhaps the best way to illustrate the massiveness of this bare summit is to show an aerial photo taken by the Mahoosuc Land Trust. 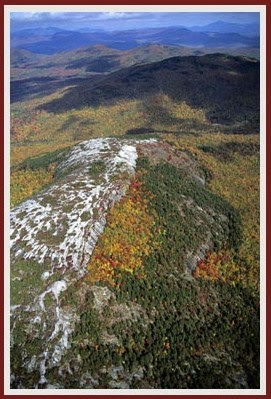 It was a bit of a challenge to take photos on this particular day since the sun would dart behind a cloud after we had already prepared to take a picture at a particular setting.  It started to become comical after awhile! Regardless, shown below are a series of ten snapshots taken during our hike.   As you look at these images, perhaps you will understand why this report is entitled "Rumford Whitecap in Technicolor!" 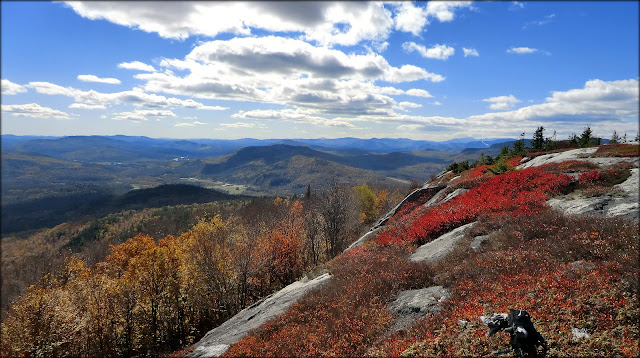 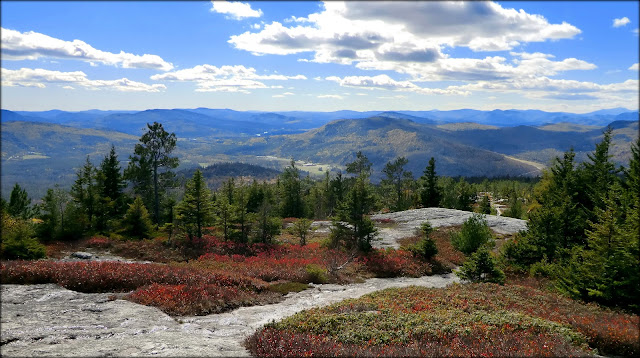 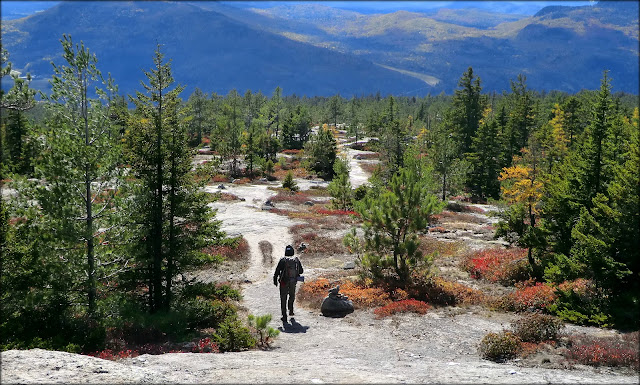 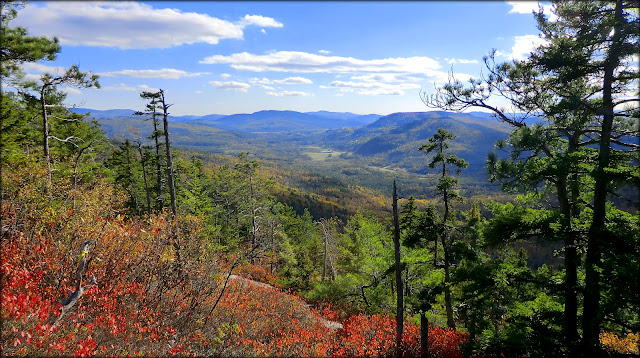 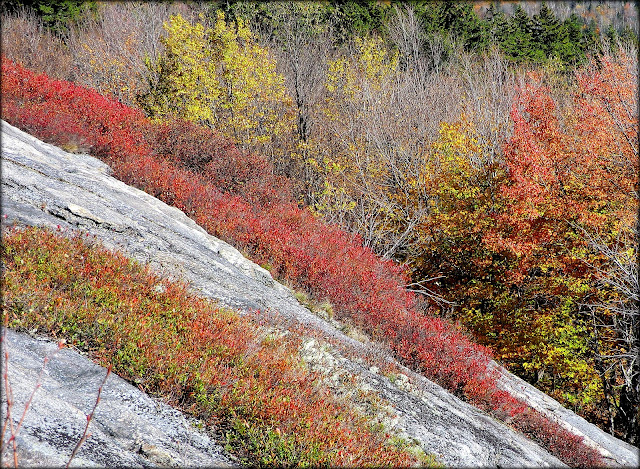 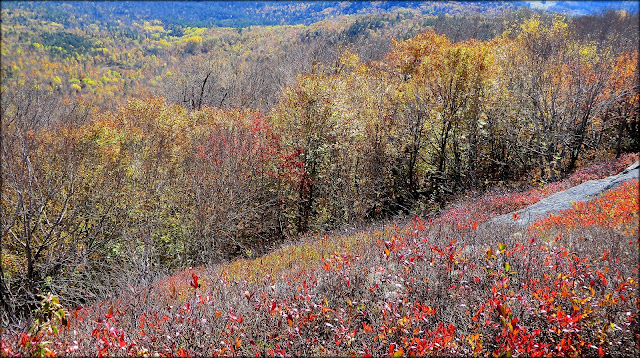 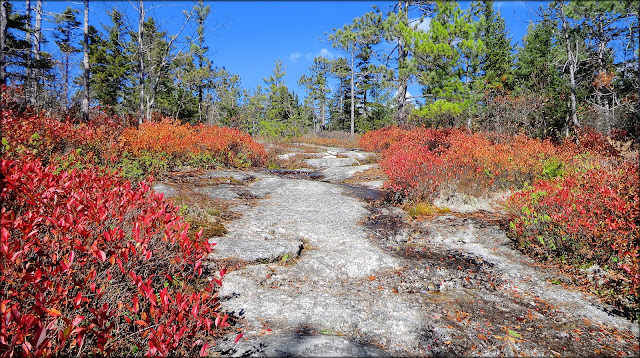 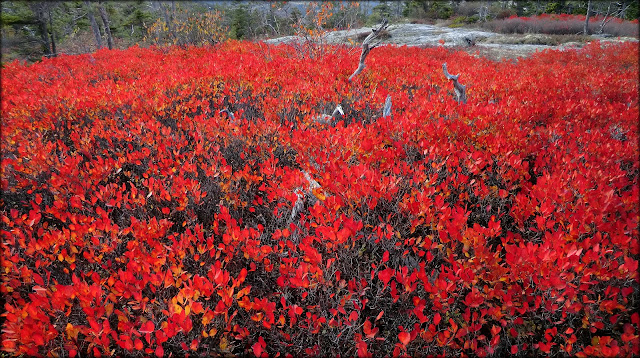 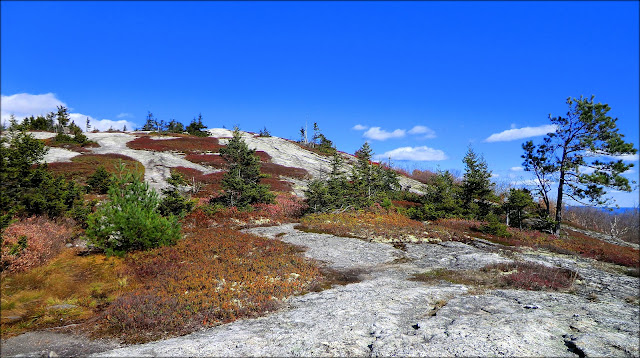 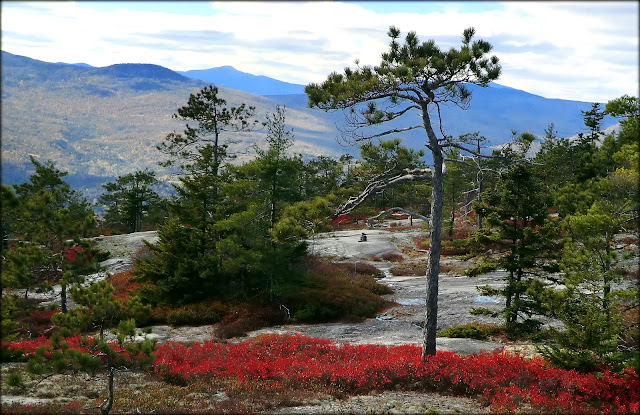 To sum it up, the hike to Rumford Whitecap exceeded our expectations!  It was a pure delight to roam over such a massive complex of ledges, and to be presented with a beautiful scene at every turn.   As the autumn colors begin to fade in many regions of northern New Hampshire, this was a fantastic way to close out the prime foliage season.
Posted by 1HappyHiker at 8:40 PM

That is some amazing color! I think you've got some variety of every color in the spectrum, plus and array of grays and browns in those photos. I don't think the sun darting behind the clouds is a huge problem - less glare and less overexposure can be benefits of the sun behind the clouds, in addition to the clouds adding texture and interest to the background.

Thanks Summerset for your comments. Much appreciated! Your knowledge about photography is impressive!

That's such a great hike! And your report is a reminder that I should pay a visit to that summit (it's local for me) before the snow flies. I've tried to hike it a few times in non-winter but have been attacked by ferocious hordes of mosquitoes on each attempt. That should't be a problem these days.

Hey Nancy . . . wonder what it is about Rumford Whitecap and mosquitoes? I’ve heard mention of this as being an issue from other sources as well. Regardless, as you say, this shouldn’t be a problem at this time of year.

I think you’ll really enjoy this hike. Although there might be other places like it, I have yet to experience it, and so this place was pretty unique in my book!

Another cool report! About how long did it take? Was the footing extremely rough? Was the trail well marked?

Thanks for your questions!

_ Regarding how long the hike took, my friend Marty and I spent a lot of time just roaming around this beautiful place, and so it’s difficult to provide a precise time. However, I’d guesstimate that you should allow about 3 to 4 hours (round-trip) for actual hiking. Of course, a lot depends on your individual hiking speed, and other factors such as whether you do a loop hike (as Marty and I did), etc.

_ Regarding the footing, it wasn’t rough. However, there are a lot of bare rock slabs, and so if conditions are wet and/or icy, the footing could be dangerous.

_ Regarding whether the trail was well marked, I guess I’d have to say sort of! Some of the trail is blazed, but large segments are marked only with colored surveyor tape attached to trees. It’s pretty obvious where the trail is most of the time. However, there is one spot along the orange trail where there is a trail branching off to left with a sign saying “New Trail”. It’s a bit unclear if you’re supposed to take that trail, or continue straight ahead. A hiker who was local to the area happened to come along and informed us that you are supposed to follow the “New Trail”.

Hope this helps! Please feel free to ask any follow-up questions you might have.

Technicolor indeed! You always manage to come up with appropriate, interesting, and/or humorous titles, John.

Tim and I are heading off today for Jackson Hole and Grand Teton National Park, in search of fall color and bugling elk. Hope we find plenty of both!

Oh my! Speaking of being jealous, I’m beyond jealous (let’s call it envious) of your upcoming trip to Jackson Hole and Grand Teton! You and Tim have my very best wishes for seeing lots of autumn colors, plus seeing (and hearing) the bugling elk!

Thanks John! If we see lots of elk you may be viewing them as well—on a future blog post!