Nothing to Hate about a Trek to Baldpate!

When hiking to Old Speck a few weeks ago, the massive expanse of open rock on the East Peak of Baldpate Mountain was so readily apparent.  Ever since then, I've been eager to do a hike to the Baldpates (West Peak and East Peak), especially since this would be another hike that was new to me.   On 13-Sep-2012, I decided at the last minute to do this 8 mile round-trip trek.  I started from the Old Speck trailhead on Rt. 26 in Grafton Notch in the State of Maine.

This hike involves a 3,300 ft elevation gain, but there are only two spots that I feel qualify as truly steep.  One is the 0.8 mile climb from the Grafton Notch Shelter to the top of West Peak, and the other is the climb back up to West Peak on your return from East Peak.  Admittedly, the scramble up to East Peak is somewhat steep, but it's very short-lived.

The trek to the Baldpates is a lovely segment of the Appalachian Trail, and the trail conditions were excellent for the entire distance.  The steep climb from the Grafton Notch Shelter to West Peak is made easier by the magnificent rock work done by trail crews.  With little exaggeration, it almost seemed like climbing a set of rock stairs to the summit.  I tried to get a photo which would be representative of these "stairways", but couldn't seem to get an image that did justice to this splendid piece of work.

However, I was able to get a few decent snapshots that show some other elements of the trail.  Below is a photo composite which shows the following: an Appalachian Trail survey marker; one of the two ladders on the north side of West Peak; a pretty section of trail near the summit of West Peak. 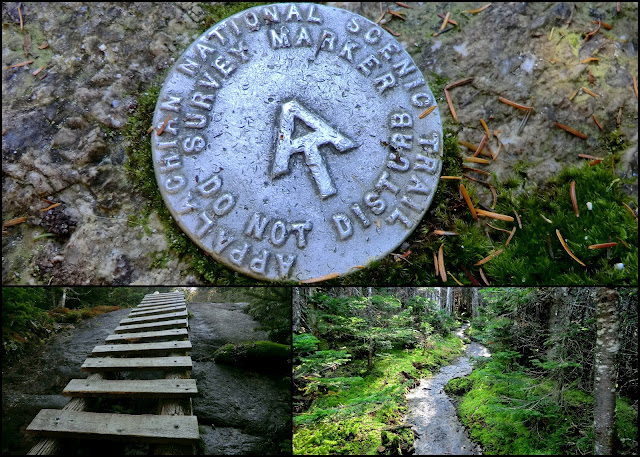 Regarding views from the two peaks, I think the vistas from East Peak are definitely better than those from West Peak.  However, West Peak does provide a great view of East Peak (next photo). 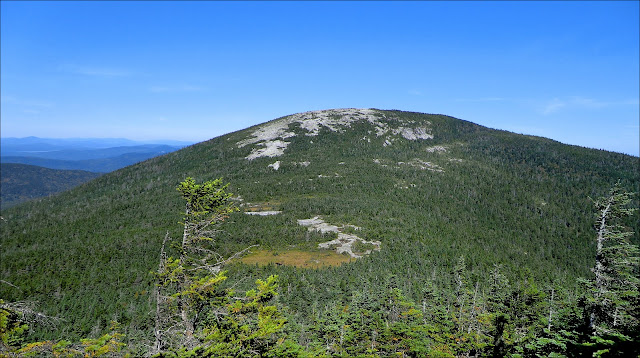 And, so as not to "short change" West Peak, there are  there are many fine views, such as the one shown in the next photo which is looking northward toward what I presume to be Lake Umbagog.  One thing I'm sure of, there is some definite autumn color beginning to show itself in the next photo. 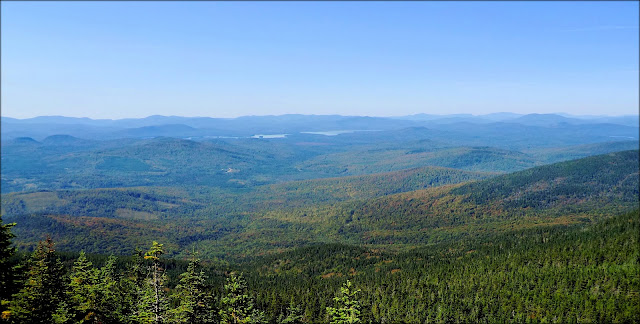 On the way over to East Peak, there is another colorful view in the sag between West Peak and East Peak (next photo). 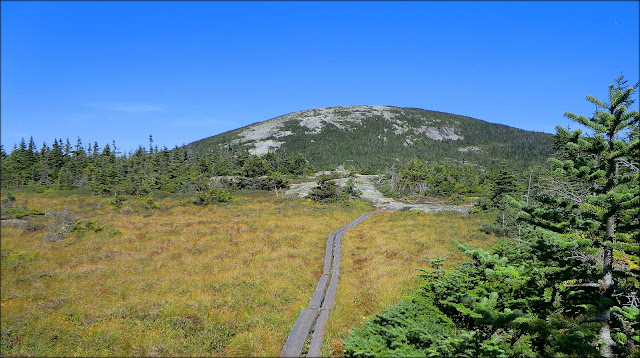 There were many more hikers out on the trail than what one might anticipate on a mid-week day.  The next photo shows a group of hikers descending East Peak.  This particular group didn't consist of Appalachian Trail hikers.  They were just doing a multi-day backpacking trip in the mountains of western Maine. 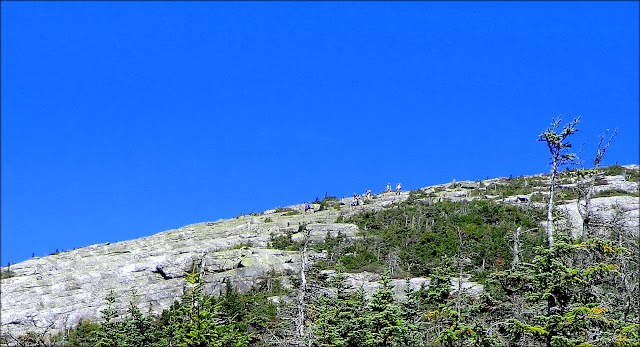 As I neared the top of East Peak, there was a terrific view looking southward toward West Peak.   Clearly visible was the ribbon of trail that I had just descended on its north face.   Even more impressive was seeing Old Speck Mountain looming just ahead on the right, and the countless numbers of peaks in several mountain ranges, such as the Mahoosuc Range, and Presidential Range. 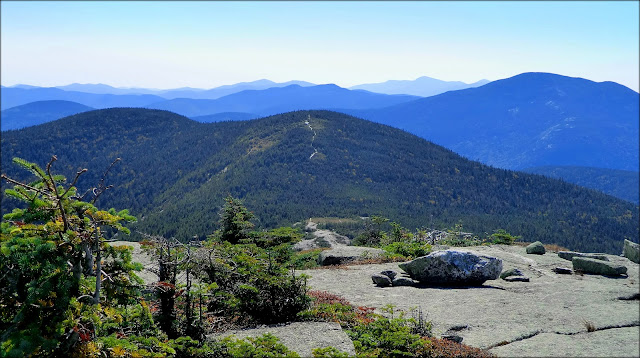 West Peak viewed from East Peak, along with Old Speck (far right), plus countless other peaks

Once I reached the top of East Peak, I was struck by all the color on the mountaintop (next photo). 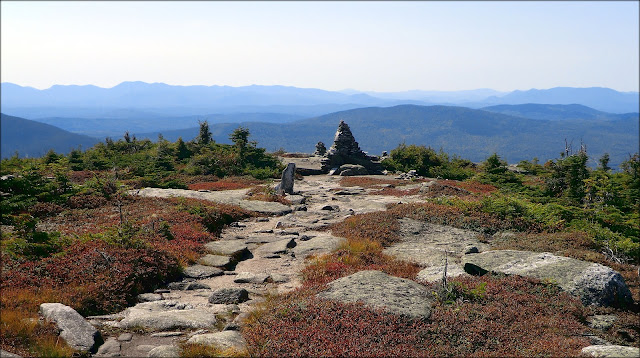 I was also impressed by the stone-line corridor that the trail-crew had constructed in an effort to keep hikers on the trail, rather than wandering all over the mountaintop and damaging the fragile alpine vegetation. 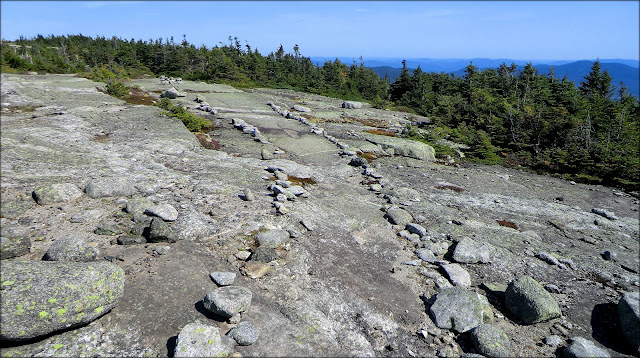 Stone-line corridor constructed to keep hikers on the trail, and off the fragile alpine vegetation

The next photo merely shows the signage atop Baldpate's East Peak. 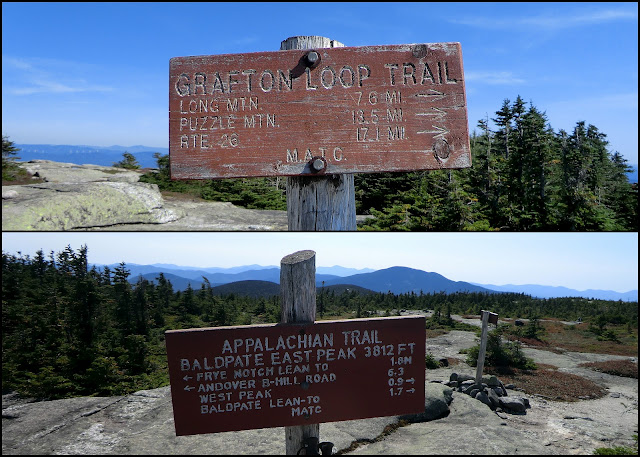 Further regarding the signage, it must be quite a sight for southbound Appalachian Trail thru-hikers to see the scene shown in the next photo.  Behind this sign is a giant vista of several of the mountains in Maine and New Hampshire that they'll be traversing on their way to Georgia. 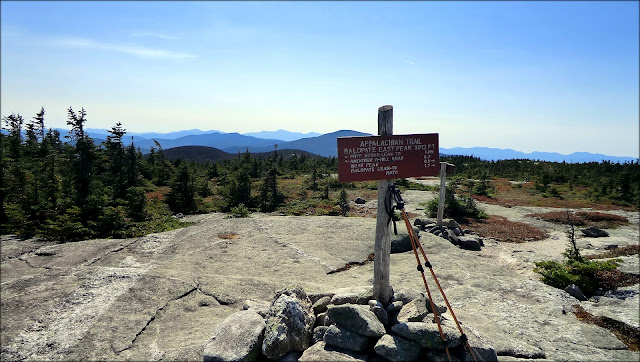 The next four (4) photos show some of the other views that are available from Baldpate's East Peak. 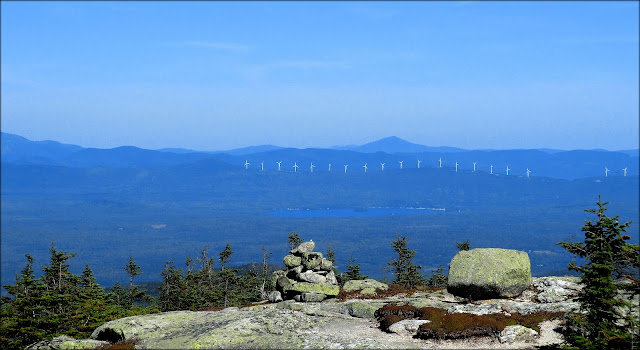 Windmill Farm in Roxbury, ME, with Ellis Pond in foreground, and pointy Mt. Blue in background 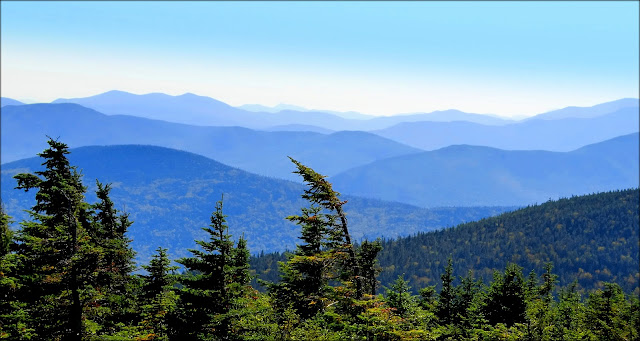 Southeasterly view: Lots of mountains! (Any ideas about the pointy peak just left of center on the farthest horizon, Chocorua, East Royce???) 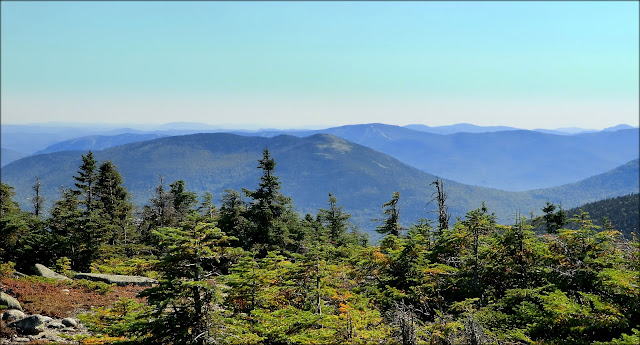 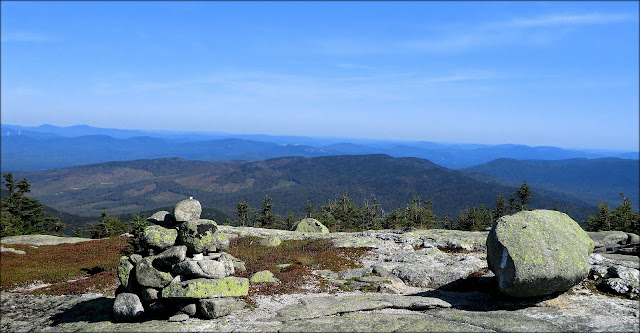 Northeasterly view: In the center of photo (just over the first ridge) is Rumford Whitecap with its bare-rock top.  Hmmm! Might be an interesting hike! :-)

This last photo is one of those curiosity things which perhaps a reader will be able to answer.  Near the top of Baldpate's West Peak, on the north side, there is a greenish-colored blaze painted on the ledge.  A faint pathway can be seen at this point which leads through the scrubby conifers.   Was there once another trail to this peak that perhaps came up from a different direction? 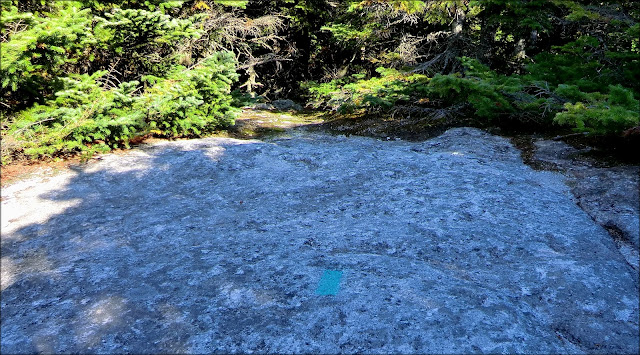 Was this blaze associated with an abandoned trail to Baldpate's West Peak?

To sum it up,  perhaps the title of this report pretty much says it all.  There's nothing to hate about a trek to Baldpate!  This hike was particularly enjoyable since the weather was superb, and most importantly, it was a hike I'd never done, which is always a thrill for me.
Posted by 1HappyHiker at 9:03 PM

Nice day and pics there, John. This is one I still "have" to get to, myself.

In response to your caption, Rumford Whitecap is indeed an interesting hike. I snowshoed it last February so I didn't see any of course, but I hear it is loaded with blueberries in the late summer months. Close up views of the wind towers a ridge or two over.

Trailhead is on East Andover Rd. in Rumford.

Thanks Todd . . . glad you liked the report!
Also, thanks for confirming that Rumford Whitecap is a “hike-worthy” destination.
Although I’m not a “list-hiker”, that one will go on the informal list that I keep in my head! :-)

John,
I always enjoy your reports. I've been on the Baldpates a number of times, most recently over Labor Day weekend when I did a two-day on the east leg of the Grafton Loop trail. The stone stairway up West was just completed this year by MATC and MCC after a several-year effort. They are magnificent and replace a terrible, eroded gully of a trail that was extremely steep.
Jonathan

Thank you for providing that piece of information about the stone stairway up the West Peak of Baldpate!
I thought that it looked relatively new, especially the upper part. It is truly a magnificent piece of trail work! Barring some quirky act of Mother Nature, that stonework should remain in place for many decades to come.

Also, thanks for your kind words about my Blog reports . . . very much appreciated!

The "endless mountains" shot in your southeasterly view should be spectacular in a few weeks! This time of year I always miss the colors of the eastern mountains. We have brilliant golden aspens but not many trees which display those New England oranges and reds.

Your picture of the Appalachian trail sign was great—it must be the only place on the entire trail where one has such an expansive view across the mountains of two states?

Also, isn't it amazing to shoot those "ribbon of trail" photos to see how far you've come?

As always, this was a fun read with lots of interesting photographs.

You honed in on my favorite view of the entire hike, which was the vista that has the Appalachian Trail (AT) sign in the foreground with the enormous display of mountains in Maine and New Hampshire in the background. Depending upon the current mindset of the southbound AT thru-hiker, that view might either be exhilarating, or discouraging! :-) And for the northbound AT thru-hiker who turns around and looks at that scene, he/she must feel a tremendous sense of accomplishment!

Thank you for taking time to post your thoughts and comments about this blog posting!

John, Great Post and hike. When I did the Grafton Loop Trail, and made it to Baldpate just before my overnight loop was nearly done, it was the best peak on the loop. The 360 degree views, I feel, rival some of the good ones in NH. When I did Old Speck again recently, I noticed the wind farm. I don't recall it being there in August 2011. I could be wrong. Just a thought, I wonder if anyone ever considered painting them green to match the landscape?

Not so sure about that Title!! I wasn't too excited about the steepness to get to W. Baldpate! We camped out at the shelter and I thought it was a bit of a tough hike. We never made it to the East Peak due to running out of daylight. However, it is stunning for views up there! Glad you liked it! Great Trip Report and pics as always!

Just beautiful - I can see why the Baldpates were tempting. These and Old Speck have been put on next year's hiking agenda as part of a Grafton Loop backpack for Cam and I. It will be our introduction to Maine, and if we get as half as good a day as you had, it will be great. As to the green blaze, no idea, but that is certainly strange, I can't recall seeing or reading of green paint being used anywhere. Maybe it was once blue-blazed AT side trail, and is now faded to green or an unfortunate blazed shaped patch of lichen?

By any chance, did your hike pre-date the fabulous stone stairway that was just finished up this year in 2012? I do agree that it’s a steep climb from the shelter to West Peak. However, I thought that the recent rock work really helped to “ease the pain”!

Thanks for commenting . . . very much appreciated!

No disagreement from me about your assessment of the awesome views from the Baldpates, especially East Peak. And I also agree that the 360 degree views rival many of the peaks in the Whites.

Regarding the wind farm in the Roxbury, ME area, I’m pretty certain that it was not there in August 2011. Could be wrong, but don’t think that facility was operational until sometime in 2012.

As always, thanks for posting your comments, and thanks for your compliments about my report!

I think you and Cam will really enjoy doing a Grafton Loop backpacking adventure. Good choice!

Regarding that green blaze, I am extremely uncertain about this, but for the moment, I’m thinking this blaze might have been associated with an old trail that began on Rt. 26, paralleled Wight Brook, passed under Mt. Hittie, and then ascended to the summit of Baldpate’s West Peak. There is reference to such a trail in a book entitled “Mountains of Maine: Intriguing Stories Behind Their Names” by Steve Pinkham.

The lower end of Wight Brook is now privately owned and managed by the Maine Chapter of the Nature Conservancy. They maintain a hiking trail on this property that is open to the public, but it only goes as far as a place called Step Falls. I visited this spot on the way to my Baldpate hike. It’s a short and pleasant hike to the falls. At the time, I had no idea that there MIGHT be some connection to this spot and the blaze that I would see later in the day on the West Peak of Baldpate Mountain!