A Loop Hike to Mt. Paugus in the Sandwich Range Wilderness

Some terrific hikes can be launched from the trailhead in Wonalancet, NH.  However, I seldom travel to that location since my home in Bethlehem, NH is much nearer a huge number of trailheads not only in New Hampshire, but many in Vermont and Maine as well!  Despite the long drive, on 17-Sep-2012 I launched a hike to Mt. Paugus from the Ferncroft Road trailhead in Wonalancet, NH.

The somewhat unusual name for this mountain was given around 1875 by a poet named Lucy Larcom.  The name was in remembrance of an Indian Chief named Paugus who lived in this region during the 1700s.  In prior times, the mountain had been known by various monikers including Hunchback, Deer, Frog Middle, Berry, and Bald.

It took me awhile to decide which trails to use.  There are an amazing number of trail combinations that can be used to visit this mountain from Wonalancet, plus there are a couple of different approaches from Kancamagus Highway (Rt. 112). In the end, I decided to hike up the Kelley Trail to the Lawrence Trail and follow it to Mt. Paugus.  Then on the return leg, I took the Lawrence Trail to the trail known as the Old Mast Road which I followed back to the trailhead.  My route is highlighted on the map below (Click on map to enlarge it.)

My route is highlighted in yellow

My final route was chosen because of an interest in the geologic history of the Kelley Trail.  At the upper end of this trail, there are gorges which were carved by torrents of glacial melt-water that gushed down this corridor during the retreat of the last continental glacier.  I was also interested in the American history linked with the Old Mast Road, which by comparison, is much more recent than the Kelley Trail's ice-age past.

As I understand it, in the early 1700s, the Royal Navy's supply of high quality timber and wood byproducts from Norway had been disrupted by a war between Russia and Sweden.  The Royal Navy was desperate for these materials and turned to the American colonies as an alternate source.  In particular demand was the Eastern White Pine which were used for the ship's main masts (and thus the name of Old Mast Road).  However, other trees such as hemlock and spruce were needed for other shipbuilding materials, such as rosin, pitch, and turpentine.  The Old Mast Road is an example of one of many corridors used for transporting these commodities off the mountain and into the supply chain.

Shown below is a composite of a photo taken on my hike along a segment of the Old Mast Road, along with an image showing something akin to what might have been happening on this corridor about 300 years ago. 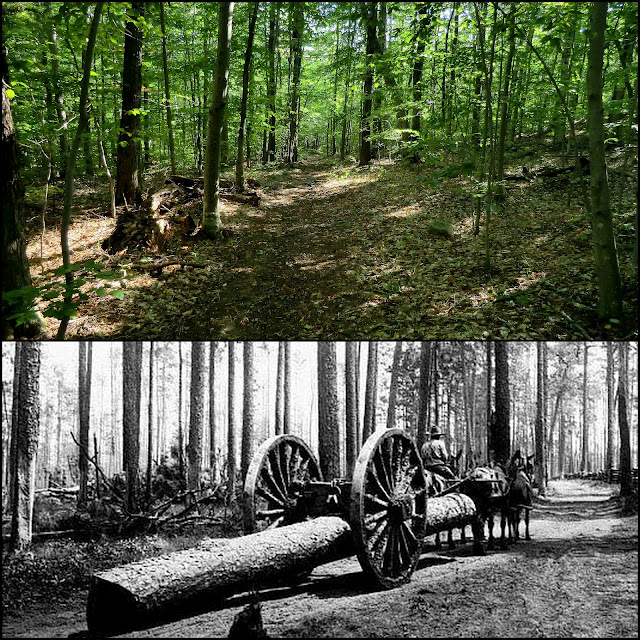 Old Mast Road as it is today, and as it MIGHT have been several centuries ago

Okay, that's probably more than enough history about the hiking trail known as the Old Mast Road!  Earlier in this report I mentioned the glacial-carved gorges at the upper end of the Kelley Trail.   It was a photographic challenge to capture those chasms.  The following two snapshots are the best I could do. 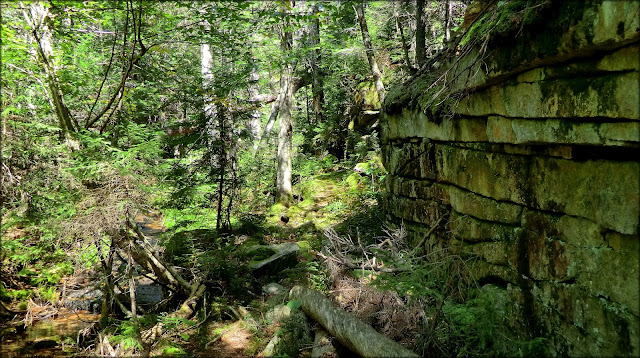 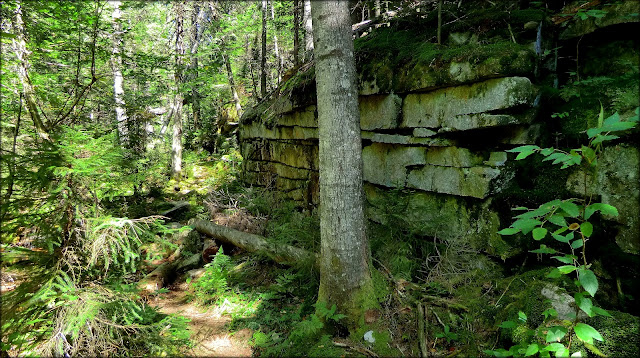 The next photo was taken at the trailhead where I began my hike.  What a lovely scene! It's almost enough to make you want to just spread out in the field and spend the day here! 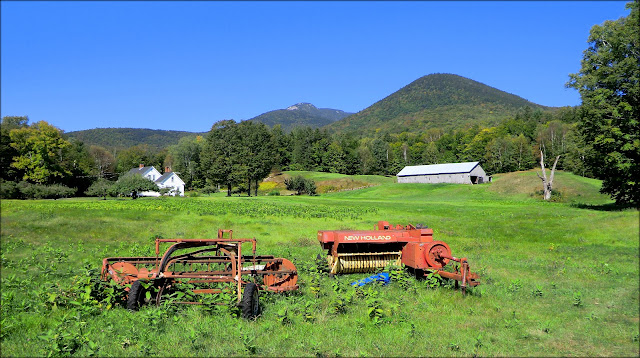 After spending a few minutes taking in the view at the trailhead, I headed for the trail and began my journey.  In about 30 minutes, I entered into the Sandwich Range Wilderness where I'd be hiking for the better part of the day. After passing the Wilderness sign, it seemed like no time at all before I arrived at the gorges at the upper end of the Kelley Trail.  In this gorge area, the trail passes over a rocky terrain which I understand can be quite slippery during wet weather conditions. However, on the day of my hike, conditions were very dry and traction was great!

At the end of the Kelley Trail, I hooked up with the Lawrence Trail.  My next destination would be the ledges on the south knob of Mt. Paugus.  On the way up to the ledges, there was a spot at one of the switchbacks which provided a limited view of a portion of the lower ledges on Mt. Paugus.  There is no trail to these lower ledges, but it might be an interesting bushwhack!  The next photo shows this view. 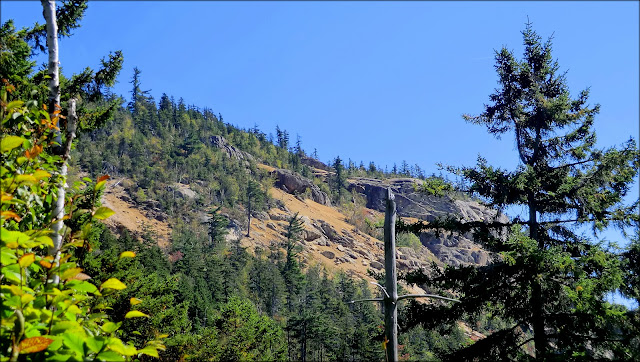 Upon arrival at the south knob of Mt. Paugus, I did as the White Mountain Guide recommends.  I descended "50 yd. southwest from the knob over the ledges and through a belt of scrub to a large open ledge".  I've done some White Mountain hiking, but am far from being an expert in terms of views.  Nonetheless, it would seem to me that these ledges provide one of the finest views of two of New Hampshire's 4K peaks, i.e. Mt. Passaconaway and Mt. Whiteface.   In addition, there are views looking westward along the Rt. 112 corridor where you can see landmarks such as the ledges on Potash Mountain, as well as peaks in the distant Franconia Range, such as Mt. Flume and Mt. Liberty.

Shown below is a photo showing the views mentioned above. 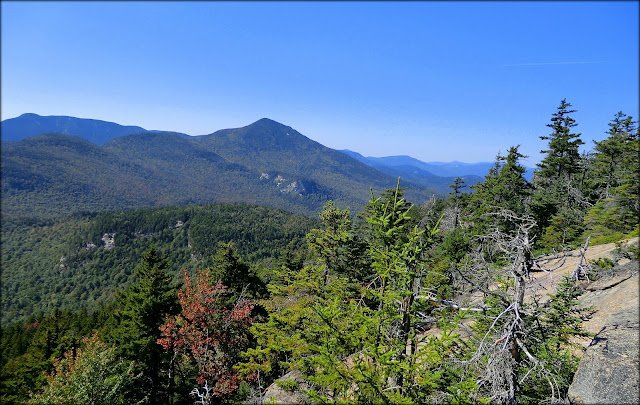 Westward view from ledges on south knob of Mt. Paugus

Another prominent view from the south knob of Mt. Paugus is a southwesterly view looking toward the New Hampshire Lakes Region (next photo). 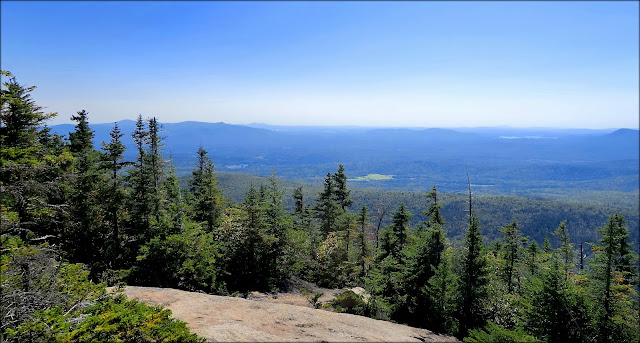 After hanging out for quite awhile on the ledges, I headed back to the point where the Lawrence Trail ends on Mt. Paugus' south knob.  From there, I followed the Old Paugus Trail for just a short distance, and then diverged onto a side path that leads to a very nice view of Mt. Chocorua (next photo). 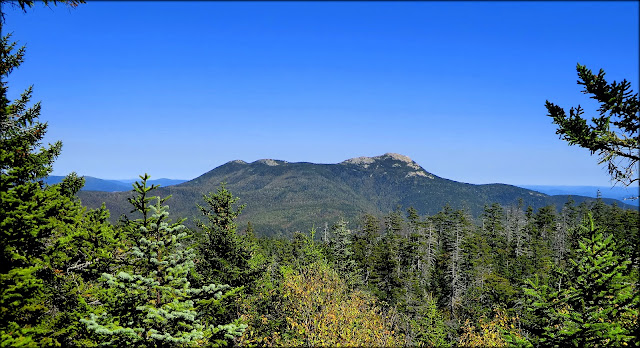 Mt. Chocorua as seen from a side-path off the Old Paugus Trail

By the time I finished admiring the view of Mt. Chocorua, it was already late afternoon, and so it was time to begin the return leg of my journey.

On my way back to the trailhead, I made a brief side trip on the Cabin Trail.  I knew from looking at maps that there should be a view of Mt. Paugus from this trail which would be just a short distance off the Lawrence Trail.  Sure enough, in less than 10 minutes I came to a spot where there was a limited view of the place that I had visited less than an hour ago.  This view is shown in the next photo.  Perhaps a reader can correct me if I'm wrong, but I think that the ledge that I visited on the south knob of Mt. Paugus is the small open area seen in the center of the photo at the top of the ridgeline.  For certain, I know it is NOT the massive ledge seen near the bottom of the snapshot. 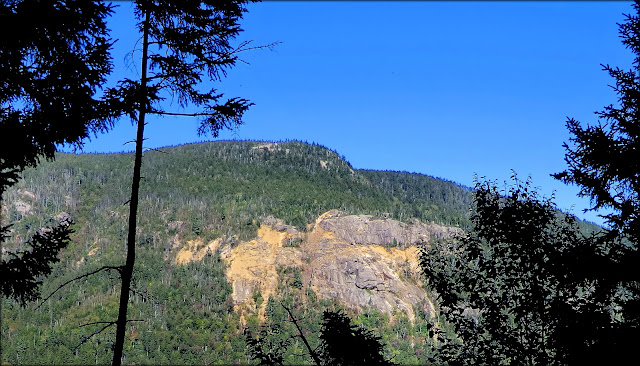 Speaking of the massive ledge near the bottom of the photo shown above, I agree with Steve Smith's description of this ledge as being "similar to the almost desert-like scenery in the Mount Resolution area."  And speaking of Steve Smith, he published an excellent Blog report of a June 2011 visit to Mt. Paugus via a route different from mine (click HERE).

To sum it up, although it's a long drive for me to the Wonalancet area, this hike was definitely worth it!  I loved the views, and loved walking the trails which had so much history, some of which occurred only a few centuries ago, and some many thousands of years ago!
Posted by 1HappyHiker at 10:44 PM

Great report, John, with lots of interesting history. Paugus is one of the under-appreciated gems of the Whites. Those lower ledges are, indeed, an interesting bushwhack.

Steve, thank you for your comments, and also thanks for confirming that the lower ledges on Paugus are indeed an interesting bushwhack. My assumption is that it’s “interesting” in the true sense of the word, rather than “horrifically-difficult interesting”! :-) Regardless, the “on-trail” version of Mt. Paugus is, as you stated, i.e. “one of the under-appreciated gems of the Whites.”

As usual, John, I learned something new in this post. I realized that our eastern forests were logged (almost to extinction) to provide for the needs of the colonies but I didn't know that timber was sent BACK to England to provide for the Royal Navy's use.

Looks like it was a gorgeous day for a hike. Loop hikes in a beautiful mountain wilderness area are so much fun.
And isn't it nice that we now have wilderness designation to prevent some forests from ever being clear-cut again? (At least I hope Congress never overturns any of our country's designated wilderness areas).

That meadow at the trailhead looks welcoming—a great place to stop with a picnic basket!

Thanks for another fun report with useful information and great views!

Rita, it’s terrific to read that you gleaned some useful info from my report. And I completely agree with your comment about hoping that Congress never overturns any of our country’s designated wilderness areas! Related to that topic, I just saw a quote today written by a guy named Gary Snyder, and it reads: “Nature is not a place to visit. It is home.”

Great quote by Gary Snyder! I just wish that more people believed it...

What a lovely day you had for a visit to Paugus! Even though I live south of the Whites, it still takes over an hour to get to Ferncroft. There are many communities in New England with a "Mast Road"; I've heard the same explanation for the these roads, that they were once used to haul out the large timber for tall ships. Last night, I saw a photo in a book on the White Mountain Railroads (a birthday gift from my husband) of poor, logged Mt. Paugus. Looked like someone had taken clippers to it and given it a buzz cut.

As you correctly state, there are indeed many roads in New England that are named “Mast Road”. I probably should’ve made it clear in my report that the one in Wonalancet was just one of many corridors that were used for transporting timber off the mountains and into the supply chain for the Royal Navy.

Regarding that “buzz-cut” of Mt. Paugus by early loggers in the area, thankfully this mountain is now protected from further “haircuts” by being included in the Sandwich Range Wilderness area.

And finally, I do feel a bit “whimpy” about being unenthusiastic to spend over 1.5 hours driving to the Ferncroft Road trailhead. Guess I’ve just become a bit spoiled by living in Bethlehem and being closer to a large number of trailheads in NH, VT and ME. :-)