A Short Saunter up Sleeper Brook 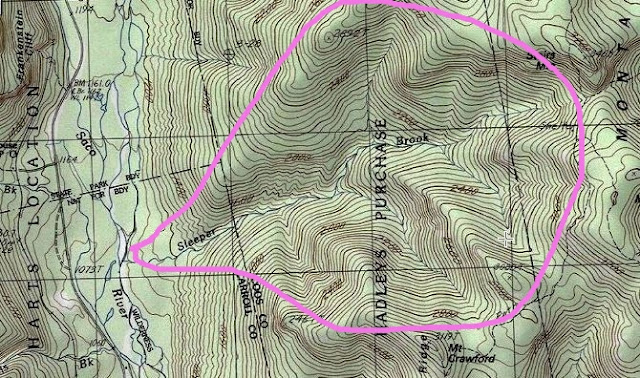 On 15-April, my friend Ben and I took a few hours to scout out a very small portion of this remote area.  Ben has a special interest in the Sleeper Brook area.  In the early 1900s, his grandfather did an awesome exploration of this area by hiking up the Sleeper Brook drainage and eventually ending up on Stairs Mountain which rests at the top of the eastern end of the ravine (see footnote at end of this Blog).  And of course, you have to consider that this feat was done without the benefit of our modern day hiking equipment.  Also, it was before widespread use of the automobile. Getting to this area involved a long train ride for Ben's grandfather.

Due to a variety of circumstances, Ben and I only had about 5 hours available for our adventure.  However, even with the shortened time frame we were still able to experience a great hike, plus learn a few things which will be useful for any future forays into this area.

The extremely dry conditions we are currently experiencing has resulted in water levels that are very low in our brooks and rivers.  These conditions have many negatives, such as increased risk of forest fires, etc.  However, the low water did provide the means for a more straightforward approach to the mouth of the Sleeper Brook.  We were able to launch our hike from a point along Route 302 and then easily ford three bodies of water (Bemis Brook, plus two branches of the Saco River).  Ben is a volunteer fireman and used his waterproof fireman's boots, and I used my Neos overboots.

Just these water crossings alone had their own rewards!  We were able to get an awesome view looking up the Saco River toward Mt. Monroe and other peaks in the Southern Presidential Range. 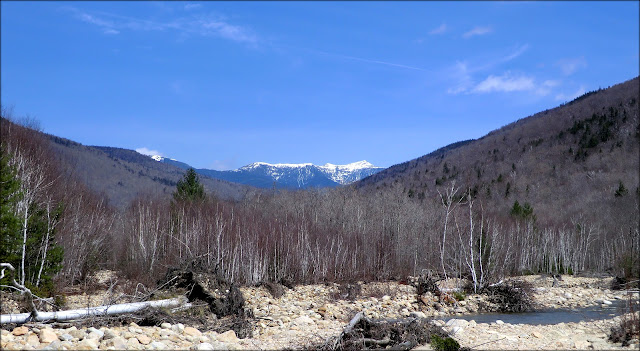 Also, there was a nice view of Stairs Mountain, as seen in the next photo. 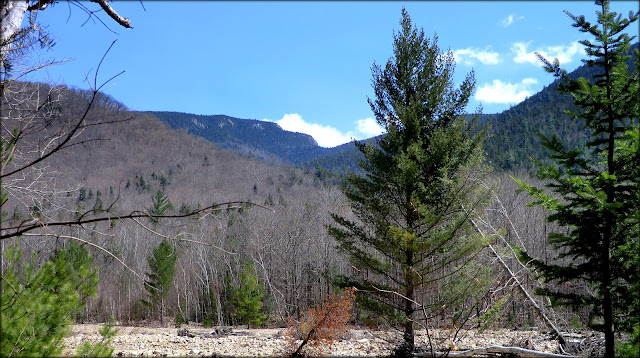 When we reached our turnaround time, we were just beginning to catch a glimpse of the massive cliff at the end of the peak sometimes referred to as Crawford Dome (located northeast of Mt. Crawford's summit).   The snapshot below shows this cliff as seen through the trees. 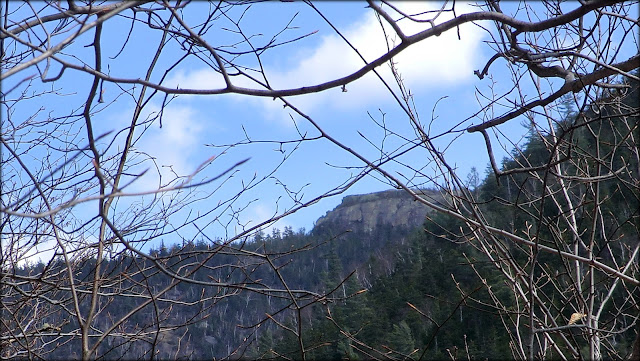 The Sleeper Brook waterway showed clear evidence of the erosion along the banks as caused by Hurricane Irene in 2011.  The next two photos demonstrate this.  The first photo was taken during our trek on 15-Apr-2012.  The second photo was taken in May 2011 when I did a similar exploration along Sleeper Brook by launching a bushwhack off the Davis Path and then trekking northward along the east bank of the Saco River. 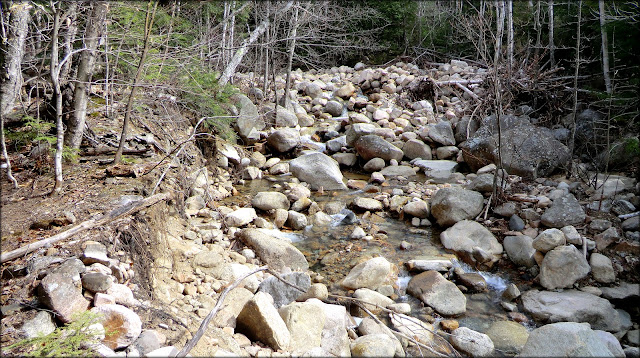 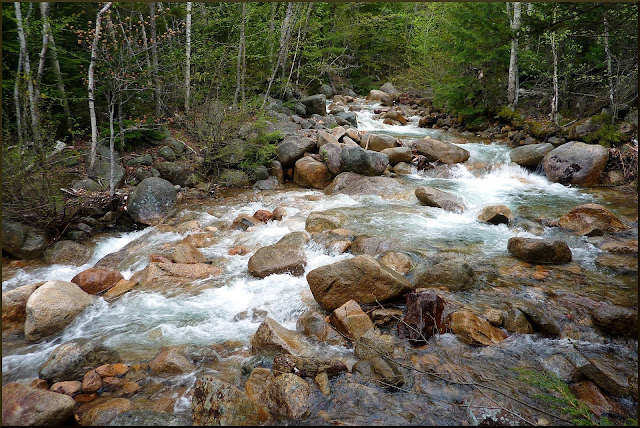 As mentioned earlier in this report, water levels are low due to the current dry spell.  As can be seen in the April 2012 photo shown above, the water flow in Sleeper Brook appears to be meager.  However, it's possible that a portion of the water is flowing beneath the massive rocks and boulders, and therefore the flow could be greater than is apparent.   Regardless, the point where Sleeper Brook joins the Saco is nearly a mere trickle, and is a disappointing sight to behold (see photo below).  It's not the confluence one might expect to see! 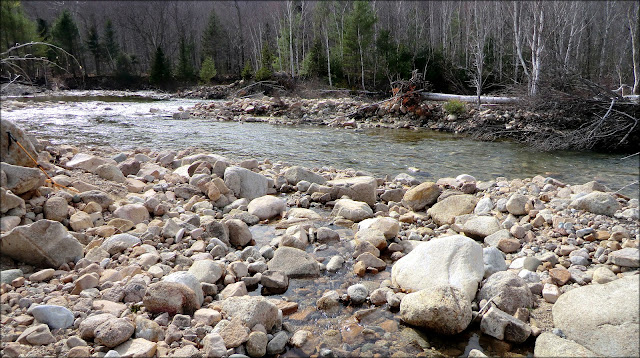 However, I must say that the confluence of the Dry River with the Saco River looked a bit scanty as well!  The meeting of those two rivers was several hundred yards away, but I was able to zoom in and capture the scene that is shown in the next photo.  The point of confluence is circled in pink in both the snapshot as well as the map shown below the photo.  (You might need to click on the image to enlarge it.) 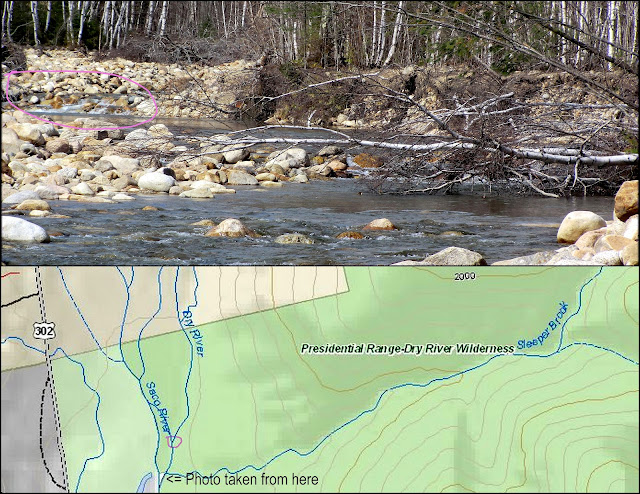 To sum it up, the time and distance for this adventure were both short.  However, quality oftentimes wins out over quantity.  This hike was loaded with quality!


///////////////
FOOTNOTE:
There is a two volume collection of books entitled "Our Mountain Trips" which is edited by Ben and Jane English.  It features journals of  hiking and camping trips to the White Mountains in the early 1900s, as chronicled by Ben's grandparents.  These books might be available at your public library, or they are available for purchase at retailers such as those listed below.
http://www.bondcliffbooks.com/
http://www.mountainwanderer.com/

(The Sleeper Brook adventure undertaken by Ben's grandfather is described on page 125 of "Our Mountain Trips- Part II".)

Nice report and thanks for posting the mention of "Our Mountain Trips". I have those books but never connected that it was "that" Ben whose grandparents were the original authors. What a wonderful connection to some of the original explorers.

And yes, the water is disturbingly low and things are looking very dry!

Thank you for posting a wonderful reply! If the weather folks are correct with their predictions, then our dry period might be coming to an end beginning this weekend. But, as you and I know all too well, weather predictions and reality are often two entirely different things! :)

John, your posts are always so informative. And I love the maps you include—it helps to put things in perspective.
This looks like a beautiful area but it was disturbing to see the difference between the May 2011 photo and the April 2012 picture. We're experiencing a low water year in Utah too, and it doesn't look too good for the streams which depend on mountain snow run-off.

I looked up those books and they sound interesting. Perhaps you should publish "My Mountain Trips"— the 21st century edition!
Rita

It’s such great feedback to read that you like the maps that I include with many of my blog reports. Unless some kind-hearted person such as you says something, then one never knows if the maps are helpful . . . or not so much! :)

Not good news to learn that you’re experiencing a low water year in Utah as well! Hopefully, Mother Nature will soon work her magic and conditions will improve both here and in your part of the country.

Very nice TR John. and as usual, I feel like I'm there reading your reports

John, thanks. Been eyeing that ravine for long time and this summer may be the one for it. Thanks for the reminder.
Ed Parsons

Gary, thank you! That is quite a compliment to state that you feel like you’re there when reading my reports. It can be a balancing act to say just enough, but not go overboard and have the readers go blurry-eyed and lose interest.

Thanks again . . . very much appreciated!

Although I haven’t tried the route along the east bank of the Saco since Hurricane Irene, it was a great route when I did it in May 2011. There was sort of a fisherman’s path for a good part of the way. But regardless of how you get there, I’d definitely recommend trekking along the north side of Sleeper Brook. It is much smoother going on that side.

Wonderful trip report, as always! I have a couple questions:

1. Is the cliff on the northeast corner of Mt. Crawford's summit, actually part of the summit you hike too via the trail...or do you have to hike to the summit and then bushwhack to the cliff? I'm just curious. I have never been up there but plan on hiking it sometime this summer...maybe.

2. I really love that photo of Monroe (not a question, but had to say it!).

3. Where's you're old locomotive that appears in your "Stairs Mountain Profile" photos that we all love?

Hey . . . first of all, thanks for your terrific questions and comments!

Regarding your question about the cliff, I just filed a new Blog report which I think will answer your question. Below is the link.
http://www.1happyhiker.blogspot.com/2012/04/all-in-family-mt-crawford-and-crawford.html

And lastly, about that locomotive you mentioned, thanks for remembering that tidbit that I included in one of my Blogs which showed a profile of Stairs Mountain. I’ve temporarily retired that photo to the “engine house”! :)

Very interesting report, John! That certainly is an intriguing ravine. Glad you were able to make the shorter approach due to the low water. Were the hardwoods pretty nice on that north side?

Who knows how things were in that part of the forest about 100 years ago, but if conditions were similar to the current-day, then it’s very easy to understand why there once was a trail on the north side of Sleeper Brook that ran from Stairs Col to the terminus of Sleeper Brook. That’s a long, roundabout way of saying yes, the hardwoods were indeed nice on the north side of the brook! :)

Great report John! I've always been intrigued by the alluvial fan at the outlet of Sleeper Brook Ravine. You have captured some very nice shots illstrating the glacial geology. Irene provides some disection showing the composition of the fan. That portion of Saco basin is prime example of braided stream valley composed mainly of boulders hence your comment about much of the stream flow in that area may be below the surface. It is very porous. Very interesting indeed!

Thanks Ray for your very insightful commentary about the Saco River basin and geology of the area. Very much appreciated!

Also, I thought that folks with a keen eye, such as you, would pick up on the hardwoods that extend far up the Sleeper Brook valley. But, as you correctly point out, the spruce along the ridge near Stairs Col might be challenging. However, as I recall it, the conifers in that area are generally pretty tame.