All in the Family: Mt. Crawford and Crawford Dome

Some readers might remember a popular 1970s sitcom entitled "All in the Family" which was about the Bunker family.  This report is about a pair of landmarks in the Presidential Range Dry River Wilderness who share the family name of Crawford.  One is known as Mt. Crawford, and the other is sometimes referred to as Crawford Dome.

On 18-April, I was uncertain if I'd have enough time to do a hike of any consequence.  Once it became clear that a few hours would be available, then a last minute decision needed to be made as to where to go!

Fresh in my mind was the short trek up Sleeper Brook that I'd done with Ben just a few days prior.  Suddenly the light bulbs lit up!  I'd never been to the enormous cliff at the western end of Crawford Dome.  If you happened to read my Blog report of that recent adventure, then you'll know what I'm referring to (click HERE to read that report).

The giant cliff seemed like perfect destination since it would be in keeping with my goal of trying to do something new on each of my treks.  Also, this would provide a nice follow-up to the Sleeper Brook exploration.  So, I quickly threw some things into my backpack and drove about 30 minutes down Rt. 302 to the Davis Path trailhead.

Other than a short 0.3 mile bushwhack to the cliff at the end of Crawford Dome, the Davis Path was used for the majority of my hike.  My route is shown in yellow on the Google Earth image seen below (click on image to enlarge it).  Also, circled in red on the image below is the approximate spot where Ben and I ended our exploration on 15-April. 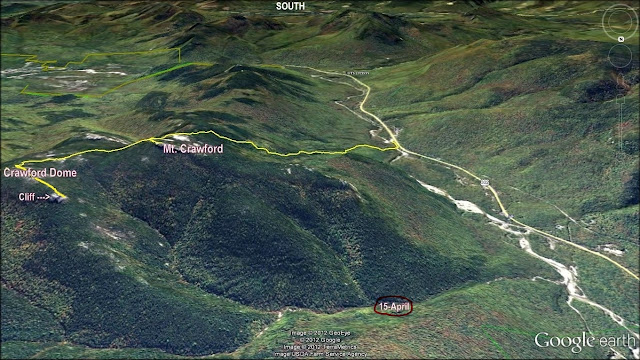 I decided to first do the bushwhack to the cliff on Crawford Dome.  Then, on the return leg of my journey, I would take the spur path to the top of Mt. Crawford.   Since I'd been to Mt. Crawford on many occasions, this game plan would allow me to bypass Mt. Crawford if I was running short of time.

Shortly before leaving the Davis Path for my bushwhack, I encountered patches of snow along the trail (photo below). 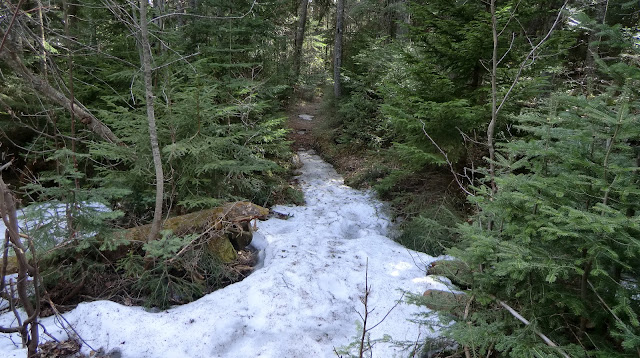 I was hoping that snow would not become an issue once I left the trail and headed off into the woods.  As it turned out, this was not an issue.  However, shortly after I started my bushwhack I had a jolt of another sort!  A large Spruce Grouse made a thunderous take-off nearly right in my face.   It perched in a tree not far away.  I was unsure if it was poised for an attack, or posing for a photo.  Ever so gingerly, I took a snapshot, then quickly continued on my way. 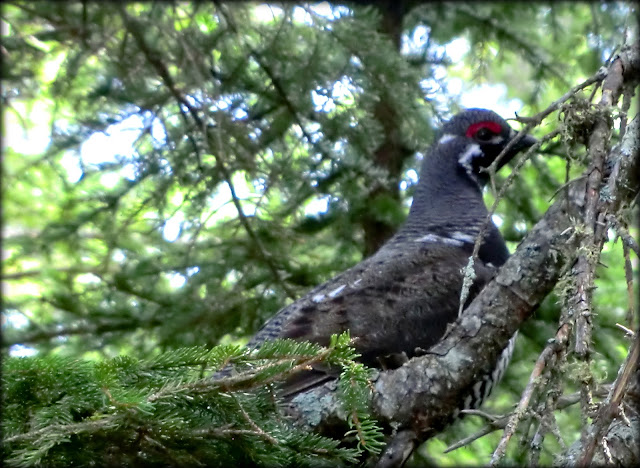 En route to the big cliff, I passed over the top of Crawford Dome where there is nice close-up view of Stairs Mountain, as well as peaks of the Southern Presidential Range on the horizon behind it (next photo). 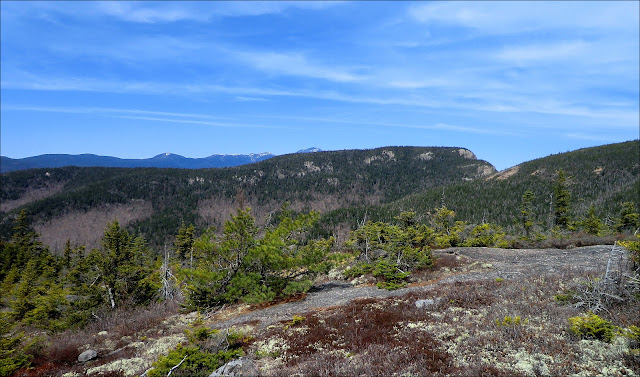 After crossing over the top of Crawford Dome, it took another 10-15 minutes to reach the cliff at its western end.  From here, I could look directly across at the summit of Mt. Crawford.  The next two photos provide both a wide view, as well as a zoomed view of Mt. Crawford's summit area. 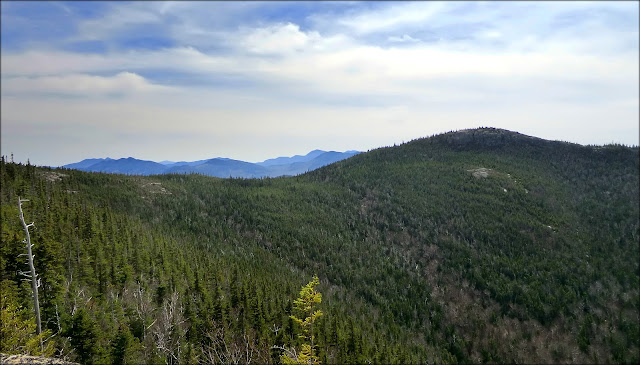 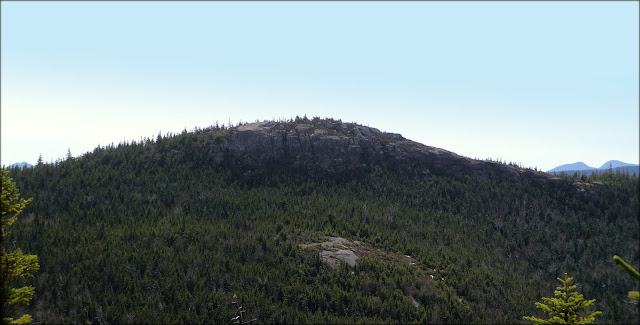 By far, the most interesting view to me was the vista looking northwesterly toward the Crawford Notch area.  Not only was this a pleasant scene, but it also provided the opportunity to gaze down on the area where Ben and I had visited only days before.
The next photo shows the northwesterly view, plus I've placed an "X" at the approximate spot where Ben and I spotted the cliff on Crawford Dome just before we began the return leg of our journey. 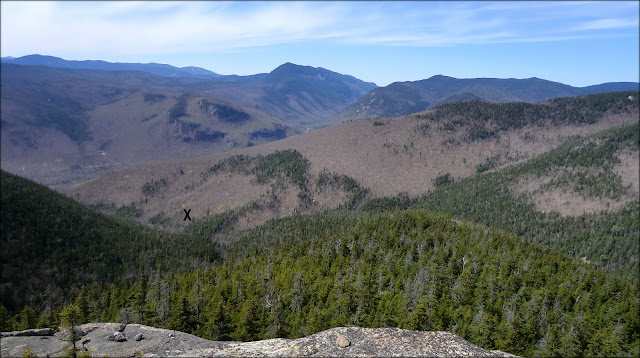 The cliff at the western end of Crawford Dome is a very enjoyable spot to hang out.  I even took a few minutes to put my camera on time-delay and take a snapshot of myself cautiously crouched at the edge of ledge as I looked down at the many ravines of the Sleeper Brook drainage. 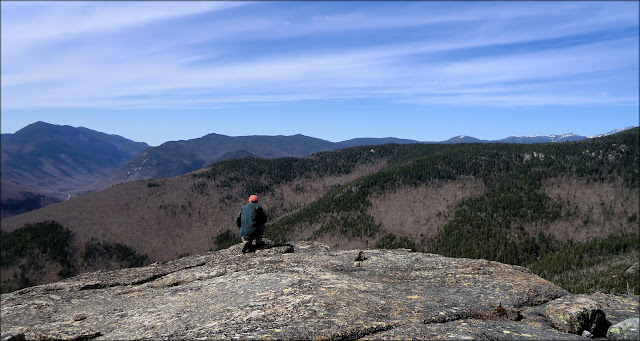 Okay, after taking time for the self-portrait, it was time to move on.   Since there was time available, my next destination would be the short side trip to the top of Mt. Crawford.  Once I arrived there, the first thing I did was to take snapshots of the cliff upon which I'd stood only a short time ago.
The next two photos provide both a wide view, as well as a zoomed view of the cliff at the end of Crawford Dome.
Wide view of cliff and surrounding area: 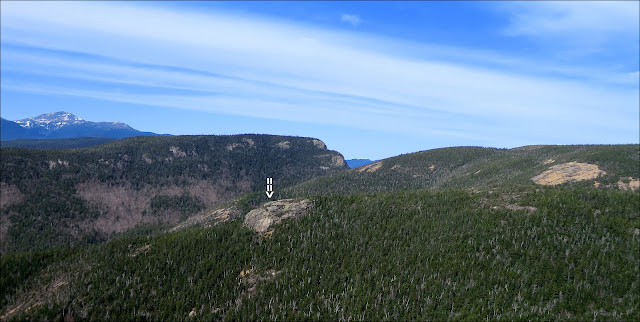 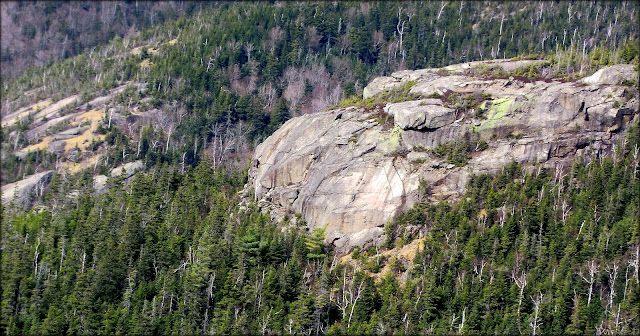 Regarding other views from the top of Mt. Crawford, they are much the same as those seen from Crawford Dome and its big cliff.  And so, I won't bore you with a series of snapshots that are more or less the same vistas as shown previously in this report.  Instead, I'll just show one photo (see below) of a particularly colorful pathway on the summit itself. 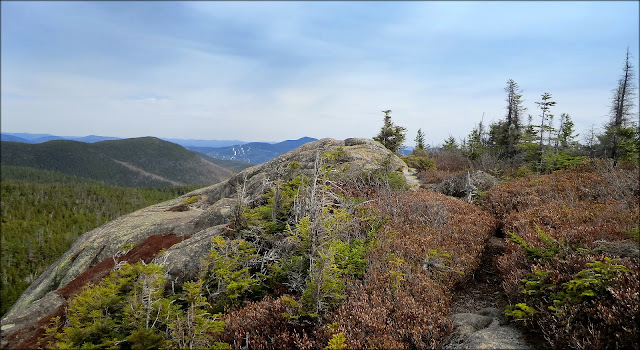 Also, as many readers already know, aside from the views from the top of Mt. Crawford, there are many open ledges on the upper portion of the Davis Path that provide scenic vistas such as shown in the next photo. 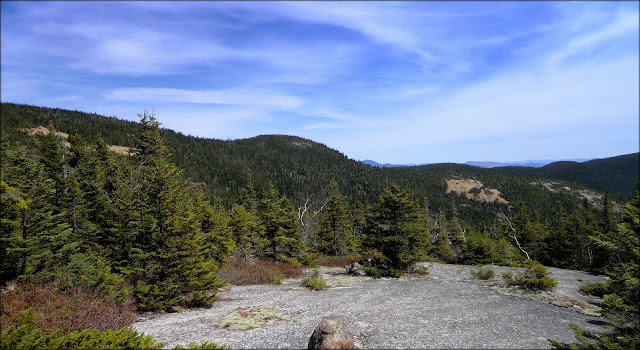 To sum it up, this was a fun day of visiting with the "Crawford family".   Not only was it exciting to include a visit to a new place for me, but it was also a great experience to view Mt. Crawford from Crawford Dome, and then look back at the Dome from Mt. Crawford.  And, even more rewarding was being atop the cliff that Ben and I had spotted only days before, and being able to view the area where we had stood gazing upward at this prominent feature on the landscape.
///////////////////////////////////////
ADDENDUM:
A few readers have commented about the many opportunities for off-trail explorations in the vicinity of Mt. Crawford.  Below are links to reports of two of my adventures in this region.  These links are not provided to “toot my own horn”, but rather as a possible source of information and inspiration to those who enjoy this type of exploration.
Mt Crawford Loop Hike Using Portion of Abandoned Razor Brook Trail
Posted by 1HappyHiker at 5:31 PM

Thanks again Steve for your complimentary words! That is indeed a very cool cliff and incredibly easy to access. Somewhat amazing to me, there wasn’t even a trace of a bootleg trail that I came across.

Regarding the Spruce Grouse, I can only presume it was posing for a photo, rather than poised for attack! :)

I've always had my eye on that place. Paradox and I attempted to get out to the cliff back in Dec 2010. We were all psyched to go there standing on Crawford, but snow squall came in as we descended. We reached the spruce band, but turned back when it started snowing heavily and visibility was crapping out on us. It didn't seem worth pushing through the spruce. I'm glad to see you made it out there on such splendid day.

The feature isn't labeled on any USGS maps, but many older AMC maps show it simply as "Dome". I just checked my 1920 AMC Guide and narrative refers to it as Crawford Dome. I'd like to do a loop some time that takes in Stairs Mt down the spur ridge. An ascent up Sleeper Brook would also be fine trip.

My wife and I just purchased a place in Plymouth for use as basecamp for White Mt exploring. If you're looking for company look me up. Of couse I still haven't solved the work problem.

Very nice John. The cliffs and ledges in that area have been on my bucket list for a while. Driving through Crawford Notch you see a lot of stuff like that. Probably could spend a week exploring it all.

Thanks for sharing and great photos.

great exploration...so that's what those spruce grouses look like- they always scare the heck out of me when I'm lost in thought drifting along a trail and suddenly>>>!!!!!!! They're usually moving to fast to get a good look and I'm to busy waving my hands and poles in panic-

Sorry for the delayed response to your excellent comments.

Although you and Paradox didn’t reach the giant cliff on your Dec-2010 attempt, I congratulate you for trying. And knowing your adventuresome spirit, I’m certain you will try again and be successful.

And speaking further of things of a congratulatory nature, congratulations to you and your wife for purchasing a place in Plymouth to use as a base camp for continuing your explorations of the Whites.

Lastly, you are correct about there being many interesting possibilities for exploration in the vicinity of Crawford Notch. I’ve added an ADDENDUM to this Blog report which provides a couple of links that you might find interesting.

Thanks Joe . . . as always, your comments and input are greatly appreciated!

Regarding the many opportunities for exploring other stuff in the vicinity of Mt. Crawford, I’ve added an ADDENDUM at the end of my Blog report which provides links to a couple of ideas for other adventures in this area.

Yup . . . I think we can both relate to having been startled (and sometimes pursued) by a grouse while tramping through the woods. You wonder if the grouse sit around and tell stories about their encounters with humans?! :)

Hi John -- Another terrific post and great photo of the spruce grouse. They are not as commonly seen as ruffed grouse. I'll keep a look-out for them next time in the Mt. Crawford region, but to see them I suspect one has to bushwhack through the thick fir and spruce as you did! I was surprised to see such a patch of snow/ice on your trek. Nice summary of your wanderings. Thanks, Ellen

Thank you Ellen for your nice words!
I also was quite surprised to encounter the patches of lingering snow on this trek. And then, I was doubly surprised to meet up with the Spruce Grouse! It gave rise to a moment of trepidation as to what other surprises might be ahead of me during the remainder of my trek! :)

I enjoyed this report, John. Isn't it nice to return to a return to a cliff or peak you've seen from below, and to admire the all-encompassing views from above? The colorful path on the cliff reminds me of the "balds" on top of the high peaks of West Virginia.

And I remember your comment (on my blue grouse post) about the grouse in New Hampshire startling even the most experienced hikers! Great picture of the grouse, too.

Sounds like another rewarding hike.
Rita
P.S. I'm one of those readers who remembers "All in the Family"!

Ah! The high peaks of West Virginia! You had to remind me! :) Even though I spent a few years of my life within a few hour’s drive to those peaks, and even though I still have a family member who lives not far from there, I have yet to make it to that part of the world! I vividly remember a terrific post of yours about Blackwater Falls State Park (link below) in West Virginia. Maybe someday! So many places, and so little time!
http://onedayinamerica.blogspot.com/2011/10/blackwater-fall-state-park-davis-west.html

And lastly, ‘tis good to read that there is at least one reader out there who remembers “All in the Family”! ;-)

Awesome, John! I've looked across the way at that cliff quite a few times... nice to see the view from there.

I know exactly what you mean! All these years that have passed! If I had know it was such an easy bushwhack to that cliff, I would have done it long ago!