You've heard the expression "If you can't beat them, join them!"   That's sort of typifies the philosophy I've been following during this winter in which there is very little snow at the lower elevations in NH, and many other New England locations.  At many places where I would enjoy XC-skiing during a typical winter, there either isn't enough snow and/or it's too icy.
And so, I figure that if can't ski them, then walk them!
There is probably very little that would be of general interest for many of my walking forays along those corridors where I'd normally be skiing.  But occasionally, there are some exceptions.  In this Blog report, I'll describe two adventures that might be mildly interesting to a few readers.
1) Shell Cascade (Waterville Valley area)
When looking at maps of the Waterville Valley area, I've often been curious about a geographic feature that is labeled as Shell Cascade. (Click on the map snippet below to enlarge it.) 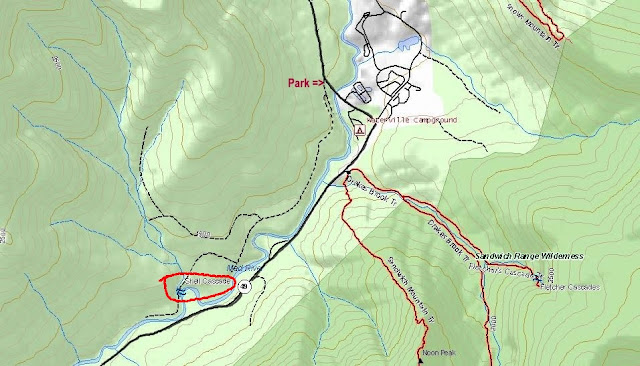 There are no hiking trails that lead to Shell Cascade.  And, from a very cursory search of a few editions of the White Mountain Guide (WMG) books from the early 1900s, it appears that there wasn't a trail even in that early timeframe.   I did find a brief description of a path leading to Shell Cascade in the 1892 book by A.L. Goodrich entitled "The Waterville Valley, a History, Description, and Guide".  The snippet below shows this description in its entirety.

I would need to read this book more carefully to determine the location of the "House" that is mentioned as the starting point for a  trek to the cascade.  But regardless of the location of the house, it appears that it was a 4.25 mile journey to the cascade.  Although I'm uncertain, I presume that was one-way, versus round-trip?!
In the 1990s, Bruce, Doreen, & Daniel Bolnick published a book entitled "Waterfalls of the White Mountains". Shown in the snippet below is the total description of Shell Cascade as described in the Bolnick's book.

I'm assuming that the bushwhack described by the Bolnicks involves fording the Mad River.  I suppose at certain times of year the current and water level must be low enough to safely allow this, and perhaps there are some winters when there are ice dams that are firm enough to permit safe passage across the river.
Regardless, on 30-January, conditions were definitely unsafe for crossing the Mad River!  Therefore, I opted to launch my trek to Shell Cascade from FR116 and follow that corridor to a point near the cascade.  Eventually, I'd leave this corridor to do a short bushwhack to reach the cascade.  The entire trek was done on public land.  The map shown at the beginning of this Blog shows where I parked.
In a typical winter, FR116 is a terrific corridor for XC-skiing.  However, the light snow cover on this forest roadway had been transformed to crusty snow and ice by recent rain events.  Conditions were horrid for skiing, but it was relatively easy trekking with the use of Microspikes, and eventually snowshoes for the bushwhack portion of my hike.
It took just over an hour (one-way) to reach the cascade.  The overall distance was about 2-miles (road + bushwhack combined).  I found the cascade on Hardy Brook at the elevation stated by the Bolnicks, i.e. at about 1,350 ft.  However, as would be expected on a January day, much of the "cascading" was hidden from view by the layers of ice.  But, I fully intend to make a return visit in the Springtime to see this cascade in its full glory!
The snapshot below shows the condition of the frozen cascade on 30-January. 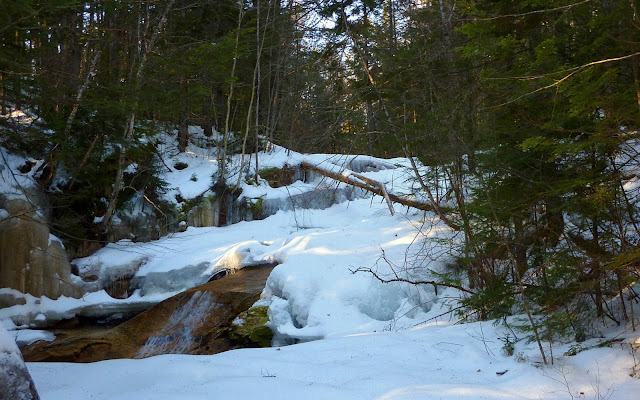 And, the next photo shows Hardy Brook just below Shell Cascade. 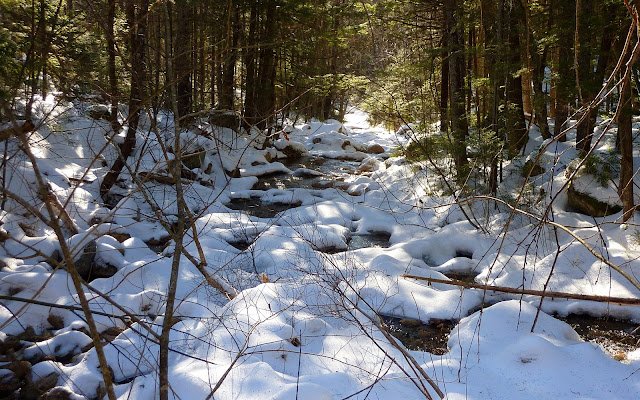 Besides the pleasure of finding Shell Cascade, the overall journey was surprisingly enjoyable as well.  Sometimes, it can be a rather boring experience to trek along a forest road such as FR116 which has been used for logging operations in the past.  However, enough time has passed to allow some "healing".  There are large stretches of the roadway that now somewhat resemble a hiking trail, albeit a very wide trail as seen in the next photo. 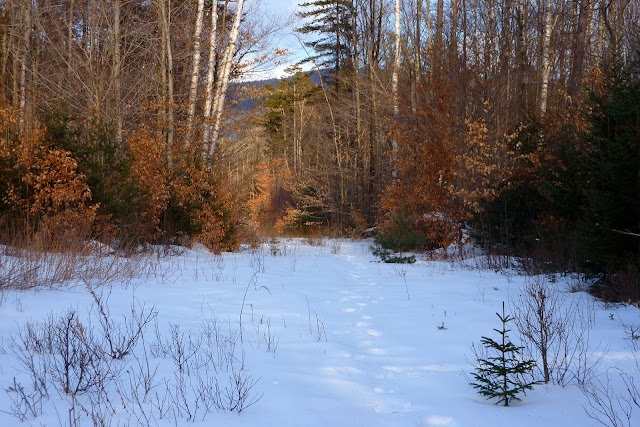 Also, I know it's a bit like cheating, but there are some respectable views from some of the areas that were clear-cut and have not fully grown in.  Some of these views are shown in the next two snapshots.  The first one is looking at Noon Peak and Jennings Peak.  In the second photo, the south peak of the Tripyramids is seen on the horizon.   It's weird that these photos somewhat resemble a scene from late Autumn.  But I think this is merely due to the presence of beech trees which generally hold onto their leaves through the winter. 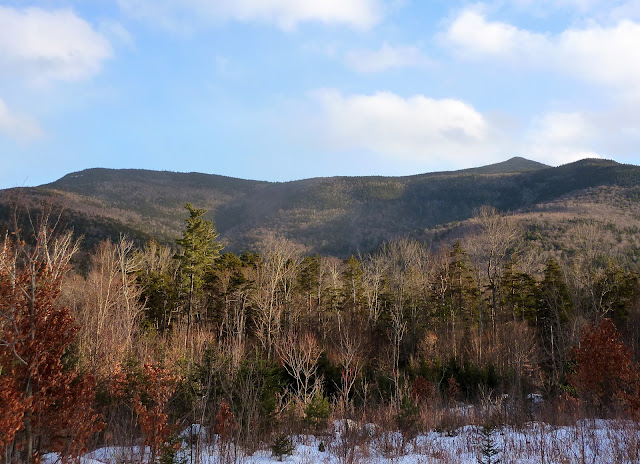 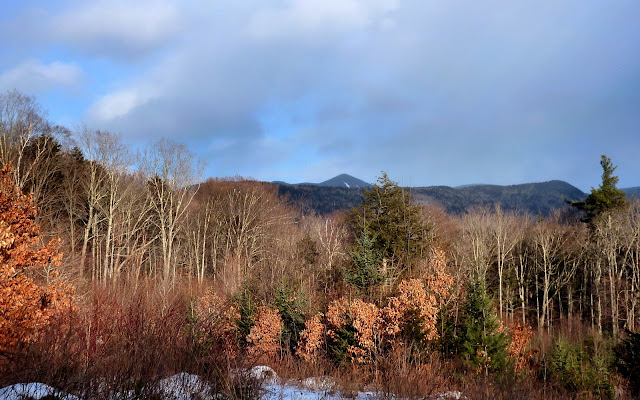 So, that was my Shell Cascade adventure.  The following exploit, which was done a few days prior, is very marginal in terms of sparking any keen interest.
2) Beaver Brook XC-ski Trails (Twin Mountain area)
Unlike my Shell Cascade trek, this hike was done entirely on a trail system.  It just so happens that this particular trail system is designed for XC-skiing.  But, as indicated earlier, the snow conditions are poor.  There was no evidence of any ski traffic on these trails!!  The snow cover is simply too thin, and the surface is too icy.
Unless you've skied this trail system, the names of the trails are probably unfamiliar. One of the trails I walked was the Moose Watch Trail. 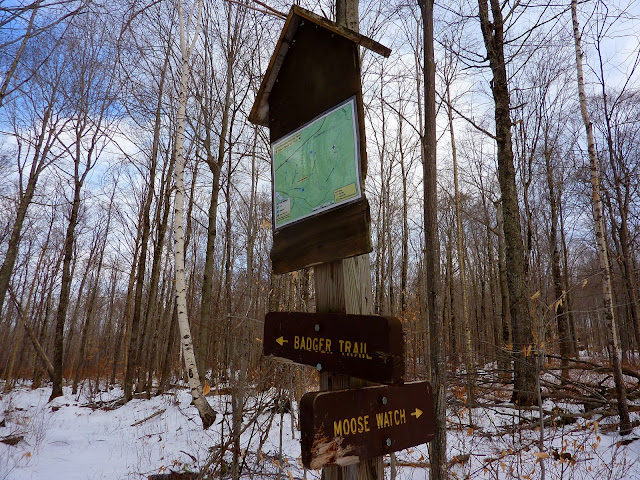 From the Moose Watch Trail there is a nice view of Mt. Garfield and the Franconia Range, as seen in the next photo. 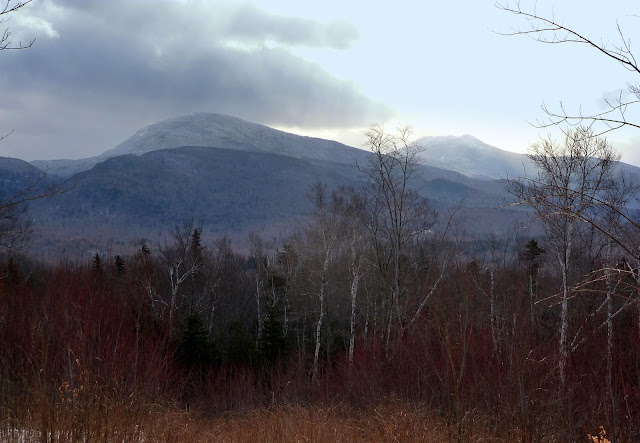 The other thing that I found interesting about this trek was the bright red color of the tree saplings that are seen in the next photo.  Perhaps someone who is more woods-wise and horticulturally-inclined than me can answer this question.  Isn't it a bit early for this red color to be appearing?  I thought this normally started to occur in late February. 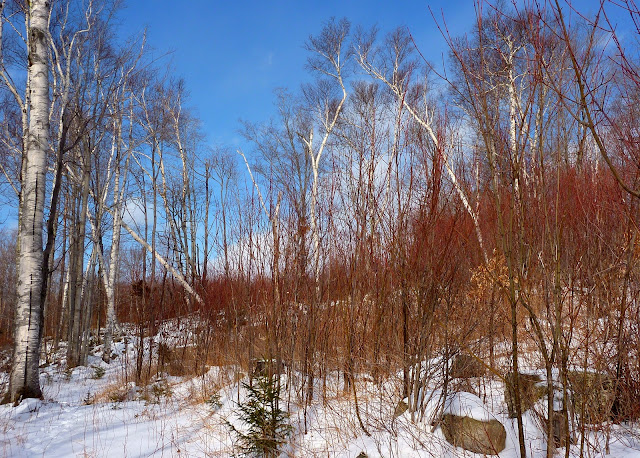 To sum it up,  it would be wonderful if we were experiencing a typical New Hampshire winter.  However, despite the icy conditions and thin snow cover at the lower elevations, there are some interesting treks that can be done in those areas where you would normally be enjoying a nice XC-ski outing.  As indicated at the beginning of this Blog, you might consider adopting a philosophy based upon the adage of "If you can't beat them, join them!"   In other words,  if can't ski them, walk them!
Posted by 1HappyHiker at 4:25 PM

Hey! Shell Cascade - that grabbed my attention as I was browsing through the latest Views entries! That was a neat report, especially since it was about another cascade that has been on my list of water drops to visit someday. That certainly looks like it will be worth revisiting in the warmer seasons.

Hopefully today's snow will make some of that grey and brown go away!

Shell Cascade will be a very “easy mark” for you to check off your list! Depending on when you opt to do it, you might even be able to do the short bushwhack described by the Bolnicks that involves fording the Mad River at a point opposite where Hardy Brook comes in. Of course, another quick & easy option in warm weather months would be to mountain-bike the FR 116 roadway.

Thanks for the pix of Shell Cascade. Found it years ago by fording Mad River downstream of the Flat Rocks. Best part of a summer visit it how unspoiled they are - moss covered - I imagine how all our mountain brooks used to look.

It’s good to read that it’s possible to reach this picturesque cascade by fording the Mad River at certain times of the year. I’m quite eager to re-visit Shell Cascade in the warm weather months.

Thanks for posting your comments!

Nice way to make the most of the season we have been given! I was in the Waterville area the very next day.

I just "liked" your Waterville Valley Resort report on Facebook and commented on your Blog.
http://www.newenglandoutside.com/2012/02/waterville-valley-resort-review.html