Mt. Parker!  It's not a mountain that comes to mind as readily as the names of New Hampshire's 4K peaks.   As a matter of fact, Mt. Parker barely makes it as a 3K peak with an elevation of only 3,004 ft.  For anyone unfamiliar with the location of Mt. Parker, it is situated nearly due north of the village of Bartlett, NH.  It's on the southeast edge of the Presidential Range Dry River Wilderness, and is the southernmost 3K peak on the main branch of the Montalban Ridge.

Perhaps the distance and elevation gain involved for a mere 3K peak is part of the reason for this mountain's lack of popularity.   Another possible deterrent is the fact that there is no practical way to include Mt. Parker as a part of a loop hike.  It is an out-and-back hike via the same route.  Plus, you need to ascend and descend Oak Ridge on the way to Mt. Parker, then ascend and descend this ridge again on the return leg of the hike.   A sizeable chunk of the elevation gain for this hike results from ascending this ridgeline twice!

Whatever the reason for this mountain's lack of fame, it surely cannot be due to the lack of spectacular views in all directions.  By far, the most striking view is looking northward up the Montalban Ridge and Rocky Branch valley toward Mt. Washington and the southern Presidentials.  On my trek to Mt. Parker on 26-January, I took photo after photo of this particular view.  A selection of these snapshots are shown below.  Some are un-zoomed, whereas others are slightly zoomed, and one is a highly zoomed shot of Mt. Washington. 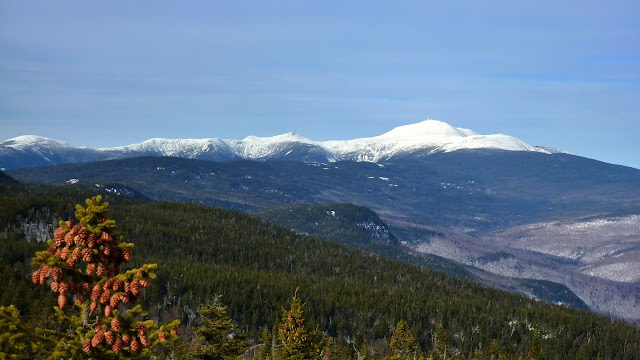 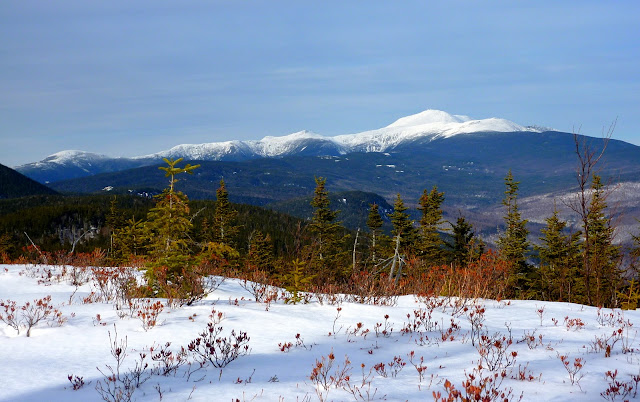 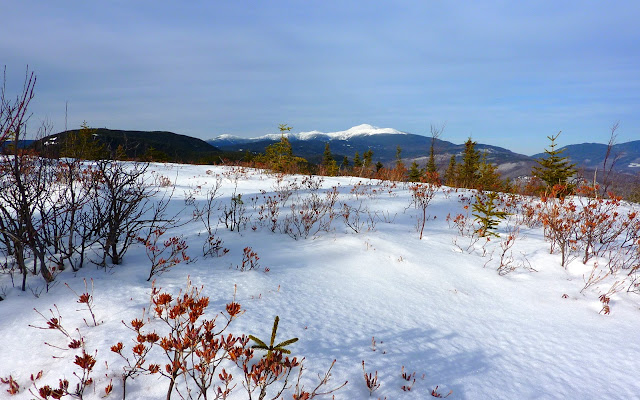 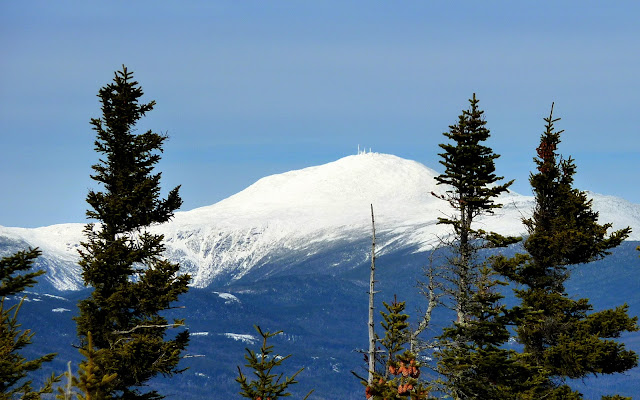 Besides the awesome view northward toward the Presidential Range, there are other views to the south, east and west that have a beauty of their own.  Some of the more recognizable peaks and mountain ranges that can be seen include Mt. Resolution, Mt. Crawford, peaks in the Willey Range, the Twin Range, the Nancy Range, Mt. Carrigain, the Osceolas, Mt. Tremont, the Tripyramids, Mts. Whiteface, Passaconaway, and Chocorua, as well North Moat, the Wildcats, Carter Dome, peaks in the eastern Mahoosucs, the Baldfaces, the Doubleheads, plus Iron Mountain and Kearsarge North.


The next set of photos show just a small selection of some of the views mentioned above. 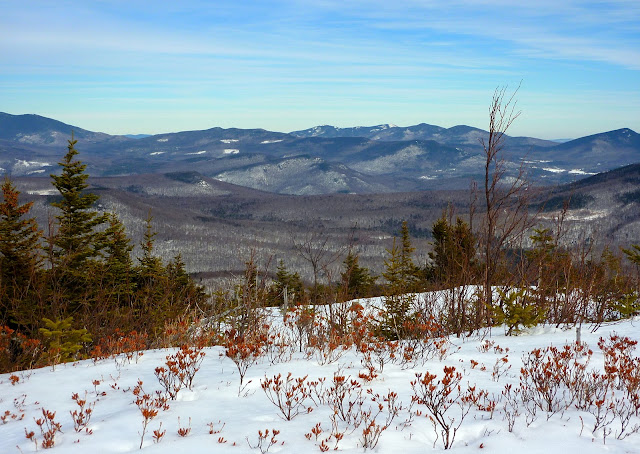 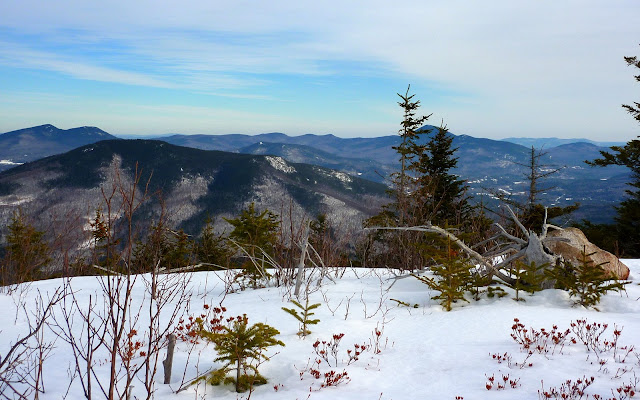 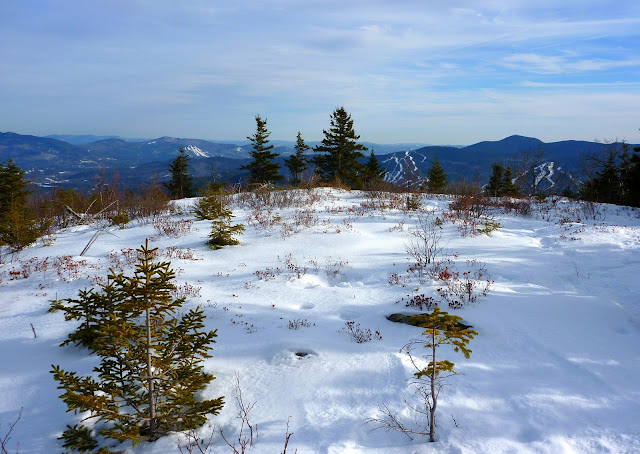 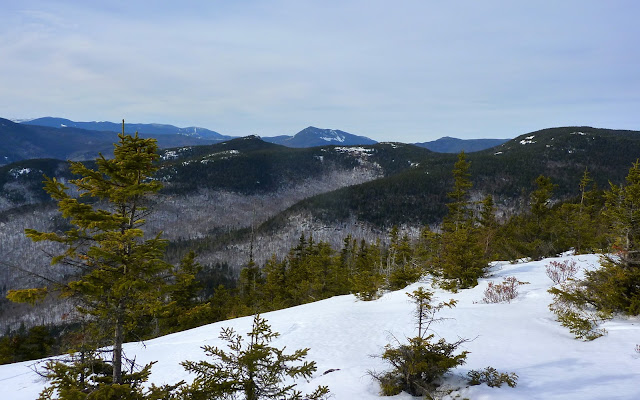 Way off in the distance, the westward view even includes the summits of Mts. Lincoln and Lafayette with a bit of Bondcliff showing below.  The next photo is a highly zoomed snapshot of this view which is comparable to what you would see with binoculars. 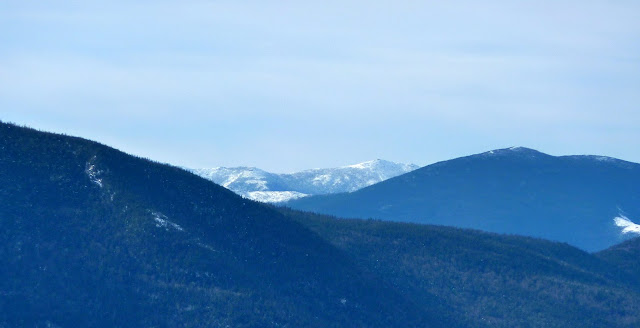 And speaking of zoomed photos, shown below is a close-up of Chocorua as seen from Mt. Parker's summit. 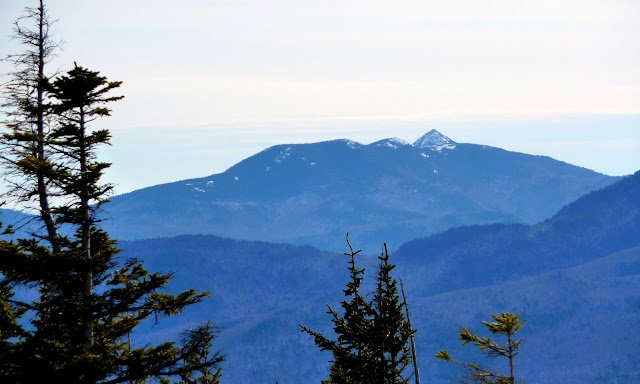 The trail conditions on 26-January were perfect for snowshoes from trailhead to summit. There were some blowdowns along the route, but all were easily negotiated.  Shown below is a typical section of the trail. 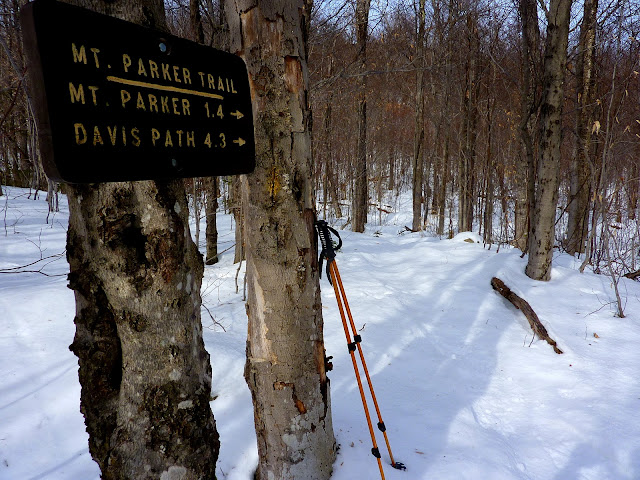 The first mile of the route (from the trailhead for the Mt. Langdon Trail to the boundary for the Presidential Range Dry River Wilderness) has recently been logged.  Although I've hiked to Mt. Parker many times, this was the first time I've done so in the aftermath of the logging. With the snow-covered ground, things don't look too bad.  There are a number of new logging roads diverging from the main roadway that the trail follows, such as shown in the photo below. 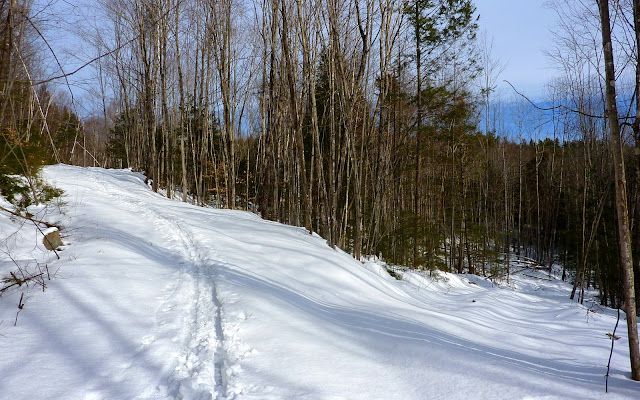 At points where it could be confusing as to which way the trail goes, there are signs to direct you.  Also, there is a sign to direct you to Cave Mountain, whereas this spur trail was un-signed prior to the logging.  The composite photo below shows the Cave Mountain sign, as well as a sample of the multiple signs along the mile-long route of the logging operation. 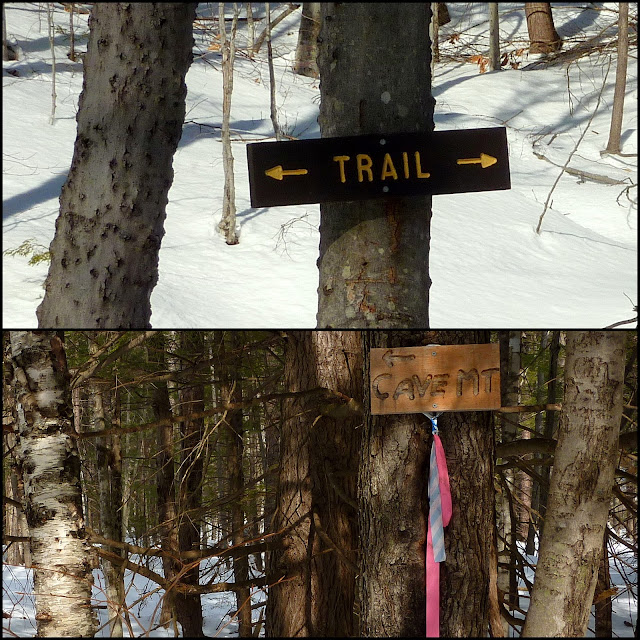 To sum it up,  in my opinion, the trek to Mt. Parker is well-worth the 7.8 miles and 2,800 ft of elevation gain that it takes to get there.   I suppose my only word of advice would be to choose a good viewing day when visiting this little mountain.  It would be disappointing to travel that distance and gain all that elevation and then be unable to see all that Mt. Parker has to offer.
Posted by 1HappyHiker at 1:20 PM

Breathtaking views. Clear as a bell.

I spent the night on the top of Mt. Parker several winters ago. Nice summit. I've also done a "loop" where I drop a bike at the Davis path trail head and then drive to the Mt. Langdon trail. You get Mt. Resolution and Crawford this way too, great hike!

Very nice John. I love Mt Parker but have yet to hit in winter. It's now on the List. I feel funny telling this since I've been told you're the master at this. But my first time there I was insistent on finding some clear views east so I forced the issue and found a quite large, wide open ledge about 50yds. due east of the summit. Very visible on G.E. Outstanding, unobstructed views to the S.East, East and N.East. You probably know about it but something with checking out your next time there if not.

John--you continue to inspire with your treks to less traveled places and your photos-wow! We clearly need to get up north where there is still some semblance of winter. Ellen

Thanks Peppersass!
I just happened to luck out with a great viewing day!

Wow! That bike/car-spot loop sounds terrific! I'll definitely keep that in mind! Thanks for sharing that nugget of info!

Ellen . . . your very generous comments are greatly appreciated! Thank you!
Regarding "some semblance of winter" being here up in the North Country, after today's steady rain things look less than wintery! My trek to Mt. Parker was one of the very few hikes that I've done this winter where I could wear snowshoes from trailhead to summit. What a winter!?

Yup . . . I'm aware of that ledge located west of the main summit. It's a wonderful spot! Actually, some of the snapshots I posted were taken from that ledge, such as the zoomed view of peaks in the Franconia Range, and the northwesterly view toward Mt. Crawford and the Willey Range.

The faint pathway leading to that ledge is somewhat visible during the warm-weather months, but during snow-season . . . not so much! :)

Thanks Owen!
I really enjoyed the views, and it's great to share these views with appreciative folks like you the hiking community.

John, I have never heard of mt Parker but it looks awesome! The views looks like the view from mount monadnock but without any of the crowds! I think NH's sub 4000 ft peaks don't get the credit they deserve.

Great report and photos, John. What a day for views! That ledge that Joe referred to is a great spot indeed. Glad you were able to snowshoe all the way - a rarity this winter for sure.

Your statement about NH's sub 4000 ft peaks not getting the credit they deserve sure rings true with me! This is especially true for 3K peaks like Parker where not only are the views terrific, but if it's distance and elevation gain that you're looking for, then the stats for Parker exceed many of the 4K peaks! :)

Not only are there nice views from that west ledge on Parker, but as you've probably experienced, it's a great spot to have lunch, especially if it's breezy on the main summit where it is more exposed to the elements.

It was nice to be able to snowshoe from trailhead to summit. However, toward the end of the nearly 8 mile trek, my legs were starting to feel a bit tired. Unlike most winters, I'd not had the opportunity to gradually build up endurance to the added weight of snowshoes attached to my feet for the entire day!

Now that I am free from the restraints of the 48 4000 footer list I may actually check out some of the awesome hikes you have been writing about!

Wow, that is an interesting peak. The views are actually better than many of the 4K's, with the same amount of effort or less in some cases!

You cleared it up I think but I did mean the west ledge with views west. I swear I'm dyslexic when it comes to my east and west in the mountains.

Joe, I'm not just saying this to make you feel good. I'll also freely admit to being dyslexic about east and west! Can't tell you how many times I've had to go back and make corrections in my writings!

Thanks Summerset! Yup, the views from Mt. Parker are particularly exquisite! I think that the quality of the views from many 3K (and even a few 2K) peaks is sometimes underestimated.

Thanks Rita for your comments. I appreciate your continued support of my Blog postings!

Did you stop by Cave Mt? If so was it worth the extra time to see it?
Parker's one of my remaining 12 52WAV's. So your blog is very helpful.
Great photos.
Om shanti,
Roberta

Sorry I’m a bit late with my reply to your question.
Regarding Cave Mountain, I wasn’t overly impressed, but many folks find it very worthwhile. Regardless, I would suggest that you forego visiting it on the outbound leg of your trek to Mt. Parker which is your primary target. If you have time on the inbound leg, then you could stop by and pay it a visit. Or, you could just do it as a “stand alone” trek the next time you’re in that general vicinity.