A Little off the Middle: Middle Mountain (North Conway)

While in the North Conway area on 05-January, I ended up with about 3 hours of daylight after running some errands and doing some shopping.  Despite the forecast for a mostly sunny day, it was a mostly cloudy day!  Imagine that!  Considering how little time I had, plus the fact that viewing conditions (especially for distant peaks) was poor, I opted to merely check out a few "curiosity things".

First off, I checked out the Conway Recreation Trail.  This is a multi-use trail (hike, bike, snowshoe, XC-ski) that runs along the bank of the Saco River (see map below).  As a hiking trail, perhaps it would be best enjoyed as a stroll along the river on a sunny summer day.  On this particular day, there was nothing of interest to photograph.  If we ever get any significant snow, I think this would be a nice trail for some mellow XC-skiing.  In the warm-weather months, it looks like a nice place for biking.  When I was there, the trail was being used by folks as a place to walk their dog.  So, here's yet another multi-use activity for this trail!

(NOTE: Clicking on any image in this report will slightly enlarge it.) 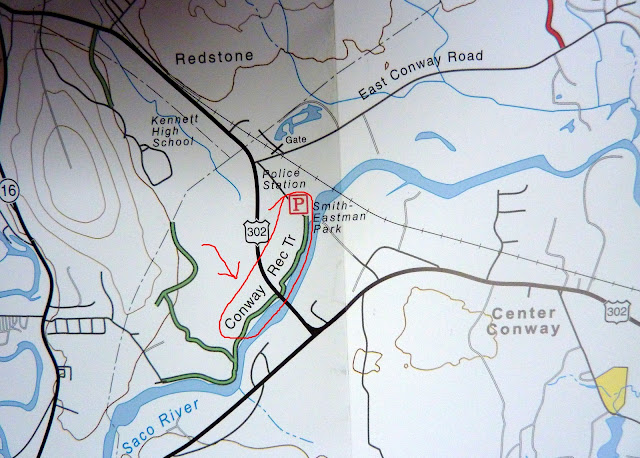 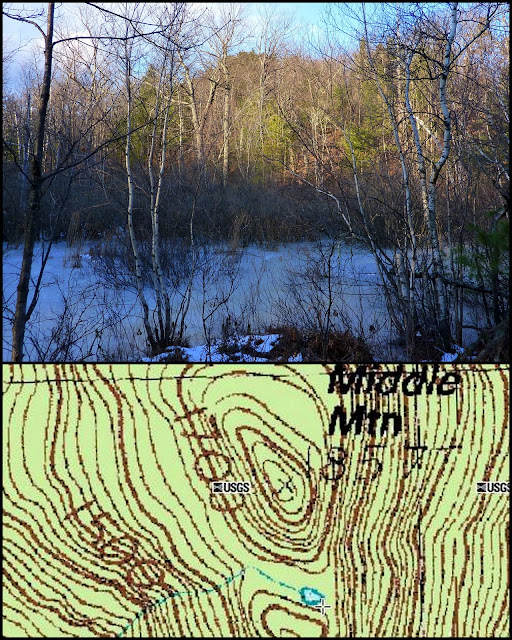 Very mixed conditions were encountered while hiking the Middle Mountain Trail en route to my short bushwhack adventure.  I wore Microspikes for 100% of the time, but only actually needed them for about 50% of the time.  Some parts of the trail were very icy, whereas other parts were completely free of ice and snow.  The woods surrounding the trail were predominately snow-free!  So "un-January"!!  The next snapshot combo shows the two types of conditions that existed at various points along the trail. 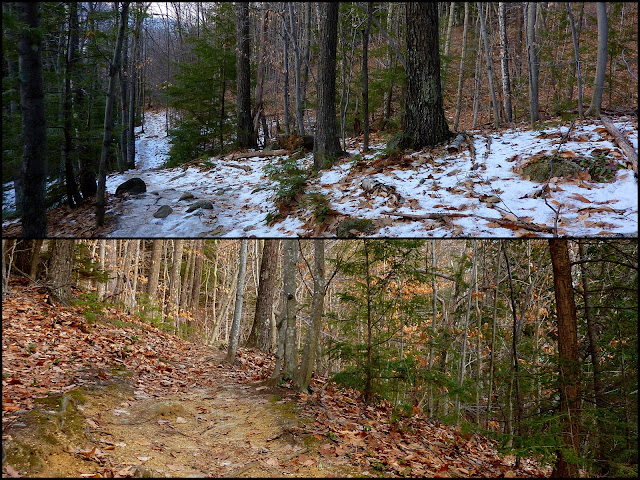 Not always, but oftentimes a bushwhack will lead to some other discovery.  The discovery resulting from this trek is as follows.  From the Middle Mountain summit, I came upon a herd path heading southward that led to the small pond that I mentioned above.  This herd path continued southward beyond the pond, but I didn't have time to follow it.  I'm assuming that this path might continue along the ridgeline and lead to Rattlesnake Mountain and possibly onward to Redstone Ledge.
From looking at the online map of the Green Hills Preserve (click HERE for link) I suppose one could construct a loop hike by starting at the trailhead on Thompson Rd, then hike the Middle Mountain Trail to Middle Mountain, and from there, follow the herd path to Redstone Ledge.  From Redstone Ledge, one could descend due west via a short bushwhack to pick up the Power Line Trail (a mountain-bike trail) and then head northward on this trail back to the trailhead on Thompson Road.
Or alternatively (to stay completely on land within the Green Hills Preserve), one could backtrack to Rattlesnake Mtn, and from there bushwhack eastward to the Mason Brook Snowmobile Trail, and then head northward to pick up the Black Cap Connector Trail and head westward on this trail to return to the trailhead on Thompson Road.
Shown below is a portion of the online map of the Green Hills Preserve area (click on map to enlarge).

To sum it up, these two mini-explorations provided something new to do, and "new" is always fun for me.

Nice report, John - I always wondered about that tiny pond south of Middle. The Green Hills Preserve is a real treasure!

The Green Hills are great. That bushwack path from the pond heads to Rattlesnake. From there you can head down east or west and combine it with mountain bike trAils to make some great loops. I'll try to send you a google earth file next week.

STEVE and KEVIN: Your comments are much appreciated!
Kevin, thanks for confirming that the path that I saw eventually leads to Rattlesnake. If you happen to get a chance to send the Google Earth file you mentioned, that would be great. My e-mail address is: randonneur8@yahoo.com

John, your pictures make me want to take a trek in the New England woods. I'm going to pass along your blog address to a friend of mine who lives in NH --- so she can have all the fun you're having!
Rita

Thanks Rita for posting a comment, and a big thank you for forwarding my Blog address to a friend . . . much appreciated! :)

John, from the Powerlines, we hiked up an old, well maintained path that followed a brook between Middle Mountain and Rattlesnake . It led to the trail that runs from Rattlesnake to Middle Mountain. At that trail junction, we turned left and in short time,reached the false summit of Middle Mt. Great views to the south! The trail continued to true Middle Mt summit where we then took the Middle Mt trail down to make a nice loop.

Excellent! Thanks for sharing this info, Sally! Sounds like a terrific loop! It has been put on my list of hikes to do this upcoming year. :-)