A Return for Another Peek from Bald Cap Peak

Sometimes some things are so good that you simply can't resist going back for a second helping.   For me, that certain something was the ledges on Bald Cap Peak located near Shelburne, NH.   It's an autumn treat that I wanted to get one more taste of, even though I had just visited there 2-weeks prior with my friend Steve.

I was really happy that I decided to make a return visit.  The autumn colors were much richer than before. 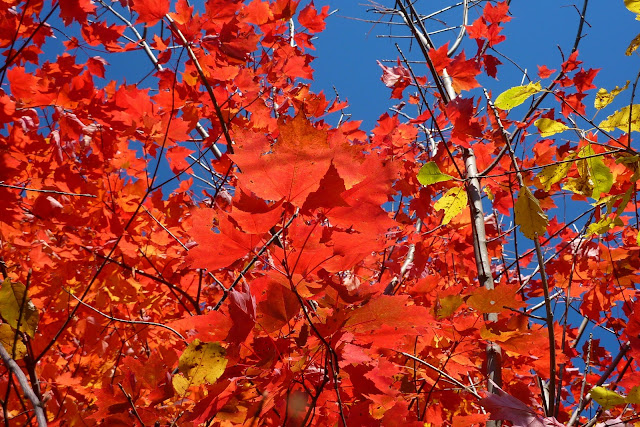 Shown below is approximately the same view, but photographed 2-weeks apart.  This further illustrates what a color difference there was between my two visits to these ledges. 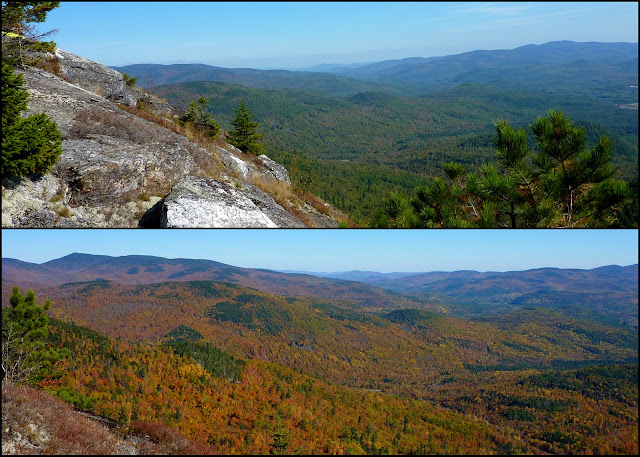 The next two snapshots were also taken from the ledges, and they serve to showcase the colorful autumn scenes on this 11th day of October. 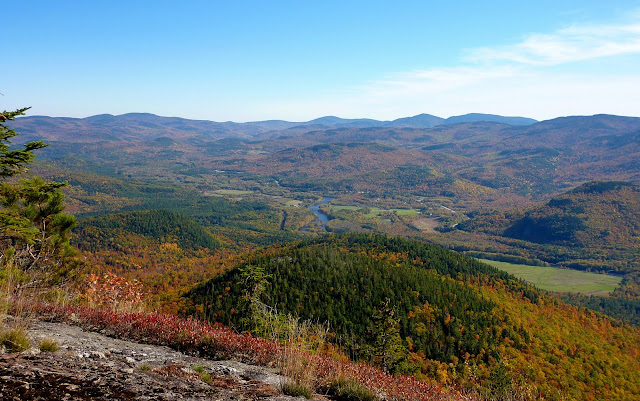 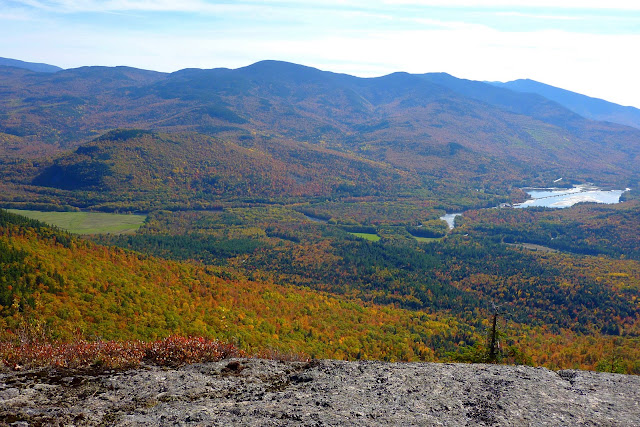 While exploring the ledges, I found cairns in addition to those already seen by Steve and I during our visit.  As I understand it, there might have been a brief period of time (over a half century ago) when a segment of the Appalachian Trail followed a route over the ledges on Bald Cap Peak.  Possibly, these cairns are the leftovers from that routing. (NOTE: See Addendum at the end of this report.)

Shown below is a snapshot of one of the old cairns. 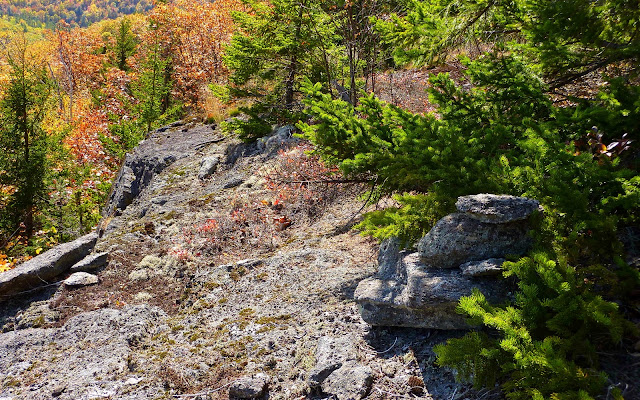 As already mentioned in one of my Blogs, getting to the ledges on Bald Cap Peak involves a bushwhack.  For this trek, the approach route was completely different from the frontal "attack" that was used for a similar adventure 2-weeks earlier.  This time, I left the Peabody Brook Trail at a point near the southwest end of Dream Lake and did an easy bushwhack of about a half-mile through open woods.
UPDATE: Since the time this report was written, the Shelburne Trails Club has constructed a hiking trail to Bald Cap Peak Ledges.  And therefore, a bushwhack is no longer required to reach this destination. Click HERE for more details).

After visiting the ledges, I returned to the Peabody Brook Trail and then continued northward along the trail for a brief visit to the viewpoint of Dream Lake at its northern tip.  I had a snack, and took a few photos (one of which is shown below). 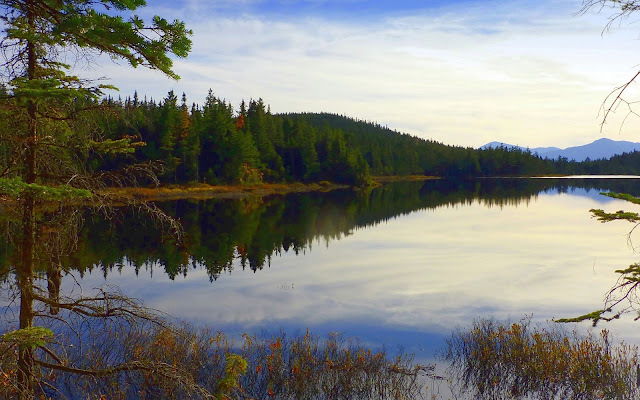 If you have recently been to Dream Lake via the Peabody Brook Trail, then you already know that beaver activity has created a large pool of water in the middle of the trail.  Fortunately, there is a workaround via a mini-bushwhack through the adjacent woods. 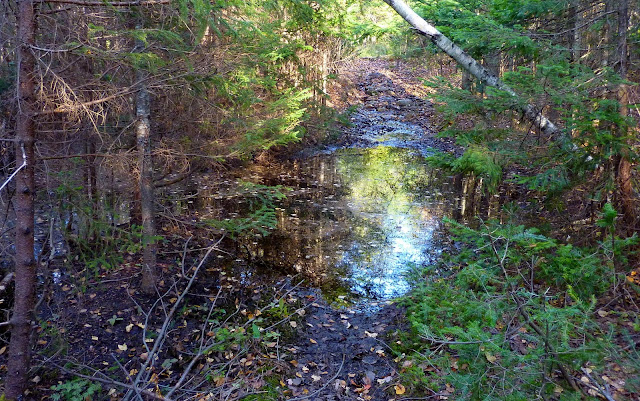 For the return leg of my hike, I simply followed the Peabody Brook Trail back to the trailhead.

Okay, the next photos have nothing whatsoever to do with my trek to Bald Cap Peak and Dream Lake.  They were taken in Sugar Hill, NH on the day prior to my trek.  I simply thought they were autumn photos which were worthy of sharing! :-) 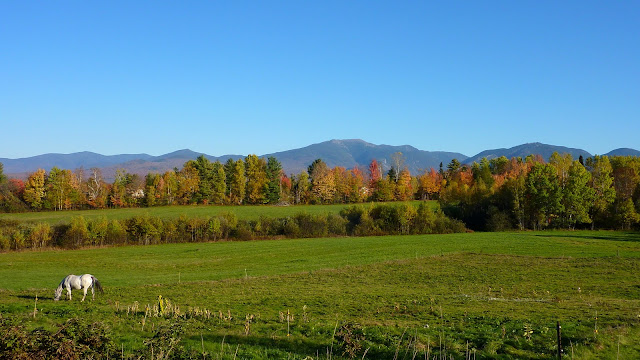 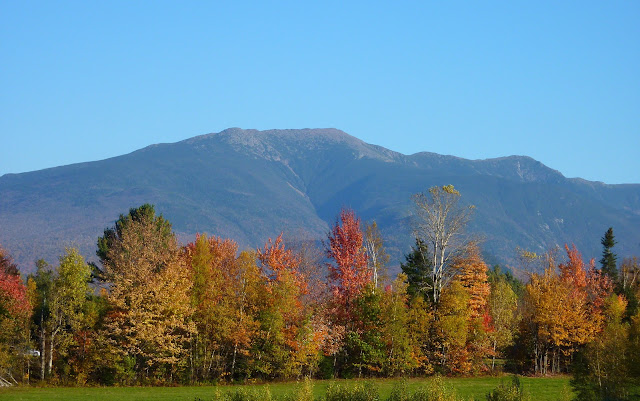 
ADDENDUM (Added 20-Oct-2011):
This addendum relates to statements made in the original version of this report pertaining to the Appalachian Trail.
Larry Ely has provided me with the results of some excellent research he did regarding the Peabody Brook Trail (PBT) and the Appalachian Trail (AT) as it once existed in the Shelburne area.   Larry has served in leadership positions with both the Appalachian Mountain Club and Appalachian Trail Conservancy, and he is the current President of the Shelburne Trails Club.
The AT followed the Mahoosuc Trail from Gorham to Mt. Hayes and beyond until 1952/1953 when it was rerouted to the PBT.  The sheet maps included with the  White Mountain Guide (WMG) for the 1940, 1948, 1952, and 1955 editions showed  the PBT traversing the south end of Bald Cap Peak (BCP) and then swinging around to its east side.  However,  there is no written description for such a route in the WMGs.  Starting with the 1953 supplement to the WMG (and all subsequent editions of the WMG) the PBT is distinctly described as climbing directly to Dream Lake on the west side of BCP (and thus NOT going over the ledges on the south end of BCP).
Even though the sheet maps for early editions of the WMG seem to show a route for the PBT that involves Bald Cap Peak, Larry feels that the AT itself never followed such a route.  However, he adds that at one point in time,  there might well have been a trail that followed such a corridor.

How incredibly ironic John. I did this exact hike Sunday. The only difference is that I visited Dream Lake first. Your photo of Dream Lake is fantastic. I also found a couple cairns on the ledges.

A great secluded spot to take it all in.

Joe, thank you for your comments!

That is indeed “incredibly ironic”! Wow! I wonder if the ledges there on Bald Cap Peak receive more hiker traffic than one would suspect?! Or perhaps, this is totally extraordinary that it received so many visitors in such rapid succession?!

Regardless, I've had E-mail correspondence with a staffer at AMC who indicated that prior to the present-day course of the Peabody Brook Trail (PBT), there was a brief period in time when the PBT went over the ledges on Bald Cap Peak (BCP). And of course, as many readers know, the PBT was once part of the Appalachian Trail corridor prior to the advent of the Centennial Trail. Although I certainly don’t know it for a fact, I suspect that those old cairns are leftovers from the day when the AT went over the ledges on BCP.

WOW! Those colors are vibrant! Certainly worth a second visit.

The colors in Crawford Notch were much better on yesterday's hike to Jackson (post coming soon) than on the previous week's hike to Willey. There was just ridge after ridge of autumn color in the lower elevations.

Thanks for sharing these vibrant fall photos. Autumn is my favorite time of year and I always enjoy seeing fall colors in different parts of the country.
Great pictures!
Rita
onedayinamerica.blogspot.com

SUMMERSET: I'll look forward to your blog report for your hike to Mt. Jackson. The views from there are so very nice!

RITA: Many thanks for your comments. Like you, I also enjoy seeing autumn photos from other parts of the country. The recent photos posted on your blog certainly inspire me to give serious consideration to visiting your part of the country next autumn!

I'm glad that rain from last week finally let up for a bit so we could enjoy the fall colors in style. I think I'll have to get up north to the Mahoosucs and Whites sometime before the foliage goes downhill too much. Thanks for the pics!

Ryan . . . love your statement that “any place that’s worth going to once is worth going to twice”. And obviously, I agree!
Hope you’re able to fit in a trip to the Mahoosucs/Whites sometime soon while there is still some nice autumn conditions to enjoy.

John, your colors are amazing. Love the first shot of the maple leaves! The cairns on the ledges are so cool too. If they, as you said, part of the old AT...it's a pretty cool piece of preserved history! The Sugar Hill shots from the day before are wonderful...you have some great autumn color and an awesome blue sky.

KARL: It’s terrific to read that you liked the report, and many thanks for all your very kind words!

I spent many of my growing up years living in the stone house at the head of the Peabody Brook Trail, which was then (in the 1970s) the AT. There was a big wooden sign at the head of the trail listing AT destinations, starting with Giant Falls one mile away and ending with Grafton Notch 26 miles away. I can't swear to it, but I think Bald Cap was listed on that sign as one of the waypoints along the AT. Parking used to be in the field on the other side of the North Rd., but someone bought that parcel and built a house, which I think is what led to the AT being relocated to Hogan Rd. sometime in the late 70s or early 80s.

Ted, thank you so much for taking time to add this very interesting comment to my Blog. So many things such as this are often irretrievably lost to history. Based upon the old cairns that I’ve personally seen on my wanderings between the Peabody Brook Trail and the ledges on Bald Cap Peak, it seems certain that there once existed some sort of trail in this corridor. Although there is apparently no written evidence to confirm that the AT once passed over Bald Cap Peak, I think there is a body of anecdotal evidence (such as your personal recollections) to suggest that it might have indeed done so.

Thank you for the blog and the memories it brings back whenever you post a hike in and around Shelburne. I'm going to be up on vacation next week. I'm thinking of taking my son up Mt. Moriah via the Rattle River Trail. I think I'd also like to take some time to admire the Shelburne Trail Club's handiwork.

Is the trail to Middle Mt. back in service from the Peabody Brook side? I used to hike it back in the early 80s when it was beginning to get very difficult to follow. One summer in my teens, I did trail maintenance with Ray Finnson, who lived across the street from the stone house (built by my grandfather, John Baker) I think Ray's Pond was named after him.

I think Shelburne may have some of the best view to effort ratio in the Whites. Hope to bump into you on the trail some day!

Ted, it’s gratifying to know that my blog brings back pleasant memories to you. Thank you for letting me know.

Regarding your question about hiking to Middle Mountain, there are actually two ways to get there now. Both routes are shown in a map posted in a more recent Blog about this area. To access this Blog report, you can cut & paste the link below into your Internet browser.
http://1happyhiker.blogspot.com/2012/11/trekking-to-edges-of-ledges-bald-cap.html

Of the two routes shown on the map, I personally prefer the one that begins at the Gates Brook trailhead.

That is so interesting that Ray’s Pond is named after a person with whom you did trail maintenance back in the early 1980s! Thanks for sharing that information. I’ve wondered who “Ray” might be!

I totally agree with your assessment about Shelburne having “some of the best view to effort ratio in the Whites”!

Happy trails to you and your son when you are in the Shelburne area on vacation!