The title of this Blog report "Autumn at Owl's Cliff" seems like it would be a great title for a novel.  But, this report will just be a "short story", at best.
My trek to Owl's Cliff was 9.4 miles round-trip.  As outlined on the map that is shown below, the route involved walking Rob Brook Road, plus hiking a segment of the Brunel Trail, as well as hiking the short spur trail to Owl's Cliff.
(Clicking on the map, or any photo, will enlarge the image.) 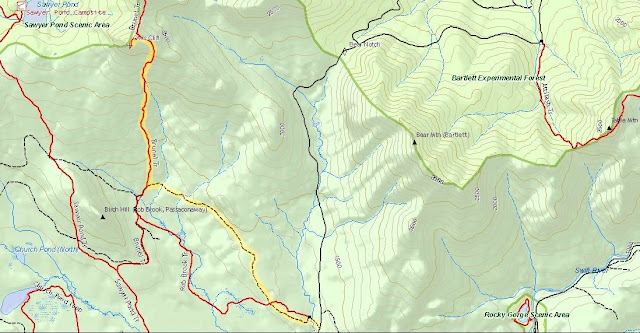 The walk along Rob Brook Road is pleasant, especially during the colorful autumn season.  Shown in the next photo is a typical scene along this road. 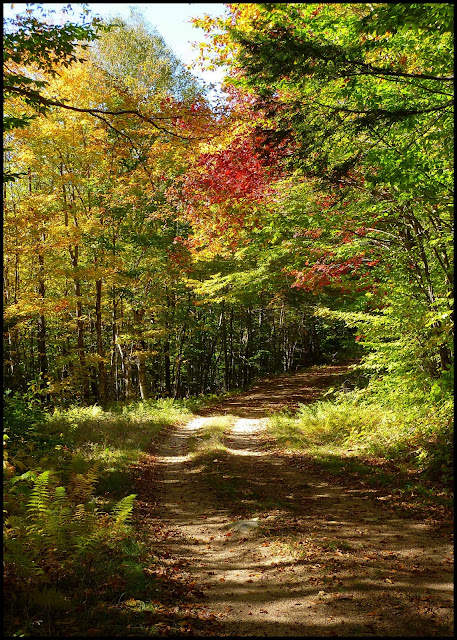 Upon arrival at the Brunel Trail, I noticed that the sign said 2.7 miles to Owl's Cliff, whereas my map showed 2.1 miles (1.9 miles on Brunel Trail + 0.2 mile on the spur trail).  I don't know why there is mileage discrepancy.  But regardless of the actual mileage, I made it to Owl's Cliff in just a tad over an hour after leaving Rob Brook Road. 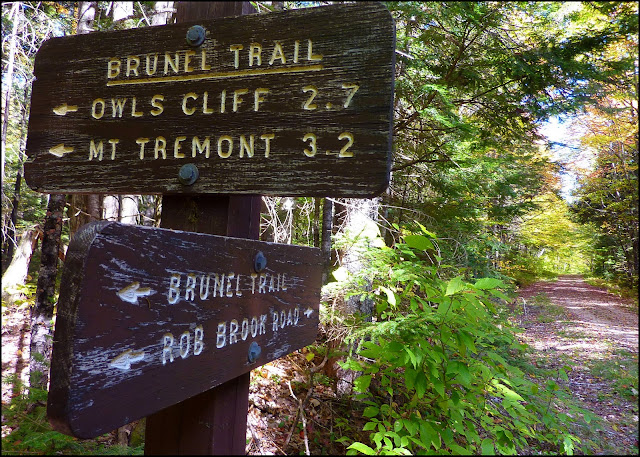 Just before reaching the viewpoint on Owl's Cliff, there is a very old sign (shown below) which gives a brief history of the 1963 fire that occurred there.  I was tempted to pull out my handkerchief and give it a cleaning, but opted not to do so.  Maybe next time! :-) 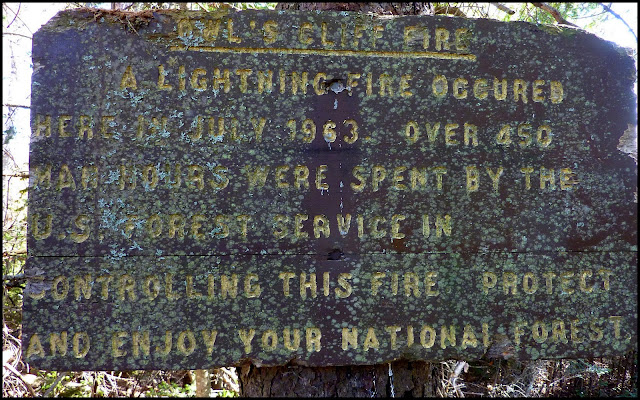 I arrived at the Owl's Cliff viewpoint and was greeted by a remarkable display of autumn colors.  The combination of my plain-vanilla "point and shoot" camera, plus the angle of the sun, resulted in photos that don't do justice to what was seen in-person.  Nonetheless, shown below are a few scenes.  Perhaps these snapshots will be good enough to provide some idea of the views on this 10th day of October 2011.
High peaks in the Sandwich Range as seen looking across the lowlands filled with autumn colors. 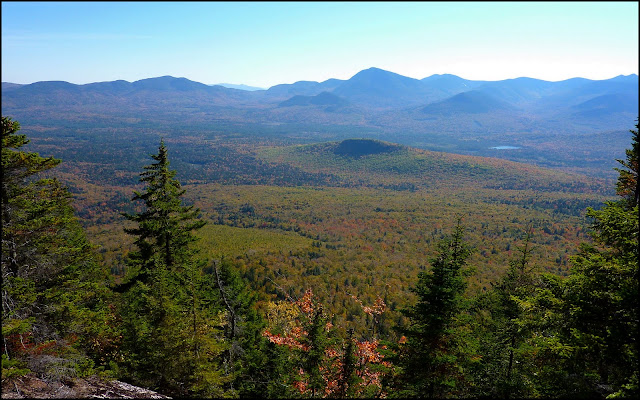 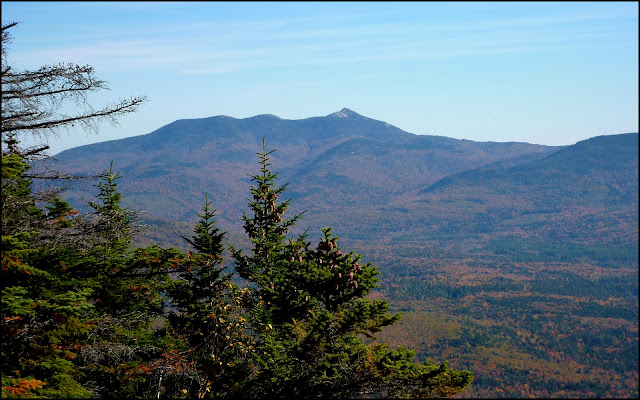 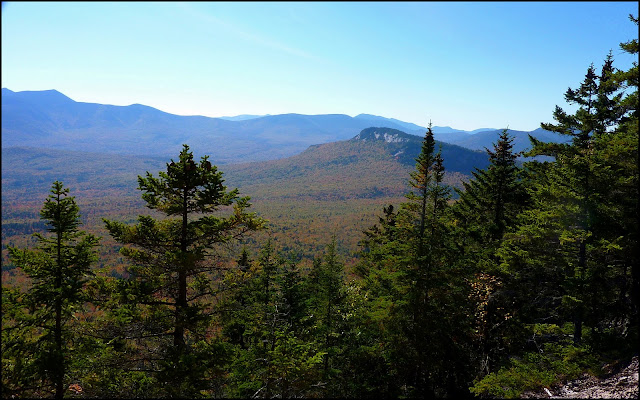 The main viewing ledge on Owl's Cliff, as seen from a lower ledge 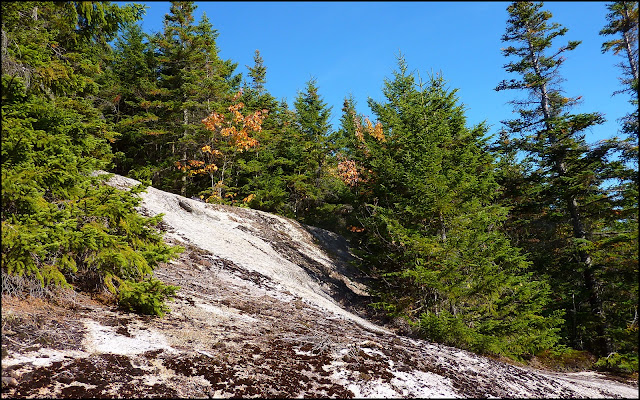 As with many of my hikes, I got my usual late start (near the "crack of noon"). Therefore, I didn't have a lot of time to do much exploration once I arrived a Owl's Cliff.  However, I did tramp through the woods for a distance in sort of a northwesterly direction away from the main cliffs.  I came to one precipice that was quite "airy".  The next snapshot shows a view from there. 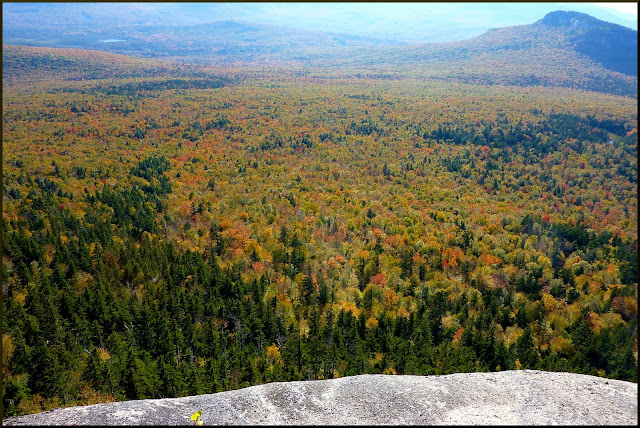 Steve Smith, who is the consummate adventurer, has done some excellent off-trail explorations in this area.  (Click HERE for a report.)   Steve found locations on Owl's Cliff which enabled him to get some unique unobstructed views "around the corner" toward the Carrigain Notch.  The best I could do was to find a "through the trees" view that included Sawyer Pond and The Captain.  The result of my meager effort is shown below. 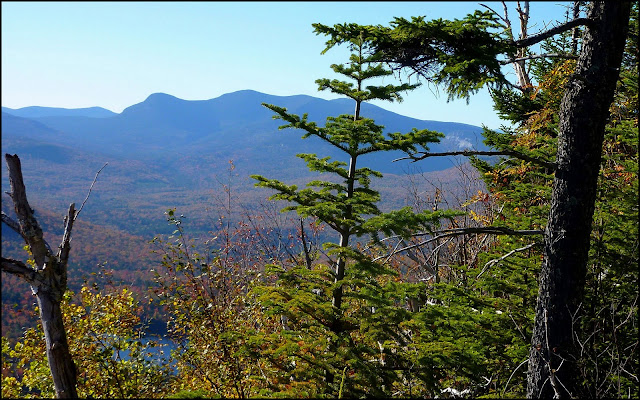 To sum it up, it was another terrific day to be out hiking in the Whites.  But, it was especially sweet since it's autumn and at the colors are nearly at their peak.
Posted by 1HappyHiker at 10:12 AM

Ahh, you have a nice way of laying out a trail route that we'd like to try. We seem to follow in your footsteps! Last year we hiked the Rob Brook Trail as far as we could before beaver flowages turned us back. I think the Forest Service may have since closed a section of that trail. So, our next attempt will be Rob Brook Road to Owl's Cliff. Thanks for the idea John.

Thank you Ellen for posting your comment.
Regarding following in my footsteps, I’m truly honored! But just a word of warning . . . beware of those steep precipices that I sometimes encounter during my off-trail ramblings . . . sort of like the one pictured in the next to last photo of this Blog report! :-)