Almost exactly one year ago I did a hike along a portion of the Tunnel Brook Trail. And, as part of this hike, I incorporated a short bushwhack to the cliffy rock slabs on the eastern side of Mt. Clough. My Trip Report for this hike was posted on the public Forum named "Views from the Top", more simply known as VFTT.  Please click HERE if you'd like to take a look at that report.

This past Saturday (18-June), my friend Marty and I did a hike similar to the one described above.  The major difference is that our plan was to include a visit to Mud Pond (located near the southern end of the Tunnel Brook Trail), whereas my hike last year did not include Mud Pond.
The Tunnel Brook Trail runs through the deep valley between Mt. Moosilauke and Mt. Clough.  And speaking of Mt. Clough, I was surprised when I first learned that the pronunciation of this mountain rhymes with words like "rough" or "enough".  Also, it was surprising to read in Steve Smith's book (Ponds & Lakes of the White Mountains) that up until the 1920s there was an automobile route through this notch which served to connect the Benton/Easton area with the Glencliff/Warren area.  Considering all the ponds and bogs that are now present here, you'd expect that the road was closed due to flooding from beaver activity. But apparently, landslides were the reason that this roadway was closed and never reopened.


If you've ever hiked the Tunnel Brook Trail and/or looked at a trail map, then you know that your trek takes you along the shoreline of a long chain of beaver ponds in this valley.  If you were to follow the trail all the way to its southern end, you'd find yourself at close proximity to the trailhead for the Glencliff Trail which leads to Mt. Moosilauke.  Many folks do a loop hike over Mt. Moosilauke using the Tunnel Brook Trail, Glencliff Trail and Benton Trail.
On this particular day, our goal wasn't to do a loop hike.  Instead, our only intentions were to begin at the trailhead on Tunnel Brook Road and hike the trail to the south end of Mud Pond.  Our plan was to return via the same route, and during our return we would do a short bushwhack up to what I call the "Cliffs of Clough".


I was happy that our trek included Mud Pond.  As seen in the photo below, there is a very attractive vista looking northward from the south end of this pond. 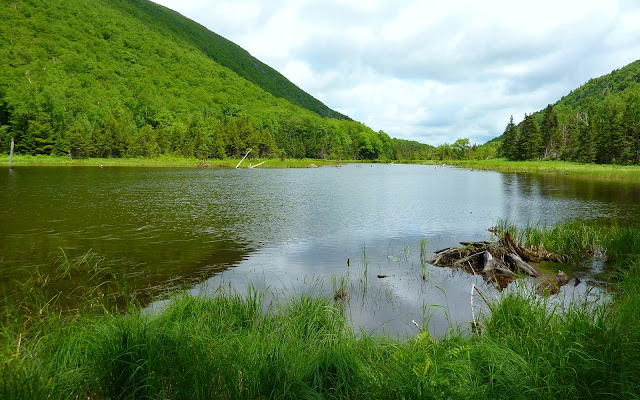 And apparently, the frogs are happy with the view and enjoy living here.  There is an abundance of these handsome green guys who refer to this pond as home! 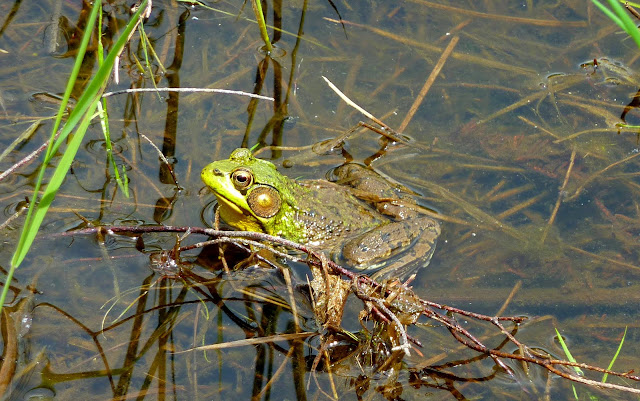 In addition to Mud Pond, there are other very attractive views from the shoreline of other beaver ponds along this trail.  An example of one such view is shown in the photo below which features Moosilauke's South Peak and Slide Brook Ravine as seen looking across one of the unnamed beaver ponds. 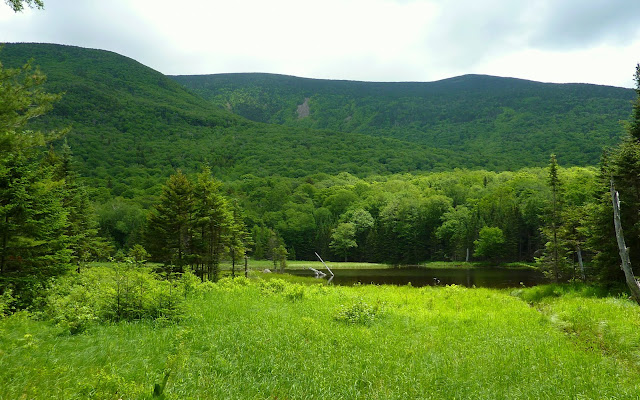 A mentioned earlier, our trek also included a short bushwhack up to the lower portion of the "Cliffs of Clough".  This rocky area above the pond can clearly be seen in the snapshot below. 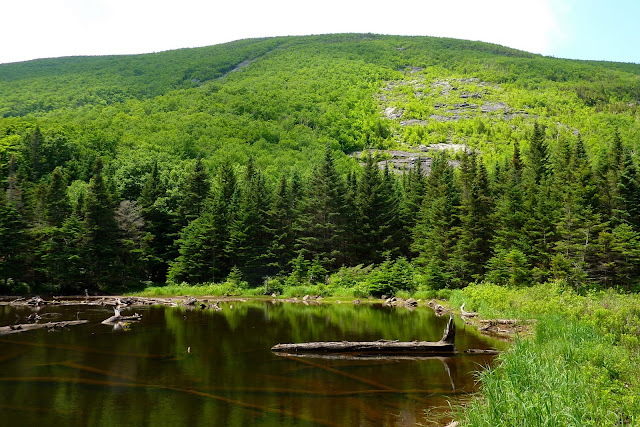 I'm still amazed at how easy it is to get up onto this cliffy/ledgy area.  Within 15 minutes from leaving the Tunnel Brook Trail, you can be far enough up to get views such as shown in the next few photos.


There is a bird's-eye view of many of the ponds in the Tunnel Brook area (see photo below). 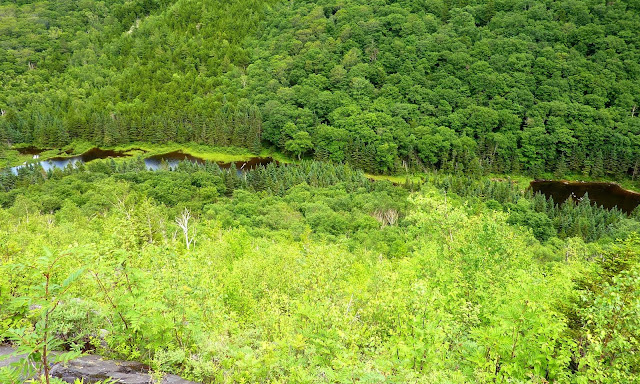 Also, as you look northward up the Tunnel Brook valley, off in the distance you can see peaks in the Pilot Range. 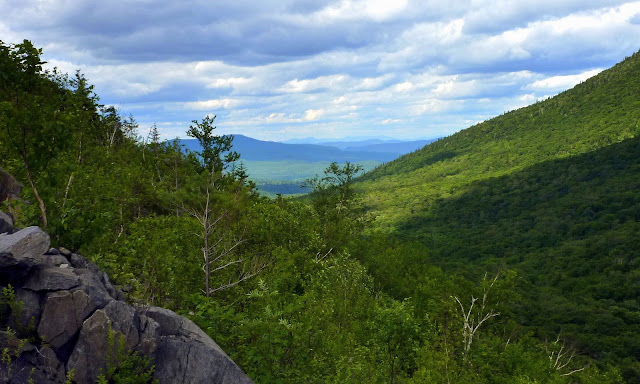 Growing in the cracks of the rocks are various types of common wildflowers and sedges.  I found the Cotton Sedge (shown below) to be particularly fascinating. 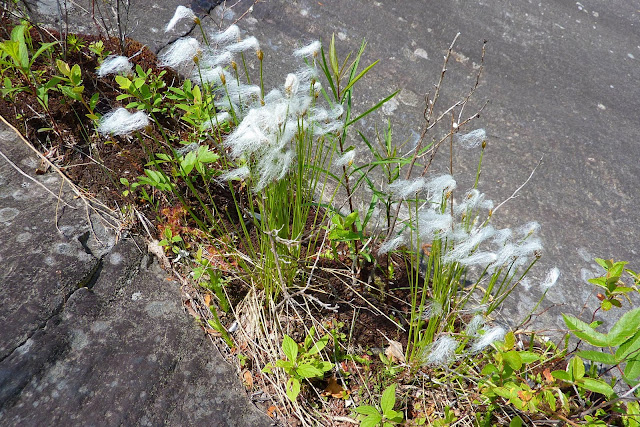 Our trek to the "Cliffs of Clough" concluded our hike.  As Marty and I were returning to the trailhead, we were discussing whether to go on another short hike since we still had a few hours left before we needed to return home.  Along the trail, we met Mike and Evelyn who live in nearby Benton, NH.  I'd met Mike once before, but didn't recognize him, but he remembered me.   Anyway, Mike solved our hiking dilemma by suggesting a hike to an unnamed cascade located about a half mile off the end of a gated Forest Service fire road.  Since we'd be driving right by this road on our way home, we decided to embark on this adventure!


We found the cascade without difficulty.  It was about a 2 hour round-trip hike.  As we discovered once we go there, it's not merely a single cascade, but rather a chain of cascades.  Shown below are a couple of photos taken at various points along this chain. 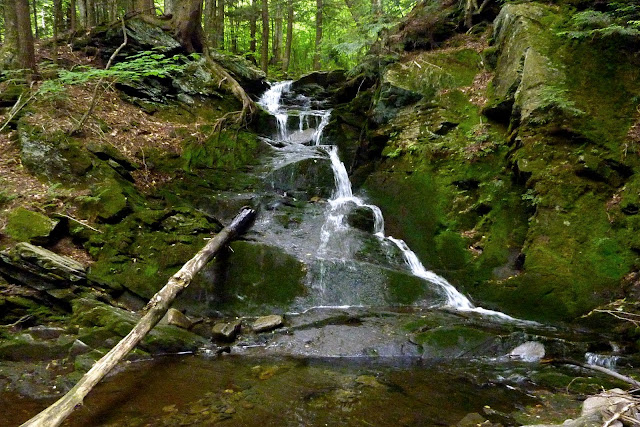 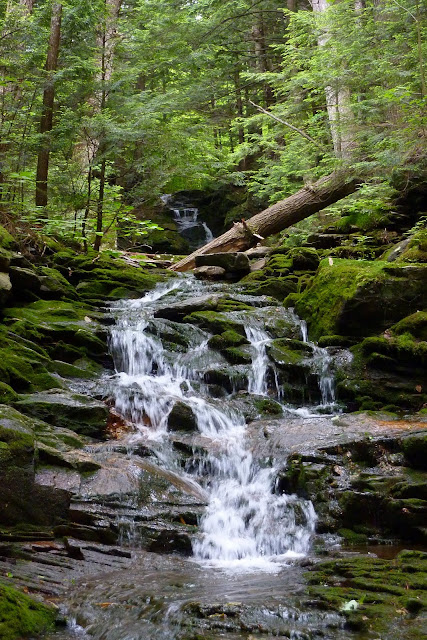 It was an odd feeling not knowing exactly where we were hiking to.  Once we arrived at the cascades, I pulled out my GPS and got a rough idea of our location.  I took a waypoint for downloading at home onto a topo map, and it was interesting to see that these cascades are only about a half mile west of Route 112.  They are located on an unnamed brook that is sort of at the mouth of a small ravine located north of the Stark Falls Brook drainage.

The cascades were very nice, but we paid a price for having this fun adventure.  On both the outbound and inbound leg of our trip, we had experiences that were comical in retrospect.  On the way to the cascades, we were followed and harassed for about a 100 yards by a very angry and aggressive grouse who was charging, squawking, and flapping at us throughout this encounter.  Then, on our return trip, we got caught in torrential hailstorm and were pelted with marble size pellets of ice!  I had a small umbrella in my pack which I brought out for the two of us to huddle under.  This provided some protection, but any body part outside the "umbrella of safety" was subjected to the sting of the icy pellets.
I didn't get a photo of the attack by the irate grouse.  But, I did take a snapshot of the hailstones! 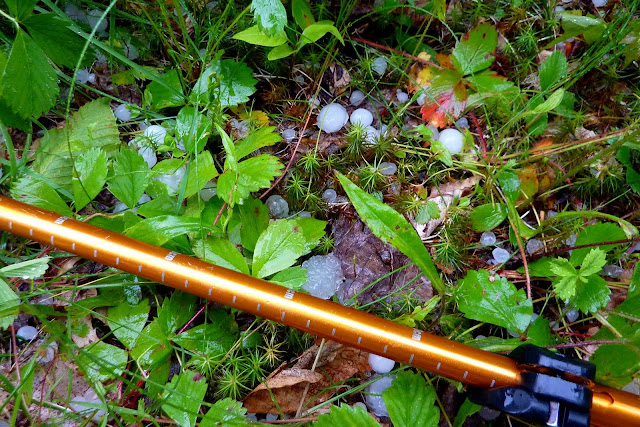 To sum it up, our day of hiking ended up being a far greater adventure than Marty and I had ever thought it would be when we left home to do a mild-mannered trek along the Tunnel Brook Trail.   However, we know from our previous hikes that we frequently improvise upon our original plan as we go along.  In so doing, we sort of expect the unexpected.  And so, in many respects, the final outcome for this day of hiking wasn't overly surprising, given our history!
Posted by 1HappyHiker at 5:52 PM

here is my blog about hiking in Bosnia, please take a look :D

Tomba . . . thank you for your comments. I have looked at your Blog, and I can see that you also have some very beautiful places for hiking in your part of this planet named Earth!

Excellent report, John! That is one of the nicest quiet corners of the Whites. Several of the Clough slides give somewhat different perspectives on the ponds.

I wholeheartedly agree with your comment about the Tunnel Brook area as being one of the nicest quiet corners of the Whites.

And yes, those cascades were quite nice. They sort of reminded me of some of the cascades in the northern Presidentials that you can reach by hiking various trails which begin at the Appalachia trailhead.