A Loop around King Ravine, Plus a Side-Trip to Mt Adams

What delightful weather it was on 21-June!  Mostly sunny skies, low humidity, and the air temperature and wind were both moderate!  To make the most of these terrific conditions, I wanted to do a trek that would take me above tree-line, and would incorporate a trail that I'd never hiked.


The hike I finally decided to do was a 9.3 mile loop that goes around the tops of the walls surrounding the King Ravine, plus this trek also incorporated a trip to the summit of Mt. Adams.  And, I was able to include a trail in this loop that was new to me, i.e. the Spur Trail.  This trail ascends the west wall of King Ravine.  It leads from the Randolph Path (just above the junction with the King Ravine Trail) to Lowe's Path (just below Thunderstorm Junction).


Shown below is a GoogleEarth image of King Ravine with my route highlighted in yellow. The trails involved in my loop were: The Link; Amphibrach; Randolph Path; Spur Trail; Lowe's Path; Gulfside Trail; Air Line Trail. 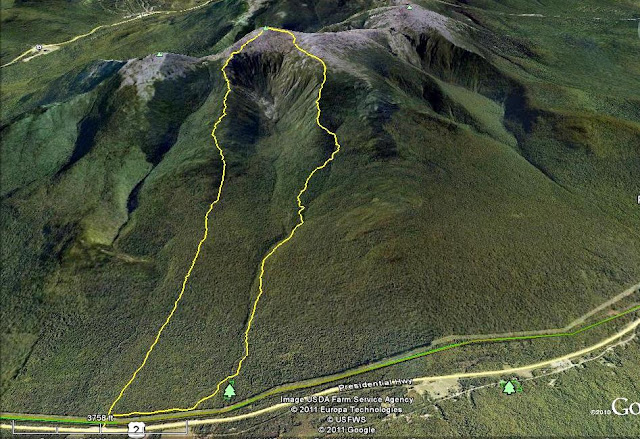 As mentioned above, the Spur Trail was one that I had never hiked.  It was awesome!  The footing was good, and it was no steeper to climb than other trails leading up to the Presidential Range.  There were a number of interesting things to see along the way.  On the lower portion of the trail, a short spur path leads you to Chandler Fall where the Spur Brook runs down a huge slab of rock.  This cascade would probably be much more impressive at times of high water, but it was still a scenic spot even with a reduced flow of flow.
Chandler Fall 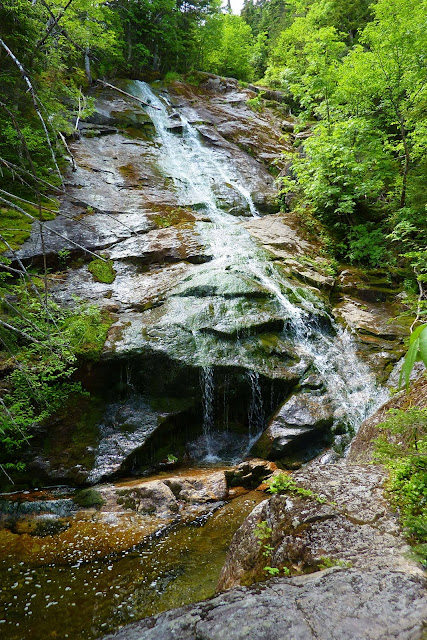 About a third of the way up the trail is a spot called Lower Crag.  Here I got my first peek into the massive King Ravine.  From this point forward, there are other views into the ravine.  Two of the more notable viewpoints are Upper Crag (location of RMC's Crag Camp), and then further up the trail is the Knight's Castle outlook. 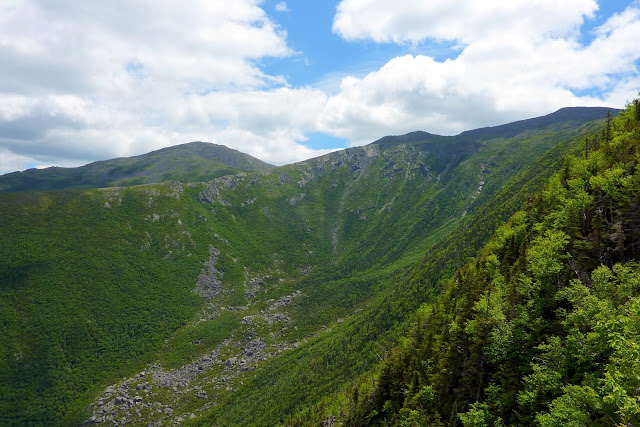 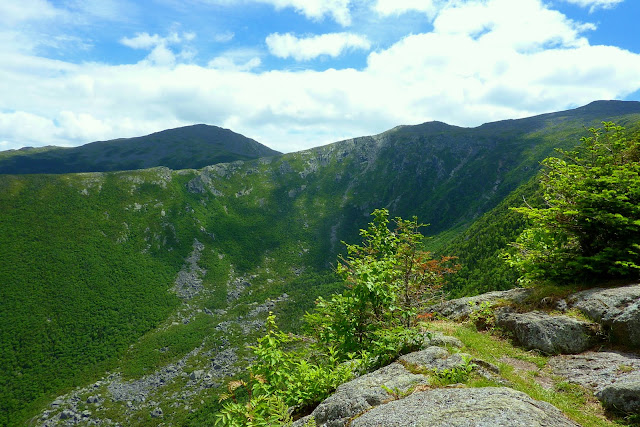 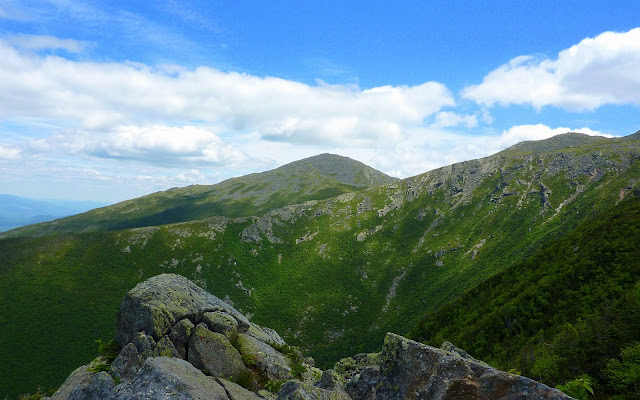 Mentioned earlier was Randolph Mountain Club's (RMC) hut named Crag Camp.  Since this was my first time on the Spur Trail, it was obviously my first time to visit this structure.  It is impressive!  Shown below is a shot of the exterior and interior of this attractive mountain hut.
Crag Camp 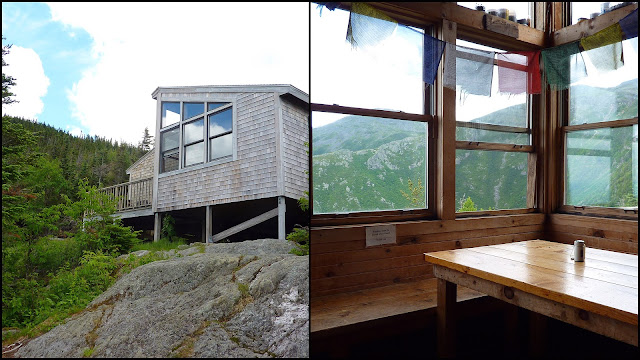 The upper third of the Spur Trail is above tree line.  Besides the beauty of the surrounding alpine vistas, the trail itself is quite scenic (photo below). 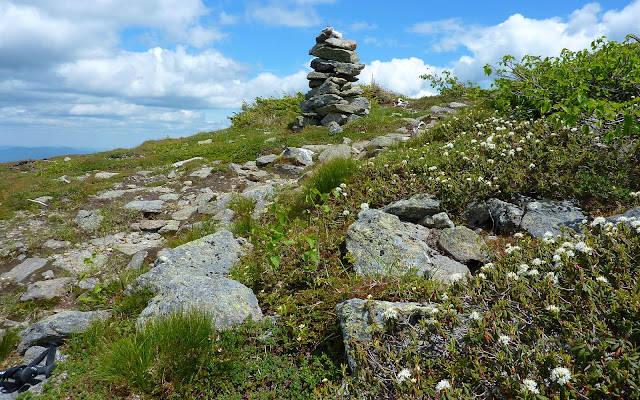 The next snapshot was taken from the Spur Trail shortly before it ends at Thunderstorm Junction.  Mt Adams is seen on the horizon at the top right-side of the photo.  Although this mountain looks very imposing from most other perspectives, it certainly is less intimidating from this vantage point! 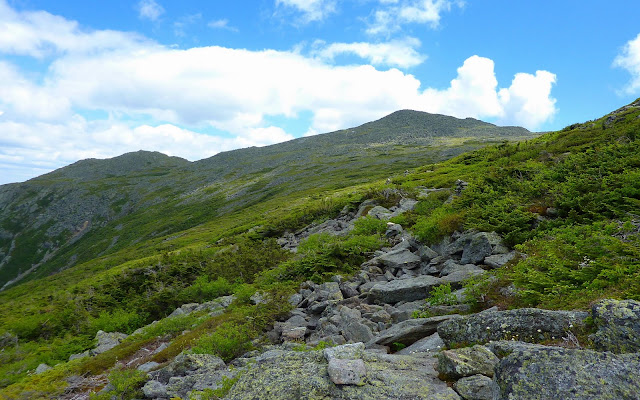 From the top of Mt Adams are magnificent 360 degree views.  Rather than present photo after photo of these views, I'll be a bit selfish and just show two of my personal favorites!  The first one is the view toward Mt Washington, and the second view is Mt Madison, the next door neighbor of Mt. Adams.
Mt Washington (and Auto Road on left) 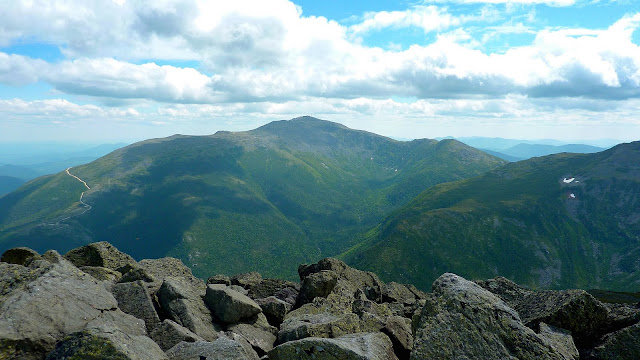 Mt Madison (and tiny Star Lake at base of the mountain) 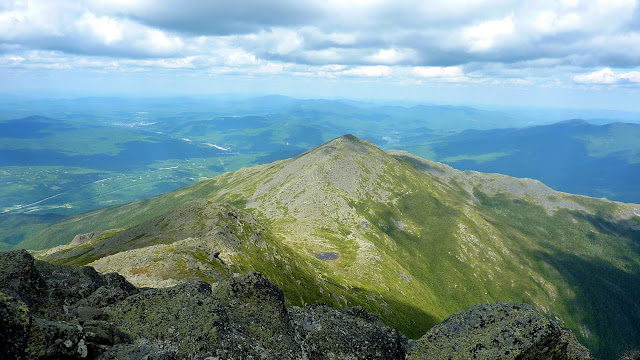 Shown below is yet another photo of Mt. Madison.  It was taken near the junction of the Gulfside Trail and Air Line Trail.  Of course, the building seen nestled at the bottom of the mountain is AMC's newly refurbished Madison Spring Hut. 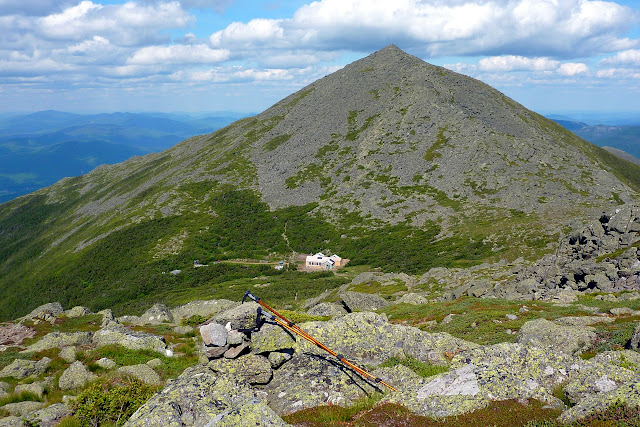 The next photo was also taken from the Gulfside Trail.  It is looking northward over the lip of the ravine.  On the left side is the ridge that I climbed earlier in the day using the Spur Trail.  And on the right is Durand Ridge which was used for my descent via the Air Line Trail.  (Just as a side note, if you click on the photo below to make it larger, you can just barely see the Crag Camp resting atop the ridge on the left.  It's a tiny white dot about halfway up the ridgeline.) 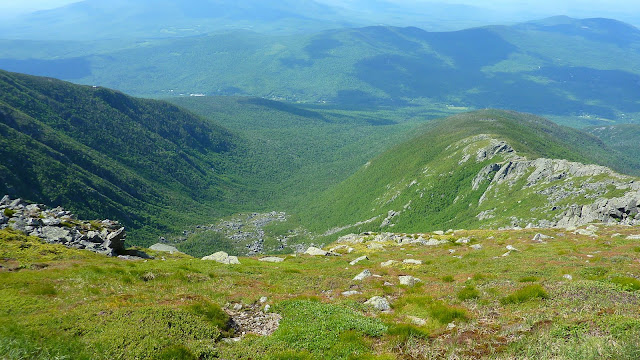 Many wildflowers were seen while hiking my route.  The photo below provides a sample of many of these colorful beauties. 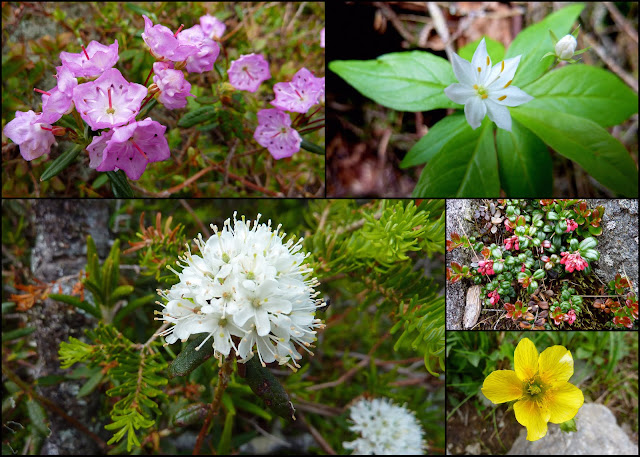 And so, to sum it up, all days spent hiking the mountains are good, but some are better than others.  This particular hike will be added to the "better" column in my book!
Posted by 1HappyHiker at 8:54 PM

Great report and excellent photos as always! Tuesday was indeed a great day to be above treeline - that rare combination of low wind and sunshine does not happen too often.

That is one heck of a loop, too. I did a similar trip on the last day of May, except in reverse. Those views down the ravine from Durand Ridge and Knight's Castle are just amazing. Your photos capture that sense of vastness perfectly!

Neat to see that just a few weeks changes the alpine wildflower coat!

Did you by chance do the short bushwhack to Canyon Falls? It's a short way below Chandler, midway between the falls and where the trail touches the stream again. I didn't read about it until after I got home from my last trip. Something for next time, then!

Thanks for sharing these, John - it's always fun to visit your blog!

Nice pics and I agree with your summary. I hiked a very similar route last year, and loved it. Looks like you had a great day for it...

@NeoAkela: Chris . . . thanks for your comments! I just read on the VFTT forum about your trip to the Presidential Range that was done on the same day as my trek. Excellent trip you did, Chris!

Regarding your question about Canyon Falls, I had thought about including this as part of my agenda for the day, and I even had a waypoint for it in my GPS. However, once I was on the trails, I eventually decided against it for a couple of reasons. When I came to Spur Brook (shortly after the Pentadoi) I looked at the water flow, and I looked at my watch. The water flow looked meager, and my watch showed “lateness”! So, I talked myself out of doing this short bushwhack by rationalizing that it might not be worth it considering the low flow of water. And, as you know, sometimes even a short bushwhack can really eat into your time (which was in short supply for me since I got my usual late start near the ‘crack of noon’!). When I reached Chandler Fall and saw how little water was flowing over it, I felt better about my decision to forego the bushwhack to Canyon Fall. Undoubtedly, knowing the two of us, we will both eventually visit this spot as part of some other adventure!
-----------------------------------------
@Mark B: Thank you Mark for posting your comments! And yup, you’re absolutely correct. I did indeed have a great day for doing this hike. It was one of those special days in the mountains when the weather conditions are simply divine!

Gorgeous pictures. It looks like you had a wonderful day above treeline. The loop that you did was a real good one also. I may have to copy. Thank you for your inspiration!

Thank you Heather for your very kind comments . . . much appreciated! It’s great to read that you’re inspired to give that loop a try. I think that most Bloggers would agree that it’s sort of a measure of success when others are inspired by something that was written in their Blog.

By the way, I have a daughter who is also named Heather!

What a beautiful day you had - thanks for sharing the gorgeous, crisp photos!

Great trip report and terrific photos! My wife and I have not done any of the RMC trails but they are on our list! The Google Map view of your loop is a great idea.

@ Summerset: Thanks as always for your generous comments! Speaking of gorgeous photos, I just became aware that you also have a Blog (Peakbagging New Hampshire's 48 4,000 Footers), and you have posted some excellent photos on your Blog. I’ve subscribed to your Feed.
------------------------------------
@ Anonymous: It’s terrific to read that you liked the report and photos! And regarding the GoogleEarth image of the loop I hiked, we can thank the folks at WMG Online for including such a cool feature in their software which allows you to interface with GoogleEarth and create images such as used in my report.

Awesome views and terrific photography. As a fellow blogger I am quite jealous of your images. I also use blogspot, but it has it limits. Do you create the photo collages in Photoshop and then drop them into your blog?

We're inspired to head to the higher elevations this weekend to catch some of the summer bloom.

Ellen . . . I’m truly humbled by your kudos about my photos! Thank you!

In answer to your question, I create my photo collages via Picasa, and then drop them into my Blog directly from the Picasa album I’ve created for my hike. If this doesn’t answer your question, by all means, please feel free to post another comment on this Blog, or send me an E-mail at randonneur8@yahoo.com.

Lastly, you mentioned that you are a fellow Blogger. What is the web address for your Blog?

Your pictures are so incredible. Thanks for sharing them. I would love to try this route next year during the summer where the days are longer. This will be a incredible challenge for me because I am not a fast, strong hiker. At 56 years old, I have my share of breaks. I can't wait to try it.

RODNEY: I’m very appreciative of your kind comments! You have my very best wishes for a fun hike doing a King Ravine loop-hike next summer.