Within the next few days, a detailed report about this loop hike in the Caribou-Speckled Wilderness area will be available at my hiking partner's excellent Blog entitled "Mountain Wandering".  Steve does a much better job than I could ever do when it comes to presenting details about a hike such as this.  I'll add a direct link to his report once it appears on his Blog.
UPDATE (16-May-2011):  Steve's detailed Blog report is now available.  Click HERE for the link to it.

I'll just briefly state that three of us participated in this hike in the State of Maine on 12-May-2011: Steve, John G., and me (John C.). The on-trail portion of this loop was 10.3 miles. We did a couple of short off-trail forays which increased the total mileage by a few tenths of a mile. The trails involved in this loop were: Miles Notch Trail; Red Rock Trail; Great Brook Trail. Our route is highlighted on the map below. (NOTE: Clicking on the map will slightly enlarge it.) 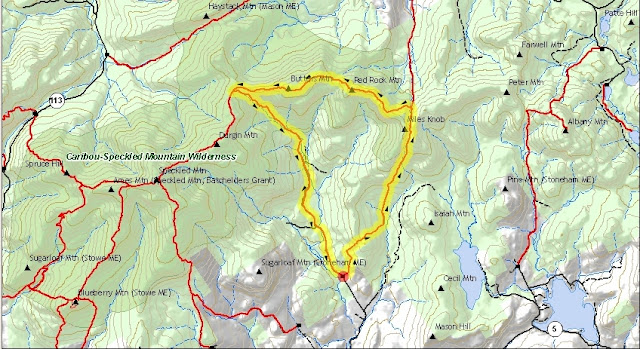 The highlight of this hike, at least for me, was visiting the massive cliff just a bit east of the summit of Red Rock Mountain. Shown below is a snapshot of this cliff that was taken last autumn from a spot named Lord Hill. 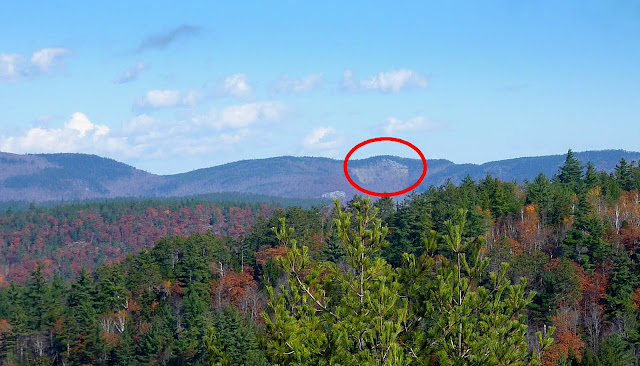 Shown in the photo below is Steve on one of the ledges atop this massive Red Rock cliff. 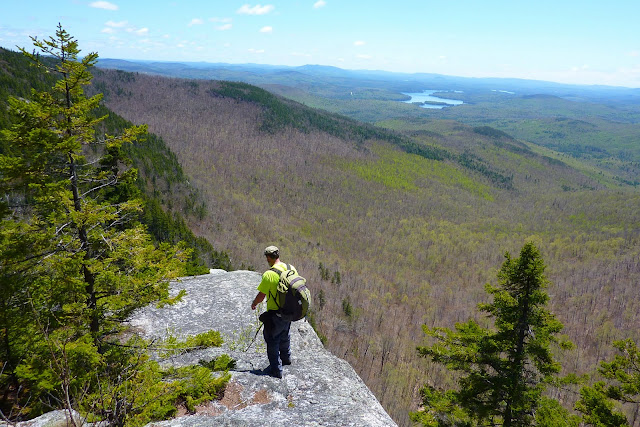 And, the next snapshot shows a portion of the red-tinged cliff-face that can be seen by peering over the edge. 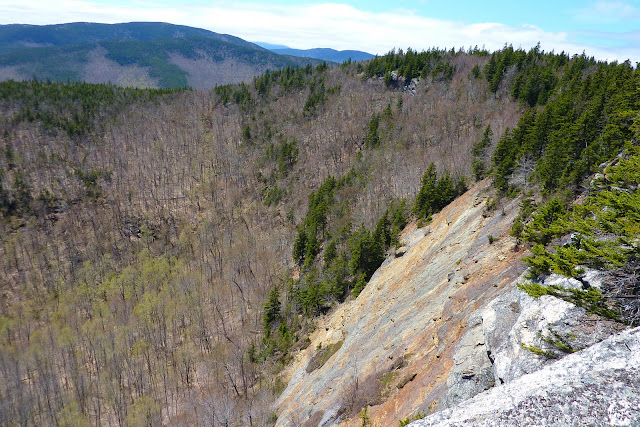 There are numerous very striking vistas to be seen from the cliff on Red Rock Mountain, and at several other lookouts along this loop. Shown below is just a small sampling.

A southwesterly view showing Kearsarge North and portions of the Moats, Chocorua, Passaconaway 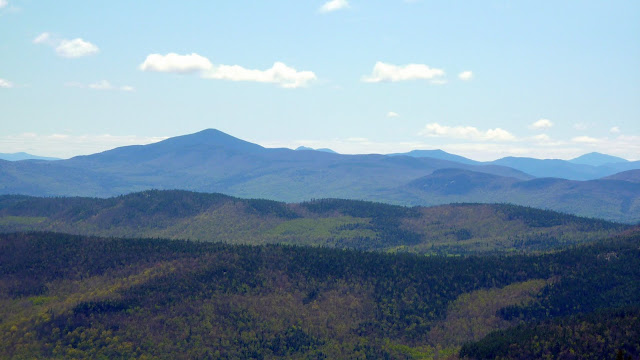 A due south view showing Kezar Lake and Pleasant Mountain 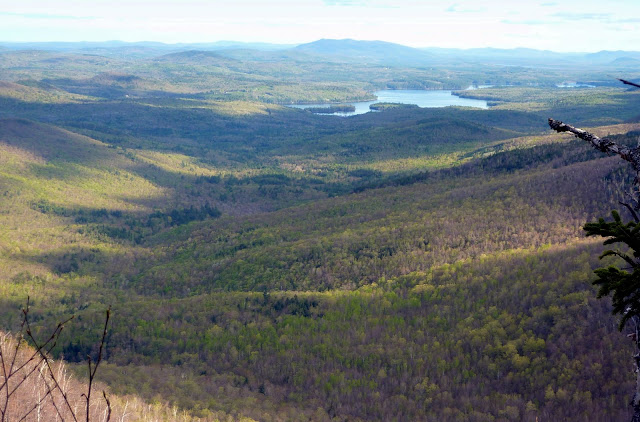 A highly-zoomed view to the west showing Mt. Washington 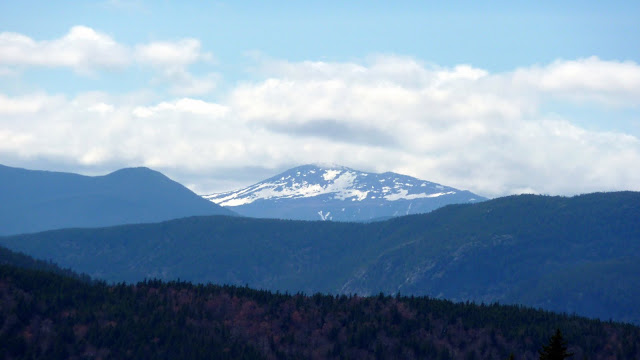 And besides the distant vistas, there were many lovely things to see that were much closer. For example, there were numerous wildflowers in bloom. Shown below is a collage of several of the flowers that were seen. 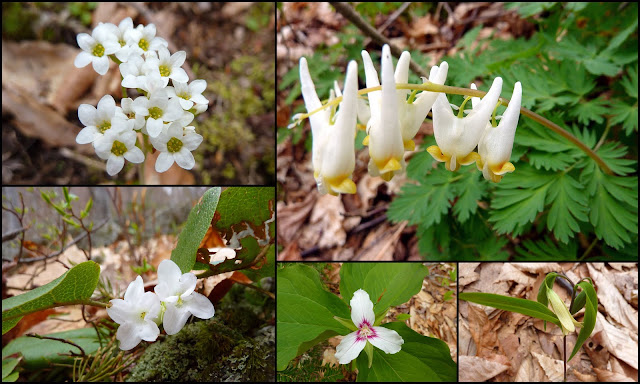 The snapshot shown below is by far NOT the best photo ever taken of a turkey vulture! However, we enjoyed watching this guy perform aerial acrobatics as we sat atop the Red Rock cliff. 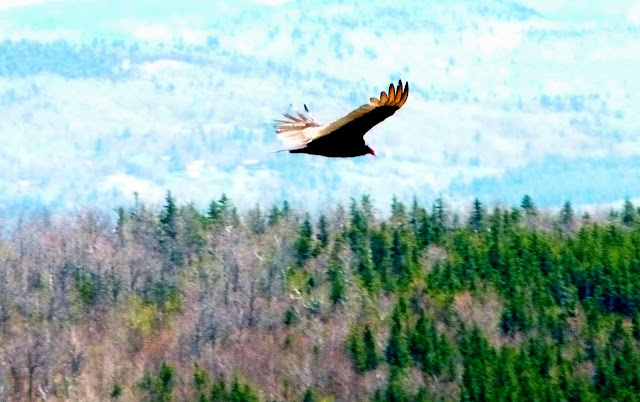 Toward the end of our loop, we stopped to take some snapshots of a picturesque cascade along Great Brook. Sunset was fast approaching and so the lighting wasn't the best. 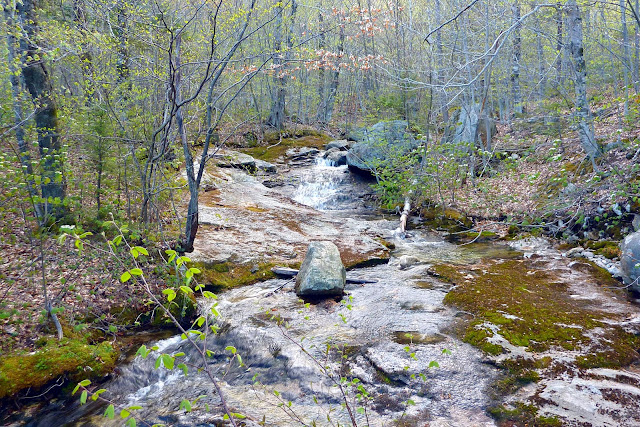 And, shown below is just one final photo. It shows a couple of old porcelain trail signs that we encountered along our route. I'm certain that Steve will provide more details about these signs in his report. 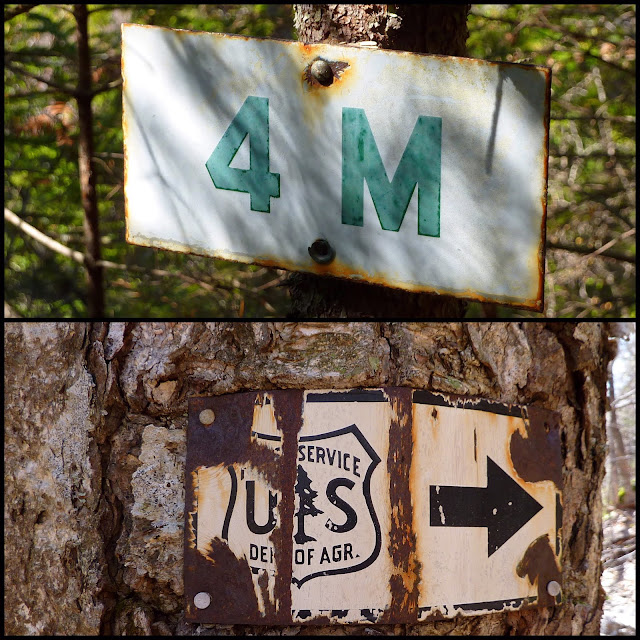 To sum it up, please keep an eye out for Steve's report on his Blog. As indicated earlier, I'll update my Blog to include a direct link to his report once it's available.

--------------------
Leaving a comment via this Blog is always appreciated. However, if you prefer to ask a question or make a comment via a personal E-mail, then you may contact me at: randonneur8 at yahoo dot com.
Posted by 1HappyHiker at 4:30 PM

John, Steve had been telling me about this hike leading up to it and we just got off the phone where he told me about your adventures yesterday. Fantastic. Great company, great views, and putting your feet in new places here in the Whites all add up to a great day.

Your last sentence sums it up wonderfully, i.e. “Great company, great views, and putting your feet in new places here in the Whites all add up to a great day.”

John,
This looks like a great hike. I love how you point out the ledges from another view, so we can see where you were. You're right, wonderful views. I'm excited to hear about the porcelain signs. If they date back to when license plates were porcelain, they would be from the teens or early 20's. Very, very cool pieces of history. Were they on the current trail or did you find them on your bushwhack?

Karl, thank you for your very kind comments!

Regarding your question about the old trail signs, we saw them on the current trail, NOT on our bushwhack. As I presently understand it, about the only place where one can still find a few of these old porcelain signs is along the more remote trails surrounding the Evans Notch area in Maine. But, Steve might uncover some other interesting information about these old signs when preparing his Blog report for publication sometime over the next several days.

Hey John, those are some neat old signs! Looks like a great hike - love those cliff shots! Glad to see no snow in any of your photos, too!

[NeoAkela] Chris, as always, it was interesting to hike along trails that were new to me.
Regarding snow, we did encounter a few very small patches that were still lingering here and there. But all were easily traversed and barely required breaking stride.
Yup, those old porcelain signs were pretty neat! I know that you have quite a collection of vintage photos. Don’t suppose your collection might include snapshots that show some of those signs when they were in their “youth”?!

Another great hike! Open ledges with big views are my favorite. Great pictures, and also looking forward to hearing some history on those old signs.

Owen . . . thanks for your comments! You and I are in agreement about open ledges with big views! That type of view also ranks very high on my list, plus I like mountain vistas with water (lakes, ponds, rivers, etc) in the foreground.

Probably more history will be forthcoming on those old trail signs. But in the meantime, I’ve learned that the signs were made of steel and coated with enamel paint, and possibly were still being placed on certain trails up until the early 1950s.

Does anybody know of a good overnight loop in this area? I mean in the region east of Caribou-Speckled Mountain Wilderness, but south of route 2.

Simon, sorry I can’t be of much help to you regarding an overnight loop south of Route 2 in the region EAST of the Caribou-Speckled Mtn Wilderness. I don’t hike in that area on a regular basis, plus I’m strictly a day-hiker.

Thanks! I'll have to do some more research...