A Couple of Vermont Gems: Mt. Pisgah and Lake Willoughby

It's just a matter of mind-set, but each time I consider hiking across the New Hampshire border to either Vermont or Maine, the idea of long-distance travel pops into my head. And each time, I need to remind myself that the travel time and distance is often no further than many of the hiking locations that I visit within New Hampshire!

This past Sunday (08-May), I drove less than an hour from my home in New Hampshire to do a hike in Vermont. The specific location was the Mt. Pisgah/Lake Willoughby area which is located along Rt 5A near Westmore, VT, and it lies within a region known as the Northeast Kingdom.

There is an interesting bit of history associated with Lake Willoughby relative to the French & Indian War (1754-1763). In 1759, Robert Rogers led his Rangers on a successful raid of the Abenaki Indian settlement of St. Francis in Quebec, Canada. This raid was in retaliation for the Abenaki attack on a retreating British unit while under a flag of truce. After the raid, Rogers and his men were pursued through northern Vermont by French and Indian forces as they made their way back to base. As part of their escape route, the men hugged the rough and rocky eastern shoreline of Lake Willoughby.

Lake Willoughby is a glacial lake reaching a depth of over 300 ft. in places. Because of how it is dramatically situated between the steep cliffs of Mt. Pisgah and Mt. Hor, it has a close resemblance to a Norwegian fjord.

As you are approaching the Lake Willoughby area while driving north on Route 5A, the surrealistic image of Mt. Pisgah and Mt. Hor suddenly comes into view (photo below). 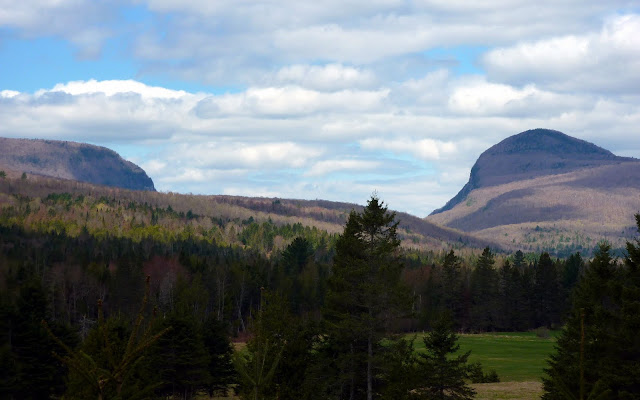 Before I started my hike up to Mt. Pisgah, I did a short little "hike-ette" to the south end of Lake Willoughby. It might just be me, but I think this lake has an awesome beauty!
Looking northward from south end of the lake 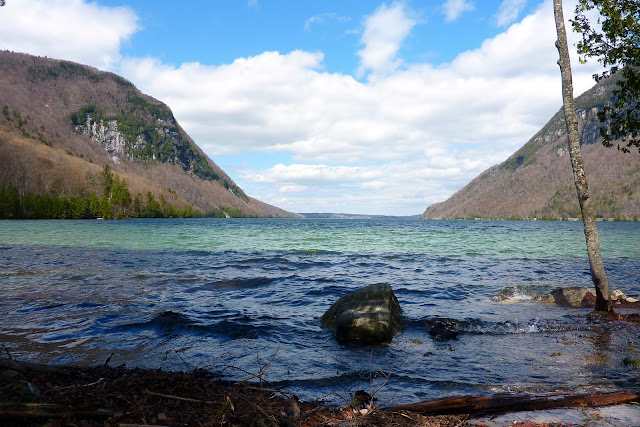 Eastern shore (Mt. Pisgah side of the lake) 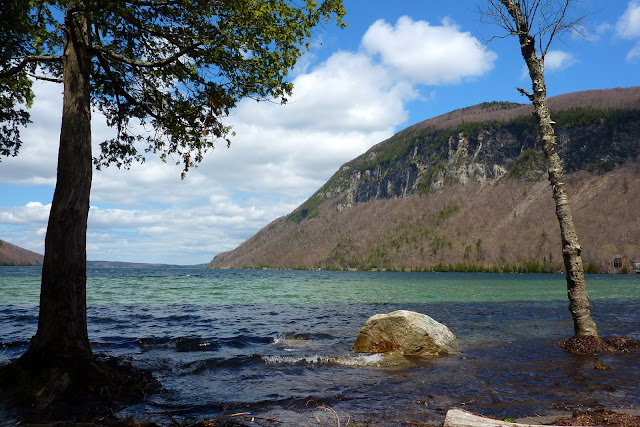 Western shore (Mt. Hor side of the lake) 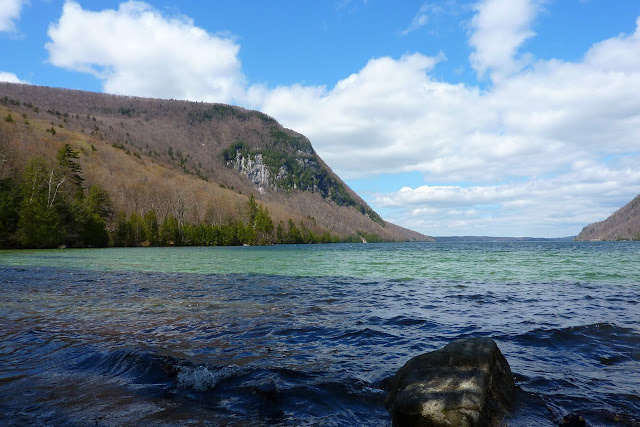 After my brief visit to the shoreline of Lake Willoughby, I began my hike to Mt. Pisgah via the South Trail.
Spring wildflowers were abundant all along this trail. Below is a collage of various flowers that were seen. 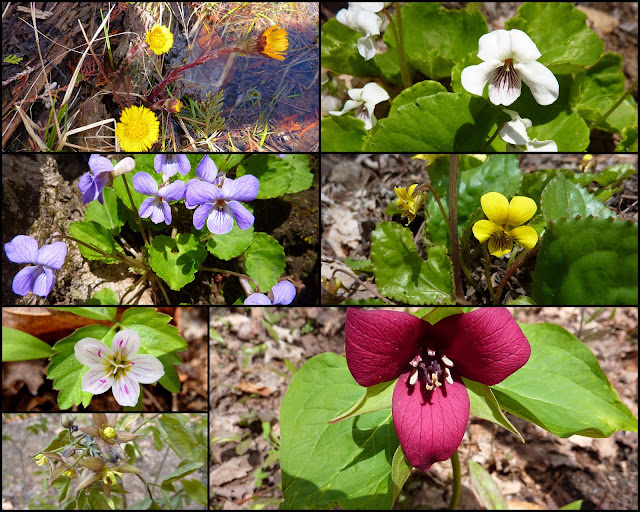 And shown below is a collection of violets that I thought was especially nice. 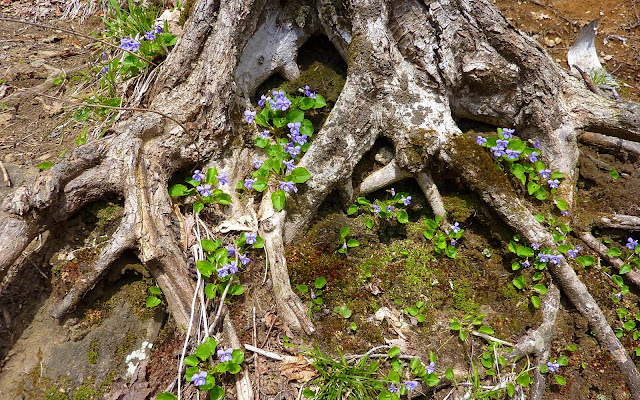 Like many trails, the South Trail has some wet & muddy spots here and there, but overall the treadway is in good shape. Large portions of the trail resemble what is shown in the snapshot below. 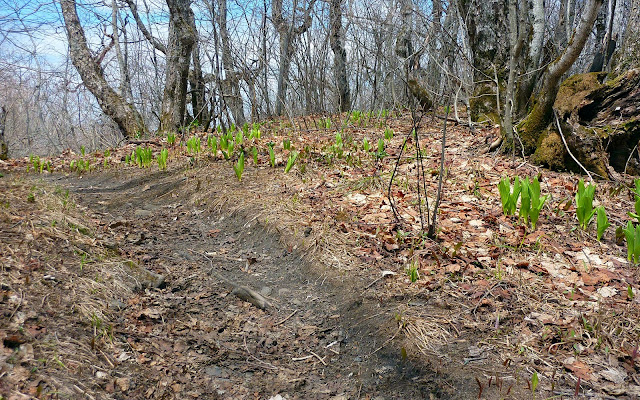 Throughout the entire course of my trek, I only hit one very small patch of snow which was located just a short distance from the summit of Mt. Pisgah. 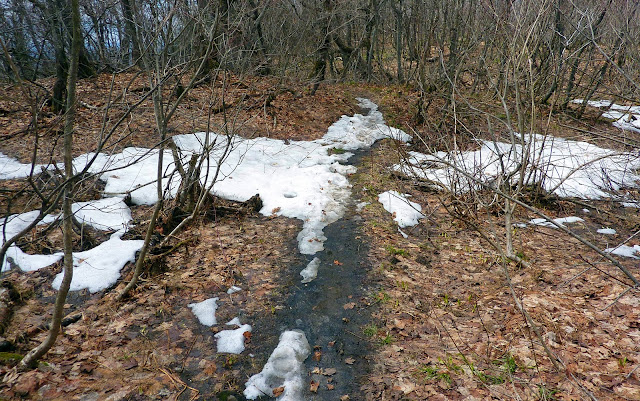 As you ascend Mt. Pisgah, there are many tantalizing views of Lake Willoughby as seen through the trees off to your left. There is one spot along the way known as Pulpit Rock where you can very gingerly step out onto a very small perch to get a view that's unobstructed by trees (photo below). 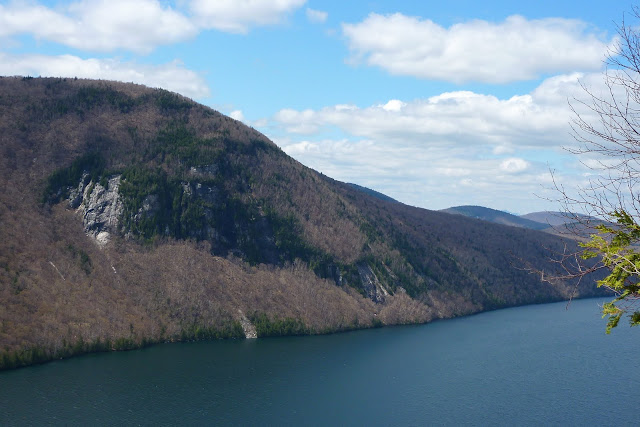 Much better views of the lake and the surrounding area await you from viewpoints that are located just beyond the summit of Mt. Pisgah. However, you need to appreciate that all the above views are from ledges located on the steep rocky cliffs of Mt. Pisgah. The photo shown BELOW doesn't do complete justice to the rather precarious drop-offs at each of the viewpoint locations. 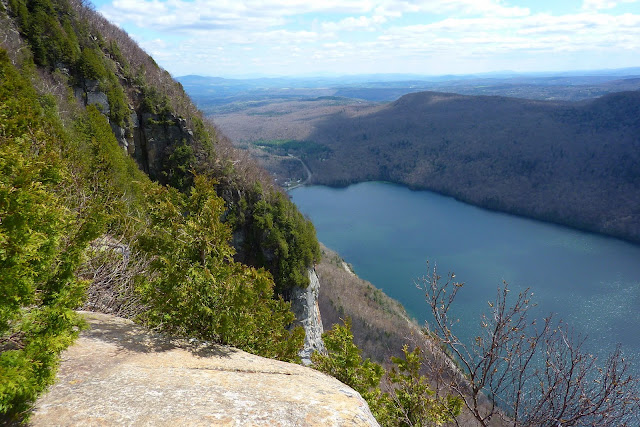 Although the drop-offs at these viewpoints might prove a bit unsettling to some folks, they do provide dramatic vistas as shown in the photos below.

Mt. Hor (the peak seen above and to the left of the cliffs) 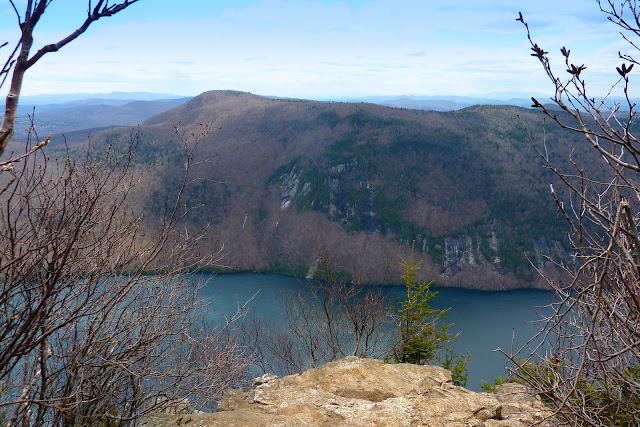 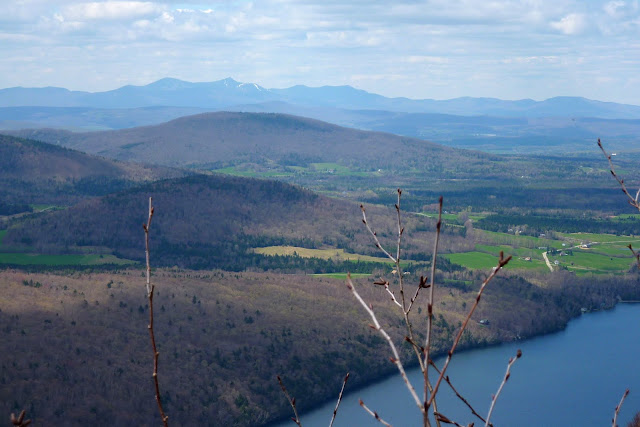 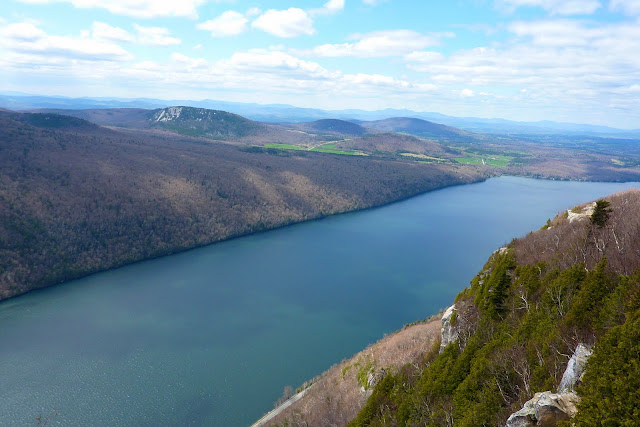 Way off in the distance from these ledgy viewpoints (particularly the North Outlook), you can see peaks in the Franconia Range, the Kinsmans and Mt. Moosilauke across the border in New Hampshire.  Below is an extreme zoom-shot showing Cannon Mtn, the Cannon Balls, and Kinsmans. 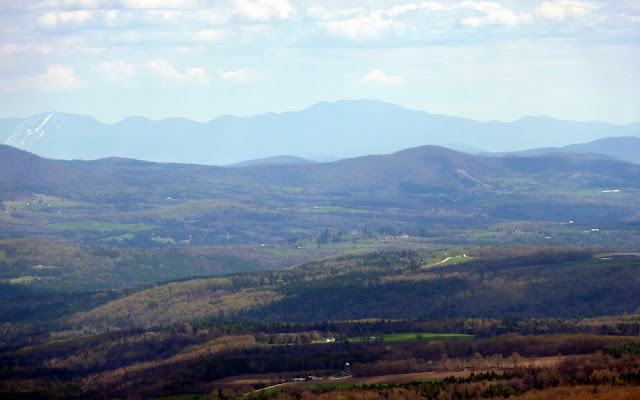 In addition to the viewpoints on the lake side of Mt. Pisgah, there is another fantastic viewpoint on the other side of the mountain just a few hundred yards from Mt. Pisgah's summit. This vista provides a broad view down the West Branch of the Pamsumpsic River Valley. Burke Mountain dominates the landscape and is easily recognizable by its many ski slopes. Some photos taken from this ledge are shown below.

Barely visible on the hazy horizon to the right of Burke Mtn are peaks in the Franconia Range and the Kinsmans over in NH. 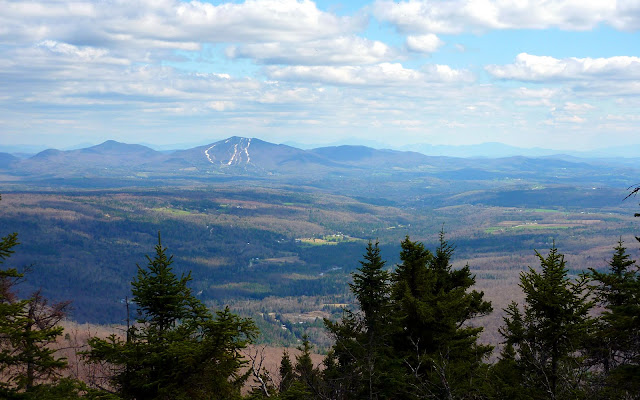 And, barely visible on the hazy horizon to the left of Burke Mtn are peaks in the Presidential Range in NH. 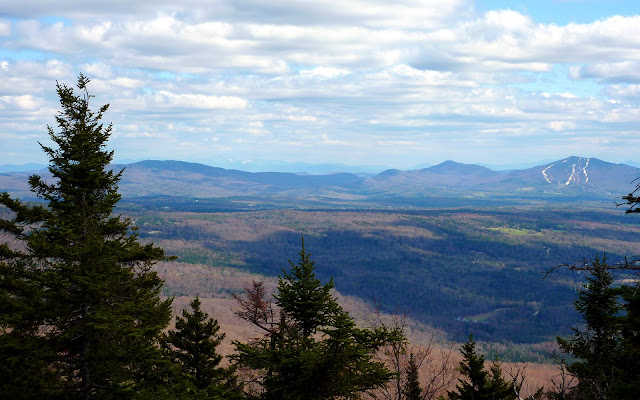 If you ascend and descend Mt. Pisgah (2,751 ft) via the South Trail, as I did, then a hike to the top of the mountain (plus a visit to the various overlooks beyond the summit) involves a round-trip journey of about 4 miles. There is a modest elevation gain of about 1450 ft.

Besides the area around Lake Willoughby, there are numerous other excellent hiking opportunities in the Northeast Kingdom of Vermont. The NorthWoods Stewardship Center (in partnership with the Green Mountain Club of VT) has produced an outstanding book in 2010 entitled "Northeast Kingdom Mountain Trail Guide" by Luke O'Brien. Over the upcoming months, I hope to check out some other hiking destinations just across the border in the very nearby State of Vermont!

Beautiful pictures. Trailwork is in full swing for me already. Hope all is well.

I applaud you for being out there already doing trailwork. I have yet to begin servicing my adopted trails. Most of them are located such that there is still some lingering snow, and so that's my "excuse" for not having started as yet. However, I fully expect to be out there working them within the next week. :)

Beautiful, John! I still haven't ventured into Vermont hiking... must be a mental block or something. Your photos are inspiring - what a lovely place!

Chris, thanks for taking a moment to post comments . . . much appreciated!

I know exactly what you mean about the “mental block” thing in regard to hiking outside the White Mountain region. Each time I venture forth to hike in VT or ME, it always turns out to be an enjoyable experience. BUT each time I embark on one of those expeditions, I have to overcome the mental hurdle of “distant travel”, which of course isn’t any more distant than many of the White Mountain locations that I frequently visit.

Nice pics John (as usual)! And thanks for adding the historical element as well. Roger's St Francis Raid was a culmination of many factors. Amherst was upset that several envoys of his had been earlier restrained by F & I forces under the flag of truce as they attempted to form a seperate peace with the Mission Tribes. Many feel that these envoys were actually acting in a more clandestine manner, thus their seizure. But for the most part, the St Francis Mission, among others, had been disgorging war parties on the New England frontier for many moons and prior earlier colonial wars, nothing would be better to the Colonials then destroying it.

In the end, the Raid certainly had its effect, but Wolfe, unbeknownst to Rogers, had conquered Quebec.

History can only add to the beauty of the area as you have displayed! Great job!

That is a neat little hike! The view from the "other side" of Cannon/Cannonballs/Kinsman is one we rarely see here in NH.

[Fisher Cat]: Scott, it was my pleasure to add a bit of history to my narrative about not only this hike, but any other hike where I can possibly work in a historical slant. As you so aptly put it in your comments “History can only add to the beauty of the area . . .”

[Summerset] I agree with your comment that it was “a neat little hike!” It’s just my opinion, but to me it’s sort of a Goldilocks hike, i.e. not too short and not too long, it’s “just right”! Also, I’m a big fan of doing something different and viewing things from different perspectives, and this hike seemed to fill that bill as well.

Outstanding report, John! Fine flower shots, too. I did that hike back in the mid-80s, this will provide inspiration to return. That area was Mike D's stomping ground for years, and a few years ago he showed me Wheeler Mountain - another great little hike in the Kingdom.

Thanks Steve! I'm happy to learn that you have experienced the pleasure of hiking in the "Kingdom". You mentioned Wheeler Mountain in your comments. That ledgy little mountain is on my "short list" of VT hikes to do sometime this year!