This past Sunday (01-May-2011) was a beautiful day in early spring. To fully enjoy the blue-sky weather, I wanted to do a hike that would provide some nice views. However, I also wanted a destination where I could avoid the hassle of carrying snowshoes, microspikes, or any other winter traction devices. After considering several options that met my criteria, I decided to drive northward about 45 minutes from my home in Bethlehem to the outskirts of the quaint little village of Stark, NH.

Before getting into the details of my hike, a brief history and a few photos of the Stark area might be of interest to a few readers. This town has a current population of just under 500 people. It was chartered in 1774 as Percy. In 1832 the name was changed to Stark in honor of General John Stark, hero of Bunker Hill and the Battle of Bennington. New Hampshire owes its motto, "Live Free or Die", to General Stark, who wrote those words in July 1809, in commemoration of the Battle of Bennington.

Also, Stark was the site of a German prisoner of war camp during World War II. There is a truly fascinating book about this which is entitled "Stark Decency: German Prisoners of War in a New England Village" by Allen V. Koop. Below is a photo of the highway marker at the location of this POW camp. 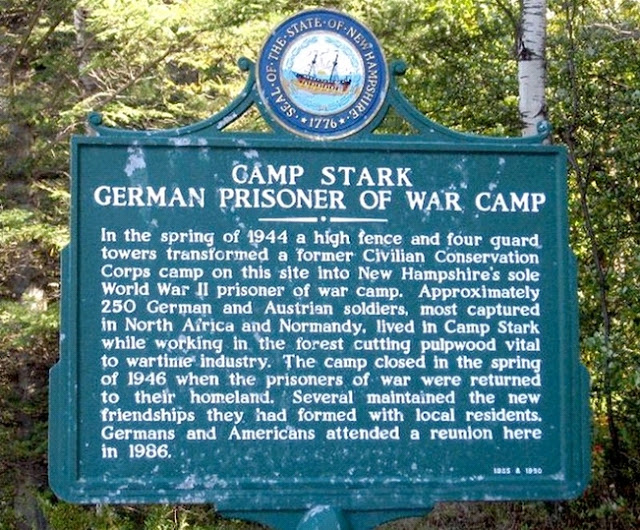 Shown below are two more photos related to Stark that I took in August 2010.

The first photo below shows the covered bridge in Stark that spans the Upper Ammonoosuc River. It was built in 1862. Also shown in this photo is a huge cliff which is known as Devil's Slide. 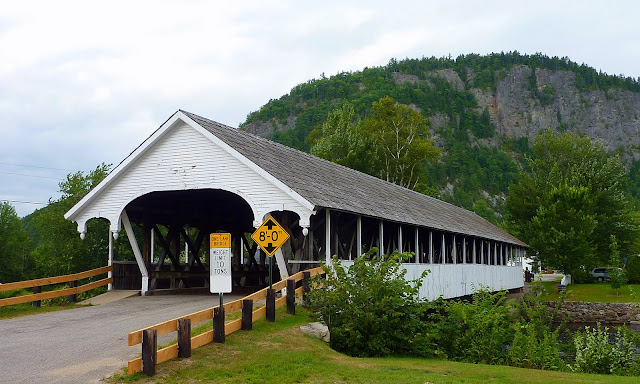 This next photo was taken when I hiked to the top of Devil's slide, and it provides a bird's eye view of the center of Stark. 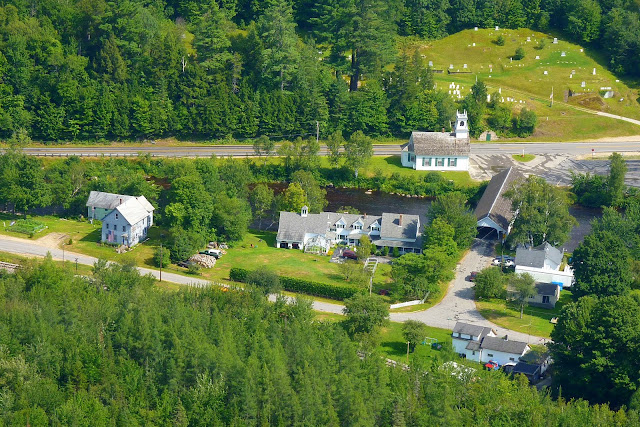 Although there's much more that can be said about Stark, I'll let that be it. So, the remainder of this report will be devoted to the hike that I did to Bald Mountain (2,378 ft elevation) which is located just a short distance north of Stark. I chose this location because of the pleasant views, and the low likelihood of needing winter traction devices since it's a low altitude hike, and large portions of the Bald Mountain Trail are generally south-facing.

Shown below is a map of the area where I hiked. As can be seen, the Bald Mountain Trail leads you to the foot of the mountain, but doesn't actually go to the top. You're left on your own to find your own way if you want to enjoy the fine views from this ledgy little peak! (Click on the map to slightly enlarge it.) 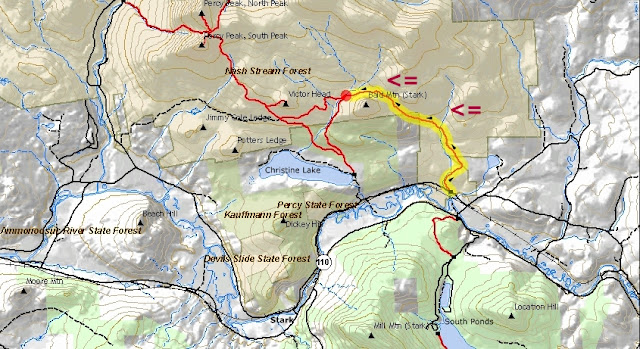 The Bald Mountain Trail is only 2.8 miles in length. However, I extended this hike by doing three forays off the trail. One of these sorties was to the top of Bald Mountain. The two red arrows on the above map show the general locations for my other two off-trail adventures. One involved a bushwhack to a small ledge located NE of Bald Mountain, and the other was a trek along an unnamed brook that heads northward from the trail about midway between the trailhead and Bald Mountain.

The ledges atop Bald Mountain are extensive. Shown in the photo below is one of the ledges. 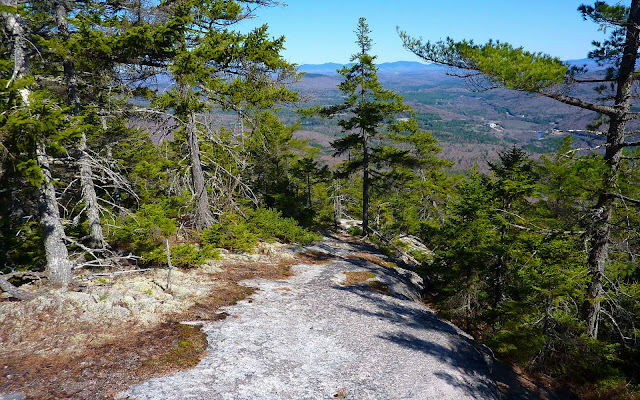 The hike to the top of Bald Mountain provided the "peeks of Percy Peaks" that was mentioned in the title of this report. For anyone interested in the geology of these distinctive gum-drop shaped mountains, click HERE for a report contained in Alex MacPhail's excellent blog entitled "White Mountain Sojourn".

Shown below is a snapshot of these picturesque peaks. 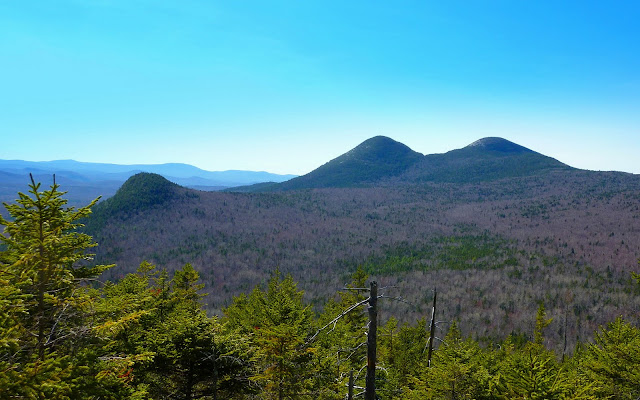 In addition to the Percy Peaks view, there are other vistas to be seen from Bald Mountain. There is a sweeping eastward view of the Mahoosuc Range of mountains over in Maine. 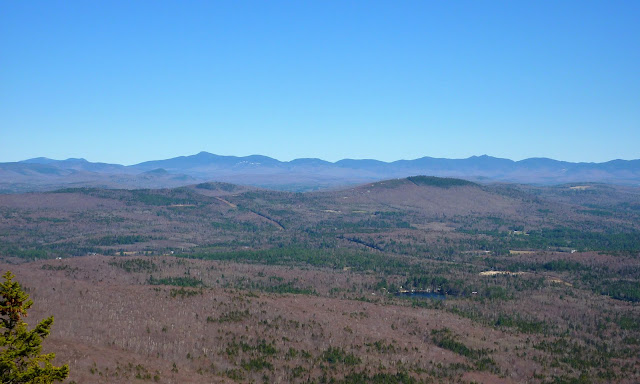 There is also a nice view to the south and also a bit to the west where you can spot peaks in the Presidential Range and the Pilot Range. 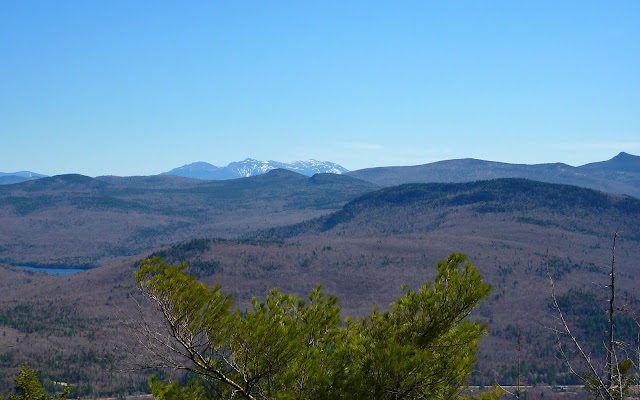 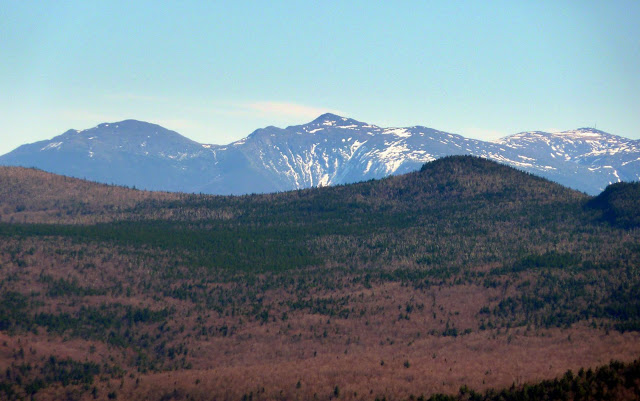 My last stop of the day was at a small cascade located on the unnamed brook that I mentioned earlier in this report. It was getting late in the day and so I only had time to go a few tenths of a mile up this brook. From looking at a topo map, I suspect that there are many other cascades higher up on this brook. Chances are that I might be going back to that area to check it out!  Below is a photo of the one small cascade that I encountered on this short off-trail trek. 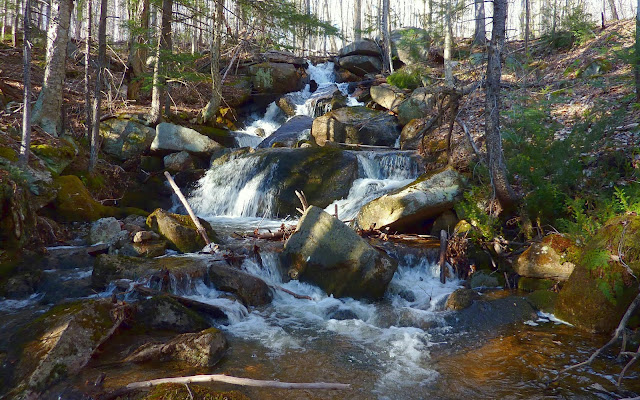 Regarding the Bald Mountain Trail itself, I was impressed! Since it was the first time I'd ever hiked along this trail, I had no idea what to expect. The grade is very gentle, the trail is well-blazed and well-maintained, and it leads you through a beautiful hardwood forest, some of which is birch. In my opinion, it does not detract from the trail, but it should be stated that the lower portion of the trail doubles as a snowmobile trail. 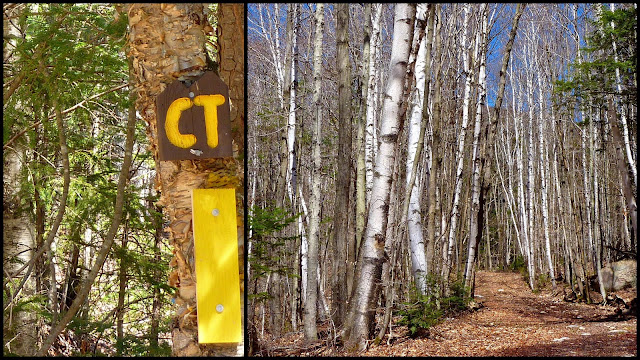 Oh! I should also mention that I did indeed have no need for snowshoes, microspikes, etc during this trek. However, there were a few easily avoidable patches of snow along the way. There was even enough to make a small snowman! :) 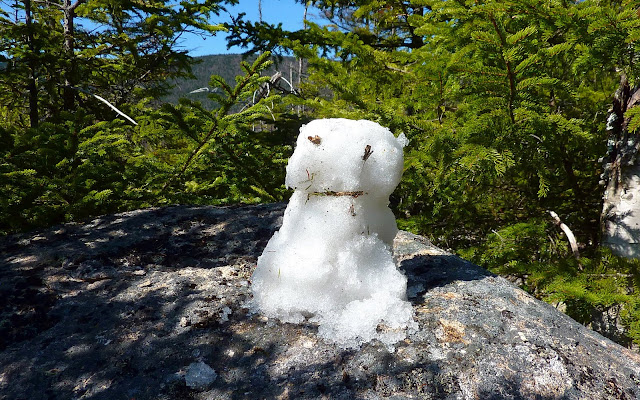 There is just one last note of interest. Near the upper end of the trail, there was a sign on one of the trees that read "Steve's Tree 1992", as shown in the snapshot below. There must be an interesting story behind this! 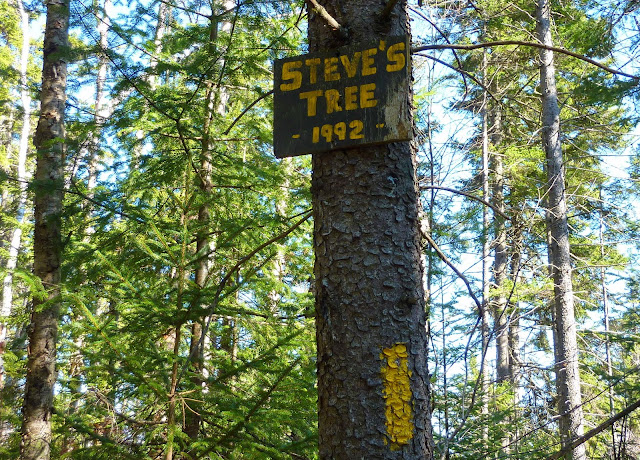 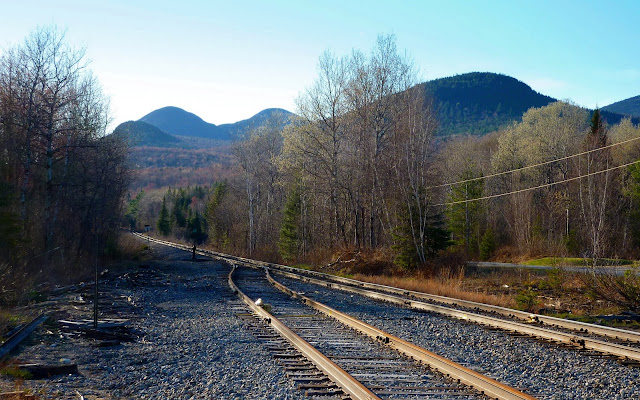 ------------------
Leaving a comment via this Blog is always appreciated. However, if you prefer to ask a question or make a comment via a personal E-mail, then you may contact me at: randonneur8 at yahoo dot com.
Posted by 1HappyHiker at 5:52 PM

Hi Grant . . . you’re so right about NH being an intriguing place. Although I had visited NH on vacations, I only relocated here about 7 years ago. The longer I live here, the more intriguing this place becomes!! I also find the neighboring States of VT and ME to be intriguing places.

John - This is another awesome hike. I love the views you obtained from heading off the trail. I'm amazed there is no "real" trail to a ledge with such spectacular views. I always enjoy seeing the Prezi's from a northward view since I've never been that far north.

The brook also looks great. Again, such a beautiful cascade, hidden with no real trails around it. I'm glad you took some shots and brought it to us.

Finally, I'm fascinated at the history of this small town. I had no idea we had a WWII POW camp in this great State, in such a small town too. I'm sure a lot of people during the war didn't know it either. I know they kept some prisoners down at Camp Devens in Mass, but I thought that was in New England. I'm a history buff, so I'll be checking out that book by Koop.

Karl, your comments are much appreciated!

Regarding the WWII POW camp, I think you’re probably correct that not many people in the U.S. in general knew about this camp. However, as you will read in Allen Koop’s book, this POW compound was well-known by the people in Stark. Friendships with the POWs eventually began to blossom, and as the author states in the Introduction to his book, Camp Stark became “. . . an island of decency in a world at war”.

The POWs were assigned the task of cutting trees in the surrounding forestland to help the local paper mills meet their wartime production goals. I suppose it’s entirely possible that the POWs worked in some of the very same areas where I hiked this past Sunday!

Nice to read about the interest in Stark's POW camp. My grandfather was a guard at the prison and supervised a logging crew made up of prisoners. I've always been fascinated by this little piece of NH history.

[Anonymous]: Thank you for taking time to respond. It's terrific to hear from someone who has a family connection to Camp Stark.

Percy Peaks were on my list for a spring skiing destination, but I didn't seem to find the time. I suppose I have the GPS waypoints all set up for a summer trip though. Thanks for the interesting report and photos!

[Randonee Andy]: Hope you have a great hike to one or both Percy Peaks this summer. If you’ve never hiked the Percys before, you’re in for a treat! They are unique peaks. I don’t know how much (if any) lingering snow there might be on the trails leading to the Percys, but there was absolutely no snow or ice showing on their peaks as I viewed them from Bald Mountain.

Very nice photography on this post. I've hiked this route many times and bushwhacked up Bald Mt. too. Great little peak, certainly. You can actually make a loop around the mountain and drop down to the east shore of Christine Lake with its fine view to the west and northwest. Trek Percy Road back to your car and you won't repeat a step along the way.

[K.r. Nilsen] Thank you for your terrific comments!

It wasn’t until I got back home and started to reminisce about my hike that I realized . . . hey, I could’ve done a loop! The loop I’d thought about was about the same as you suggested, EXCEPT I was thinking about using the westbound Snowmobile Rt 117 for my return, rather than using Percy Road. I thought this might be more of a “woodsy” experience than a roadwalk, but perhaps the snowmobile route becomes too overgrown with vegetation for comfortable trekking during warm-weather months??

Yes, you can use Route 117 (snowmo). This time of year you won't have the fantastic weed jungle to contend with. Only thing is you miss Christine Lake. But you could drop down to the lake and pop back up and scoot 117 back toward your car.

Thanks for that follow-up info! Much appreciated!