The trek to Black Mountain was my backup ("Plan B") after completing a trek earlier in the day to Hall's Ledge (click HERE for my Blog report for that trek).

My original plan for this past Sunday (03-April-2011) was to do a quick trek up to Hall's Ledge from the trailhead on Rt. 16, and then do a bushwhack in the vicinity of the Carter Notch Road. However, on my descent from Hall's Ledge, I decided to scrap my bushwhack plans since the snowpack was beginning to soften considerably in the short time-span between my ascent and descent from Hall's Ledge. My "Plan B" was to hike up the Black Mountain Ski Trail to the Black Mountain Cabin and then onward to the 2,757 ft knob at the south end of Black Mountain.

Although it's about a 1,450 ft elevation gain from the parking area on Melloon Road to the 2,757 ft knob on Black Mountain, it sure doesn't seem like a super-intense climb. Possibly this perception is due to it being such a wide trail that doubles as hiking trail and a XC-ski trail. Or possibly it's because the grade is relatively moderate for most of the 1.6 mile trek, although there are a few short pitches that have some steepness to them.

Regardless, on the day of my hike, the snow on the trail was soft, but didn't stick to my snowshoes. It took less than an hour to reach the Black Mountain Cabin.  As some might already know, you can make reservations to stay at this USFS cabin via the Internet (click HERE for details). 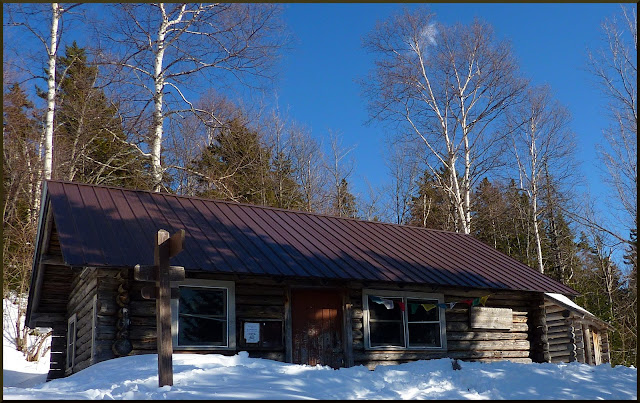 Whether you're staying overnight, or just visiting, you've got a nice view of the Presidentials from the cabin's doorstep!! 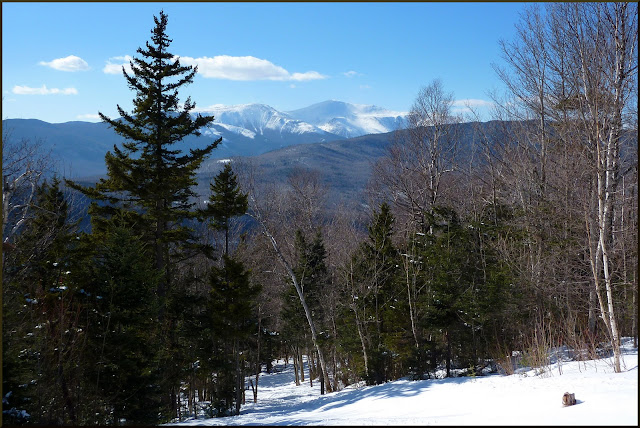 After my brief visit at the cabin, I continued onward for the additional 0.3 mile to the viewpoint at the 2,757 ft knob on Black Mountain's ridge. I really like the very up-close view of Carter Notch that's available from this spot. 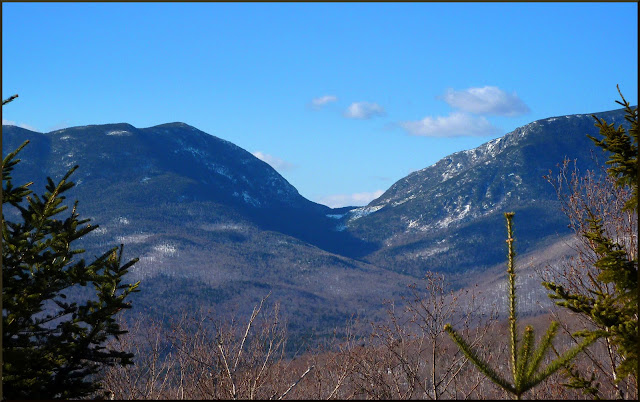 From this same spot, there is also a view toward the Presidential Range. 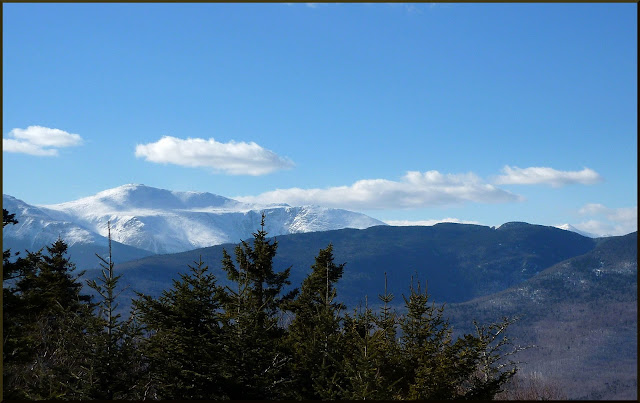 And, there is even a view toward the Baldfaces, although it's a bit obstructed by trees. 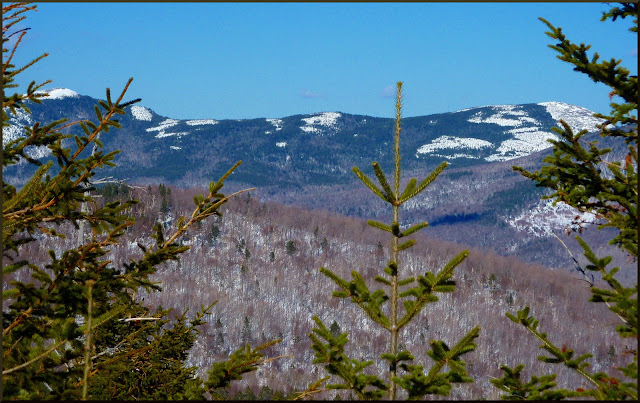 Adding Black Mountain to my trek to Hall's Ledge resulted in a combined elevation gain that is greater than for treks to many of the NH 4,000 footers!! But, so be it. Those two little destinations were what I opted to do on this particular day.

And, all things considered, I was sort of happy that things worked out such that I implemented my "plan B" for a hike to Black Mountain. It is a nice hike, BUT it's really too short for me to do as a "stand-alone". So, it was nice to be able to combine it with my hike to Hall's Ledge earlier in the day.
------------------
ADDENDUM: (Added 08-Apr-2011)
I am most grateful to David Govatski of Jefferson, NH for providing me with some photos of a tower that once stood on the 2,757 ft knob at the south end of Black Mountain. It's the spot where I took several of the snapshots for this Blog report. The tower stood from 1913 to 1947.

A couple of old photos are shown below. And they are followed by a brief chronological history of the tower as written by David Govatski. 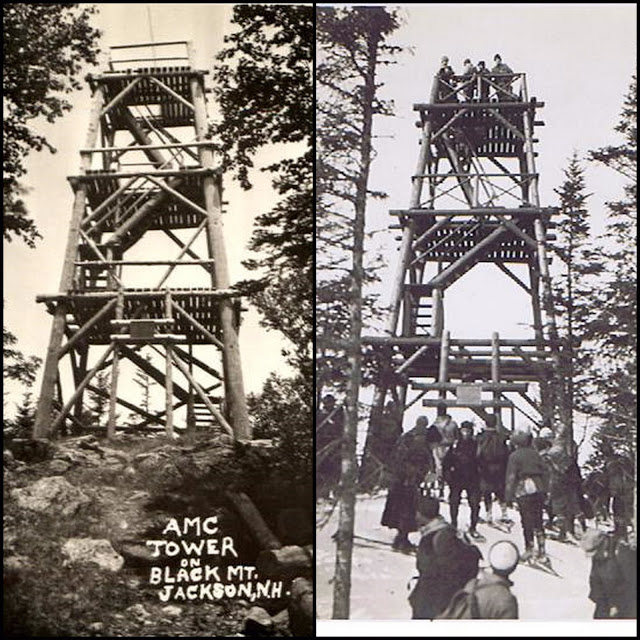 1. Appalachia magazine for October 1914 on page 197 states that “the number of Reservations has been increased this year by the conveyance to the club of 30 acres of land upon the middle summit of Black Mountain in Jackson, New Hampshire, to be known as the Walter R. Davis Memorial Reservation. An observation tower, forty feet high, has been erected, upon which a memorial tablet will be placed; and it is understood that some exercises, appropriate to the occasion, will take place upon the Reservation, during the February meeting of the Snow-Shoe Section.”

2. The late Walter R. Davis is mentioned on page 190 of the Appalachia magazine for October 1914. He was a member of the Excursion Committee and especially remembered as an officer of the Snow-Shoe section.

3. The June 1915 Appalachia on page 306 states that the club is considering “fencing the reservation to keep cattle from trespassing.”

4. The AMC Annual Report for 1924 reports that a February snowshoe trip found the railing on the upper observation platform to be in such poor condition that it would collapse upon leaning on it. This was repaired by James Garland of Intervale who reported that several timbers were rotten and replaced.

5. The AMC Annual Report for 1929 states that the tower was rebuilt in 1929 and the spring in the east pasture was cleared.

6. The AMC Annual Report for 1932 mentions several hundred people a year were using the tower.

7. Chairman W. Ballard of the Trustees of Real Estate said in the AMC Annual Report for 1932 that the club wishes to turn over several reservations including the Davis Tract to a public agency. (Depression related financial issues for the club can be read between the lines).

8. The 1934 AMC White Mountain Guide on page 234 describes the East Pasture Trail from Fernald’s to the “Observatory” as being 2 miles and taking 1 hour 30 minutes.

9. The AMC Annual Report for 1936 states that the club is in the process of turning over most of its reservations to public agencies.

12. The 1948 AMC White Mountain Guide on page 220 states that the “Davis Memorial Observatory formerly on one of the middle peaks (2,735 feet) and built by friends of Walter Rockwood Davis in 1913 was dismantled in 1947”.

13. A report titled “Club Properties – Past, Present & Tomorrow” by Fran Belcher of the AMC on 6 October 1977 states on page 5 that the Davis Reservation was acquired in 1913 on the summit of Black Mountain in the Town of Jackson and was 40 acres in size. (Item 1 above indicates it is 30 acres).

The story of the Walter Rockwood Davis Memorial Tower is a part of the rich history of the White Mountains. There is certainly more to be told beyond this brief chronology. The construction of the Black Mountain High Country Cabin by the WMNF also needs to be told.


ADDENDUM: (Added 04-Aug-2011)
On 31-July-2011, I did a trek to another peak located on Black Mountain.  Visiting this northernmost peak requires a bushwhack since there are no trails leading to it.  Please click HERE if you want to read my Blog report about that adventure.

Looks like a great plan B! Can anyone stay in the cabin? Looks like a nice little retreat spot!

Regarding your question about staying at the cabin, I just added a link to my Blog report. It provides information about making a reservation. Once you access the link, look for an icon on the right side of the page that says "Book Now".

John,
Due to your endless explorations,

"My cup runneth over" with hikes I must add to my bottomless list!

Marty . . . thanks for posting a comment. Guess it probably better that your cup runneth over, rather than runneth dry?!

This is a nice blog, with great pictures.

Ray, thanks for the compliment!

Your blog (http://takealonghike.wordpress.com/) is nice too! At least I think that is YOUR blog . . . right?