Sometimes I get a yearning to do a totally goofy bushwack to explore a small geographic feature that shows up on Google Earth. Yesterday (27-Mar-2011) was one of those days! I'd noticed that there was a "white strip" that shows up on Google Earth along an unnamed drainage to the east of the Dry River valley (located within the Presidential Range-Dry River Wilderness).  My "target-area" is circled in red on the image below, and is identified with a red arrow on the topo map. 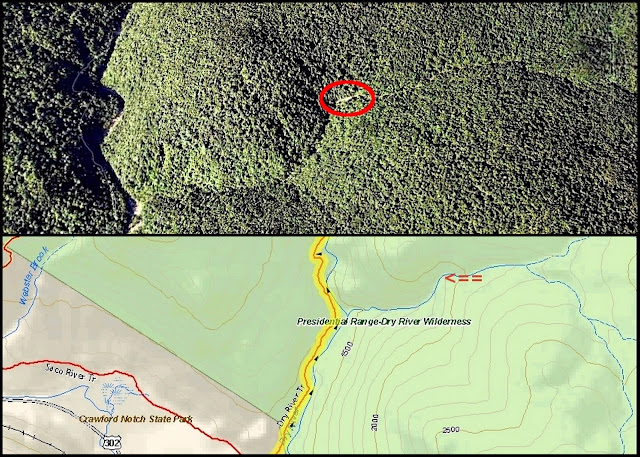 My game plan for reaching this "white strip" was to hike the Dry River Trail for 1.7 miles to the suspension bridge, then cross over the bridge and begin looking for a good spot to head off the trail in an easterly direction.

The Dry River Trail was well broken out by a combination of snowshoe and XC-ski traffic. It continued to be broken out (for some unknown distance) beyond the point where I left the trail. I always enjoy the hike up to the suspension bridge. The Dry River itself provides some eye-pleasing sights. On the day of my hike, the river was flowing rather slowly since it was sort of in a partially-frozen state. 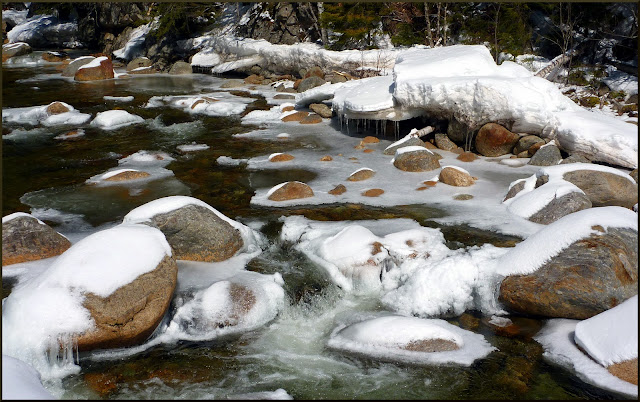 And although the Dry River is very attractive, there is a sight that is even more picturesque while en route to the suspension bridge. Of course, I'm referring to the spectacular view of Mts. Washington and Monroe perched on the headwall of Oakes Gulf. The two snapshots below show this impressive scene. (The second photo is obviously zoomed.) 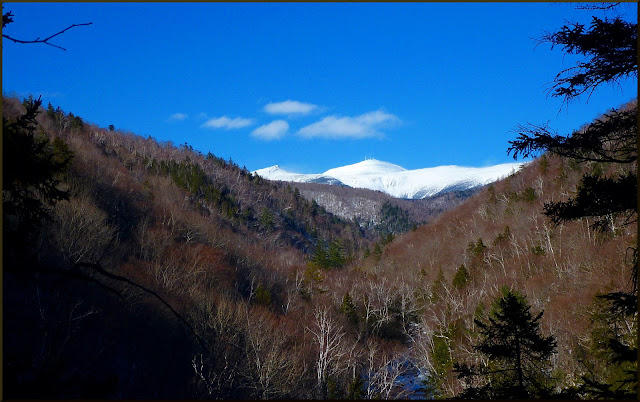 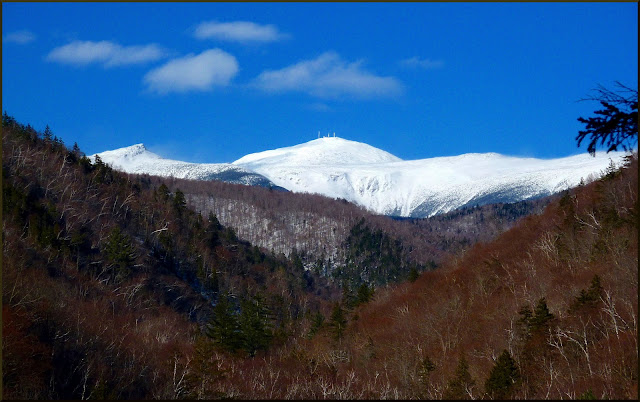 Most certainly, I'm not the first person to have made this discovery, but nonetheless, this was the first time for me! By going just slightly downstream from the suspension bridge, you can get a view of the bridge with Mt. Washington in the background. The snapshot below shows what I'm talking about. 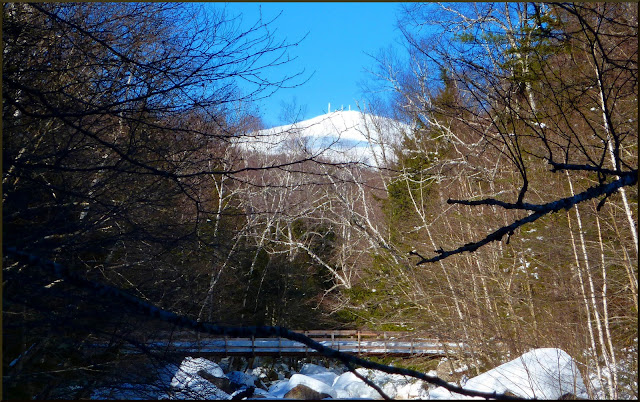 Crossing the suspension bridge was slightly complicated by a huge "monorail" on its decking. Considering the two handrails on either side, should this be considered as "the third rail"? If so, should you touch it?! :) 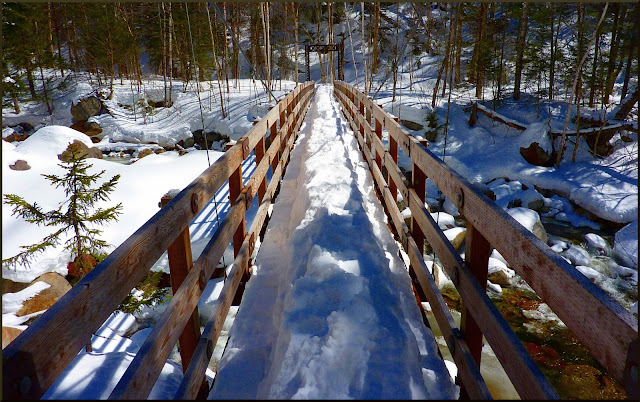 After crossing the bridge, I very quickly selected a point to leave the trail and launch my bushwack to investigate the "white strip" that I'd seen on Google Earth. The woods were wide-open and so there were very few bushes to whack! Early on into this trek, it became apparent that the journey into the wilderness though these gorgeous open-woods was a worthwhile adventure, even if the "white strip" turned out to be nothing noteworthy. The snapshot below shows a couple of typical scenes along the way. 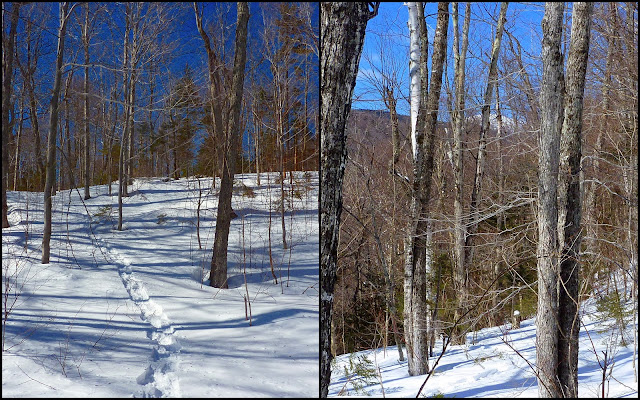 When I eventually arrived at the "white strip", it was less dramatic than I had hoped it might be. It consisted of an expansive snow-covered area on the SSE bank of the unnamed brook. To access this area, I crossed the brook on an ice/snow bridge.  During the warm-weather months, I have no idea if this wide-open area is a dry ledge, or possibly part of a cascade. Regardless, shown below is a snapshot taken while standing on the ledge/cascade. 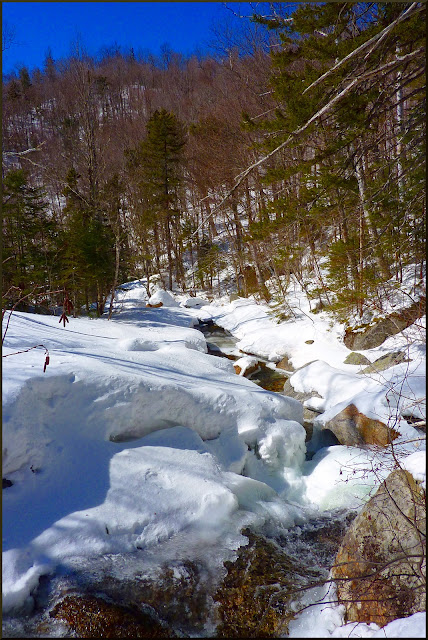 There were some attractive ice formations along this unnamed brook. The photo below shows one of them. 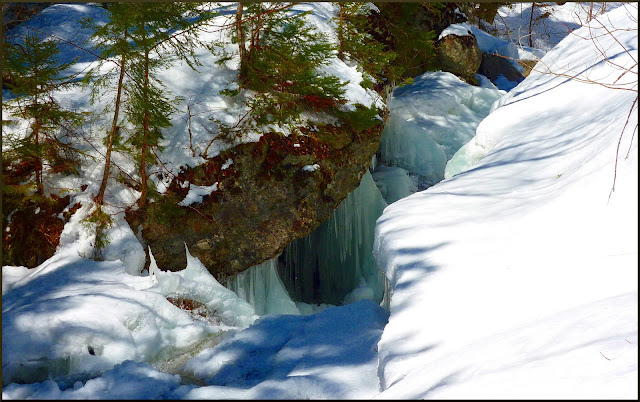 TO SUM IT UP: This was a very entertaining adventure. I always enjoy the picturesque hike along the Dry River Trail to the suspension bridge. And, although the mysterious "white strip" turned out to be less scenic that I'd hoped for, the trek over to it through the wilderness was great fun! As often happens, the journey provides as much joy as the destination.

A reader of this Blog sent me an E-mail asking for additional details about my route for the bushwhack portion of my trek. In case other readers might be interested in my response, it is summarized below.

I need to mention that the reader suggested a nickname of "White Spot Brook" for the nameless brook that I visited, and so that's how I'll refer to it!:)

Included in my response was the map shown below. The red line shows the route that I took. As can be seen, I crossed the suspension bridge and went just a short distance northward on the Dry River Trail, then soon left the trail and began bushwhacking in an ESE direction.

After I crossed the bridge, I could have bushwhacked southward along the east bank of the Dry River, and then worked my way up White Spot Brook. However, before embarking on this exploration, I had decided that I didn't want to fight my way up the steep & narrow corridor of White Spot Brook. I wanted to go directly for the "white spot" at the upper end of the brook to check it out first.

Once I arrived at the brook, I hit the "white spot" nearly dead-center. I then worked my way southward for about a tenth of a mile down the steep and narrow corridor of White Spot Brook. Since I wasn't finding anything of interest (no significant waterfalls or cascades), I turned around and headed back the same way that I came.
-------------------------------

Leaving a comment via this Blog is always appreciated. However, if you prefer to ask a question or make a comment via a personal E-mail, then you may contact me at: randonneur8 at yahoo dot com.
Posted by 1HappyHiker at 3:08 PM

Nice exploration, John - looks like you found some good hardwood whackin'! That "strip" looks like it could be a nice ledgy spot in summer. Bet it's been a while since anyone's been there! The Dry River valley sure is a unique and very interesting place.

That was an excellent report, John, and a worthwhile journey! It is so great that there are so many mysterious "geographic features" out there to explore. Sometimes they are not worth mentioning, other times they are amazing... but the journey is often more rewarding than the destination. Great to read your fine reports on the smaller ventures - who needs peak bagging when there is so much more? :)

Thanks guys for taking a moment to post a reply, and thanks especially for your positive feedback!

Hi John .... It looks to me like you may have found an interesting approach to get to Stairs Mt. The un-named brook has a unique drainage. The brook drainage fans out dramatically above 2200' elevation. It drains quite a large area. I expect during heavy rain events water comes roaring down that white strip and that is likely why it is white from having vegetation scoured off periodically.

Last summer I too explored up in Dry River Valley. I tried to replicate the trip you took to Mt Davis, but I approached via route that took us by the peculier bump in the topo lines further up the valley at 3000' elevation line. It shows up on most topo hiking maps. We missed it on the way up, but went right over it on the way down. I was expecting some big open ledge with awesome views, but turned out to be nothing special. We got skunked going up to top of the ridge too, but it was still a good day out. Spruce proved to be pretty thick near the top and we just ran out of time.

Funny you should make mention about going to Stairs using the "white strip" approach. When I was plotting out a route, I toyed with the idea of extending the whack by continuing eastward to link up with the Davis Path. But, after further consideration, I chose a less ambitious trek for this time around. :)

HOWEVER, if one were to extend the whack to intersect the Davis Path, then there would be the option of continuing north to Mt. Davis, or south to Stairs (as you suggest).