A Mystery in Crawford Notch, NH

In the mid-1870s the Portland and Ogdensburg (P&O) railroad completed the construction of its rail line through Crawford Notch area of New Hampshire.  Construction of the railroad was considered one of the engineering marvels of the time.  For much of the way, it was necessary to carve a shelf out of the mountainside to lay the track.  All work was done with hand tools and horse drawn carts.  Blasting the tons of rock was done using black powder.  Dynamite had been invented and patented in Sweden in 1867, but was not available in the U.S. until about 1885.

One of the more challenging spots was at the top of the Crawford Notch in an area known as the Gateway which required blasting away a portion of mountainside to lay the railroad tracks.  This section is sometimes referred to as the “Great Cut”.

And so, having put forward the tidbit of history in the above paragraphs, I present you with something that is a bit of a mystery.   A couple of interesting items were recently found when I was bushwhacking in an area above the railroad tracks on the un-blasted portion of mountainside west of the Gateway area of Crawford Notch.  One item was a wooden post with attached cabling, and the other was an old shovel blade about 300 ft from the post.

I have contacted local historians about my findings.  However, no one can arrive at a definitive conclusion about these artifacts.  It is generally agreed that, at some point in time, these artifacts had something to do with the construction, repair, or general maintenance of the railroad corridor.

One could be tempted to think that perhaps the artifacts are somehow associated with gin poles and lifting cables were used to remove the large chunks of rock that were blasted out when the Gateway was being constructed in the mid 1870s.  However, the post and cable that were found do not appear to be old enough to date back to that timeframe, especially since components of the post/cable artifact contains galvanized metal.  Galvanized metal did have some limited use during the 1870s.  However, galvanized steel wire for cabling was uncommon.  So it seems questionable that the post/cable artifact I found would date back to the late 1870s when the “Great Cut” was made.

It is also unlikely that the post and cabling that I found was associated with utility lines (i.e., telephone and telegraph) since all of the above-ground lines in the Gateway area have always ran on the opposite side (east side) of the railroad tracks, whereas the artifacts that I found are located on the west side of the tracks.

It might be possible that these artifacts were used in some type of cable-logging operation to remove large trees that had toppled and were hanging precipitously over the edge of the “Great Cut” (like maybe after the 1938 hurricane).  Or, perhaps the railroad company decided to proactively remove large trees on the mountainside directly above the tracks and then use a cable-logging technique to drag them uphill away from the edge of that precipitous embankment so as to prevent them from falling onto the railroad tracks below?

Below are several photos that illustrate some of the points mentioned above. 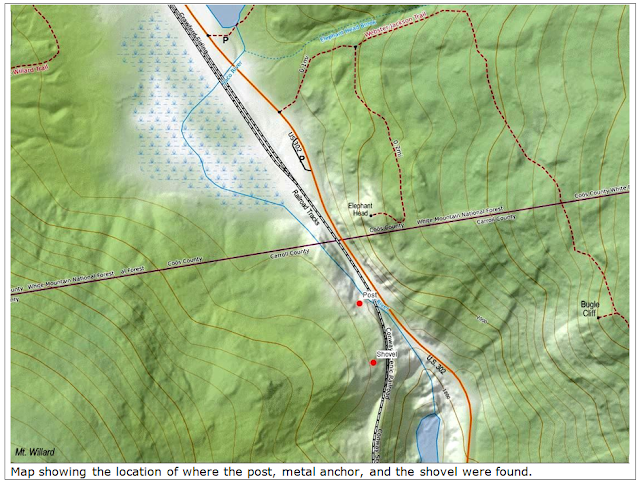 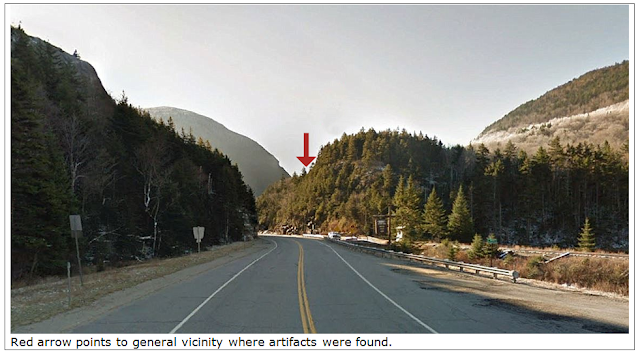 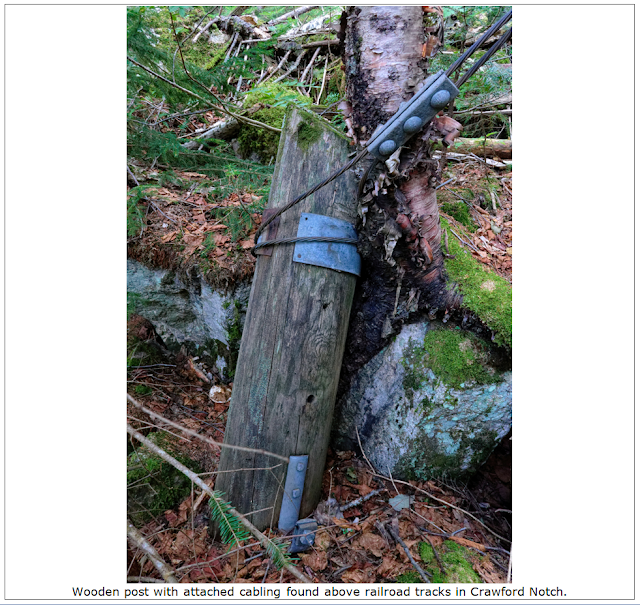 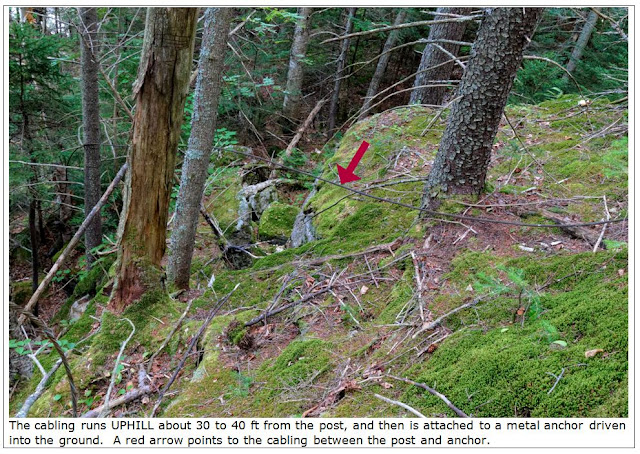 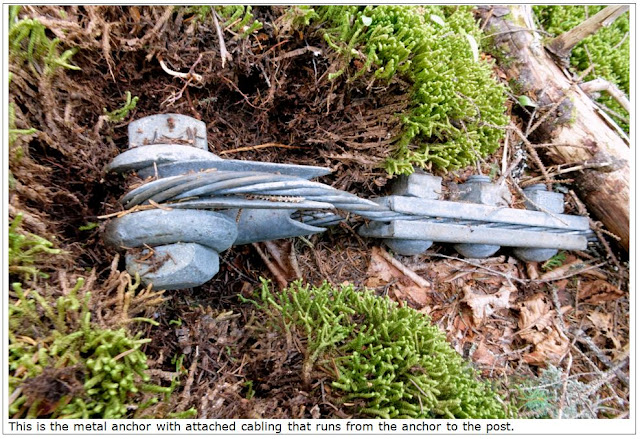 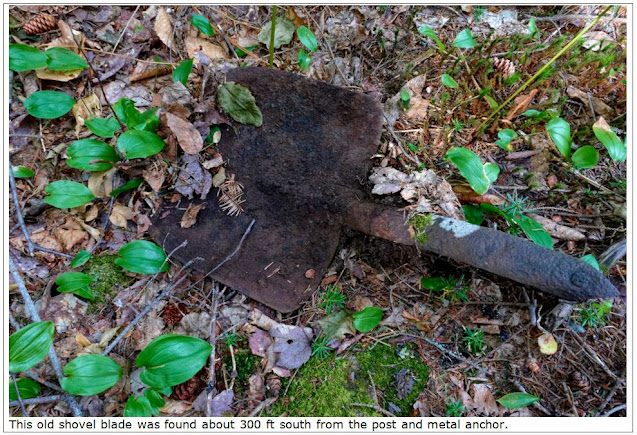 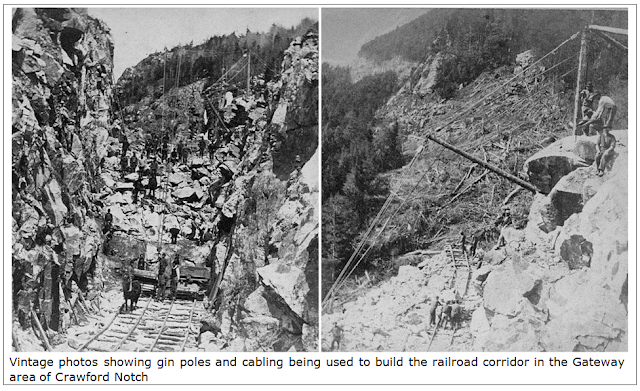 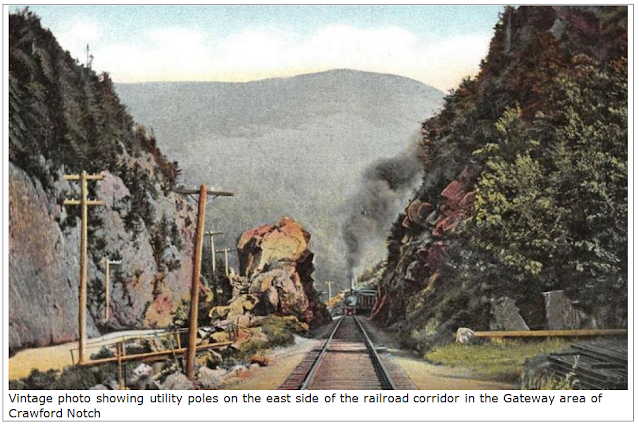 A separate blog posting or an addendum to this posting will be forthcoming if there should be a definitive answer to the mystery surrounding the artifacts that were found.

As always, comments can be posted directly to this blog, or an e-mail can be sent to: Randonneur8 at yahoo dot com.

I always love a good mystery! I agree with you that the metal anchor and cabling doesn't look old enough to date to the 1870s. The shovel looks pretty old though, maybe just a result of extensive rust? I also agree that a logging operation is the most likely scenario. Are there any old-timers in your area who would remember such a logging operation?

The last photo of the railroad corridor looks like it could have been made into a post card to advertise the Gateway.

If a definitive answer to your mystery is found, I'll be sure to read about it!

Regarding your question about contacting ‘old-timers’ in my area, I have contacted three such individuals. None were able to come up with a definitive answer as to the specific purpose the artifacts might have served. Although it is generally agreed that, at some point in time, these artifacts likely had something to do with the construction, repair, or general maintenance of the railroad corridor.

And yes, I agree that the last photo does indeed look like a promotional piece. Nonetheless, I opted to include it since it clearly shows the above-ground utility lines running along the EAST side of the railroad tracks, rather than the WEST side of the tracks where the artifacts were found.

Thanks again for reading and commenting on my blog postings!