A Short Trek to Cold Brook Fall in Randolph, NH

In early February 2019 I was in the vicinity of Randolph, NH, and just on a whim I decided to do a short hike.  I already had snowshoes in my car, and so why not!  My target was a waterfall known as Cold Brook Fall.  It is considered by many to be the most dramatic of the many waterfalls along Cold Brook which runs between the floor of King Ravine and the Randolph Valley.  This spot, with its large pool, makes a nice place for a picnic but not to swim, as the residents of Randolph use this as a source of their drinking water.

Cold Brook Fall can be reached from the Appalachia trailhead parking lot off U.S. 2 in Randolph, NH.    Just follow the Link trail for 0.7 mile to the Memorial Bridge.   Cross over the bridge and take the Amphibrach trail which diverges left from the Link, and then look for a path on the left which takes you directly to the waterfall. 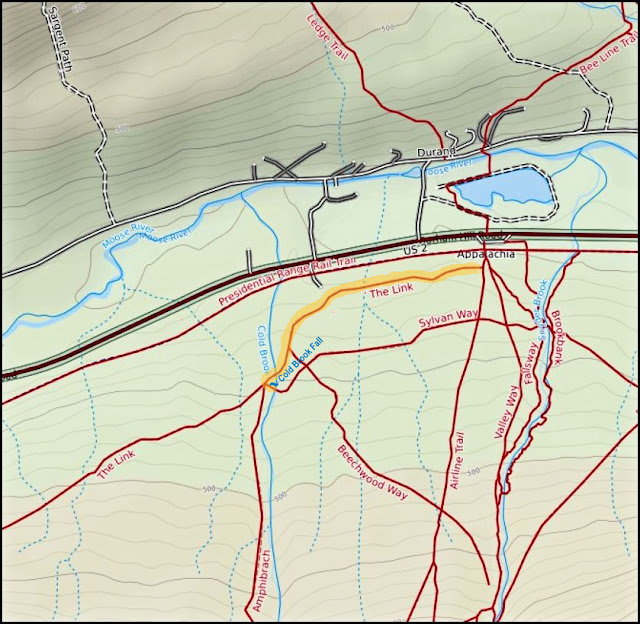 And regarding Cold Brook itself, it is so-named because the water is always very cold since it emanates from under the boulders high up on the floor of King Ravine where ice can be found year round.

In case you are wondering about the derivation of the unusually-named Amphibrach trail, it was designed by Eugene Cook and opened in 1883.  It takes its name from the blazing that was initially used, i.e. short, long, short, which is how Cook marked all his trails.

In some forms of poetry, an amphibrach is a stressed syllable surrounded by two unstressed syllables.  Some books by Dr. Seuss contain lines written in amphibrachs, such as these from “If I Ran the Circus”:
All ready / to put up / the tents for / my circus.
I think I / will call it / the Circus / McGurkus.

_ D) More About the Memorial Bridge:

And further regarding Memorial Bridge, it was officially dedicated on August 23, 1924.  It was designed and built by Louis F. Cutter and Eldredge H. Blood.

Louis F. Cutter created maps of the White Mountains from 1885 until his death in 1945.  He took barometric measurements to determine altitudes, and measured on-the-ground distances with an odometer he created from the front wheel of a bicycle.  Eldredge H. Blood was one of the founders of the Randolph Mountain Club (RMC).  The RMC maintains a network of over 100 miles of hiking trails in Randolph, NH, principally on the northern slopes of the Presidential Mountain Range, as well as trails on the nearby Crescent Mountain Range.

This little hike was very enjoyable.  Perhaps it serves as an example of when small, unplanned adventures can sometimes be as delightful as those that are more extensive and meticulously planned. :-)

One of the many beautiful waterfalls in that area. Cold Brook Falls looks quite impressive in the winter! Yet another great post John!

Thanks for reading my blog, Evan!

I learned a couple new things from reading this post. I didn't know about the difference between using "fall" or "falls" to describe a waterfall. And I didn't know about the amphibranch form of poetry, or that that form would ever be used to name a trail!
Also, I like the leaf "litter" coloring the trail. Very nice.
Looks like a fun snowshoe outing, John!

In writing this blog posting, I also learned something new, i.e. the origin/reason for the name given to the Amphibrach Trail back in the late 1800s. Being such an unusual name, I thought there just had to be some interesting information associated with it, and sure enough there is! It’s sometimes easy to forget that many of the early explorers were well-educated individuals.

And regarding waterfalls, the difference between “fall” and “falls” was familiar to me. In a way, it sort of makes sense for a waterfall having only one vertical drop to have a name such as Cold Brook Fall, rather than having the plural form of Cold Brook Falls. However, I’m of the opinion that it’s generally only purists who use the singular form (i.e. “fall” vs. “falls”) to name a waterfall having only one vertical drop. :-)