Wind-gusts of over 70 mph, combined with a heavy rainfall, caused a lot of damage throughout Northern New England at the end of October 2017 during what has been dubbed as the Halloween Storm.

The strong winds were simply too much for many trees to handle, and unfortunately the huge number of downed trees caused a lot of damage to hiking trails, roadways, homes, etc.  The damage to the power grid caused the fourth-largest power outage in New Hampshire history, leaving an estimated 450,000 without electricity at one point during the storm.

One of my adopted trails (Martha’s Mile) was among those trails that were particularly hard hit by this storm.  For over a decade, I’ve been able to remove downed trees and handle other maintenance responsibilities for this trail without any need for outside help.  However, this time was quite different!  The staggering number of huge trees that had fallen on Martha’s Mile was clearly more than I could handle with simple hand tools.  And so, I sent a request to the Forest Service to send a chainsaw crew to clear the trail.

Considering the enormous amount of work the Forest Service had to do in the aftermath of the Halloween Storm, I had no idea when a crew might be available to work on my trail.  I thought it might even be the Spring of 2018 before this work could be done.  However, I was delighted and thankful that a crew was dispatched about 3-weeks after submitting my request!  With a lot of time and effort, they were able to completely clear all the downed trees from the trail corridor.

Shown below are a few “before and after” photos that I took of the situation along Martha’s Mile.

Two days after the Halloween Storm, I hiked up to Martha’s Mile to assess the storm damage.  I was appalled by what I found!  Shown below are just three of the many photos I took. 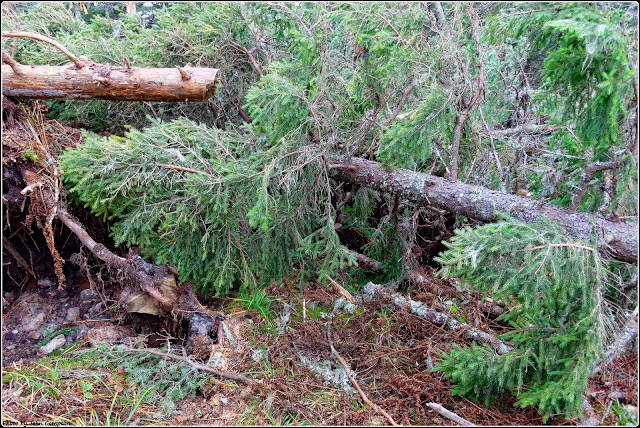 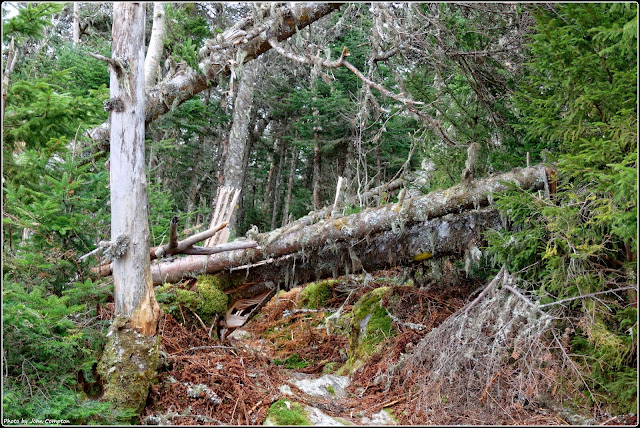 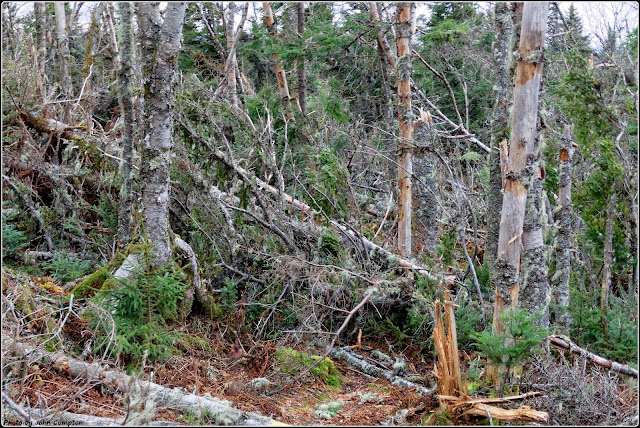 About 3-weeks after the storm, I once again hiked up to Martha’s Mile.  This time I wanted to get a firsthand look at the magnificent work the Forest Service had done to clear the trail of all the downed trees.  Shown below are just three of the many photos I took during that trip. 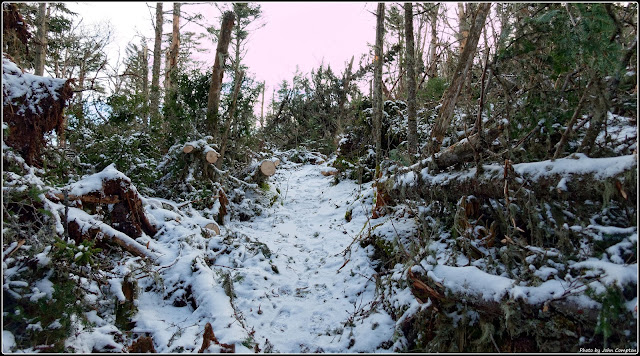 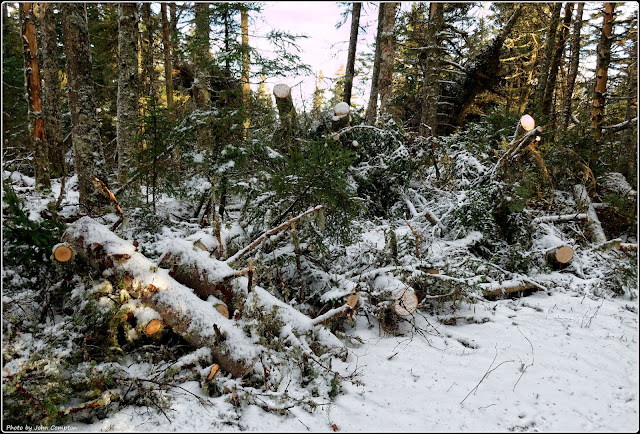 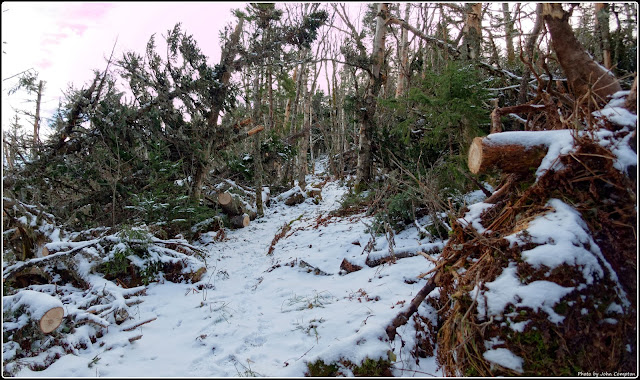 For those who might be unfamiliar with the location of Martha’s Mile, it is situated along the ridgeline of Cherry Mountain (near Jefferson, NH), and it connects two peaks on that mountain.  One peak is named Mt. Martha, and the other is named Owl’s Head.  Shown below is a map. 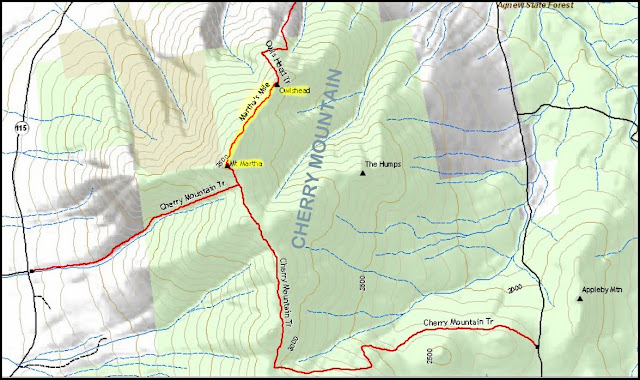 One of the many things I had to be thankful for during this Thanksgiving Season was the remarkable work done by the Forest Service in clearing all the downed trees from the Martha’s Mile trail.   My sincere “thank you” goes out to the crew of the Pemigewasset Ranger District of the U.S. Forest Service.
Posted by 1HappyHiker at 9:53 PM

I live in Carroll; and visit Mt Martha and Owlshead about twice a year, for Fall and Winter. The down-slope winds were rip-roaring all night at my house on the west side of Mt Martha, your photos show pretty much what I expected up there. In the future when I don't travel for work and retire I would like to take up some of the trail up-keep in that area. It's one of the best trails in the area. I thank the forest service for some how blitzing through that mess, and I thank you for the general upkeep of the trail over the years and the pictures and story. I hope those big birch trees in the col between Mt Martha and owls head are still standing.

Interesting post, John. I remember hearing a little bit about your Halloween storm, but didn't realize the extent of the damage. The "before-and-after" photos are remarkable.
I'm thankful for the work of the forest service, and for trail volunteers such as yourself! I'm also thankful that we still have beautiful places like this in which to recreate.

Greg, thank you for your comments!

You’ll be happy to know that I didn’t notice a huge amount of damage to the big birch trees in the col between Mt. Martha and Owl’s Head. Most of the damage seemed to have been to the tall conifers along the ridgeline.

And lastly, whenever your circumstances allow you to take on some trail maintenance duties, I think you’ll find it to be a very rewarding experience.

As always Rita, your comments are much appreciated. And yes, I completely agree that one of the many things for which we can be grateful are the beautiful places we have for outdoor recreation, such as my environs here in New England, and yours in the American West.

Hi John, I can't believe the destruction that happened on the Halloween storm. I don't think people in Massachusetts understand how many trees fell. Thank you for trail work you do and for your trip reports.

Thank you for taking time to post such a thoughtful note. I’m very appreciative!

Yes, the Halloween Storm was definitely destructive. And as you suggest, there are probably many folks who are unaware of just how much damage was done. But on a positive note, we can be very thankful that a lot of clean-up work could be done before any major snowstorms hit us. However, now that the snow is here, further clean-up will likely have to wait until spring, particularly in the more remote locations that were impacted by the storm.