Mini-Exploration of a Pond in Carlton Notch (Maine)

In late June 2016, I had a half-day available for hiking.  It was decided to use this time to hike a portion of the Highwater Trail that I'd never hiked.

The Highwater Trail runs through portions of Maine and New Hampshire.  It starts at a trailhead in Maine near the junction of Wild River Road (FR 12) and ME 113, and it soon crosses the Wild River on a footbridge, and then it follows along the northwest side of the river for about 9.7 miles.  However, my modest goal for the day was merely to hike the portion of the Highwater Trail that runs through Maine, and then turnaround at the New Hampshire border.  Hiking just that segment of the trail constitutes a trek of about 3.6 miles (round-trip).
As is true for most of my on-trail hikes, I like to use Google Earth to study the landscape that surrounds my route of travel.  This is done to determine if there are any off-trail features that I might want to explore via a bushwhack.   When studying the satellite imagery prior to this hike, I noticed that there was a pond located a few tenths of a mile north of the Highwater Trail near the NH/ME border.  Various topographic maps identified this location as Carlton Notch, but none of those maps showed a pond at that location. (GPS: N 44 21 26, W 71 00 47).
It's a bit unusual for a pond to show up on satellite imagery, but be omitted from a topographic map.  However, it does occasionally happen, especially for bodies of water such as beaver ponds which aren't a permanent part of the landscape.  Regardless, "compulsive me" decided to bushwhack to this location to check it out.  Yup!  There is indeed a pond there!

Besides being a beaver pond, there is possibly another reason why this body of water doesn't show up on topographic maps.  I did a little research online which of course doesn't always produce the most reliable data.  Regardless, perhaps the information presented in the following paragraph might shed some light.

The U.S. Geological Survey's (USGS) National Mapping Program (NMP) lasted almost 50 years (from the mid-1940s until the early 1990s).   Every year, up to 1,400 quadrangles are being revised.  However, most revisions are minor, and very few revisions include field-verification of content or contour updates.   And so for now, with their reduced funding, USGS topographic map revisions are being done with remote and secondary sources.  But for the future, USGS is exploring alternative map products (based on more modern data sources and techniques) as potential replacements for their traditional topographic map series of the past.

As indicated in the "INTRODUCTION" above, the satellite imagery is correct.  As seen in the photo below, there is indeed a pond!  It doesn't appear to be a vernal pool.  Instead, it looks more like an abandoned beaver pond.  I saw no signs of a lodge, or recent beaver activity.  But, at the north end of pond, there were signs of what appeared to be an old beaver dam.

Reaching the pond was done by bushwhacking northward off the Highwater Trail for several tenths of a mile. The woods were open and very "bushwhacker-friendly", as seen in the photo below! 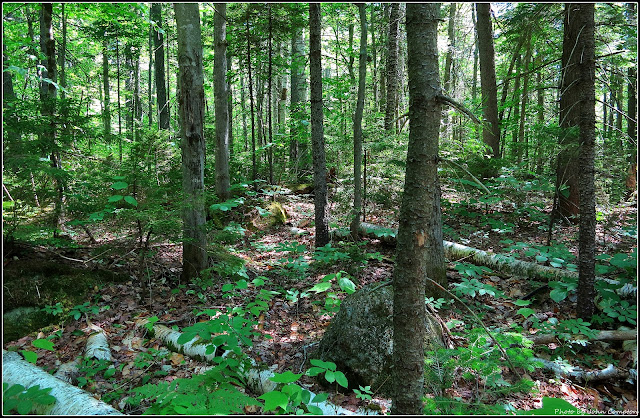 The segment of the Highwater Trail that I hiked was a pleasant trek through attractive woods.  There are spots along the route where the scenic Wild River is visible from the trail.  Near the NH/ME border, I did a short off-trail excursion down to the river for a closer look.  As seen in the next photo, the Wild River wasn't very "wild" on this particular day.  Quite tame, actually! 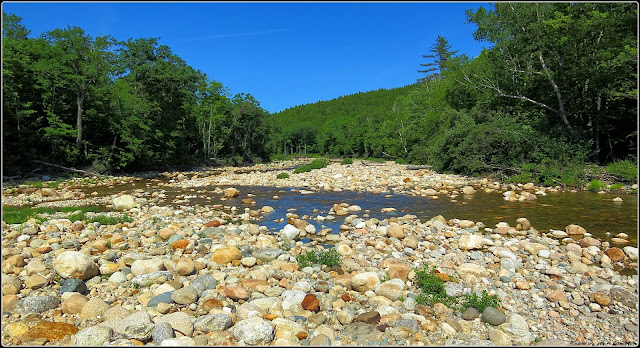 This next photo shows the picturesque footbridge bridge over the Wild River near the trailhead for the Highwater Trail. 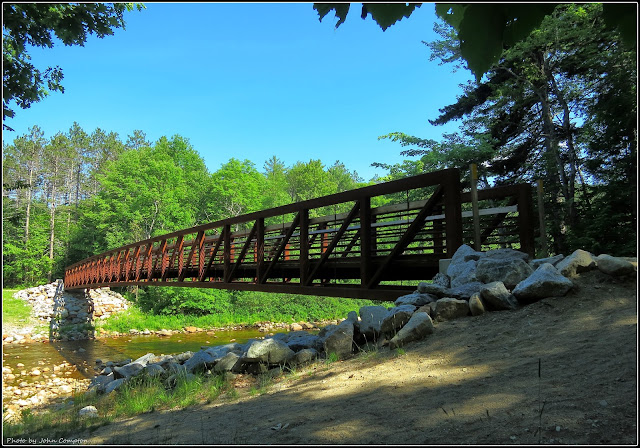 This current bridge over the Wild River was completed in 2013.  It replaced an earlier bridge that was destroyed by Tropical Storm Irene in 2011.  Below is a composite photo which shows the former bridge as it once stood (LEFT PANEL), and the remains of the former bridge following the aftermath of the storm (RIGHT PANEL). 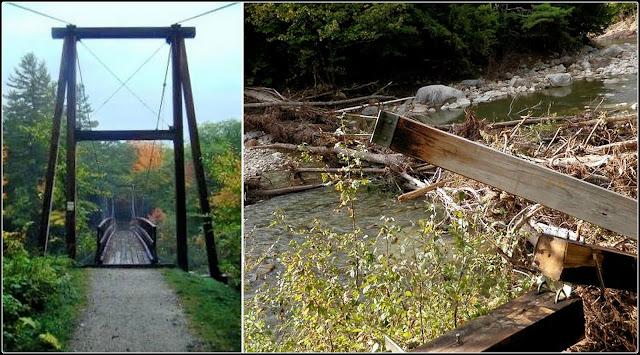 I must say that's it's typical that funds for scientific purposes are the first to be slashed from the budget. Sad but true. (Maybe you could provide input for the USGS's mapping program!)
Regardless, you found an attractive beaver pond!

When I toured Vermont in 2013 I couldn't believe the number of bridges destroyed by Irene. That was quite a destructive inland storm.

You found another short but sweet hike, John. And it looks like you enjoyed perfect weather!

Thanks once again Rita for being such a faithful follower of my blog postings.

It was indeed a sweet hike. And although the hike was a bit short, I find these half-day adventures to be gratifying nonetheless. It allows me time in the morning to do whatever work needs to be done, and then spend the remainder of the day hiking in the woods.

And yes, I agree with your sentiments about the lack of funding for scientific purposes. It seems rather shortsighted to me. Hopefully, this trend will be reversed sooner, rather than later!