In mid-May of 2016,  I was looking for a "Goldilocks" hike.   One that was not too short; not too long; less than an hour's drive to trailhead; and one that I had not done in a while.   After mulling over several potential candidates,  I chose to drive to the Unknown Pond trailhead on Mill Brook Road (Stark, NH) to launch a simple 'out and back' trek to Unknown Pond, and to the nearby ledges located NNE of the pond.

Unknown Pond is a tarn that rests on a high plateau (about 3,170 ft) in a relatively remote area of the White Mountain National Forest.  Regarding the origin of its name, I've never read any documented explanation, but can only speculate that this body of water was "unknown" to the general public for most of its existence.  It wasn't included in the White Mountain Guide as a hiking destination until the 1940s.

The map shown below will provide a general idea of the location of this hike.  The trails I hiked are highlighted in yellow. 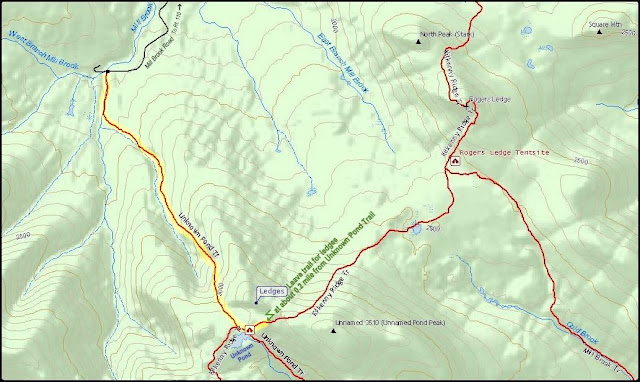 The hike to Unknown Pond itself is a little over 2 miles from the Mill Brook Road trailhead.  The trek to the ledges above the pond involves hiking about 0.2 mile along the Kilkenny Ridge Trail (northbound), followed by an off-trail trek of about 0.3 mile.  And so, the overall distance for this little adventure is a little over 5 miles, round-trip.

Further regarding the 0.3 mile off-trail segment to the ledges, be advised that there is a sketchy bootleg-trail.  However, also be advised that as of the time this report was written, this pathway can be challenging to locate.  Therefore, you should attempt to reach the ledges with the mindset that it might entail a bushwhack.

PHOTO 1: If you use the Rt. 3/Rt. 110 combination to drive to the Unknown Pond Trailhead on Mill Brook Road, then you will get several roadside peeks of Percy Peaks along the way.
PHOTO 2: Looking across Unknown Pond toward The Horn.
PHOTO 3: The view from ledges located NNE of Unknown Pond.  From L to R, it includes peaks in Carter-Moriah Range; Crescent Range; Presidential Range; Pliny Range; Pilot Range (namely, The Horn and The Bulge, as seen above the south end of Unknown Pond).
PHOTO 4: Judging from the numerous piles of moose poop (like the one at bottom of next photo) on the ledges, one could speculate that the moose use this place to conduct "their business" while enjoying the views! :-)
PHOTO 5: From the backside (north side) of the ledges above Unknown Pond there is a nice view of the huge cliffs on Square Mountain and Greens Ledge, both of which are fantastic bushwhack destinations!
PHOTO 6: Also on the backside of the ledges is a small forest of oddly shaped birch trees.  According to a friend who is a knowledgeable outdoorsman, these trees might be the Heart-Leaved Birch (Betula cordifolia).  They are found only in the Eastern part of North America (northern NY State; northern New England; eastern portions of Canada).
PHOTO 7: While standing on the bridge located just a few feet from Unknown Pond trailhead, there is an interesting view of the confluence of Mill Brook with its West Branch.
PHOTO 8: A couple hundred feet west of the Unknown Pond trailhead, there is this little cascade.  It sort of looks like it could have been a dam.  However, it also looks like a huge tree might have fallen perpendicular to the brook which has created a "dam-like" appearance.
PHOTO 9: With Unknown Pond being located in the northern reaches of NH, the wildflowers were just beginning to pop out.  I only saw a few Trillium here and there along the route to Unknown Pond.

Great report John. I've had those very ledges on my list for several years. I'd completely forgotten about them. Hopefully I'll remember, and make it there soon.

I agree with JustJoe that this is a great report! This not-too-short and not-too-long hike includes a wealth of stunning scenery, not to mention the Heart-Leaved Birch (never heard of this tree!), the pretty trillium, and the opportunity to perhaps see moose—or at least their droppings!
I'm thinking of purchasing a solo kayak and Unknown Pond looks like an excellent destination for a paddle!

Thanks for your kind words.

When you come up north to visit the ledges, chances are you will want something that is a bit more aggressive than my “Goldilocks” hike. One idea would be to do an 11+ mile loop starting at Unknown Pond’s south trailhead on York Pond Road, then trek up to the pond and the ledges, and then continue onward to the Kilkenny Ridge Trail (southbound) to The Horn, The Bulge, Mt. Cabot, and then complete the loop via the Bunnell Notch and York Pond trails.

Rita, thanks ever so much for reading my report and for taking time to post your comments.

Kayaking at Unknown Pond is something I’d never thought about. Considering that the only way to reach this destination is by hiking to it, I suppose one would need to use one of those “backpack-able” kayaks that I’ve read about. Regardless, if you follow through with your idea of purchasing a kayak, I’ll be most eager to read your postings about your waterborne adventures!

Great report, John! Those ledges are a "top 10" whacking destination and Photo #3 is the best I've ever seen from that vantage. Stunning!

Steve . . . thank you for your very generous comments about this report.

You would likely agree that we are very fortunate to live in an area where so much natural beauty exists. This type of environment is ideal for a person like me who engages in “point and shoot” photography. It’s sort of difficult NOT to get a few notable images when tramping through the woodlands of New England and Upstate New York. :-)