Thanks to some inspiration and information provided by one of my Facebook friends (Tim Seaver), I moved a hiking destination way up on my list.  My target was Marshfield Ledge located on public land east of Marshfield, VT.  It's about a 30-minute drive eastward from Montpelier, VT.  And for me, it was just a little over an hour's drive westward from my home in Bethlehem, NH.  This hike was done in late April 2016.

The one-way hiking distance from where I parked to the top of Marshfield Ledge was about 1.6 miles.  An old logging road was used for roughly the first 0.8 mile.  And for the remaining 0.8 mile, an open hardwood forest made for a very easy bushwhack.

Shown below is a map which has my route superimposed.  You'll note an extra little side trip off the main route that I followed.  On my way back to the car, I hiked a short distance along the trail that rock-climbers use to access the base of Marshfield Ledge.  I'm certain this trail would eventually lead to the base of the cliff where the rock climbers head straight up the face of the cliff.   But what I'm uncertain about is whether there is a pathway from the base of the cliff that could be hiked to the top.  It will be something to check out the next time. ;) 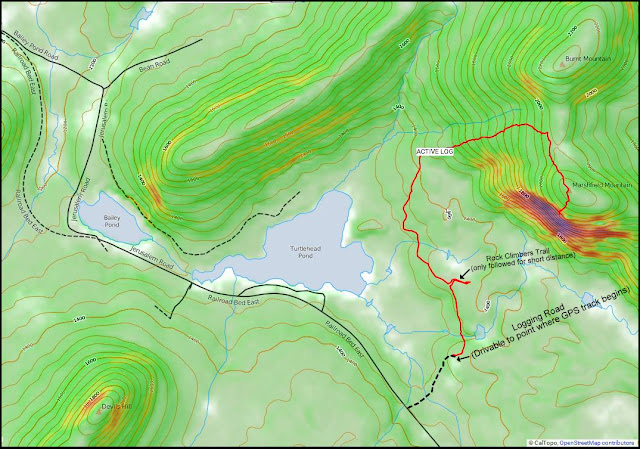 Below is a panorama showing the 180 degree view from Marshfield Ledge.  I won't even attempt to name all the VT peaks that are seen.  Roughly, the view begins with Owlshead Mountain (at far left, center of screen); sharply pointed Spruce Mountain is seen on horizon (center of screen); Turtlehead Pond is at far right with Camels Hump mountain above the pond on the distant horizon.

The next photo hones in on the westward view from Marshfield Ledge.  I'm unsure about my ability to correctly identify VT peaks, but think Hardwood and Kettle Mountain are at far left; Devils Hill is in foreground to left of Turtlehead Pond; on distant horizon are maybe the Sugarbush ski slopes?; Camels Hump mountain is on distant horizon, on right side of Turtlehead Pond.

OTHER PHOTOS FROM THIS HIKE:

And so, the two photos presented above will provide an idea of the view from Marshfield Ledge.  The next few photos will provide some idea of what was seen en route to the ledge.
While en route to the hike to Marshfield Ledge, I drove along Lower Depot Road where there is a roadside view of Marshfield Falls.   Once upon a time, this waterfall stood alone in the quiet woods.  Today however, this long sloping cascade on Marshfield Brook passes beneath two roadway bridges as it tumbles down to meet the Winooski River.
And finally, at the time this blog report was written, some interesting information about the history of Marshfield, VT could be accessed by clicking HERE.

That's a pretty significant drop-off from Marshfield Ledge—I can understand why you wouldn't have wanted to fall over the edge!
I like the views of the Vermont Peaks. Spruce Mountain reminds me of one of our steep-walled western mountains. And Turtlehead Pond is huge. Are there recreational homes along its shoreline? Looks like it could be a good place for waterfowl if it's not too heavily developed.
Thanks for the introduction to yet another New England destination, John!

Yup! The drop-off from Marshfield Ledge is indeed significant! I was delighted to have found a large flat spot where I could enjoy the vista without fear of toppling over the edge of the ledge.

And yes, those are recreational homes along the shoreline of Turtlehead Pond. Regarding waterfowl, I could hear the haunting call of a Loon when I was taking the roadside snapshot of Marshfield Ledge as viewed across Turtlehead Pond.

Lucky you—the call of the Loon is my favorite sound in all of nature!
Tim and I will be traveling to Isle Royale National Park in Lake Superior this September. Hopefully I'll get my fill of Loons while there!

I’ll also have to say “lucky you” for the trip you and Tim have booked to Isle Royale National Park. As I understand it, this Park has the highest concentration of Loons in Michigan. And, visiting there in September should be early enough to assure that you are there before the Loons begin their autumn migration.

And, we are in total agreement, Rita. My favorite sound in all of nature is also the call of the Loon!