On good weather days, it doesn't matter what route you take to Mt. Prospect (Weeks State Park, Lancaster, NH), you can be assured of rewarding views.  And such was the case when I hiked to this location in mid-April 2016.

Rather than doing an "out and back" trek to Mt. Prospect via the Auto Road, I prefer to construct a loop hike.  For my April 2016 trek, I hiked up the ski slope, and then did a short 0.25 mile bushwhack from the top of the ski slope to the Auto Road.  On the return leg of the loop, I walked the Auto Road and Heritage Trail back to my starting point.  On other occasions, I've hiked a combination of the Old Carriage Road and the Around the Mountain Trail back to my starting point.

Seen below is a map showing the Auto Road, plus the various hiking trails on Mt. Prospect, and also the bushwhack route that I took on this trek.  (As of the time this report was written, a terrific report about hiking at Weeks State Park could be accessed by clicking HERE.) 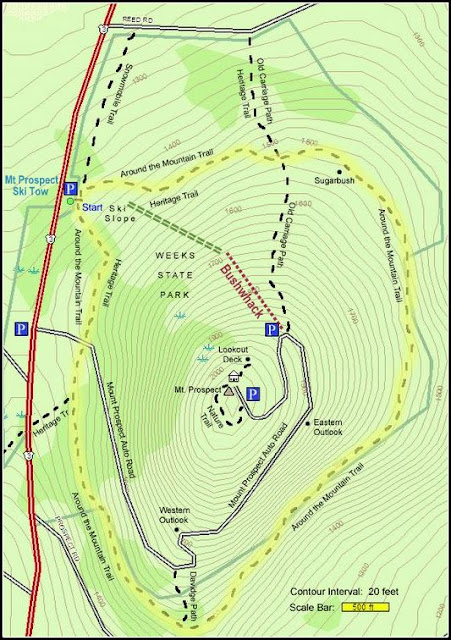 Shown below are a series of photos taken on my trek to Mt. Prospect.
The Mt. Prospect Lookout is a stone tower that was part of the summer estate of U.S. Senator John W. Weeks (author of the Weeks Act which created National Forests in the eastern U.S.).  It was built as a private observation tower in 1912. But, when the estate became a State Park in 1941, the New Hampshire Division of Forests and Lands added a round, enclosed fire-lookout cab which remains in active service today.

Very nice post, John! The Auto Road looks like one of those lonely highways!
You're right, the views are sensational from everywhere along this hike. Wow, Senator Weeks sure had a very nice summer home! Wonder how much money senators made in those days?
Even though I follow environmental news I had never heard of The Weeks Act, but I'm grateful that we had a few visionary legislators a long time ago who protected these areas for all of us to enjoy.
Happy Earth Day!

Hi Rita . . . it’s great that the general public can now enjoy the property that was once the summer home of Senator Weeks.

Further regarding the Weeks Act, several major national forests in the eastern U.S. were created as a result of this Act, including the White Mountain National Forest located in northern NH where I live. Another one is the Allegheny National Forest in your home State of Pennsylvania.

Hope you had a Happy Earth Day yesterday! :-)

Geez, you weren't kidding...definitely rewarding views! So, (dumb question), is the ski slope still open? It doesn't look grown up at all which would make me believe it's maintained to some degree.

Thanks for dropping by to read my blog and post your comments. Much appreciated!

Regarding the rope tow ski area at Mt. Prospect, I’m pretty certain that it still operates during the winter season. It has its own Facebook page (link below) that you might want to check out.
https://www.facebook.com/pages/Mount-Prospect-Ski-Tow/145333402191028

And regarding the condition of the slope as seen in my photos, it was early Springtime when I did my trek. During the Summer growing season, tall grass and weeds fill the ski corridors.