A Bushwhack to Cone Mountain (near Thornton, NH)

Since the mid 1800s there have been hiking trails in the Waterville Valley area of New Hampshire.  One very popular trek is a loop hike via the trails that go over Welch Mountain and Dickey Mountain, which are known collectively as simply "Welch-Dickey".

Located very nearby is a lesser-known peak named Cone Mountain which is separated from Welch-Dickey only by the narrow corridor named Dickey Notch.  A visit to Cone Mountain entails a bushwhack which unto itself is relatively easy.  However, special care should be taken to do this trek by staying on National Forest public land, and avoid trespassing on the parcels of adjacent private land.

Over the years, I have bushwhacked to this destination several times, and have used a different route on each outing.  All of my treks were launched from the Welch-Dickey trailhead.  The Brown Ash Swamp XC-Ski/Bike Trail was followed northward into the Dickey Notch to a point where I could head westward on public land to reach Cone Mountain.

If you are a hiker with off-trail experience, perhaps the map shown below will be useful in planning a route to explore Cone Mountain. (The red and orange shading indicate slopes that have a particularly steep/rugged gradient.) 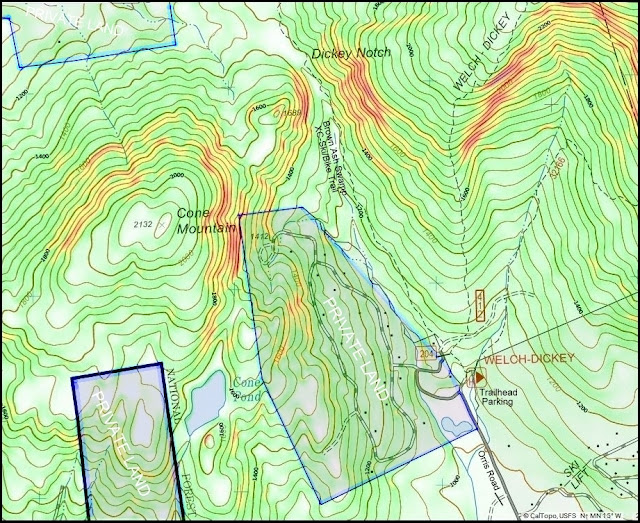 PHOTOS:
(These photos were taken in early February 2016 during my trek to Cone Mountain and surrounding ledges.)

John, Thanks for an excellent report and photos for a very fine destination. That north-viewing ledge is one of the best spots in the region. There surely is sparse snow cover in the Cone area right now!

. . . and thank you Steve for your kind words about my posting!
I see from your always-skillful blog posting (link below), that you too have recently enjoyed the delights of the Dickey Notch area.

Beautiful views of the Franconia Range. I especially like your photo of the ice cliffs. It looks like you're having beautiful weather for hiking, John. But you need a few good snowstorms!

Thus far, it has been a strange winter for northern NH. The negligible snow depth has been good for bushwhacking, but for XC-skiing . . . no so much! Although I’ve XC-skied a few times, the experience has been much less enjoyable than past winters when snow conditions were more ideal.