This will be an experiment.  On a sporadic basis, I plan to post reports about some adventures undertaken before my 1HappyHiker blog was created.  However, if reader feedback suggests that these postings from days of yesteryear are of little interest, then I'll simply end the experiment.

Anyway, in July 2009,  I ventured to the top of a  large cliff located on a NW spur of Hutchins Mountain in the Pilot Range.  This cliff is unnamed on any map that I have ever come across.   However, it is my understanding that some of the locals refer to it as Owl's Head Cliff.

This cliff is a prominent feature on the landscape which can be seen from many places in northern New Hampshire.  Where I most often see it is when traveling northeast on Route 115 along the base of Cherry Mountain.  When looking northward, I can see it there, taunting me!

Shown below is a photo of the cliff.   However, it was not taken from Route 115.  It was taken from a much closer vantage point near Lost Nation Road.  The cliff is on the left of the photo, and Mt. Hutchins is the peak on the right.
This cliff resides well within the boundaries of the White Mountain National Forest.  However, there are no official trails leading to it.  Although it would be a long and arduous approach route, you could bushwhack to this place completely on public land.  Thankfully, I had the good fortune of being granted permission by a landowner to begin my bushwhack on private land which made for a somewhat easier approach.

The top of this cliff is a very pleasant place to just “hang-out”.  It’s flat and it’s roomy enough that you don’t feel like you’re going to fall over the edge with one wrong move!  Even though the photos that were taken don't do it justice, the views from the cliff are expansive and quite remarkable.

Shown below is a sample of the view looking SSW.  On the distant horizon (beginning on the left), peaks in the Willey Range can be seen, as well as the top of Mt. Carrigain.  As the vista extends further to the right, peaks can be seen in the Twin Range, Franconia Range, as well as Mt. Moosilauke.
The next photo shows a WSW view.   If you look closely, you can see the red roofs of the Lancaster fairgrounds complex.  It’s adjacent to the large green field that is seen in the upper portion of the image.
The final photo shows this massive cliff as seen from a point near its base. There are two things that should be mentioned here.  One, I did not use a frontal assault to climb this cliff!  I approached it from its backside.  Secondly, this photo shows a lot of the cliff.  HOWEVER, there is still a sizeable portion of the cliff that is hidden behind the trees in the foreground of the photo.
The map shown below provides very little detail, but perhaps it might be somewhat useful for orienting yourself as to the location of the cliff. 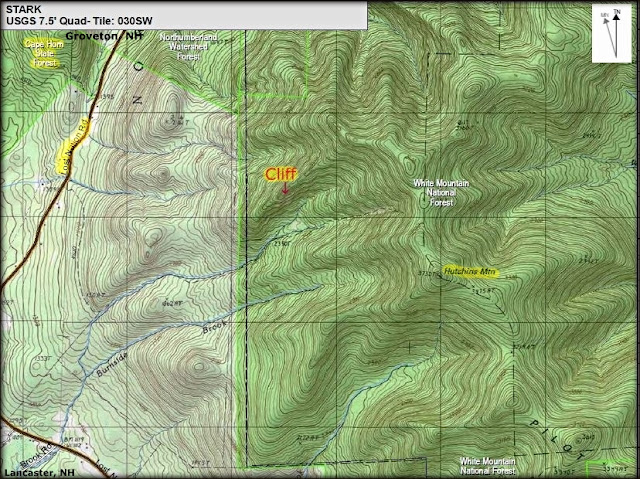 To sum it up, this was an interesting place to visit.  If it were more accessible, then it would likely be a very popular destination.
Posted by 1HappyHiker at 10:03 AM

I'm fine with this experiment. :) I enjoy reading your posts, no matter when they are from.

Just a brief, but most sincere “thank you” for your feedback. Very much appreciated!

I, too, am fine with older posts. You will notice that many of my posts are "pre-blog", with the oldest one predating my blog by 27 years!

I love the look of Owl's Head cliff. Looks like it would be a preferred hangout for rock climbers—if it was more accessible.

I agree with Ken; I enjoy reading about your adventures, no matter what year they occurred. I like to think of my blog (and yours too) as "timeless"!

Rita, thank you for your feedback!

Your assessment about the “timeless” aspect of blogs (yours and mine) certainly has merit considering that a blog posting becomes woven into the fabric of the World Wide Web which is a searchable and enduring resource, presumably for many years to come. This is in stark contrast to a platform like Facebook (which I use frequently) where postings are short-lived, sort of like “a candle in the wind”! :-)

And, your comment about the cliff possibly being a “hangout” for rock climbers also has a ring of truth. I’m only going on hearsay, but have been told that it was once a popular spot for climbers until all the easy access routes to the cliff were posted by landowners. But, it wouldn’t surprise me to learn that there are still some climbers who find a way to access this cliff, via a “friend of a friend”, etc.

Great report, John - that cliff has taunted me for years and I still haven't been there. I agree with Ken and Rita, keep them coming, regardless of the "when"!

Thanks Steve for your kind words, and for your encouragement to occasionally post some of my adventures from days of yesteryear. Hopefully, these older postings will provide an enjoyable read for some of those who follow my blog.

I'll echo what everyone else has said John. If you have more of these gems in your achieves, please do share them.

I did the Pilots from that side a few years ago and do not remember noticing that cliff on the drive in. It has some really great views.

Thanks Joe! I truly value your opinion. It’s gratifying to know that if I dust off some postings from days of yesteryear, they will be favorably received by you and others.