WARNING:  This blog report is a bit different from my previous postings.  It's mostly narrative, and has only one photo, and one map!

Anyway, a few weeks ago, I did a relatively short 6.6 mile "out and back" trek using the Reel Brook and Kinsman Ridge Trail.  My simple destination was the point where the power line intersects Kinsman Ridge, just above Bog Pond.

Over a century ago, this location was known as Kinsman Notch, while today’s Kinsman Notch was referred to as Moosilauke Notch.  Somewhere down through the years, the name of Kinsman Notch was transferred from its original remote location to the more accessible mountain pass along Lost River and beyond toward the Wildwood Campground.

This hike was done mainly for the exercise, and for the adventure of snowshoeing along a trail that is infrequently used in winter months.  In terms of views, "they are what they are"!  The power line severely mars the vista that includes Bog Pond in the foreground with the Osceolas; Scar Ridge; Loon; Tecumseh; Sandwich Mtn on the horizon.

The view just described is shown below in the composite photo.  For the LEFT frame, photo-editing software was used to remove the power lines and the ski runs on Loon Mountain.  The RIGHT frame shows the vista as it actually exists.

It's fun to think that the view on the LEFT frame of the photo could be similar to what Nathan Kinsman might have seen in the early 1780s when he is speculated to have traveled from the vicinity of North Woodstock to the Easton area by constructing a crude pathway through the original Kinsman Notch where the power line and Reel Brook Trail exist today.

Unfortunately, there is no written record of the route that might have been used by Nathan Kinsman in the 1780s to travel from North Woodstock to Easton where he and his family would become the first permanent settlers of that area.  However, with the aid of my friend Joanne Jones, a written reference (see below) was found which documents that a road did run through the old Kinsman Notch in the 1820s.

Excerpt from 1897 Granite Monthly; Volume 23, page 12:
"About 1820, a road was constructed through Kinsman Notch, that led by Bog lake, and which connected the valley with the town of Landaff."

Please understand that the following is pure speculation on my part.  If a rough pathway was indeed hacked out by Nathan Kinsman in the 1780s, then perhaps it continued to be used over the years, and was then eventually upgraded in the 1820s to become the road that is mentioned in the Granite Monthly article?

Although the roadway of the 1820s eventually ceased to exist, one can say with a fair degree of confidence that travel along a corridor between North Woodstock and Easton continued over the years.  One piece of evidence to support this theory is that the earliest editions of AMC's White Mountain Guide (first published in 1907) describes a trail running from Easton to the North Woodstock area.  It was referred to as the Bog Pond Trail.

On the west side of the Kinsman Ridge, the old Bog Pond Trail followed nearly the same route as the present-day Reel Brook Trail.  And on the east side of the ridge, it followed a corridor that ran along Bog Pond and then continued eastward to the vicinity of North Woodstock.  (The present-day Georgiana Falls Trail is likely the only surviving segment of the eastern portion of this old route.)

When taking a look at a current-day map of this area, one can imagine a route that could have filled the gap between today's Reel Brook Trail and Georgiana Falls Trail. 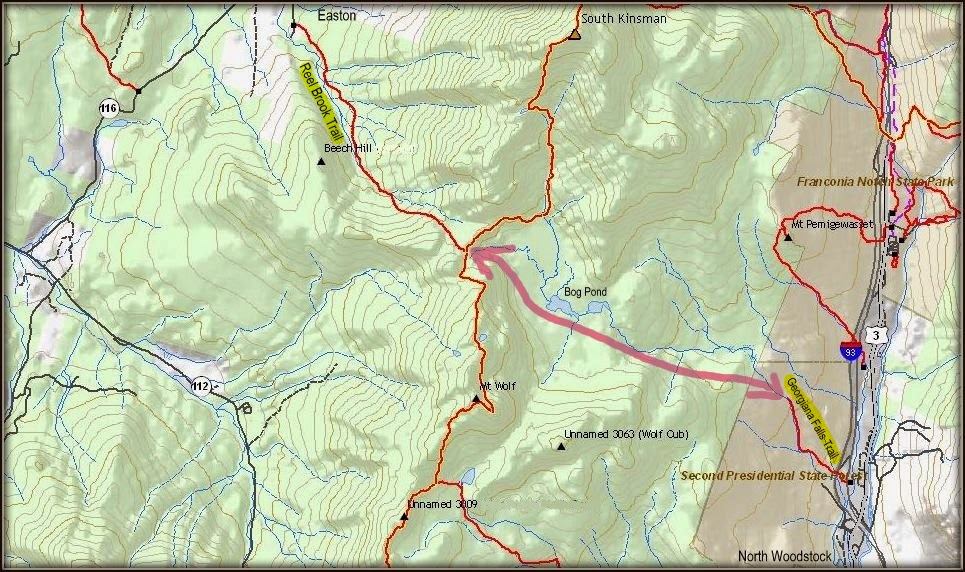 To sum it up, this blog posting is by no means intended to be a scholarly piece of work.  Rather, it's just a fun piece of speculation about the view that Nathan Kinsman might have seen in the 1780s, if in fact his route from North Woodstock to Easton took him across the old Kinsman Notch corridor.

1) More in-depth information about Nathan Kinsman, and the old Kinsman Notch has been written by Mike Dickerman.  Click HERE, and then scroll down through the article to access his Kinsman essays.

3) Also, there is a wealth of information contained in a 1976 publication entitled "Looking Back at Easton" written by Ruth W. Towne and Chris M. Jerome.]

This was a fun little project. There is yet another fascinating bit about this old corridor between Easton and North Woodstock that I didn’t include in this report since the only information I could find was extremely sketchy. However, it seems that “Old Peeling Road” was the location that is shown on deeds from the 1820s and 1830s for properties that were once located along what is now the western end of the Reel Brook Trail. This leads one to speculate whether the Easton/North Woodstock corridor eventually evolved into a road that somehow led to the now abandoned village of Peeling, NH that was located north of Elbow Pond near Mt. Cilley.

John, its always interesting to hear about the history of the trails and mountains in your area. And I agree, what fun to imagine the vistas that greeted the early settlers and travelers. We have so many man-made scars on our landscape now—power lines, industrial waste sites, cell and electrical towers, and the recent endless miles of drill pads and gas wells—and so I love your idea of photo editing those things out of pictures! (Unfortunately they still exist, though.)
Even though this wasn't your "typical report", it was still a good read!

Great post, John. I love reading about the history of these old routes, that's part of why I like abandoned trails so much. I hope to get out to this area this year, as I'd like to go up to South Kinsman via Reel Brook and the KRT.

Yes, wouldn’t it be lovely if we could truly eradicate the scars on our landscape with a computer software program. But who knows, maybe there will be some future fix that is unimaginable with today’s level of knowledge. Then again, perhaps I’m being a bit quixotic? :-)

Thanks again, Rita, for reading my blog, and posting your thoughts.

I’m an avid follower of your hiking adventures, and can detect that you are indeed among those of us who are fascinated by the history of the White Mountains of NH.

Regarding the trek you mentioned about going to South Kinsman via the Reel Brook and KRT trails, perhaps it’s already part of your plans, but if not, then give some consideration to doing a traverse. At the risk of appearing to be “self-promoting”, take a look at my blog posting from 2011 (link below). This ranks near the top of my all-time favorite hiking adventures!