It has been nearly 5 years since I last visited East Royce Mountain in western Maine near the New Hampshire border.  In keeping with my desire to try doing something new for each of my hikes, I began my hike from the Laughing Lion Trail which was a corridor that was new to me.  This trail was just one component of a loop which also involved the Royce Connector Trail, and the East Royce Trail, plus a 15-minute road-walk along Rt. 113 from the East Royce trailhead back to my starting point at the Laughing Lion trailhead.

This hike was done in mid-May.  The total distance for the loop was about 4 miles, and there was an elevation gain of about 2,000 ft.  This loop is depicted on the Google Earth image shown below (Click on photo to enlarge).
As to how the Laughing Lion Trail got its name, I presume it was named after a popular rock climbing spot called Laughing Lion Cliff on the southeast slope of East Royce Mountain.  I've not personally seen the "lion face", but must admit that I've not made a concerted effort to do so.  Regardless, shown below is an image which I grabbed off the Internet from SummitPost.org.  The "Laughing Lion" image is contained within the area circled in yellow.  You really need to use your imagination to visualize the lion, but with any luck the image will eventually become apparent.
Several nice vistas of the surrounding mountains were seen during the course of this hike.  In my opinion, the best locations for these were from various vantage points around the summit area of East Royce, as well as from ledges reached by a short bushwhack off the southeast side of the Royce Connector trail.  In addition to the mountain vistas, there were also a couple of picturesque cascades along the route.

Shown below is a collection of photos taken during my hike.

For anyone who has difficulty with conjuring up an image of a Laughing Lion from the photo posted in this report, you are not alone!

Shown below is a slight enhancement of the photo.  The eyes and mouth have been somewhat accentuated, and they have been labeled.  But of course, this is only my perception of what constitutes the Laughing Lion image.  Others might envision a Laughing Lion using other features of this rock formation. 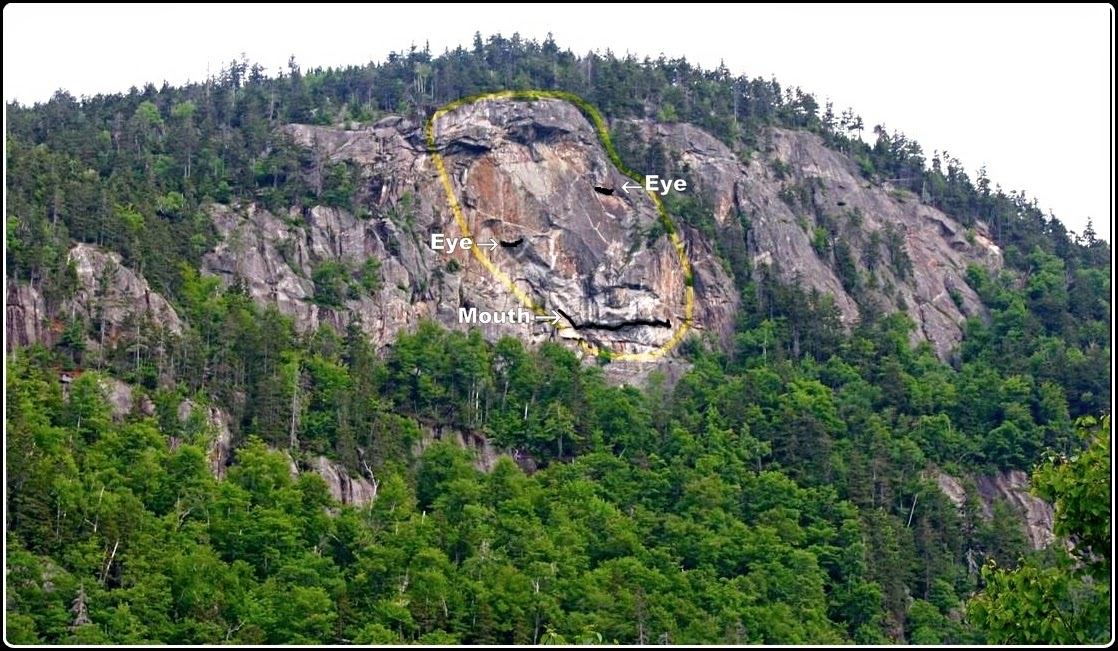 Sorry, I tried to use my imagination but I just couldn't see the Lion Face! Regardless, this looks like a fine place for a springtime hike, even with the snow.
The purple trillium is beautiful. And it's always nice to see evidence of Moose!
Thanks for taking readers along to Maine, John!

I think I see the lion's head in profile--the small black sliver middle right is its eye; for me anyway :-)

The Royce's are one of my favorite hiking areas, although I have not been there nearly enough. Love the moosey, wild feel of the place, especially on the way to West Royce. Have not tried Laughing Lion Trail, but now that I've met the Lion will have to explore. Thanks for the reminder that this is a lovely hiking spot.

Rita, you are not the only one who is unable to see the face of the Laughing Lion! I’ve posted an addendum to this report which includes a slightly enhanced version of the photo. The eyes and mouth have been exaggerated a bit, and they are labeled.

As always, thank you very much for being such a faithful follower of my blog!

As mentioned in my reply to Rita, I’ve added an addendum to my report which includes a slight enhancement to the Laughing Lion photo. But bear (no pun intended) in mind, this is only my perception of the Laughing Lion image. Others might be able to envision the Laughing Lion using other features of this rock formation.

Regarding the Royces (and other spots in Evan Notch), I totally agree that there is feeling of “wildness”. Although it might sound odd, I enjoy the actual act of hiking through the woods in this area, even more than the views.

Lastly, regarding the Laughing Lion Trail, as indicated in this report, this was my first time to hike this trail. I’d heard that it was steep and rugged. It had some steep spots, and there was some degree of ruggedness. But overall, I found it to be not much different from many other trails that I’ve hiked in the White Mountain region.

John, I enjoyed your report. Thank you. We tend to spend increasing amounts of time in Evans Notch with each year. I expect there will be several trips there this summer, including this very hike. Thank you, again.

Thank you Tom. It's so cheering to know that you enjoyed my report!

Likewise, I very much enjoyed reading the report you posted in June 2013 about the Evans Notch area (link below). As indicated in my comments to that report, I totally agree with your assessment that one of the many pleasurable things about hiking in Evans Notch is that it's "far from the conga line of Franconia Ridge or the Crawford Path"!