A Hike to Mt. Cube from Baker Road via Cross-Rivendell Trail

In mid-November, my friend Marty and I hiked to Mt. Cube.  Our round-trip trek of approximately 5 miles included Mt. Cube's South Peak, as well as its North Peak.   We did a simple 'out and back' trek which began and ended at the Cross-Rivendell trailhead on Baker Road near Orford, NH.

If you'd like to get an idea about our route of travel, the Rivendell Trails Association (RTA) has a nice online interactive trail map (click HERE).  In addition to this trail, there are two other routes to Mt. Cube, i.e. the Kodak Trail, and the Mt. Cube Trail (part of the Appalachian Trail).  All three trails are described in the current edition of the White Mountain Guide.

With a name such as Mt. Cube, one might think that this mountain has a boxy or cube-like shape.  However, such is not the case.  Apparently there are two legends, both of which contend that 'cube' is a corruption of the word 'Cuba'.  One legend maintains it was named for a dog named 'Cuba'.  And yet another legend indicates that the name has something to do with a West Indian sailor (presumably from the island of Cuba) who was an early settler in this area.

Shown below are photos of the things about this trek that were of greatest interest to me.

The trail itself is beautiful and meanders via several switchbacks through attractive forestland.
There are many pleasant views, but the one that I found most impressive was the northeasterly view from North Peak.  Upper Baker Pond is in the foreground, followed by Mt. Moosilauke on the horizon.
A zoomed photo of the view shown above provides a larger image of Mt. Moosilauke, and it also shows the buildings at the Glencliff Home nestled at the foot of the mountain (far left), as well as the tip of Mt. Washington's summit peering over a ridgeline (far right).
It was interesting to see many old dates (a few of which are shown below) that are carved into the quartzite ledges on both South Peak and North Peak.  Also I was fascinated that on South Peak you can still see the survey pin and etched triangle which are holdovers from the 1870s when this was a triangulation station for the U.S. Coastal Survey.
On our way home from our hike to Mt. Cube, Marty and I stopped at a roadside viewpoint along Rt. 118 as we approached the area of North Woodstock, NH.  From this spot we enjoyed an impressive sunset view with the moon rising over the nearby mountains.  It was a great ending to an already enjoyable day!
To sum it up, Mt. Cube is a worthwhile destination.  For any reader who has yet to visit this mountain, I would encourage you to give it a try!

Shown below is a homemade map that I put together which shows the trails used for this trek.
Perhaps some readers might find this to be useful. 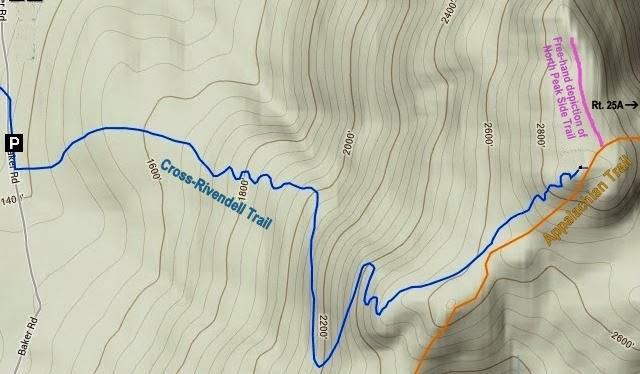 Fine report, John - Cube is one of the best of the lower peaks! It's amazing how well those etchings are preserved in the quartzite.

Thanks Steve!
Your Blog reports about Springtime visits to Mt. Cube are very enjoyable. In addition to the distant vistas, there is the added viewing pleasure of the spring wildflowers. This is a hike to put on my list for definite consideration when spring rolls around!

Really nice - like Steve, I like those carvings in the rock. It truly is touching a piece of history, and you can't always do that. How many museum pieces from that era are we allowed to touch, if you think about it. Here in the mountains, we can touch and walk along with those from many different points in time.

Thanks for your very perceptive comments, Summerset! I had never thought about those vintage inscriptions on Mt. Cube's ledges as being "museum pieces". But now that you mention it, I completely agree that they could indeed be considered as such. And as you imply, it is quite a unique experience to be able to see these inscriptions without an intervening piece of Plexiglas, and actually be able to reach out and put your finger on a piece of history!

John, I agree with you, Steve and Summerset about being able to touch a piece of history by reaching out and running your fingers over the etchings. It's nice sometimes to see history in a natural setting and not in a museum.
This was another great hike through a picturesque setting, and that sunset capping off your day was spectacular!
Also, if I was going to pick an origin for the name of this peak I prefer the one about the dog!
Thanks for allowing me to travel along with you to another fine destination.

The folks who did the etchings in the quartzite rock on Mt. Cube would likely be astounded that nearly a century later there would be folks like us who are talking about their work using a form of communication (electronic media) which could never have been imagined in their wildest dreams.

I must say that at least their etchings have survived over time, whereas the electrons used to produce these thoughts will eventually ‘evaporate’ into thin air! :-)

Thanks Chance for your kind words, and for taking time to post a reply! Much appreciated!