If you're a football fan, then you're likely familiar with a segment on ESPN where a play or player's action causes the commentator to scratch their head and say "C'Mon Man"!

I'll be the first to admit to being wrong, but my perception is that a trek to Mt. Pemigewasset generates minimal enthusiasm among seasoned hikers who generally prefer more aggressive adventures.   And so, I'm thinking that when many folks see the destination for this hike, they might scratch their head and say "C'mon Man"!

Although my adventure did include a hike to the summit of Mt. Pemigewasset, my main goal was to bushwhack to a small ledge tucked in the woods about a tenth of a mile below the east face of this mountain.  My inspiration for this hike was generated by one of Steve Smith's Blog reports (Click HERE.)

To reach this little ledge, I left the Mt. Pemigewasset Trail at about 2,300 feet and bushwhacked nearly due south.  Luck was with me.  I arrived at the top of the ledge, rather than at the bottom, which sometimes happens when bushwhacking, with just the slightest misjudgment!

The elapsed time from leaving the trail to arrival at the ledge was under 30 minutes.  However, the reverse time from the ledge back to the trail was under 15 minutes, thanks to one of the joys of winter bushwhacking!  You can simply follow your tracks back to your starting point without the time-consuming process of route finding.

Although this ledge is small, it provides big views of mountains in the Franconia Range.  In contrast, views of these mountains from the top of Mt. Pemigewasset are partially blocked by trees.  The composite photo shown below serves to compare the view of the Franconia Range from the "bushwhack ledge", versus the view from Mt. Pemigewasset's summit. 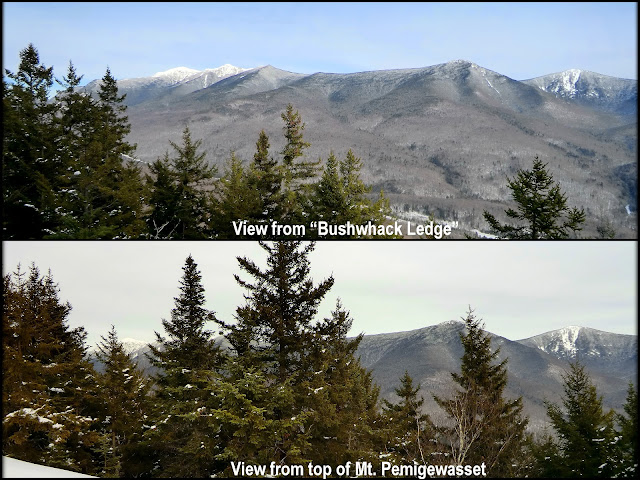 View of Franconia Range from "bushwhack ledge", versus view from top of Mt. Pemigewasset

The next two snapshots were taken from the "bushwhack ledge", and are intended merely to highlight the fine views from this spot.  Perhaps it should be noted that my trek was done on 26-December-2012.  On the day following this hike, there was a significant snowfall.  Therefore, the photos in this report show far less white on the mountains than currently exists. 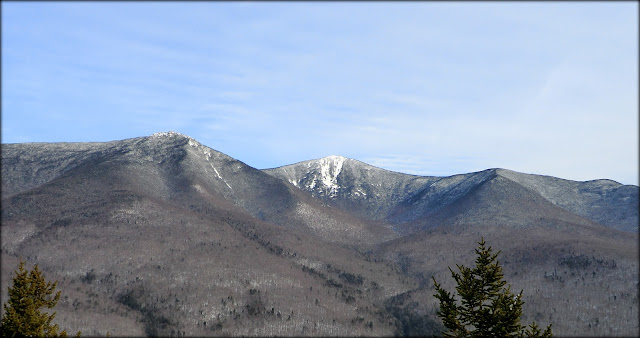 Mt. Liberty and Mt. Flume as viewed from "bushwhack ledge" 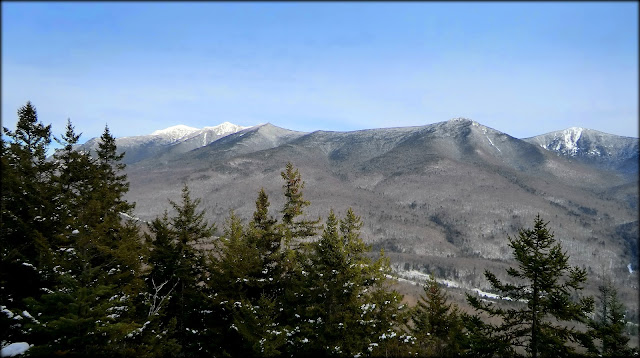 After visiting the "bushwhack ledge", I continued up the Mt. Pemigewasset Trail to the top of the mountain.  From there, I saw vistas that are familiar to anyone who has visited this location.  The following snapshots show some typical scenes.
(In the short span of time between visiting the "bushwhack ledge" and my arrival at the top of Mt. Pemigewasset, the sky had changed from blue to gray!) 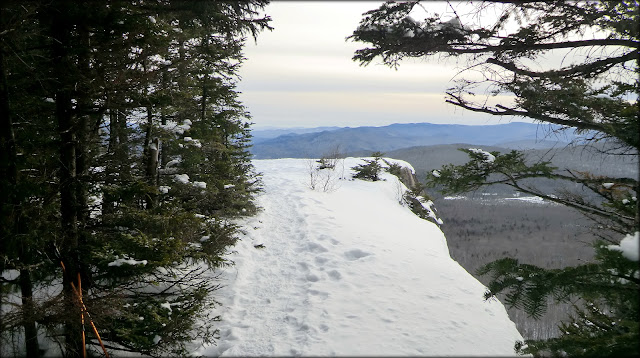 Point of arrival at the top of Mt. Pemigewasset 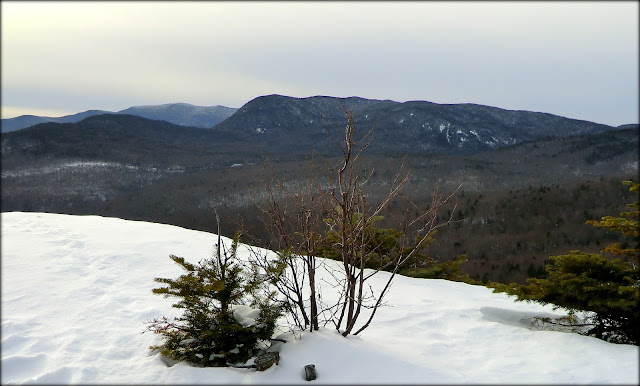 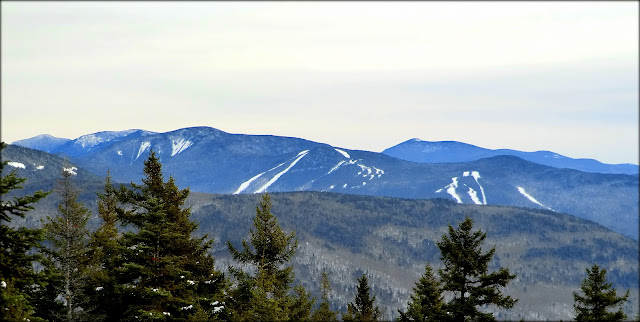 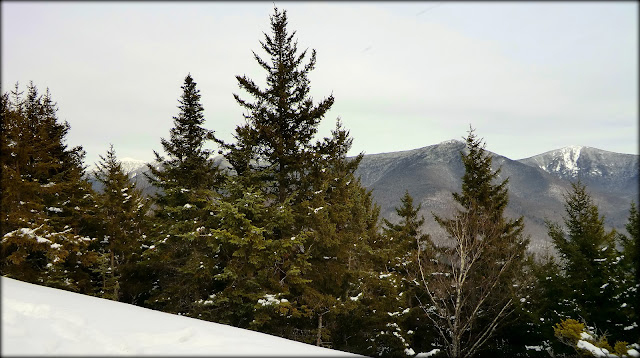 Some readers might find the next composite photo to be of interest.  It shows a highly-zoomed view of the "bushwhack ledge" as seen from the parking lot for the Flume Visitor Center.  And, this composite also contains a topographic map which shows the approximate location of the ledge. 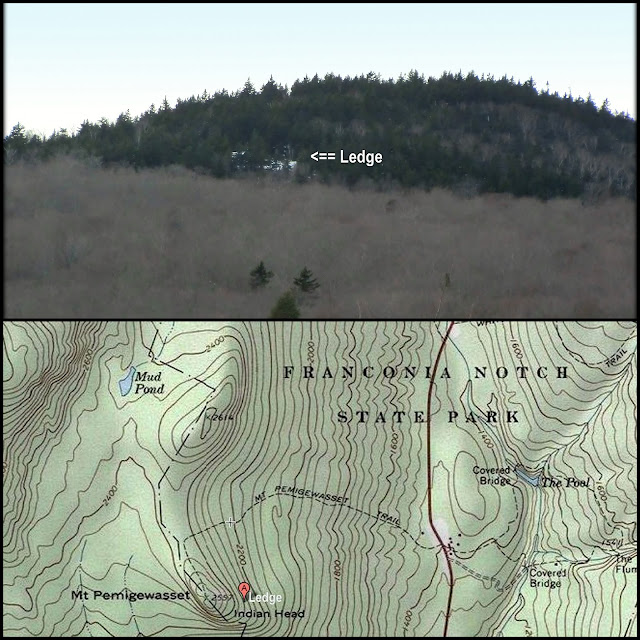 To sum it up, this little adventure was fun, and it was rewarding for me to witness the view of the Franconia Range from the "bushwhack ledge".  However, it's completely understandable that many might still just scratch their head and say "C'mon Man"!
Posted by 1HappyHiker at 12:39 PM

Mt. Pemi is lovely, John. Thanks, Man, for sharing your report and pics. :)

I had a nice hike up it on Seek the Peak day, July 21. Hadn't the time for a 4000-footer that day, so I did this one, and I really enjoyed the views from the summit areas. Wish I'd known about this nice ledge that day. Next time I can, thanks to your generously sharing good intel on its location.

Thanks again for sharing the tale of your trek.

Chris. . . thanks for your kind comments!

Hope you get the opportunity sometime to do an off-trail adventure to that little ledge. I was made aware of this spot through Steve's generosity of sharing his experience in his Blog.
So, what goes around, comes around! :-)

Mt. Pemi is a fine destination - there are all sorts of objectives and tastes among hikers! If we were all peakbaggers and gridiots, it would be a pretty boring place. We need the variety and the awareness of the beauty of all sorts of places, high peaks or not.

That said, I was out that day, "across the road" from you on Liberty. I was probably done by the time you started, because the skies were still blue when I left Franconia Notch, but by the time I got home about an hour later, the skies were thickening up with clouds. It was interesting how quickly the weather changed.

Yes, you have complete agreement from me about the “beauty of all sorts of places, high peaks or not”.

Like you, I had plenty of blue sky at the beginning of my hike (as seen in a couple of my photos from the “bushwhack ledge”). However, between the time I left the "bushwhack ledge" and my arrival on the summit of Mt. Pemigewasset, the sky had started to become overcast.

I got to looking at my last photo on my Liberty post, are those white spots on the slope above and to the west of I-93 the bushwhack ledges? Between your zoomed photo from the Flume parking and my photo from across the ridge on Liberty, that seems like it might be the right place.

Ohhh! You are so close, but those are not the ledges that I visited on this particular adventure. The ledges that show up in your photo are located on a bump just a bit north of Mt. Pemigewasset.

But further regarding those ledges that show up in your photo, I visited them several years ago. If you’re interested, shown below is a link to my report about that adventure.
http://www.vftt.org/forums/showthread.php?26567-A-Whack-to-Mount-Pemi-gee-whats-it-(29-Nov-2008)

Thank you for your follow-up reply, and thank you for prompting me to take another look at the photos in your recent Blog report (http://nh48.wordpress.com/).

Hmm. Yep, seemed like those spots in my photo were too large of an exposed area and a little too far north, compared to what was in yours. I'm not surprised you visited those other ledges, either, since you like those sorts of neat little viewing spots! Glad to know what I was actually looking at in the photo, though, thanks!

I like the fact that you're always looking for a place with the best views, even when (especially when) that effort involves straying from the main trail!

Congratulations on finally receiving a significant snowfall—looking forward to future blog posts and to seeing the NH mountains cloaked in white!

YES! Significant snow has finally arrived in northern NH. Here’s hoping it stays around for many weeks to come, and that there might even be several more inches that come our way from time to time throughout the winter season!

I'm actually planning a visit to this mountain this weekend since it's supposed to be gorgeous, but I'm bringing along a first time hiker. How bad do you think the snow is? I was planning on just using a pair of hiking boots, not snow shoes. Also, will the snowy conditions make the summit ledge a bit dicey to walk around? Thanks!

Ryan, I wish I could be more helpful, but it is so difficult to predict what the trail conditions might be on the day of your hike. Weather in the mountains changes daily, and oftentimes hourly! For safety, and to fully enjoy your hiking experience, you and other members of your hiking team should bring some sort of foot traction, even if it is only light traction such as Microspikes, Stabilicers, etc.

You might already be aware of the websites listed below. But if not, then you might want to check these websites for the most recent trail condition reports in the areas where you plan to hike.