Since I had some things to do in Littleton on 29-November, there was no time for doing a big hike.   However, there was time for a couple of small local hikes.

Rather than take the direct route from Bethlehem to Littleton, I took a side trip to Franconia along the way.  Here, I stopped at Coffin Pond which is a lovely piece of public land.  Shown below are two snapshots taken of mountains in the Franconia Range as viewed from the shoreline of frozen Coffin Pond. 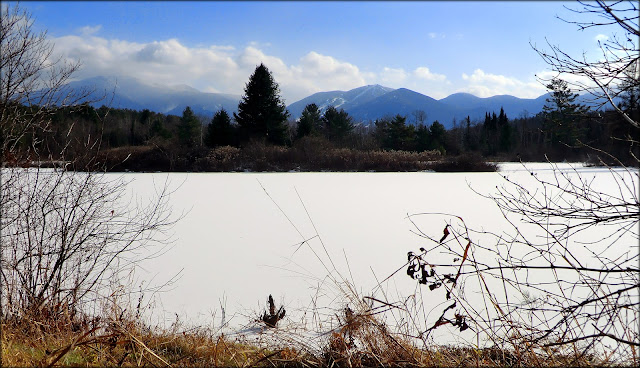 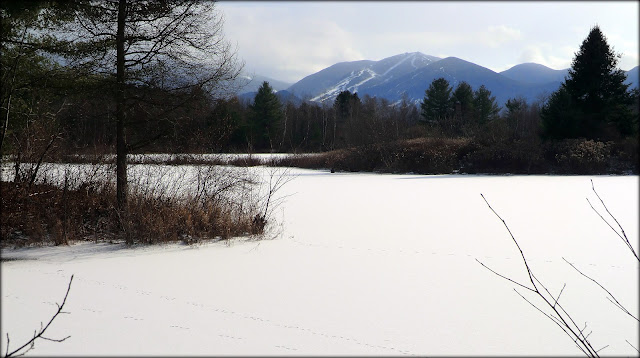 Before leaving Franconia, I made one more stop at a spot along the Gale River where I took the snapshots shown below. 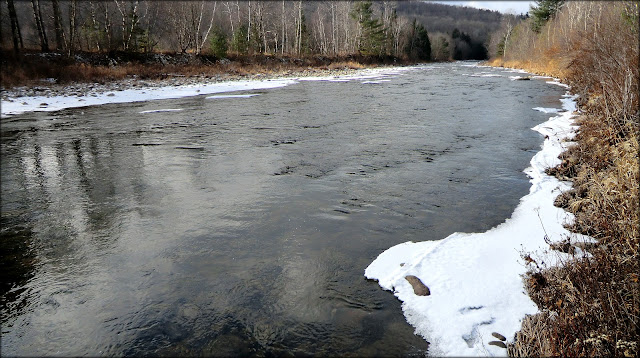 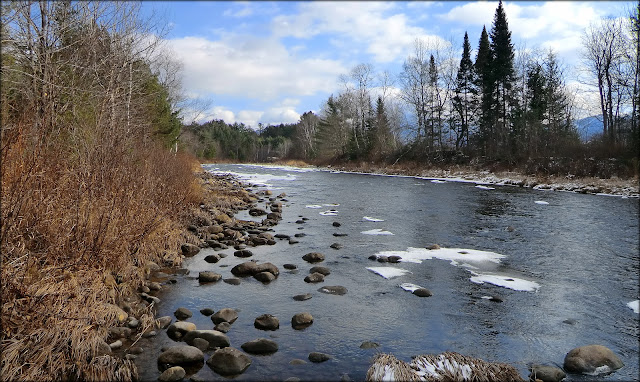 After finishing up my business in Littleton, I walked some of the pathways in the Pine Hill Trail system which is most easily accessed from Remich Park, located just a few blocks from downtown Littleton at the junction of Oak Hill Avenue and Pine Hill Road.

Shown below is a map of the trail system.  The route that I followed is highlighted in yellow. 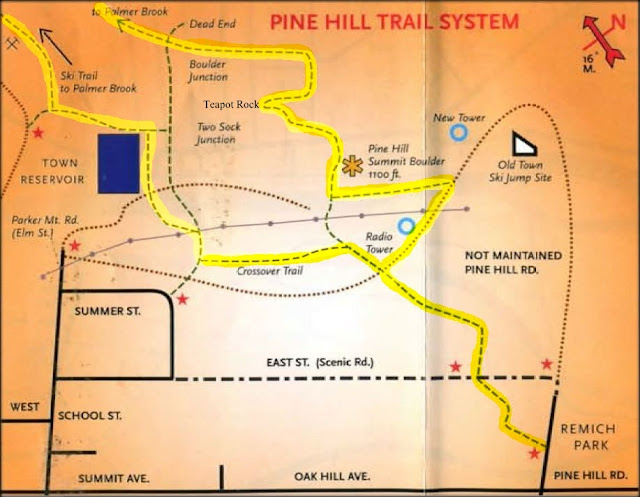 This trail system is very well maintained by Bill Nichols and his crew.  Also, the trails are very well signed.  Shown below are just a few of the many trail signs. 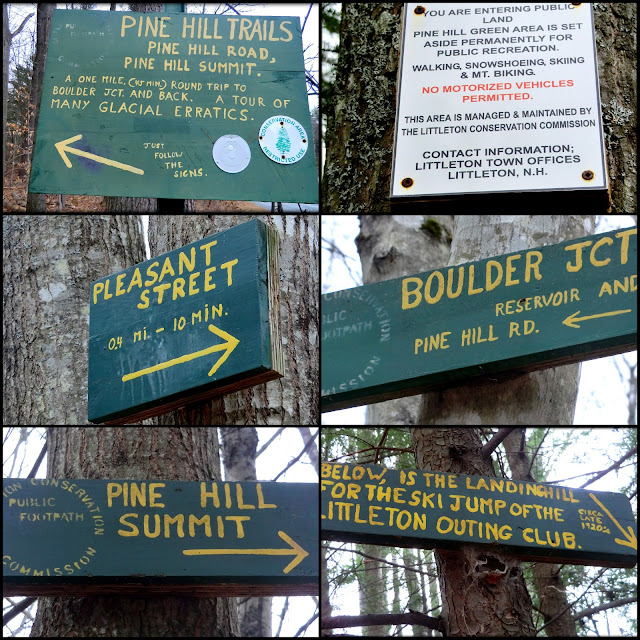 Oh!  And when there isn't a trail, there is a sign to tell you this! (The sign in the next photo is suspended by a cable stretched across the "Not A Trail" corridor.) 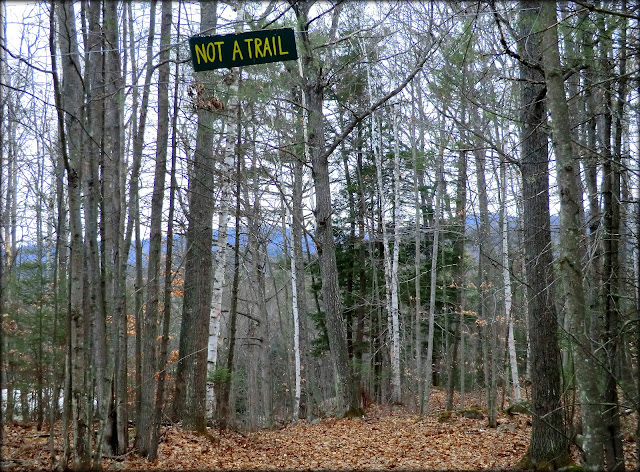 And regarding blazing, recycling and quaintness are intermixed by using metal pull-top can lids to mark the trails (next photo). 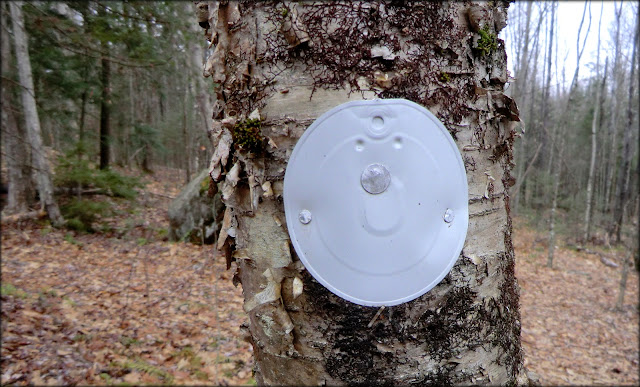 I did a loop hike which involved following signs to Palmer Brook, and a Ski Trail to Elm Street (next photo). 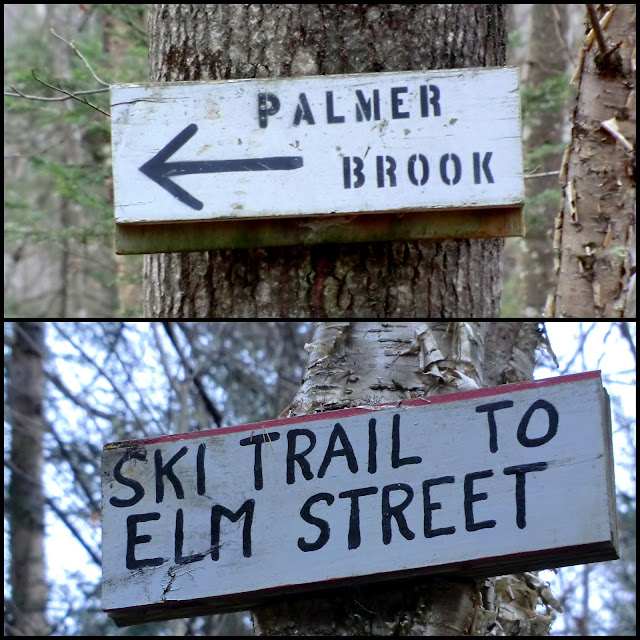 Palmer Brook is small, but picturesque (see photo below). 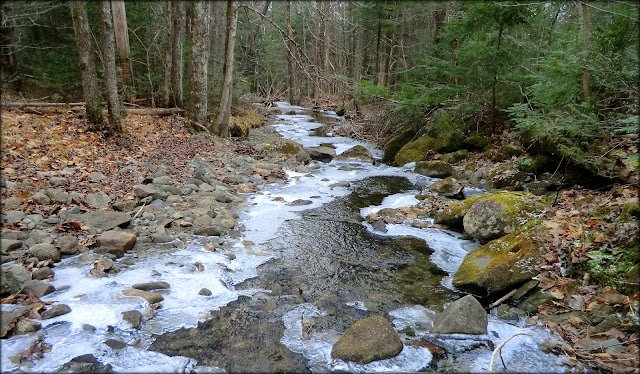 Another spot along my route was Teapot Rock, the site of an early 1900 logging camp (see photo below). 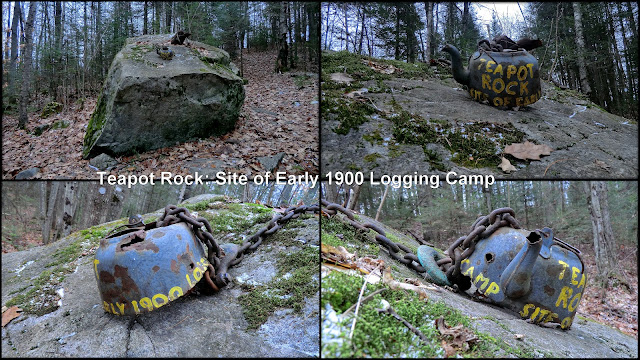 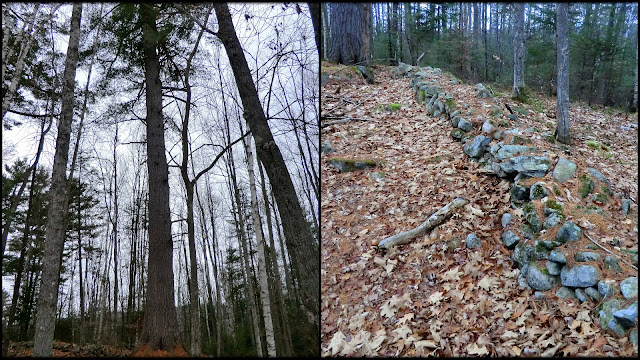 To sum it up, although my two hikes for the day were small, they were very enjoyable.   I'm grateful to have options such as these for those days when the opportunity for a longer hike is unavailable.

This additional information and photos was added in response to a question received from a reader named "Hiking Lady" (see Comments to this Blog report).  The question concerned the location of the old ski slopes on Eustis Hill (Littleton, NH) in relation to the Pine Hill Trail System.

On the map shown below, it can be seen that the old Eustis Hill Ski area is in the south part of town, and the Pine Hills Trail System is on the north side.  However, Littleton isn’t that big.  It’s very easy to get from one place to the other.  Parking for the old ski slope is available on the west side of Mt. Eustis Road (see red "P" on map below). 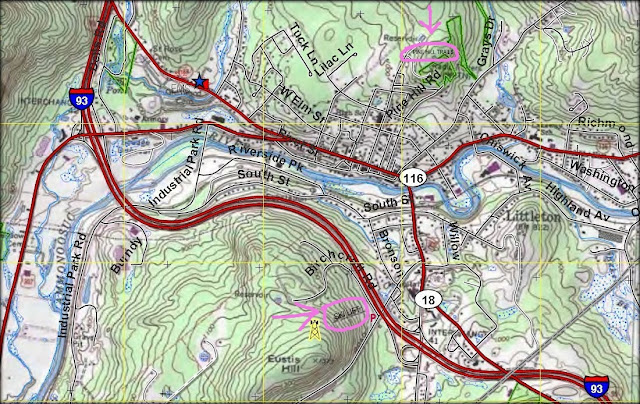 Below is a photo that I took from the Eustis Hill Ski area about a week before doing my trek on the Pine Hill Trails.  The vista from the top of the old slopes includes a portion of downtown Littleton along with several mountain ranges on the northeast horizon. 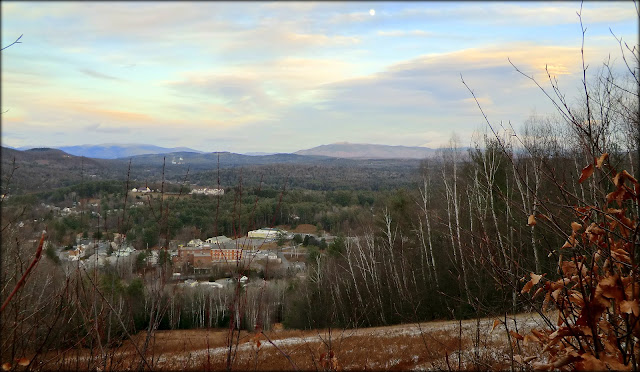 Another fine spot for a short hike while in Littleton is Kilburn Crags.  The current (as well as older editions) of AMC's White Mountain Guide contains a trail description for this hike.  The trek is only 1.8 miles (round-trip).  Views from the Crags include downtown Littleton, plus high peaks in the Presidential, Franconia-Twin, and Pilot mountain ranges.  The next photo shows a portion of this vista as seen a few years ago on a day in early April. 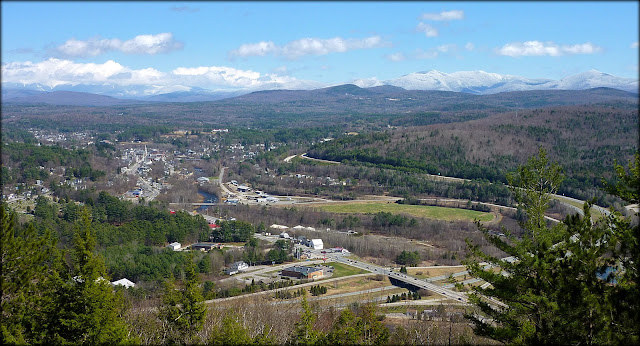 A portion of the vista available from Kilburn Crags (just outside downtown Littleton, NH)
Posted by 1HappyHiker at 11:39 PM

Very nice. I love discovering small, local trail systems. I think it says a lot about the priorities of the towns that develop and maintain them.

By the way, were you able to identify any of the tracks in your second Coffin Pond picture?

Nancy, you have a very sharp eye! I wonder how many other folks noticed the animal tracks in that photo? Regardless, my track identification skills are, shall we say, still a work in progress. So, with that caveat in mind, my best guess is that those tracks were made by an otter.

And yes, I certainly agree with you that it says a lot about those communities that opt to develop and maintain a local trail system. And of course, it also says a lot about the folks behind the scenes who so willingly donate their time and talent to maintain these trails once they are put in place.

Thanks for posting your comments!

Your photos prove that these short hikes can sometimes be quite rewarding. I love the snow-covered Coffin Pond and no, I didn't notice the tracks! It would have been great to have seen an otter (if that's whose tracks those were).

I also enjoy your pictures of the signage along the trail, especially the "Not A Trail" sign!

Thanks for another fun trip to your New Hampshire mountains!

Rita, as always, thanks for taking a moment to post your thoughts and comments,

Further regarding the “Not A Trail” sign, I also posted this snapshot on Facebook and someone asked if I had “photo-shopped” that sign into the photo! I did not, and if you were to go back and look closely at the photo, you can see the cable that is used to suspend the sign over the “Not A Trail” corridor. This quaint trail system is town-sponsored, and the gentleman who heads up the maintenance crew is very dedicated to keeping the trails in tip-top shape.

I'll have to check this out. Is this anywhere near Eustis Hill, which I read on Rocket 21's site that Eustas Hill was part of an old ski area, which I've been wanting to check out for a while, but can never justify swinging towards Littleton on my way south from Berlin when I'm up that way. Looks like a neat area, I love these little gems! Thanks for the report!

This ADDENDUM also includes a snapshot that I took from Eustis Hill about a week or so before I did my trek at Pine Hills.

And just for “good measure”, I also included information in this ADDENDUM about Kilburn Crags which is another excellent short hike in the Littleton area.

Thanks so much for posting your questions and comments!

Wow! I love your blog. Those pictures are awesome.
beneaththeelmtree.blogspot.com

I just took a look at your Blog (beneaththeelmtree.blogspot.com), and I can honestly return the accolades. I’ve added your Blog to others that I follow.