A Bushwhack to Bartlett Haystack (or Mt. Silver Spring, if you prefer)

According to the AMC's White Mountain Guide (WMG), Bartlett Haystack previously had been called Mt. Silver Spring.  As the 29th edition of the WMG puts it on page 221, this was "in the days when hazy elegance was preferred to plain and effective description."  According to the book by Robert and Mary Julyan entitled "Place Names of the White Mountains", this peak also has been called Revelation, for reasons unknown.

Bartlett Haystack sure seems like an appropriate name to me!  Not only is it located not far from Bartlett, NH, but it certainly resembles a haystack!  Take a look at the snapshot shown below and see what you think.  (This photo was taken from a pull-off area along Bear Notch Road on my way to the launch point for my bushwhack.) 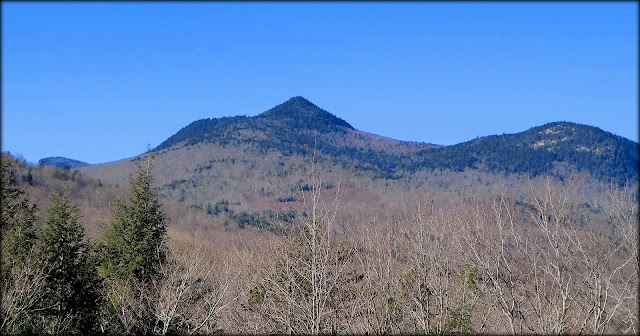 The 1940 edition of the WMG also refers to this mountain as Mt. Silver Spring, rather than Bartlett Haystack.  Shown below is a map from the 1940 guidebook.  The red-lettered text was added by me to highlight the location of Bartlett Haystack.
When looking closely at this old map, you will also note that there once was a trail leading to this peak.
(Depending on your browser, clicking on the map might enlarge it.) 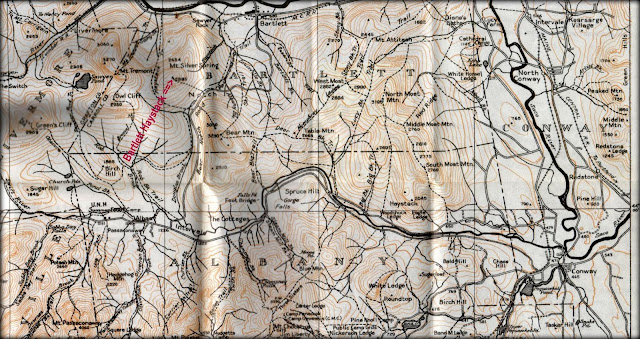 Although there is no longer any trace of the old trail, this mountain still receives visitors from recreational bushwhackers like me, and from dedicated peakbaggers who tramp there because it's on a list known as the "NH 200 Highest" (a listing of the 27 tallest mountains in New Hampshire that are under 3,000 ft elevation).  For a list of all the NH 200 Highest, click HERE.  (For a description of yet other lists of peaks to conquer in NH and New England, click HERE.)

Hikers have been going to Bartlett Haystack for at least the past 100 years to enjoy the views.  Shown below is a description of the views from this mountain which was published over a century ago in a guidebook authored by Moses Sweetser. His descriptions still hold true today, except the eastern view looking toward Bear Mountain and Mt. Chocorua is very obscured and nearly gone. 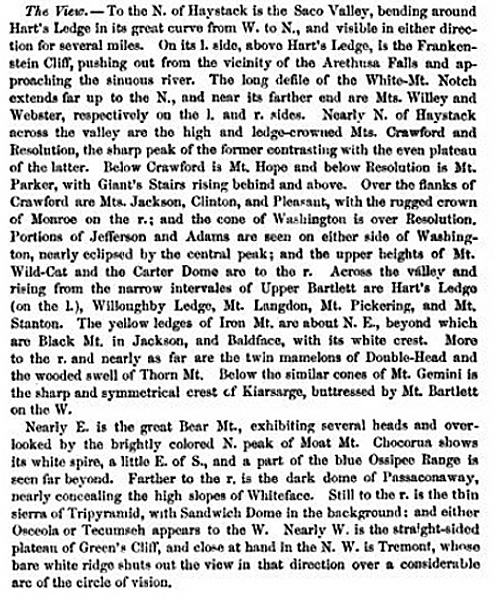 Excerpt from Moses Sweetser's guidebook published over a century ago

It had been 5 years (almost to the day) since I last visited Bartlett Haystack.  Like all my previous treks to this destination, the bushwhack was launched from the south end of FR44 where it junctions with Bear Notch road at a point about 2 miles west of the Attitash trailhead leading to Table Mountain.  The entire bushwhack is only about a mile (one-way), and is mainly through open hardwoods.

No snow or ice was encountered at any point along the way during this trek.  Although it was great to hike on bare ground, it would have been nice if there had been even a hint of snow that was visible on the surrounding higher peaks.  November is sort of a drab month for color.  Having some snow-covered peaks helps to add interest to the overall scene, at least in my opinion. 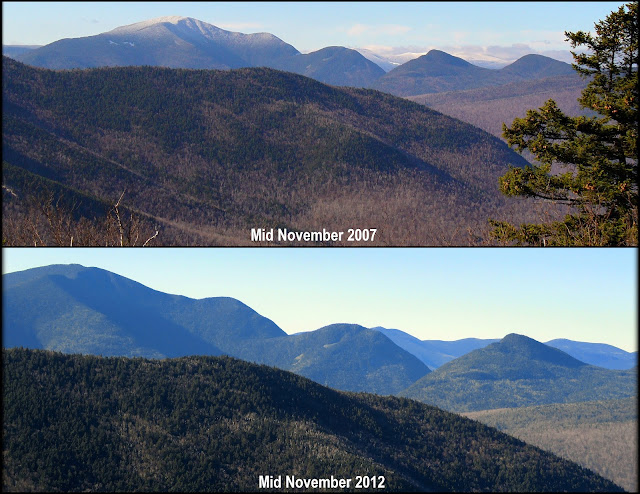 Also, here is another photo taken on my 2007 hike to Bartlett Haystack.  This one is looking up the Crawford Notch where snow can be seen on the peaks in the Willey Mountain Range. 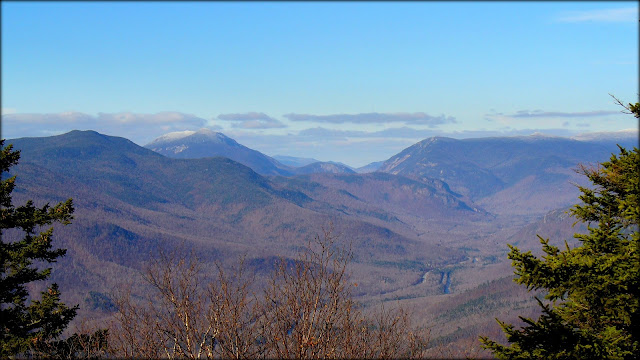 The next series of snapshots were all taken during my 2012 trek to Bartlett Haystack.  The first photo is an overview of the northward view looking up the Crawford Notch. 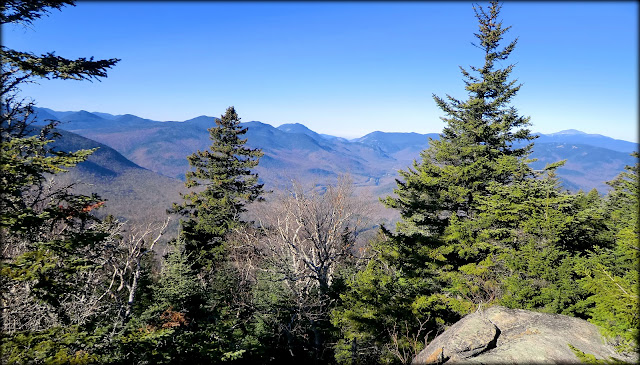 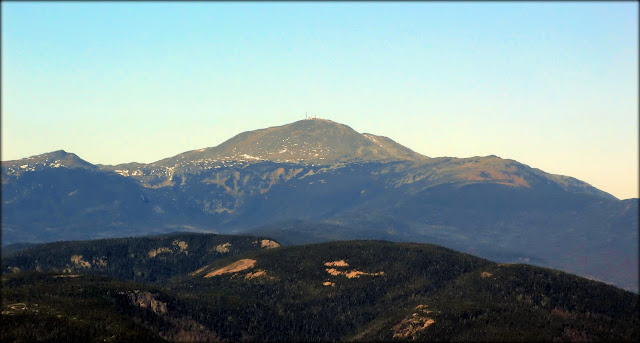 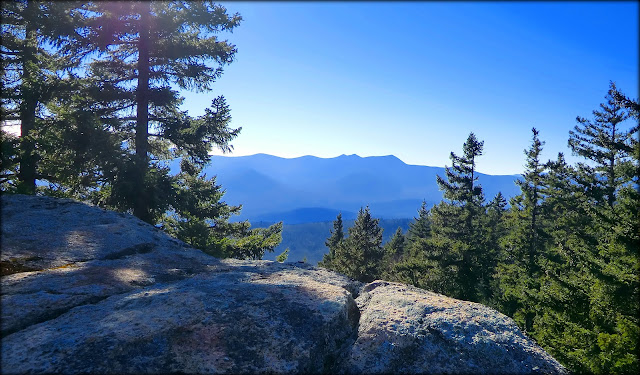 View of Tripyramids from Bartlett Haystack (photo taken in Nov. 2012) 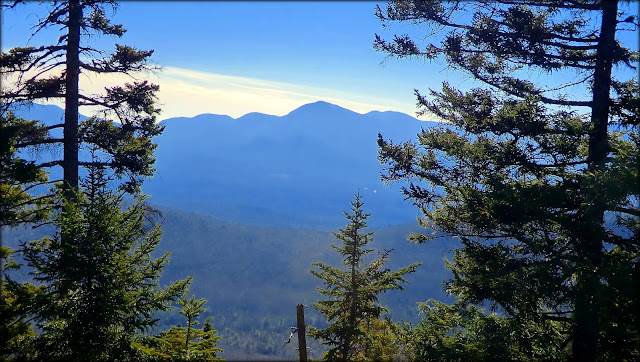 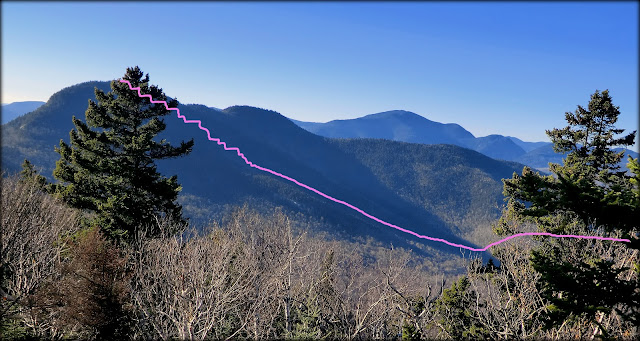 Subsequent to doing this hike, I've also bushwhacked to other ledges along the ridgeline extending northward from Bartlett Haystack's main summit.

Click HERE for my report of a trek to ledges at the northern end of the ridge.

Click HERE for my report of a trek to ledges in the middle of the ridge.
Posted by 1HappyHiker at 5:50 PM

Excellent report and photos, John! Nice touches with the old map, Sweetser view description, and comparison photos. Haven't been up there in many years. I remember the view ledge was rather prow-like.

Thanks for the accolades Steve!

Yes, the view ledge is “prow-like”, just as you recall it being. Speaking of which, I’m now kicking myself for not taking the bit of extra time to work my way down to the base of the ledge to get a snapshot looking upward at the ledge. The thought crossed my mind when I was there, but I was well into my descent before I thought about it again! Oh well, all the more reason to make a return visit at some point. Maybe I won’t let 5 years go by this time before going back there! :-)

You're right, John; snow adds interest to the browns of November. Perhaps snow in November is not as common as it used to be?
The unzoomed view of the Crawford Notch area highlights the seemingly endless mountains in your part of the world. Nice!
Looks like you had another gorgeous day for a hike.

Happy Thanksgiving to you and your family.

Rita, best wishes to you and Tim for a Happy Thanksgiving!

Regarding snow in November not being a common as it used to be, things certainly seem to be trending in that direction! It’s an unpleasant sight, in my opinion, to have the “browns of November” extending into December!