A few days ago I did a trek that included Mt. Wolf (Kinsman Range) and Gordon Pond.  This trek is probably of little interest to most readers, and is on the outer fringes of even being worthy of a Blog report.  And therefore, one might legitimately ask, you did this hike because . . .??

As frequent readers of my Blog know, I'm currently on a personal campaign to try to do something new on each of my hikes.  The "new" component can be things such as a trail, a destination, or even something as simple as a direction of travel that is new and different for me.

And so, with this rather simplistic goal in mind, my rationale for doing this particular hike was because I had never visited Gordon Pond, nor had I ever hiked the Kinsman Ridge Trail (KRT) segment of the Appalachian Trail that runs between the Beaver Brook trailhead and Mt. Wolf.  On previous hikes, I had traversed all the other pieces of the KRT, but not this one!

From the outset, I was fully aware that this particular "out & back " trek would involve a roller coaster ride of PUDs (pointless ups & downs), and that they would need to be navigated in both the outbound and inbound legs of this adventure.  Although there indeed were a lot of PUDs, overall I didn't think they were overly terrible.

On the way to Gordon Pond, the Kinsman Ridge Trail weaves its way though a forest that I found to be attractive, but others might be of a different opinion.  In terms of trailside views, there is only one overlook (located about 2.4 miles from the Beaver Brook trailhead), and it provides a somewhat restricted view of some of the high peaks in the Franconia Range (next photo). 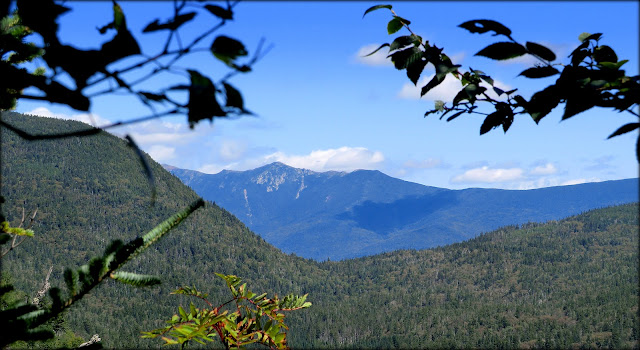 After trekking another 0.9 mile northward from the overlook, I arrived at the junction where the well-signed Gordon Pond Trail takes off to the east.  While merrily heading down the trail toward Gordon Pond, I suddenly realized that I must have completely blown past the little spur path that takes you to the pond!  I backtracked and discovered that as you are headed eastward, the spur trail is accessed via an abrupt left turn which is partially obscured by a large boulder.  I'd like to think that it's an easy mistake to make! :-)

So, upon finally arriving at the shoreline of Gordon Pond, I was immediately impressed with its beauty, and its remoteness!   It is in the "middle of nowhere", and there is a near zero chance that any condos or cabins will ever dot its shoreline!  The next snapshot shows Gordon Pond as viewed from its south shore and is looking northward toward Mt. Wolf. 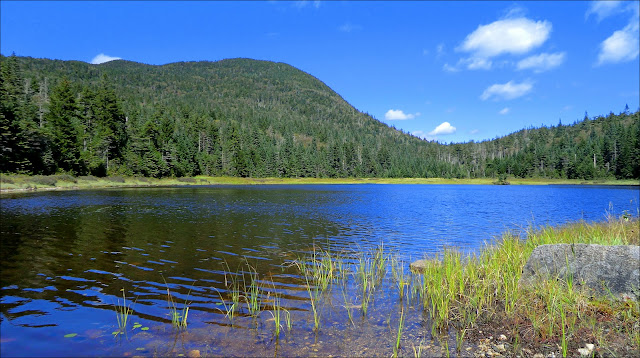 Gordon Pond as viewed from its south shore and looking northward toward Mt. Wolf

I took some time to meander around a large portion of Gordon Pond.  I saw very little in the way of wildlife.  There were dragonflies flitting about, and one duck took flight while I was there.  Although there were plenty of moose prints around the pond, I saw no moose.  Nor did I see or hear any fish jumping.  It's unknown to me if there even any fish in this pond.  Perhaps a reader might know the answer.

After a leisurely visit to Gordon Pond, I made the short trek back to the Kinsman Ridge Trail and continued northward toward Mt. Wolf.  Along the way, I did a mini-bushwhack to get a bird's eye view of Gordon Pond.  The first snapshot is highly-zoomed.  The second snapshot is an un-zoomed overview of the pond and surrounding area. 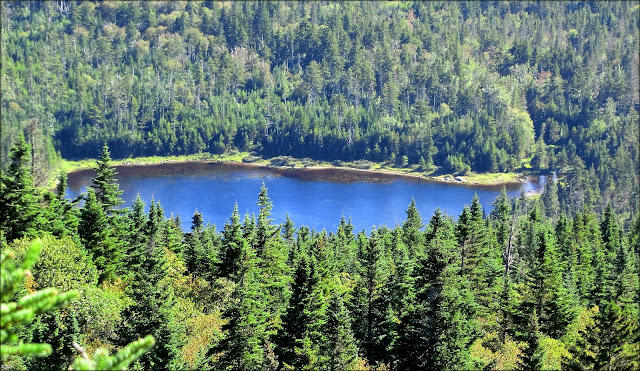 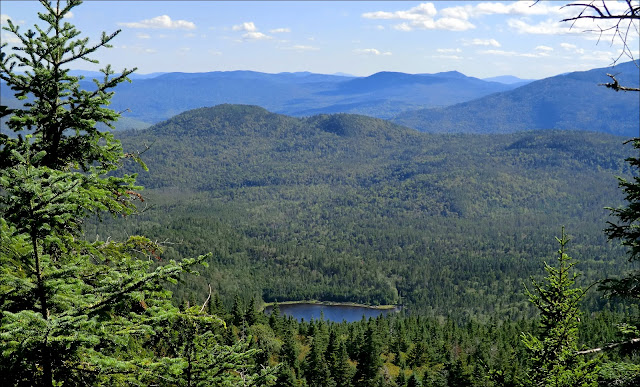 After my mini-bushwhack to look downward at Gordon Pond, I headed to the short spur trail located near Mt. Wolf's summit.  This spur leads to an overlook which provides a nice view of the Franconia Range, as well as other peaks to the east and southeast. 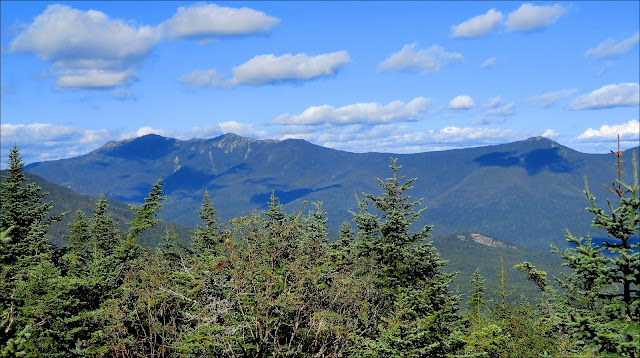 Mt. Wolf was the terminus of this particular hike.  After spending some time chatting with a couple of Appalachian Trail thru-hikers, I left the outlook and headed back down the trail.  Along the way, I once again stopped at the trailside overlook which is located about 0.9 mile south of the Gordon Pond Trail junction.  From here, I took a snapshot of Mts. Liberty and Flume as the shadows of early evening were stretching across the lower portions of these shapely mountains. 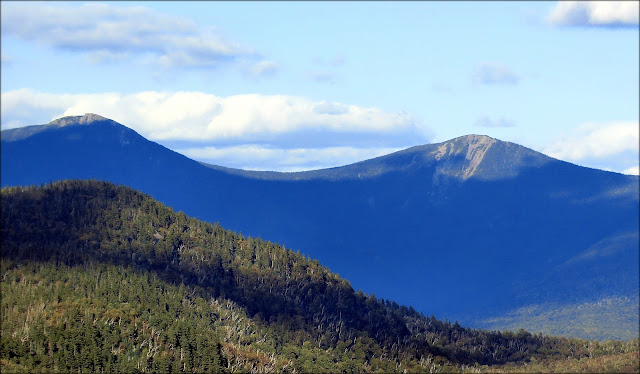 Slightly zoomed photo of Mts. Liberty and Flume with shadows of early evening

Also visible from this overlook was the town of Lincoln, as it lay nestled at the foot of the Loon Mountain ski area. 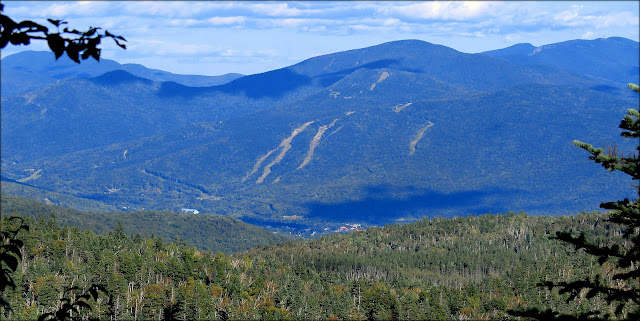 As I approached the trailhead, the setting sun was illuminating the leaves of the hobblebush which are just now starting to slip into their autumn attire. 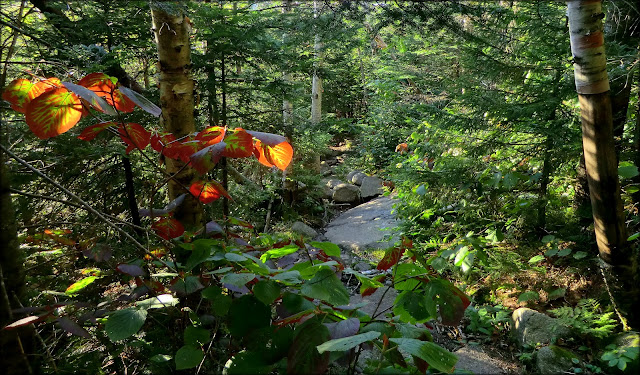 Hobblebush being illuminated by the setting sun

Most readers will likely be familiar with the area in which this hike occurred.  But perhaps the map shown below will be of some use in reviewing the route taken for this trek of about 9.8 miles (round-trip).
(Depending on your browser, clicking on the map might enlarge it.) 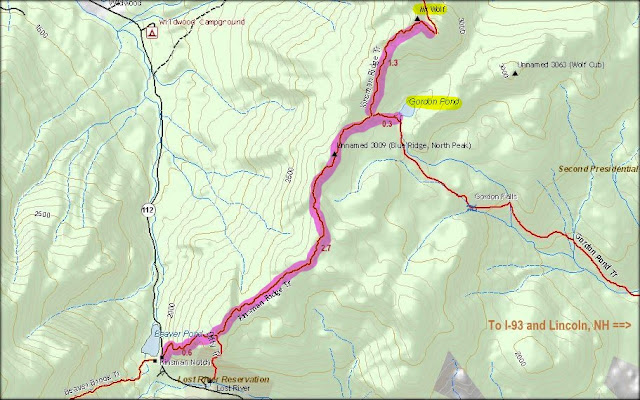 Map showing the route taken for this trek

To sum it up, this trek won't go down in history as an epic adventure, but it certainly had its joys.  I have no regrets for taking the time to finally visit Gordon Pond, and it was a personal triumph to finish hiking the entire length of the Kinsman Ridge Trail.
Posted by 1HappyHiker at 10:45 AM

Thanks Steve for the congrats regarding finishing the Kinsman Ridge Trail, and also thank you for your kind words about the report overall.

And yes, I completely agree with your thoughts about the Gordon Pond/Mt. Wolf area. Although this isn’t an officially designated “wilderness area”, it surely does have a really wild feeling.

It’s interesting that your first two hikes in the early 70s included Gordon Pond and Mt. Wolf! That being the case, it’s easy to understand how you got hooked on hiking!

Thanks for this report John!
I often enjoy a theoretical journey while looking at a map while sitting on my couch. Gordon Pond was such a destination last week as I was exploring my curiosity of the same for me under-explored area. Good to see the pictures of the pond and get a feel for what to expect.

I was intrigued by the possibility of a loop to also include the Gordond Pond Tr with Gordon Falls, and just north off the ridge to check out Bog Pond and descend by way of Dartmouth and Georgiana Falls (maybe better in reverse).

Love your blog in that you seem to have many of the same trips in mind as me- so I usually get some clues and tips before going to a place in my plans.

I appreciate your kind words about my Blog, and it’s great to read that you can sometimes get some tips and clues from my reports.

As I stated in my report, this was my first visit to Gordon Pond, and I was truly impressed with it! And, unlike many ponds and lakes in the Whites, there are actually places to sit and enjoy the pond, and you can easily meander around large portions of the shoreline.

Regarding your proposed loop hike, that sounds very interesting! I’ve never done it and so what I’m about to say is only theoretical. I have done some winter bushwhacking in the Bog Pond area, and as the name of the pond implies, that area is very boggy! Therefore, if you plan to do this trek in warm-weather months, then you might need to take a route which is a good distance south of Bog Pond. You might have already done this, but if not, then you might want to consider dropping by the Mountain Wanderer Bookstore in Lincoln and talk with Steve Smith about your loop. He might have done it, or if not, I feel certain he could provide some expert guidance and tips.

Thanks again Andrew for taking time to post your comments!
John

Late to the party, as usual. Nice hike and it doesn't have to be "epic" to be enjoyable and fun. I think you had a great day, the pictures prove it. I haven't been on this portion of the KRT, either and will explore it some day. I've only done the section between South Kinsman and the Tramway lot.

We are often alike at “being late to the party”!

Whenever you do explore the segments of the KRT from South Kinsman to the trailhead near Beaver Brook, I’m certain that you’ll be delighted with the beauty and variety!

Wow, the pictures with this post are truly amazing (as is the story itself!). Have you ever thought of entering photo contests?
The illuminated "hint of autumn" showing up on the Hobblebush is spectacular!
This sounds like a fun and rewarding hike. Gordon Pond looks like a wonderful place to rest and relax for awhile. May it stay forever wild!

Yes! There’s 100% agreement from this corner of the room regarding your sentiments about Gordon Pond remaining wild forever!

Thank you so much for your very kind words about my photos! I’d like to think that they at least provide the reader with a “snapshot” view of what is available at the locations where I hike. But as far as being worthy of entry into photo contests, my photos fall short. There are many excellent White Mountain photographers who produce photos that are far superior to mine. I’m more in awe than I am envious!

Thanks again for your comments. I’m always very appreciative!