With only a few hours of "playtime", there wasn't time to come up with a new hike.  And so, I did a familiar romp in the northern end of the Zealand Valley area of New Hampshire's White Mountain National Forest.

I parked at the trailhead for the Sugarloaf Trail, and then walked directly across Zealand Road to access the grassy forest road (FR 155) which heads eastward. After walking along this road for about a mile, I arrived at the rock climbers trail on my left.  It's sometimes marked with a cairn, but not always.  My goal was to to reach some lower ledges on Mt. Oscar.  If you are unfamiliar with the name "Mt. Oscar", the Bretton Woods ski slopes are located on this mountain. (See Google Earth image at end of this report.)

Just before embarking on the rock climbers trail that leads to Mt. Oscar, I took a snapshot of the Middle and North Sugarloaf mountains. 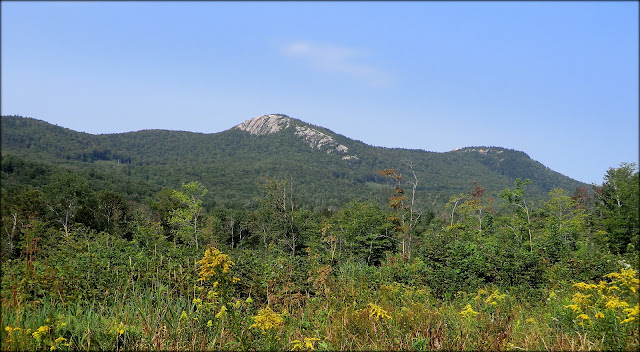 As expected, after a short trek along the rock climbers trail, I hit a wall!   Unless you're skilled at scaling a sheer cliff, you need to find another way up to the top. 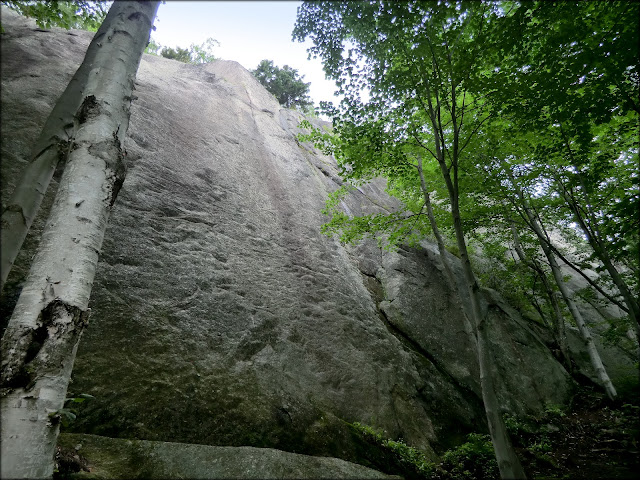 Base of cliffs on Mt. Oscar

As I've done before, I worked my way eastward along the base of the cliff and located a rather dicey route up to some lower ledges on Mt. Oscar.  With my time limitations, I just snapped a few photos, and then carefully descended via the same route as used for my ascent.  Shown below are a few of the photos taken from the lower ledges of Mt. Oscar. 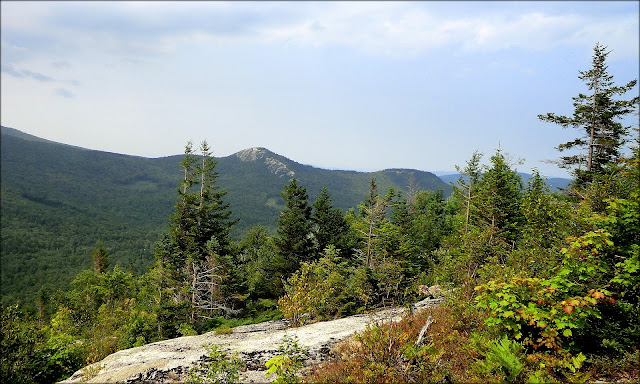 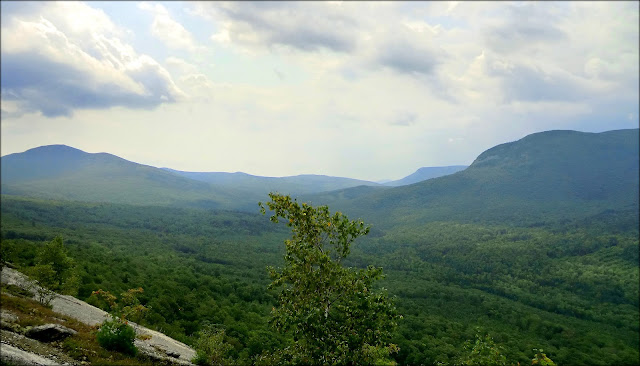 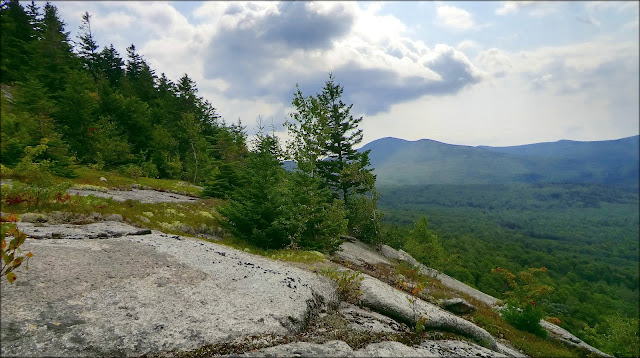 Looking across the lower ledges toward Mt. Tom

On the return leg of my Mt. Oscar trek, I took the short little trail to Wildlife Pond.  This is an official trail off of FR 155 that is marked with a sign.  Shown below is a photo taken en route to Wildlife Pond. 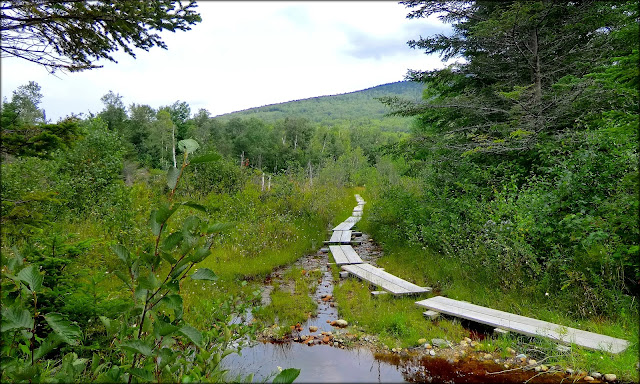 Along the way to Wildlife Pond

The next photo shows a snapshot from Wildlife Pond looking toward Mt. Hale. 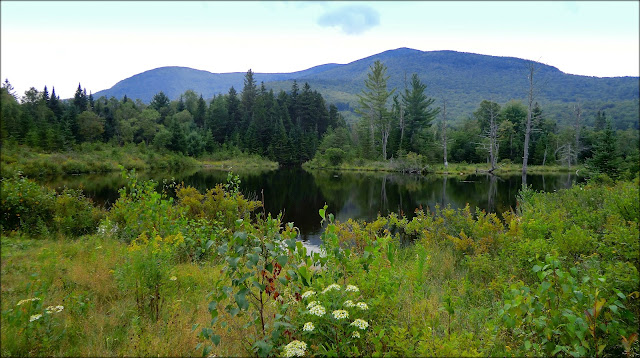 Upon leaving the Wildlife Pond, there was a view of Middle Sugarloaf as seen from the bog bridges along the trail. 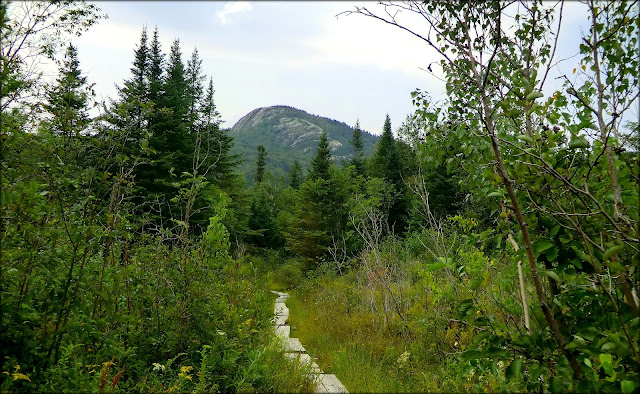 As an overview of the area where I did my hiking, perhaps the Google Earth image (shown below) will be of some help. 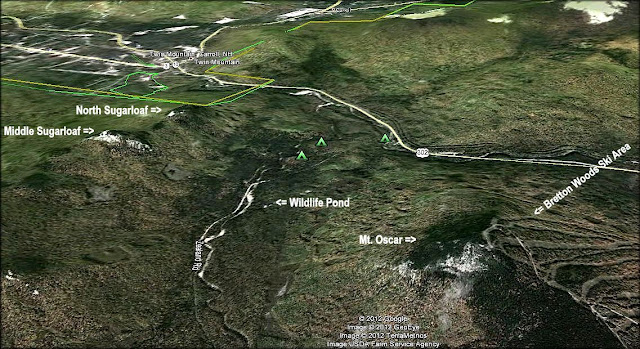 Google Earth image showing area where I did my trek

To sum it up, what can I say?  This was a brief two-hour adventure (or nearly three-hours if you count travel time to/from the trailhead from my home).  It was a hike that I've done several times before.  And as always, "short and sweet" sort of says it all! :-)
Posted by 1HappyHiker at 10:32 PM

Wow-
All that in just 2 hours-Lots of great views and a variety of trails, mini whacks and bog bridges!

Short, sweet and very pretty. Thanks for sharing this short story and your nice photos, John. :)

I think you know me well enough to appreciate that this isn’t being said in a boasting manner. It is truly remarkable what one can see and do within a very short time-span here the heart of the White Mountains.

Thank you, as always, for posting your comments.

It’s terrific to read that you appreciated my short story and the few snapshots that I took on my 2-hour trek. There is always some hesitancy to post something like this since I feel that there is probably a lack of interest in such a trivial little adventure.

Thank you for taking time to post your response. I’m very appreciative!

You're right John—it is truly amazing what one can do and see in the White Mountains in a short amount of time. I'm awed by the variety of features and "points of interest" on your hikes. On this hike I enjoyed the photo of the rock wall and the wildlife pond. The pond looks like a great place for a moose to hang out. Did you see any wildlife while you were there?

Rita, I’m not saying this just to be agreeable, but I tend to agree that the rock wall, and the Wildlife Pond photos were perhaps the most interesting ones in this particular Blog report.

You asked if I saw any wildlife at Wildlife Pond. Hmmm! Well, sort of . . . if you count the numerous butterflies and dragonflies that I saw! :-) A dismal failure would be an apt description of my attempts to photographically capture images of either the butterflies or the dragonflies!

Thank you once again for posting your comments!