The Fan: A Destination on the Huntington Ravine Trail

Sometimes it's difficult to get beyond the notion that you must follow a trail all the way to its end in order for it to be a “complete” hike. However, there are several trails where you can create your own destination without hiking the entire length of the trail.

A few days ago, my friend Marty and I decided to hike the Huntington Ravine Trail (HRT). However, rather than hiking the trail to its endpoint at the Alpine Garden Trail, our destination was “The Fan”, which is a large area of broken rock high up on the HRT. From reading the trail description, we determined that this location would provide interesting views looking up at the headwall. In addition, we felt there would be other nice views en route to our destination. But even more important, this would be a new adventure since neither of us had ever hiked the HRT.

This hike “delivered the goods” in every respect! There were picturesque scenes along the way, such as those shown in the next few photos. 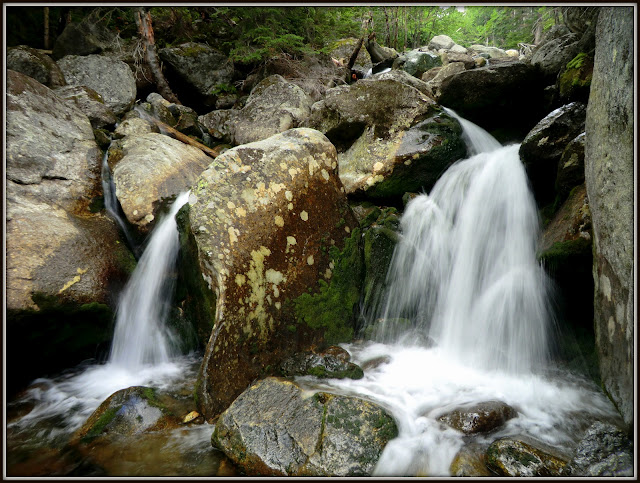 One of several cascades along the route A cascade flowing over a boulder with brilliant green-colored moss 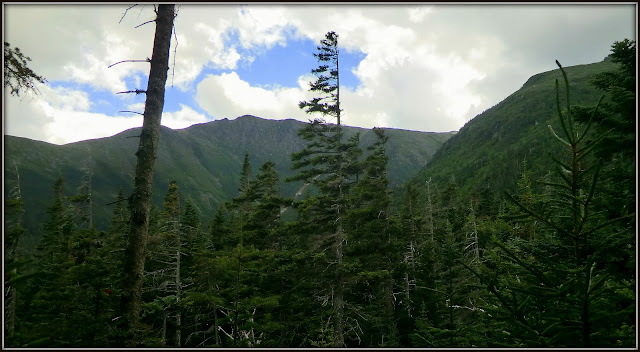 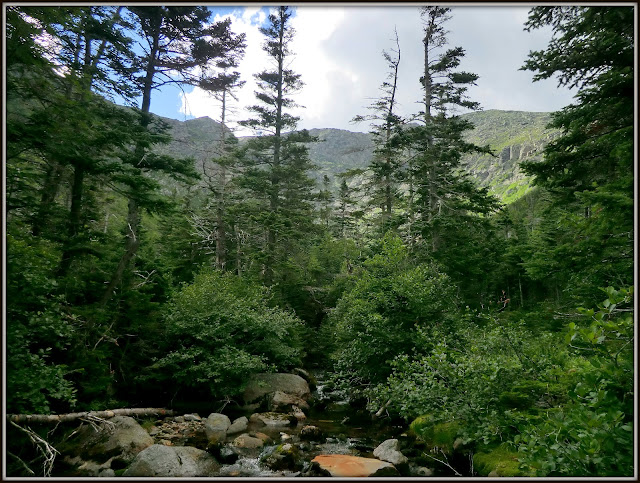 Trailside view of Huntington Ravine on the approach to “The Fan”

The route to “The Fan” was no more rugged than many other trails in the White Mountains. However, the segment of trail after “The Fan” is where conditions become much more challenging!! 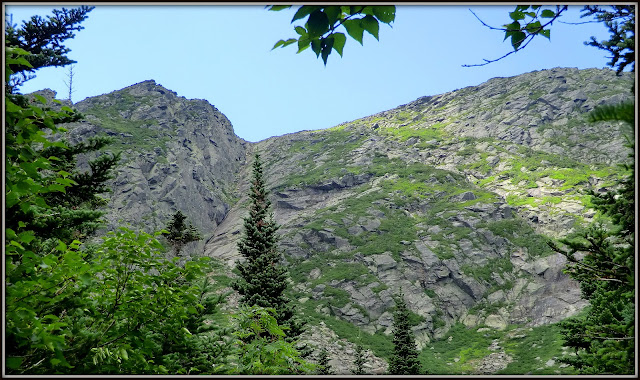 Looking up at the Huntington Ravine headwall.

Also from our lofty perch upon “The Fan” we got a nice view looking down the ravine toward Wildcat Mountain and surrounding peaks. 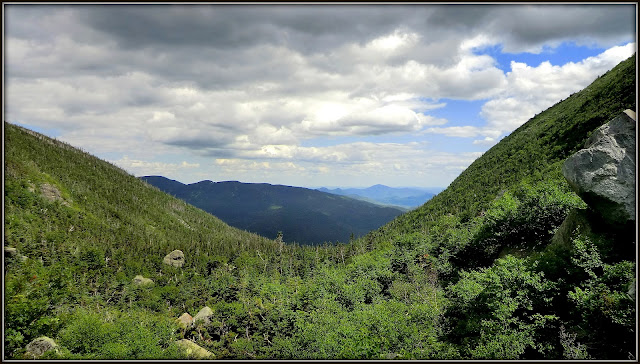 We met several hikers along the way. Some were couples, some were hiking alone, and there was one large group from Rensselaer Polytechnic Institute. We even met on father and son team who were doing the exact same thing as us, i.e. just hiking to “the Fan” as a destination.

Shown below is a zoomed photo of several groups of hikers making their way up the headwall.
(Click on photo to enlarge it.) 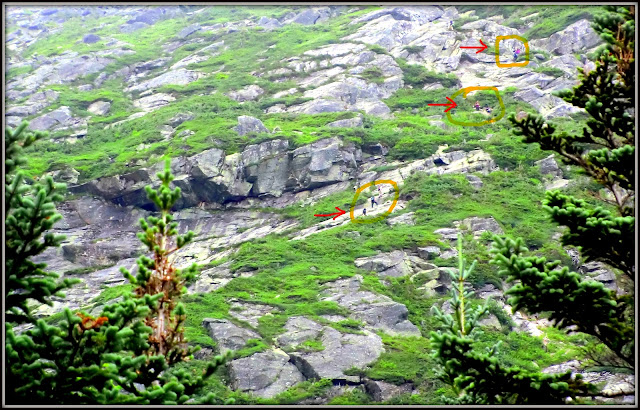 We even saw a group of rock climbers scaling a formation within the Huntington Ravine known as “The Pinnacle”. 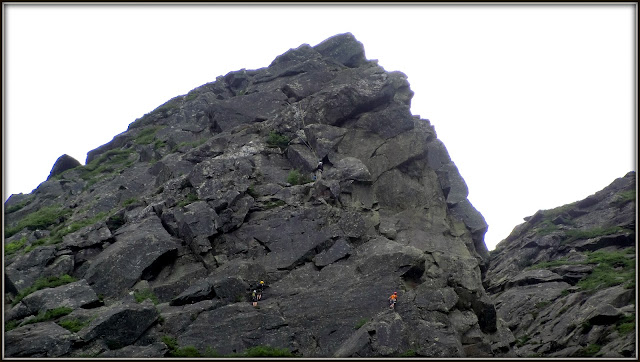 The next photo shows “The Pinnacle” (as mentioned above), as well as other named features within the Huntington Ravine, including our destination, i.e. “The Fan”. This snapshot was taken from a large sign posted at Harvard Cabin (more about that later). Obviously, this photo is a winter scene. The ravine also serves as a playground for backcountry skiers. 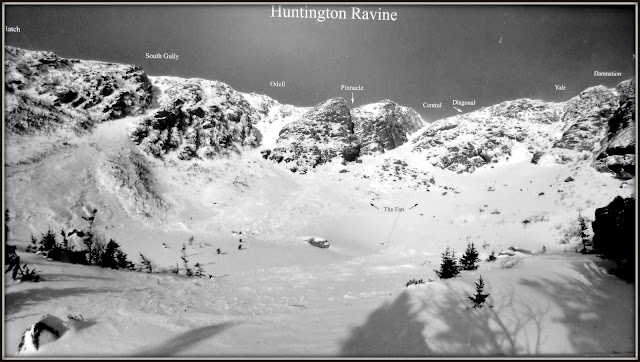 Okay, regarding the Harvard Cabin, this facility is maintained by Harvard Mountaineering Club for use by the general public. The cabin is operated under a special-use permit granted by the USDA Forest Service. Cabin space and tent-sites are available on a first-come, first-serve basis between December 1st and April 1st each year. Specific instructions for staying at the cabin can be found online (click HERE). 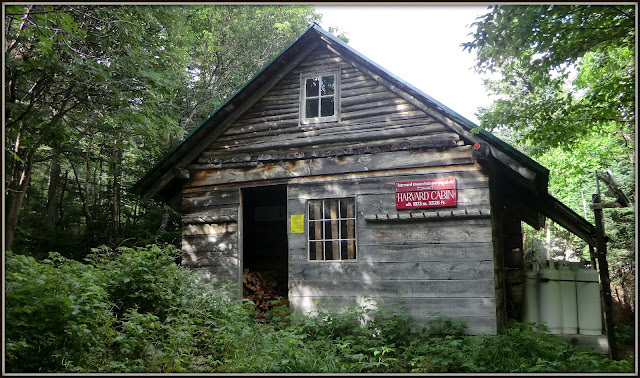 To sum it up, a change of mindset is required to purposely set forth on a hike with no intention of hiking the entire trail to its completion. However, adopting this frame of mind can produce some rewarding experiences. Marty and I thoroughly enjoyed our hiking adventure to “The Fan”. Not only was the trail new to us, but so was the destination. Experiencing new things is always great fun!

I've also become a fan of hiking to interesting endpoints and not just summits or trails, especially in the Whites. There is so much to see and explore. One hike I'm hankering to do is the bushwhack down Jumping Brook (I think its called) down the east face of Guyot below the shelter. Call me crazy.

Thank you for your comments!
And nope, I wouldn't call you crazy at all for wanting to do the trek that you described. Adventures such as that are truly fun, and broaden your experience. Go for it!

Great trip report - Huntington's has finally been placed on the bucket list - a place I'd never thought I'd go, but after the N. Tri. slide and a few other places I've been I might try it! I agree that it takes a certain mindset to only go to a certain point on the trail. It would be difficult for me - I'm far too curious to find out what is beyond the next bend or rise especially on a new-to-me trail. I realize that curiosity also killed the cat, so I do keep on eye on my comfort and safety levels!

Oh! Do I ever know what you mean about curiosity! It was an exercise in self-control to psyche myself up for this adventure. With a purposeful late-start, Marty and I greatly decreased our temptation to “go all the way” and thereby end up at the Alpine Garden Trail. However, I was (am still am) ever so curious to personally experience what lies beyond “The Fan”! Simply reading trip-reports written by others is just NOT the same as actually experiencing it yourself.

When I do hike the Huntington Ravine Trail (all the way), I'm thinking I'll descend via a route consisting of the Alpine Garden to the Nelson Crag Trail to the Old Jackson Road. I don't think I can endure the boredom of retracing my steps along the Tuckerman Ravine Trail back to the trailhead! :-)

Summerset & John: you are both so right, I kept thinking how the trail just seemed to "lure us along, just a little more...lets see what's next" and at the same time thinking about the point of no return and the long trip down. Now I wish we had started earlier. Since we hiked I've been reading past trip reports and I'll be going back to finish. Sounds like I'm not alone.

Sounds like "it's game on"!! :-)
From what I understand, hiking the trail to its completion should really be no problem if you're an experienced hiker, and if you hike the trail when conditions are dry, and have been dry for several days preceeding your hike.

Another great report from another rewarding hike. I couldn't agree more about wanting to hike a trail to its terminus. Here in the west the endpoint of a trail is likely to be a high peak or a commanding viewpoint and so it's hard to get past the notion that ANY hike can be a great hike if you take the time to note the interesting things along the way—and that's something you always do!

I think it would take another lifetime to explore the many treks you've posted about. If I ever get back to New England I'll have lots of great hikes to keep me busy!

It sounds a bit like I'm parroting back to you. Nonetheless, if I ever get out West, then I have a lot of great hikes from which to choose, based soley upon the hikes that you have posted on your Blog.
http://onedayinamerica.blogspot.com/

My wife (Cheri) and I were just fantacising today about how wonderful it would be to take an extended trip out West and explore some of the many remarkable places that you have visited and written about. Ahhh! Maybe someday!

Thanks again for taking time to post your comments.

LOL. Yes, that curiosity is what found me at the top of East Osceola one nice February day, when I was "only" going to Greeley Ponds! A purposeful late start would certainly curb some of that adventuresome spirit, so it sounds like you at least knew you might get carried away. Of course, after your report, I (like Marty) had to go out to the Net and read what hiking the whole thing up to Alpine Garden would be like! Yes, I've decided to try it some day, just need partners and a dry day, probably wouldn't go solo for this one. I agree, hiking down via Nelson Crag/Old Jackson Road would be good idea - a loop with different trails the whole way is much better than a repeat!