Unlike many of my treks, this was nothing new, but rather just a "déjà vu hike" that I've done many times in the past.  Actually, this Franconia Ridge Loop hike has been done many times by many people.  Because of the remarkable views, it's a very popular hike.  And, as a result,  there are countless trip reports and blog postings about this trek.   Okay, so here's yet another one!

This is one hike that I don't mind repeating, but only on an occasional basis.  For it to remain special, I like to do it only sparingly.  For me,  a steady diet of the "extraordinary", makes it become merely "ordinary".  Well, that's enough philosophy, and so here is my report of the trek done on 18-June-2012.

For whatever reason, I prefer to do this loop in a counterclockwise fashion, which means ascending via the Falling Waters Trail and descending via the Old Bridle Path.  This route (as well as the clockwise route) takes you on a roller coaster ride of going up and down over peaks at the northern end of the Franconia Range, i.e. Little Haystack Mountain, Mt. Lincoln, and Mt. Lafayette.

As the name implies, there is a lot of "falling water" on the Falling Waters Trail.  The photo collage below shows just a few of the watery scenes along the lower portion of this trail. (NOTE: To enlarge any photo, click on it.) 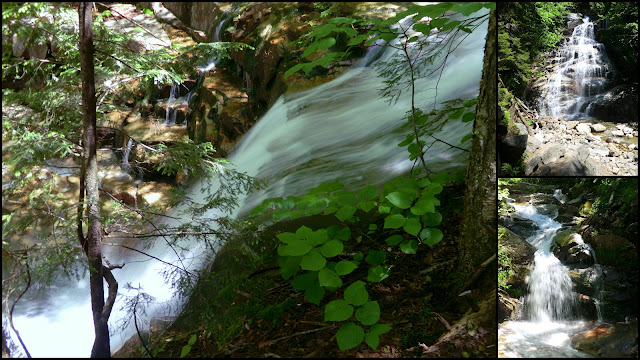 Upon reaching the top of the Franconia Ridge, I began taking the "touristy" photos that many readers have taken and seen many times over.

The first thing I did upon arrival at Little Haystack Mountain was remove my backpack and take a snapshot of Mts. Liberty and Flume, which reside at the Franconia Ridge's southern end (not where I was going today!). 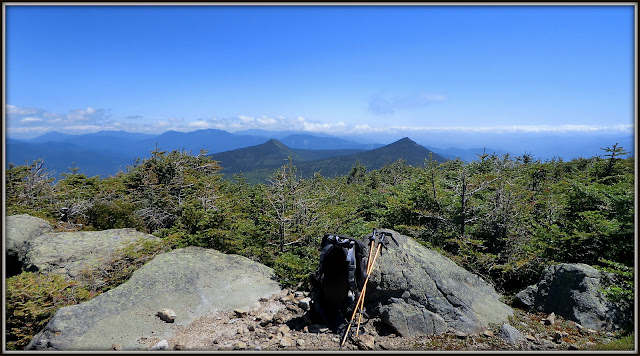 Another photo I took upon arrival was the vista that includes Owl's Head (with the famous Owl's Head Slide in the center foreground), and the Bond range (peeking over the top of Owl's Head to the photo's left side).  Here in one photo are two destinations which are among the longest and most difficult hikes to New Hampshire's 48 highest peaks. 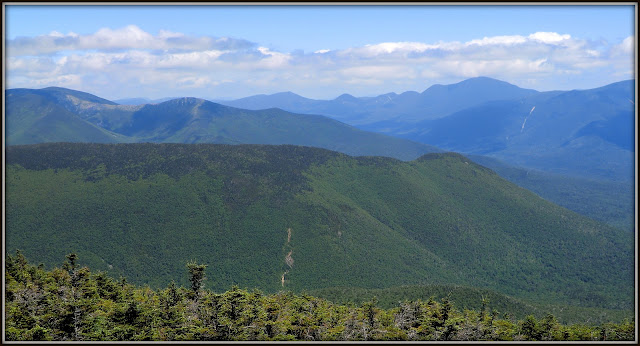 Just before descending Little Haystack, I met a Dartmouth College research team.  As I understand it, they are conducting an experiment designed to study the effects of wind-shielding on the interrelationship between diapensia and alpine bilberry.  Best wishes to the team for uncovering some interesting data! 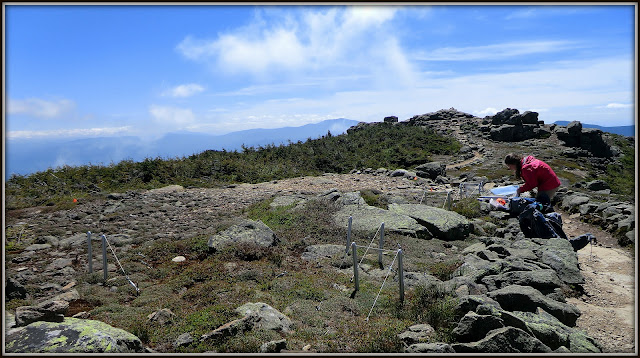 Speaking of alpine-zone wildflowers, there were a lot of little "bouquets" tucked into nooks and crannies all along the route. 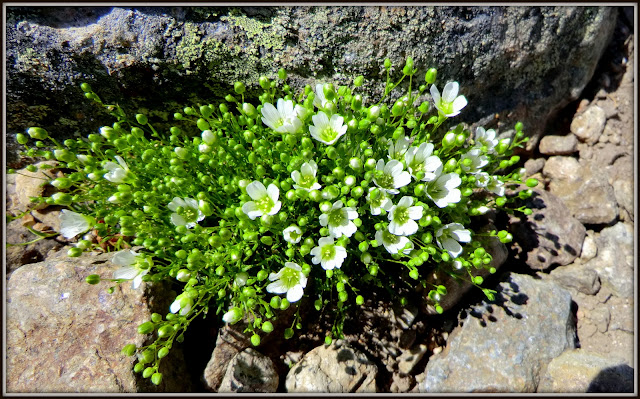 As I moved further northward along the ridgeline, I took several "ridge shots" such as the one that is shown below. 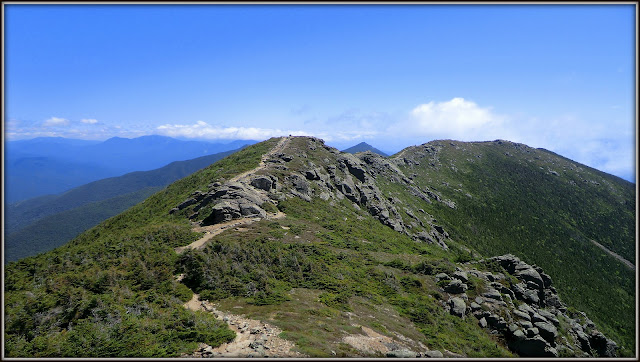 Along the way, I spotted two ravens who seemed to be enjoying the views.  Perhaps they were peak bagging.  They could probably do several peaks in one day since nothing would be very far apart "as the crow flies"! :-) 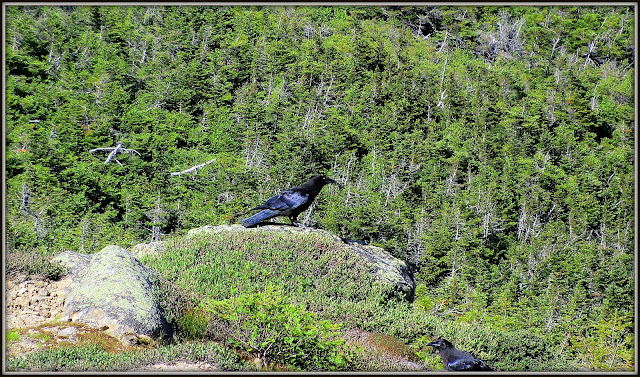 Somewhere between Mts. Lincoln and Lafayette, a bank of clouds began to move in and out, sort of like waves at the beach.  The next two photos show the clouds as they partially obscured Mt. Lafayette (1st photo), and Mt. Lincoln (2nd photo). 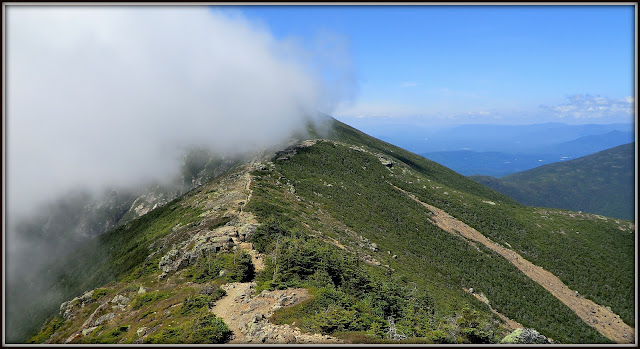 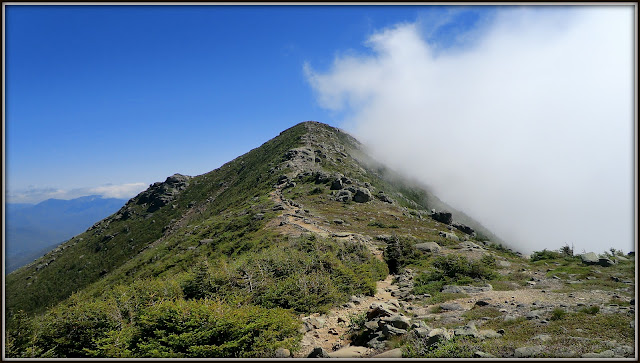 Once the "cloud wave" withdrew from Mt. Lafayette, I took a zoomed photo of hikers atop this mountain who were probably happy that the views had been re-opened. 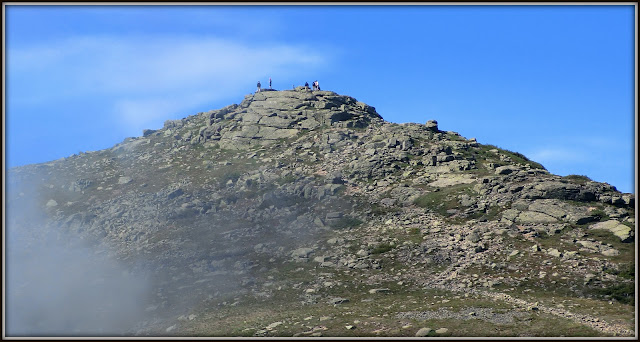 When I made it to the top of Mt. Lafayette, there still was no cloud cover.  I was able to get the classic photo looking southward along the Franconia Ridge. 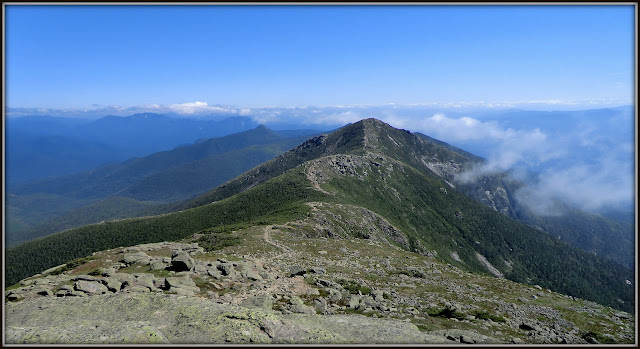 I also took a snapshot of the foundation for a structure which once stood there toward the end of the 19th century, as I understand it. 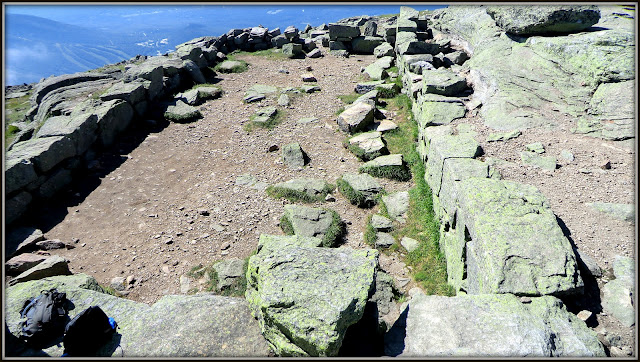 After summiting Mt. Lafayette and lingering there for awhile, it was time to begin the descent leg of the loop.  Once again, the usual snapshots were taken.

Here is the Greenleaf Hut as seen during the descent from Mt. Lafayette. 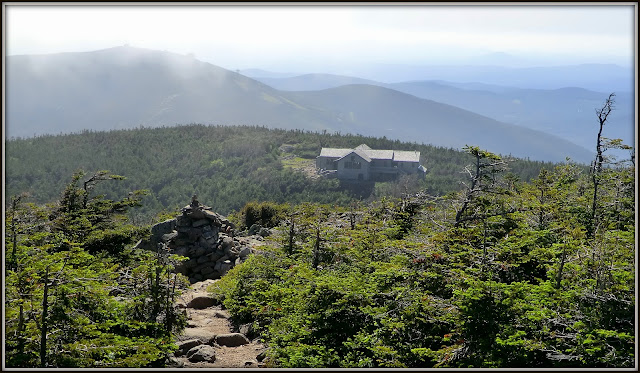 And, here is Eagle Lake as seen from the Greenleaf Hut.  As can be seen, clouds had once again moved in over the Franconia Ridge. 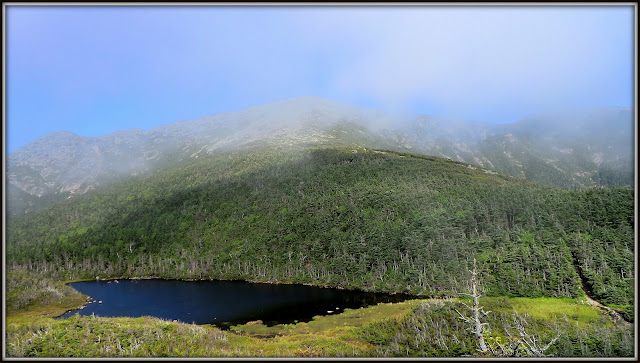 A trailside photo was taken of the Agony Ridge which would be my next destination on my descent. 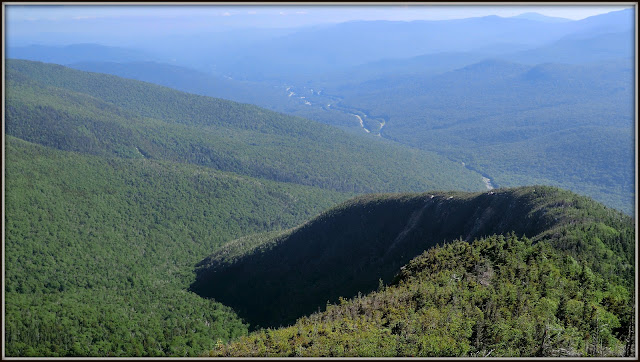 And finally, from a viewpoint along the Agony Ridge, I took a snapshot which shows a major portion of the area that I had travelled earlier in the day. 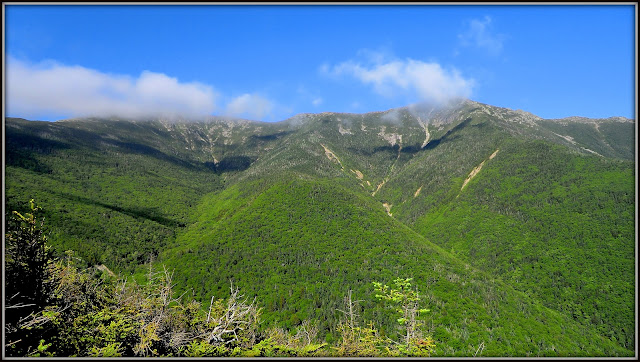 With frequent stops for photo taking, it took me just under 6 hours to complete this loop of nearly 9 miles.  I started at noon, and was back at the trailhead just before 6 PM.  I had forgotten what bad-timing it is to arrive at this particular trailhead at that hour of the day.  There are mouth-watering aromas coming from folks at the Lafayette Campground preparing their evening meal over an open fire.   Being famished after 6 hours of hiking, it's so tempting to walk across the road and become an uninvited dinner guest!

To sum it up, as Yogi Berra is quoted as saying, this hike was like "déjà vu all over again".  Nonetheless, it was still a joy to re-experience the awesome views that this loop hike provides.
Posted by 1HappyHiker at 5:22 PM

Dolores, thanks for the kudos on the photos. And yup, an occasional repeat hike on the Franconia Ridge is terrific!

John....Even though this is a popular hike your photos tell a unique story! This hike is such a classic White Mountains hike. So it is no surprise that there are many trip reports about it.

What type of camera are you using to get these awesome shots?

Grant, thank you! That’s a great way to put it. Even though many hikers have done this classic loop, I guess there is a unique story to be told with each hike.

Regarding my camera, I can’t guarantee that every Casio EX-H5 that comes off the assembly line will perform like mine. It only cost me $97 brand new, and I’m pleased with its performance. It doesn’t have a lot of “bells & whistles”, but it’s small, easy to carry in my pocket, and I don’t need to futz with settings. I keep it on automatic, and just “point and shoot”! :-)

You may be shooting the same scenes that everyone else is taking but your photos are fabulous-I agree with other commenters. Not only are they crystal clear, they are so well-framed with your accompanying description of the scene. We haven't hiked for awhile, so good to get back to seeing what others are enjoying! I too would like to know what those ravens are planning. My camera is on the blink and a new battery is half the price of your camera (and I'm not sure that is the problem). I might just consider the Casio. Of course, it is not about the camera, it's the photographer. Thanks again for sharing such nice stories and great photos of your Franconia Ridge trek. Ellen

Thanks Steve!
Regarding the photos, I sort of think that along the Franconia Ridge (and perhaps most of New England, in general), all you really need to do is “point and shoot”! There is such an abundance of beautiful scenery that it’s difficult to go wrong! :-)

Ellen, your comments are always so delightful, and so welcomed! Thank you!

I can certainly empathize with your camera situation. With such a huge variety makes and models, I find it quite an ordeal to find THE “right camera”. And, I’ve found that paying more doesn’t necessarily guarantee a better camera. I returned two rather expensive cameras before finally settling on my $97 Casio. A camera that doesn’t suit your particular needs is sort of like buying a dead horse! :-)

Regarding the ravens, they are such a fascinating creature. It’s little wonder that they are common characters in mythology from various cultures around the world!

Thanks again Ellen for your comments!
John

The photos are great, and I think what makes these interesting is the clouds and how they are moving in, out and around the summits. Most of us do have a similar set of tourist photos on a crystal clear day, but these have a different character with the cloud interaction. It really shows that you are up at the level of some of the clouds!

In retrospect, it might have been comical to watch me frantically snapping photos as the clouds moved in and out. My fear was that they were going to move in and take up residence on the mountaintops, and then there would be NO VIEWS! But, I was fortunate in that the clouds kept moving in and out like waves on a beach.

I suspect that the flowers you photographed are mountain sandwort. It's a pioneer plant that grows in gravely disturbed soils. There will be more in bloom over the upcoming weeks.

Because it grows in gravely soils, it's also very easy to disturb. Always best to stay on the trails.

You’re absolutely correct, i.e. that is indeed Mountain Sandwort. Also, you’re correct (and I’m in complete agreement) about staying on the trails in the alpine zone. Fortunately, by using macro-zoom, it’s possible to capture images of wildflowers without stepping off the trail.

I love the reports from all your hikes, John. You always manage to capture every aspect of your rewarding hikes, from 360 degree macro views of mountain ridges, to micro shots of flowers, to everything in-between—like those wonderful waterfall pics.

Rita
P.S If I had to guess, I'd say those ravens have probably bagged every peak in the area!

Rita, it’s rewarding to read that you enjoy the micro and macro aspects of my hikes. Sometimes, there are views right at your feet that rival the distant vistas of mountains and lakes! :-)

And regarding those ravens, yup . . . I suspect you’re right about their peakbagging skills. Those guys are amazing in so many ways!!

wow...so it sounds like your relationship with Casio is going long term :)

Casio is a real cutie, and low maintenance . . . makes for a good relationship! :-)