Walking on Water: The Island Line Trail in Burlington, VT

My wife and I did a day-trip over the Memorial Day weekend to visit one of New England's most unique rail-trails, i.e. the Island Line Trail which is located in Burlington, VT.  The trail covers a distance of about 12.5 miles.  However we only walked the segment of trail that begins at the Airport Park trailhead and then leads you out onto Lake Champlain via a causeway.   From there, you get spectacular views of the Lake, as well as New York's Adirondack Mountains, and Vermont's Green Mountains.

The trail's official start point is at the Oakledge Park trailhead on Flynn Street in south Burlington and then runs northward skirting the shoreline of Lake Champlain.  It continues onto the causeway and then ends abruptly out on the Lake where a seasonal bike ferry connects with South Hero, VT.   However, due to storm damage caused by spring flooding in 2011, the trail now ends on the south side of an old trestle which spans a preexisting gap in the causeway.  (Repairs to the causeway are scheduled to begin in the Summer of 2012.  Click HERE for details.)

This causeway was built in 1900 by the Rutland Railroad.  The 3-mile rail corridor across the Lake was built using huge chunks of marble that were transported to the site from various locations in Vermont.  By design, there were two gaps in the causeway.   Spanning one of the gaps is a fixed iron trestle (where the trail currently ends).  And at the other gap, there once was a swing bridge that could be opened to allow boats to pass.

The incentive behind this extraordinary effort was to connect the Great Lakes with the great New England seacoast.  It was at a time in history when shipping ruled, and the railroads served the ships.  By building this rail link northward to Alburgh, VT, it enabled a relatively easy rail crossing over to Rouses Point, NY which had a rail system that serviced the Great Lakes.

The Rutland Railroad operated trains over the causeway from 1901-1961. The Railway was officially abandoned in 1963. Despite the flood damage in 2011, the marble causeway still remains mostly intact, as does the fixed iron trestle that bridges the lesser of the two gaps.

Shown below are two maps.  The first map shows Airport Park where we began, and it also shows the point where the trail currently ends at the fixed iron trestle.  (We stopped here, but we saw others who continued beyond this point, despite signage indicating that the trail was officially closed due to storm damage.)  The second map shows the route of the entire Island Line Trail. 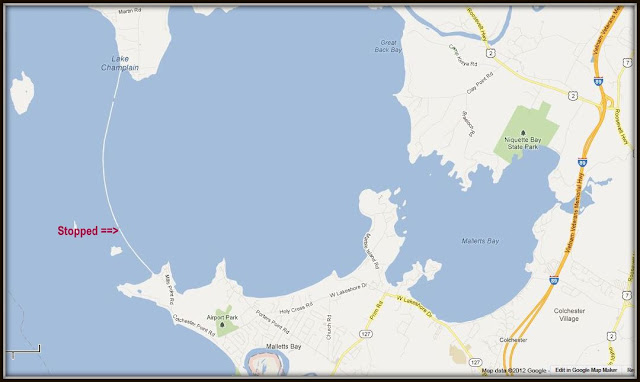 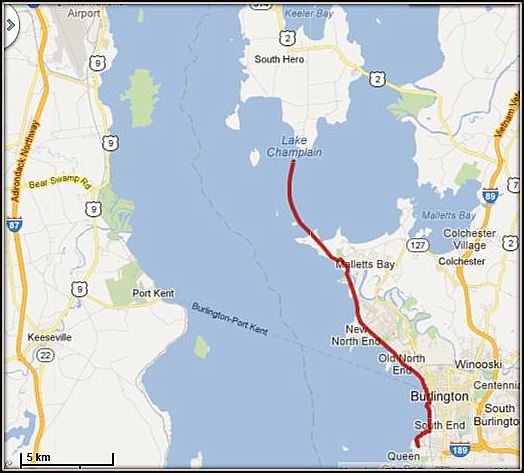 The next photo isn't the best quality, but it shows a Rutland Railroad train crossing the causeway, way back when! 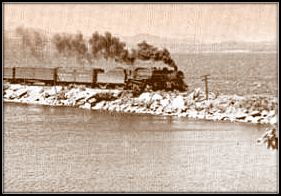 And finally, here are a few snapshots that were taken during our trek along the causeway (above each snapshot is the caption associated with the photo).

A Beautiful Day for Being Outdoors: 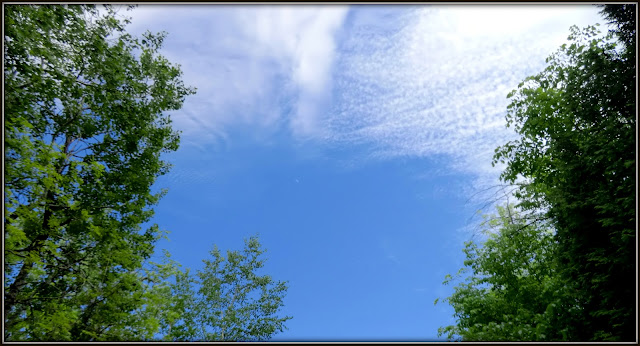 The Approach Route to the Causeway: 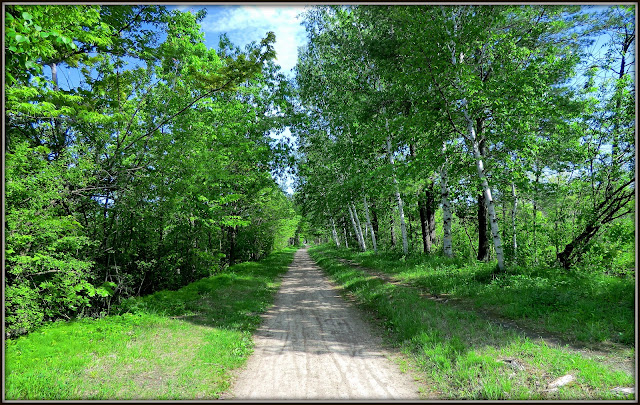 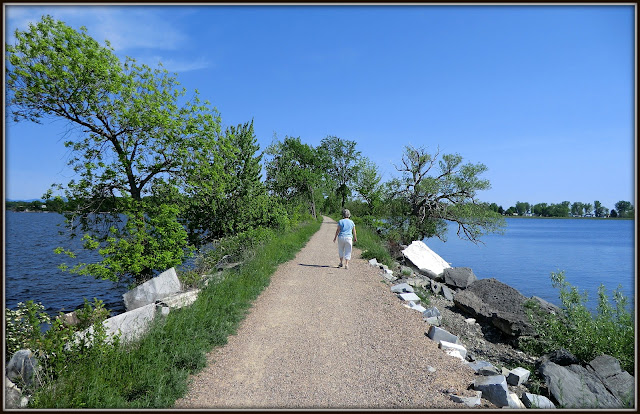 Large Chunks of Marble Visible All Along the Trail: 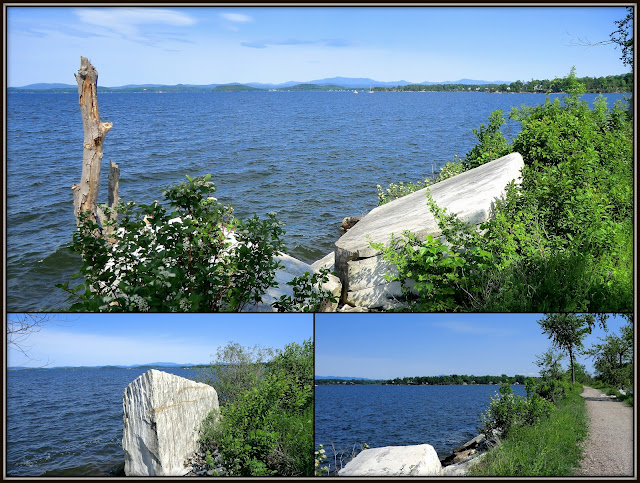 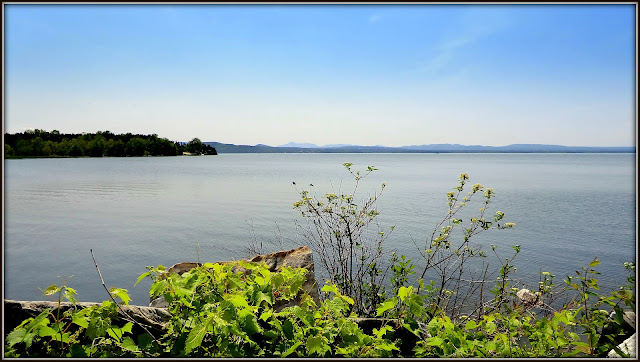 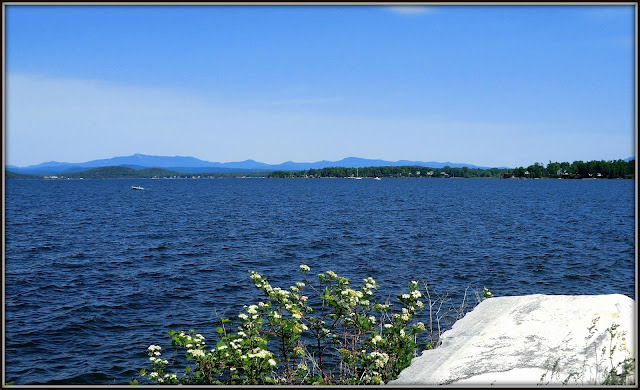 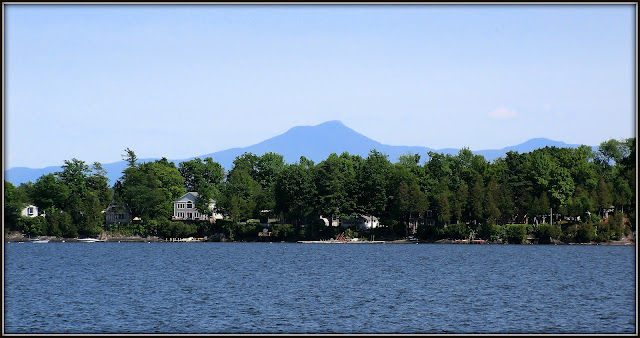 Scene Where Trail Currently Ends at the Iron Trestle: 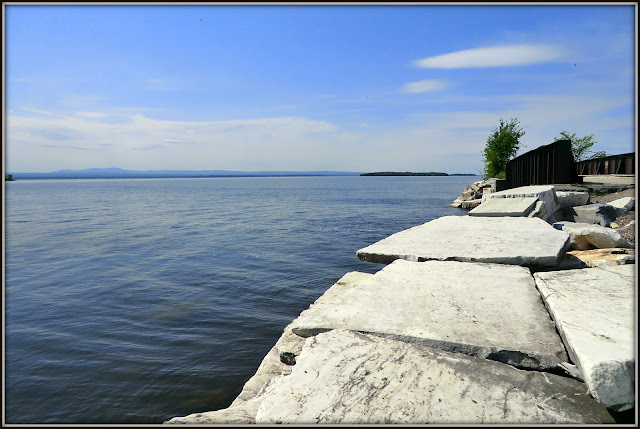 On our way home, we stopped at a Vermont roadside viewpoint which provides a nice vista of the New Hampshire mountains.  Isn't New England simply grand!  It doesn't matter where you go, the scenery is awesome! 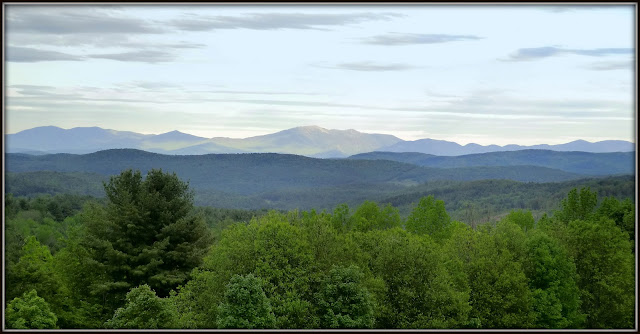 
P.S.  As mentioned in my reply to Owen (shown below), there is some talk about closing segments of the Island Line Trail for repairs during the Summer of 2012.  So, before going there, it might be a good idea to check the trail status by calling 802 861-2700, and/or checking the website at the following link:
http://www.islandlinetrail.org/
Posted by 1HappyHiker at 9:55 PM

Great adventure John! This has been on my list for a couple months now and I hope to make it up there next month. New England is certainly a magnificent area, particularly the northern half.

Hey . . . a couple of things to mention. First of all, I totally agree with you about northern New England being magnificent. Secondly, you might have already planned to do this, but if not take your bike with you when you go. Our decision to leave the bikes at home was our only regret about the entire adventure.

Also, there is some Internet chatter about sections of the trail being closed for repairs during the Summer of 2012. So, before you drive over there, you should probably check the trail status by calling 802 861-2700, and/or checking the website at the link below:
http://www.islandlinetrail.org/

Thanks for the heads-up, John. I'll be sure to check before I go.

Did you happen to check out Colchester Bog?

Dave, sorry to say, we did not visit the Colchester Bog.

This was the first time we visited this area, and until you mentioned it, we were completely unaware of the existence of a trail to the bog. I just checked a map, and see that the Colchester Bog trailhead is probably less than 300 yards from where we parked at Airport Park. Thanks for bringing this to my attention! It will definitely be on the agenda for our next visit to this truly magnificent area.

I love rail trails and this one sure is a beauty. The water views are exceptional—you sure had a lovely day for a hike. Looks like this trail would be excellent for biking too, as you say.

When you go back with your bikes be sure to take lots of photos along the trail's entire length. I'll be looking forward to reading all about it!

Hi Rita . . . complete agreement here with your sentiments about rail trails!
Sometimes, all you want is a way to explore the great outdoors without climbing a mountain! Rail trails fill that need, and can be enjoyed either on-foot, or by bike.
We look forward to exploring the entire length (or a sizeable chunk of it) sometime later this summer or early Autumn.

Can’t say it often enough . . . thank you for taking time to read and comment on my blog postings!

Very interesting trip, you had a really great day, too! Thanks for posting this on your blog, you always seem to find the most interesting places not only visually, but historically. I like reading about the history behind these places. This would be a great day trip for the family!

Thanks Summerset for such a nice reply to my Blog posting!!

I agree wholeheartedly that this would make a great day trip for your family, or any family, especially those that are into bicycling. As indicated in my reply to Owen, our only regret about this adventure was that we didn’t bring our bikes. Trust me, we will definitely enhance our next trip to Burlington by bringing our bikes! :-) However, I must hasten to add that trekking out onto the causeway without bikes is a very pleasant experience. On the day of our visit, there were almost as many pedestrians as there were bicyclists!

Thanks so much! I know this has been a few years, but my family is hoping to do the walk you did - how long was just this portion?
Tracy

Tracy, of course there are so many variables to consider, such as personal walking speed, or whether you intend to do it by bicycle, etc, etc.

However, all that being said, if you plan to walk the portion that my wife and I walked, then I roughly guesstimate that you should plan on at least 2 hours (round trip).

Sorry I’m unable to be more specific. But regardless, you have my best wishes for a pleasant walk at this unique location.

VTR CN or NECR needs to buy back the ROW and get trains running again...so many amazing railfanning locations...and I live a few hundred feet from the ROW

Paul, many thanks for reading my blog and for taking time to post your comments! Much appreciated!

Sad that Rutland employees went on strike, I wonder if the strikes had never happened, if the RR would still be around and running trains on this beautiful line...Hope someday it would be restored to Railroad service

I have biked this many times as I live very close in the Islands, such a nice place to bike.

Thank you for reading my blog and posting your insightful comments. Much appreciated!