Views from Iron Mountain Trailhead, and Then the Runner-ups

The views from the trailhead for the Iron Mountain Trail are almost enough to make you consider stopping there and going no further!  If you've ever been to that location, then you surely know what I mean.  Those of us who are enthusiastic about hiking will eventually move forward and do the hike, even though we know the views along the trail will be very nice, but "runner-ups" to those experienced at the trailhead.

Just in case you've never been to the trailhead for the Iron Mountain Trail, the next three snapshots provide a sample of the views from this spot which is located on the old Hayes Farm property at the end of Iron Mountain Road in Jackson, NH. 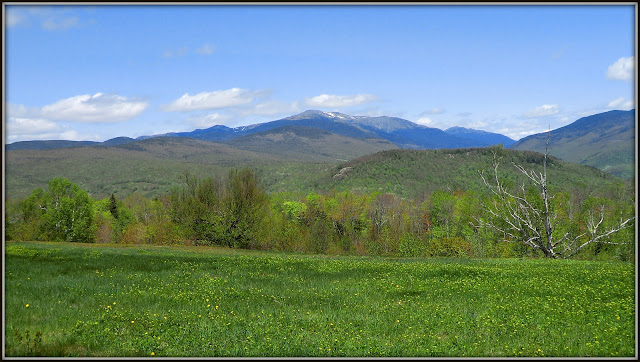 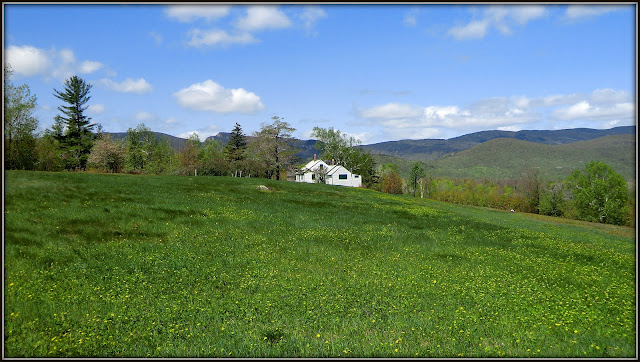 Okay, my goal for this particular day (17-May) was not to go to Iron Mountain!  Instead, I wanted to visit a ledge just to east of Green Hill.  My plan was to use just a small segment of the Iron Mountain Trail to get me to the point where I could leave the trail on the public land of the WMNF.  Upon leaving the trail, I would bushwhack southeasterly to reach a col along the ridge between Green Hill and Iron Mountain.  Once on the ridge, I would then head easterly toward my targeted ledge.  For my return leg of the journey, I would follow the ridgeline westerly to meet up with the Iron Mountain Trail which I'd then follow back to the trailhead.

My approximate route is shown on the map below.  (Click to enlarge.) 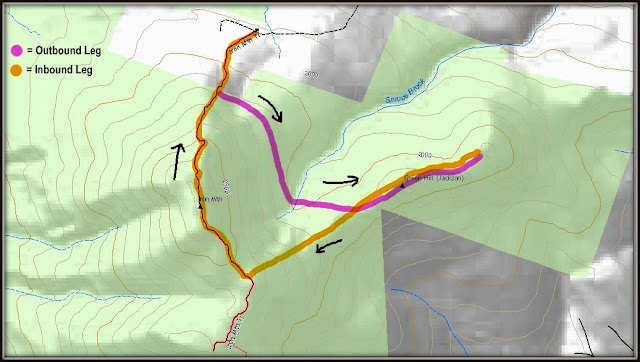 The bushwhack to the col was through open woods and was very quick and easy.  Upon reaching the col, the travel along the ridgeline wasn't difficult, but it was extremely slow-going.  There were patches of what I call "bayonet-conifers".  If you've done off-trail travel, I think you'll know what I mean.  I'm not talking about the nearly impenetrable conifers that you have to push your way through.  Rather it's the type that requires slow and careful maneuvering to avoid being slashed by the razor sharp "bayonets" that protrude from the trunk.
My hope was to find some remnants of an old trail which once ran along the ridgeline.  If the old trail is still there, then I missed it!  I did find some occasional trail-like corridors, and a few even had some piled rocks which could have been old cairns.   However, each of these corridors quickly faded away and the battle with the "bayonet-conifers" began again!
Shown in the next photo is one of the corridors I ran across along the way. 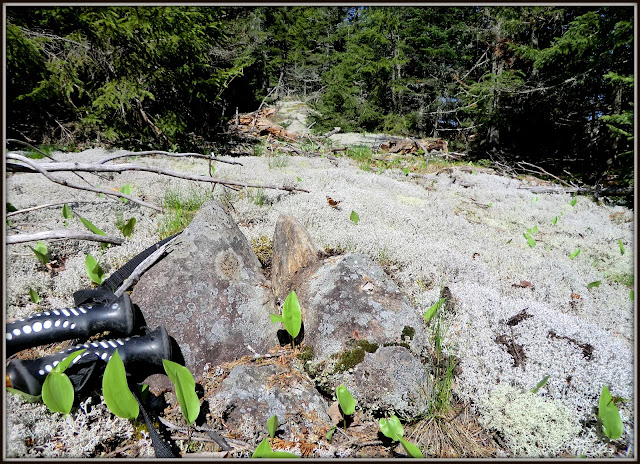 It was good to learn that travel is effortless in the open hardwoods below the ridgeline, and that it is slow-going in the conifers along the ridge.  For any future visits to this ledge, I would likely leave the Iron Mountain Trail at the same spot, but would then make a beeline for the ledge itself.  I did some poking around while I was up there, and think this is a very doable route.
Okay, that's more than enough chit-chat about getting to the ledge.  What did I see when I got there?  Well, first of all, upon arrival at the ledge I saw clear evidence of the bootleg trail that traverses some private land and comes up from the east.  I'll leave it to the readers discretion if they want to pursue that route.   Regardless, the views from this ledge are more expansive than I'd ever thought they would be!  The next series of photos provide a sampling of what can be seen from this terrific spot.
Presidential Range 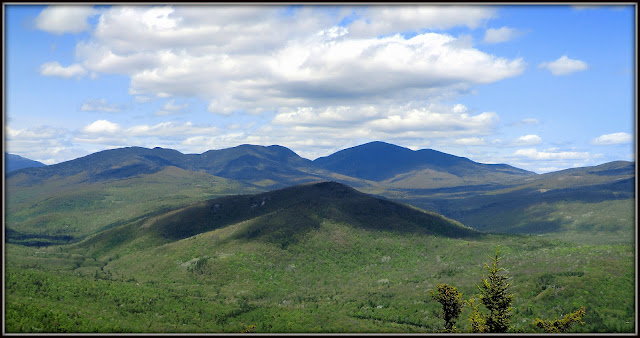 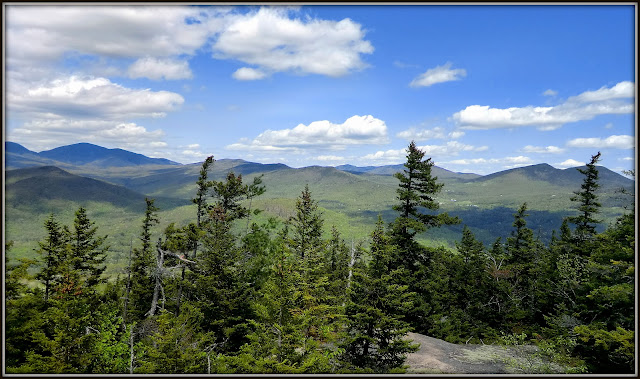 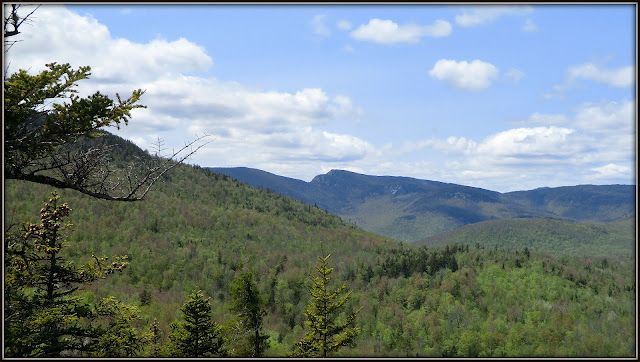 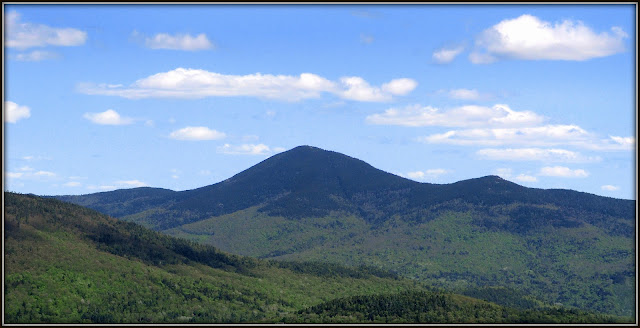 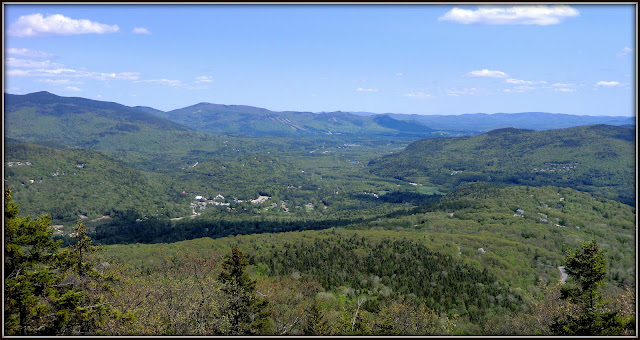 Zoomed Photos of Some of the More Prominent Landmarks 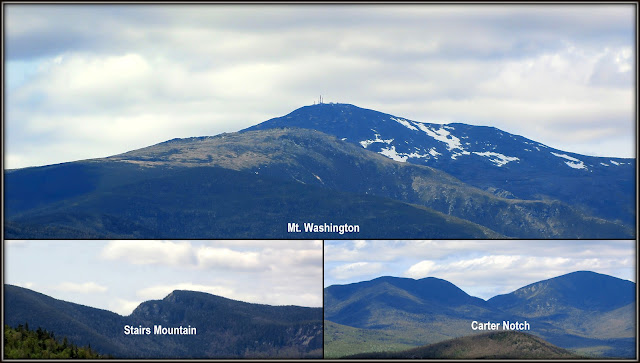 Besides all the gorgeous landscape scenery, there were plenty of beautiful things to see right at my feet.   I'm talking about colorful works of Mother Nature, such as wildflowers and butterflies that I photographed along the way (next photo). 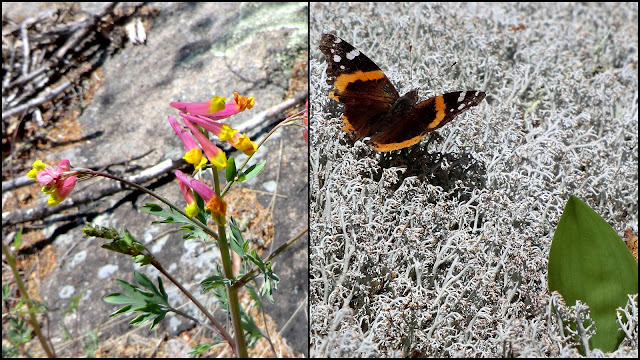 After a thoroughly enjoyable visit to the ledge, I trekked westward along the ridgeline and then eventually hooked-up with the Iron Mountain Trail.  Along the way, I only found a few short segments of what might have been the old trail corridor.
I didn't take time to go to the South Cliffs viewpoint on the Iron Mountain Trail.  Not only was my time running short, but also I knew that I'd seen similar views earlier in the day from the unnamed ledge that I visited.
Upon arriving at the top of Iron Mountain, a few snapshots were taken of the ruins of the old fire tower (next photo). 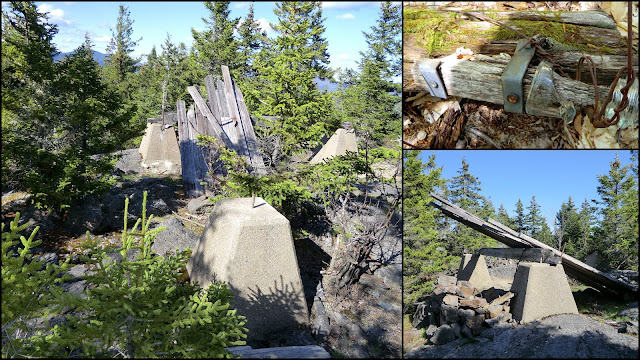 The descent from the fire tower area back to the trailhead is tedious.  This section of trail has been very eroded for the past several years.  However, it seemed to me that there was even deeper erosion since my last trek along this trail a few years ago.  Perhaps Hurricane Irene might have played some role.  Shown below are a couple examples of the trail erosion. 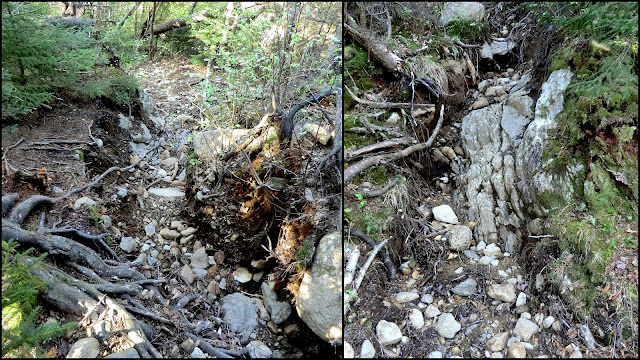 P.S. For anyone wanting to read about the abandoned trails in this area, as well as other interesting history about Iron Mountain, my fellow Blogger named Karl has an excellent report on his Blog (click HERE).
Posted by 1HappyHiker at 3:31 PM

The old Hayes Farm is one of my favorite spots in the world. The family that owns it is working on putting it into a conservation easement. Here's a cool time-lapse video my friend Joe Viger shot from there last week: http://joeviger.blogspot.com/2012/05/cloud-watching.html

Kevin, thank you for posting the link to the awesome time-lapse video.

And yes, the old Hayes Farm at the Iron Mountain trailhead is indeed a gorgeous spot. Each time I go there, I have this uneasy feeling that it’s somehow cheating to get such a view without hiking to it. Maybe to lessen my anxiety, I should park in Jackson and walk up the steep road to the farm! :)

Thanks again for your comments,
John

Great report, John - that ledge has some amazing views. That view towards the Presidentials is stunning! It also gives you a good look at little Popple Mountain in the foreground. Some interesting looking ledges there. Is the spot on Green Hill a large ledge with room to sit and take it in?

And that Hayes Farm is an amazing spot as well.

Thanks Steve! You do have an eye for detail! There are indeed some interesting-looking ledges on Popple Mountain! They have piqued my interest more than once! It appears that there might be several bushwhack launch-options, such as the Hall XC-Ski Trail, Winniweta Falls Trail, FR 325 off the Iron Mountain Road, etc.

Regarding the Green Hill ledge, it is very spacious and luxurious . . . sort of a Cadillac variety of ledges! :)

You had a spectacular day for a hike, John. The views of the old Hayes Farm Property are so welcoming—wouldn't it be great to have a farm in a location like that one?
I liked your description of this hike. Everything from the difficult bushwhack to the "little things" along the trail, to the photos of the eroded trail; your report does a great job of filling in all the details—almost like I had taken the hike myself!

Rita, as I’ve mentioned before, I welcome and value your comments. Please feel free to post negative comments as well. As a fellow-blogger, you know that it’s difficult to judge readers’ likes/dislikes unless there is feedback.

Anyway, yes indeed, the old Hayes Farm property is special and unique. I was happy to hear from one of the respondents (Kevin) that the family who owns the property is working on putting it into a conservation easement.

Another great find John. Keep up the good work! BTW we went up to Sugarloaf and Hogsback in Benton on Saturday. We had a great day up on the ledges of both of them. We took all day long and really enjoyed hanging out soaking up the views.

Fantastic! It’s terrific to read that you were apparently as taken with Hogsback and Sugarloaf as I was. Usually, I don’t like to repeat hikes, but those two spots might just be an exception!! Unless resumption of the logging operations interfere, I’ll probably head back to Benton in the Autumn for a repeat a version of that hike.
http://1happyhiker.blogspot.com/2012/05/delicious-combination-of-sugarloaf-and.html

Thanks for the feedback!

Finally catching up here! What a nice day and terrific views. I seem to recall Karl's post, but I need to go back and re-read it. Thanks for adding that link; I do like to know the local history of these places.

I know what you mean about “finally catching up”! It’s often a challenge to stay afloat, much less stay ahead of the game!

Anyway, yes, when you have the opportunity, please take a look at Karl’s blog. He has a lot of really nice info there about the history of Iron Mountain.

Thanks for the go-ahead to post negative comments, if warranted! I must honestly say that so far I've enjoyed all your posts—the pictures are wonderful, your writing is interesting and informative, and I usually learn something I hadn't known before.

I agree though, that it's sometimes hard to judge likes and dislikes without negative feedback, and I have been called out on a few of my posts for not providing the whole story (see "Rosalie and The Burn Plantations" post) and for not providing an up-to-date link ( see "Carlsbad Caverns" post).

At first when I read those comments I felt a little bit like a school kid who makes a mistake on an important presentation. But I got over it and I realize that the comments section is a great tool for offering clarification and promoting discussion. So feel free to post negative comments on my blog as well!

Rita
P.S. I'm happy to hear about the Hayes farm being considered for a conservation easement. We need more farmland put into conservation, and fewer properties put into "production" as parking lots and shopping malls!

. . . and hello again to you Rita! What a very thoughtful reply! Thank you.

The Comments section of the Blog does indeed have potential for being a great tool for promoting discussion. Perhaps there are a number of reasons why this potential is not used to its fullest. I suspect that some folks are “put off” by having to enter a two-word authentication code in order to post a comment. And, I suppose many times, folks just simply are uninterested in the topic presented in the report. If a posting receives very few comments, then I suppose one interpretation has to be that there is a lack of interest. And therefore, perhaps one should reconsider whether it’s worthwhile to post similar topics, especially if one begins to see a pattern. A criticism I’ve received is that I can get too carried away with rampant speculation, and so it’s probably best that I stop here! :-)

And yes, a big “amen” from me regarding your statement about fewer properties being put into parking lots and shopping malls! Enough already!

Nice description and pics, John. I must point out however, that your picture of "Jackson Village", is actually Storyland. Thought you might want to know.

Thanks! Of course you are correct. The buildings shown just left of center are indeed Storyland. The caption used for the photo was inadvertently misleading. The intent was to provide a broad overview of what could be seen of the general vicinity of Jackson, NH, such as Storyland, as well as the condos and other residences that dot the mountains around the Jackson area. I’ve updated the caption to read: “Vicinity of Jackson, NH”.