The Great Gulf, plus a Great Friend, Equals a Great Day!

Please take a look at the photo shown below. 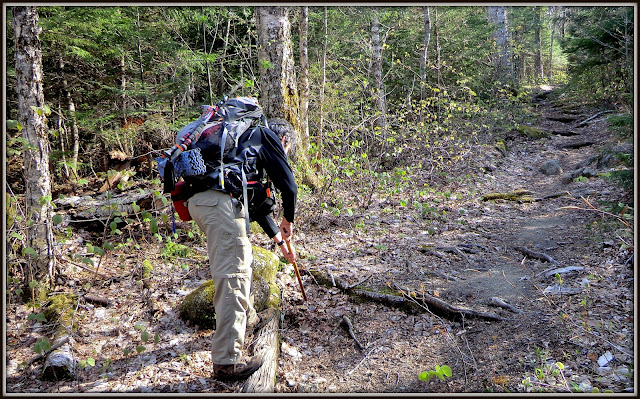 That photo shows my friend Marty who is assisting me with doing trail maintenance in the Great Gulf region of the White Mountain National Forest on 05-May-2012.  It takes a true friend to agree to help with an undertaking such as this!  Especially considering that we had nearly 40 water bar drainages to clean, plus about a half-dozen downed trees to remove from the trail corridor.

The lower section of the Osgood Trail (0.8 mile), as well as the Osgood Cut-Off Trail (0.6 mile) are two of the six trails that I have adopted under the auspices of the Appalachian Mountain Club (AMC) and the U.S. Forest Service (USFS).   As a participant in these programs, volunteers agree to patrol their adopted trails at least twice each year and clear the drainage of debris, remove downed trees from the trail, and other trail maintenance tasks as needed.

Marty and I opted to do this maintenance work on this particular day since the weather was overcast and drizzly at the time we set forth.  It seemed like a great day to do work in the forest since there would be no views from the high peaks with this type of weather.  Well, when you live in the mountains, the conditions can often change unexpectedly.  That is exactly what happened on this particular day!  By the time we arrived at the trailhead, conditions had markedly improved.  It was rapidly becoming a glorious sunny day!

As a mark of a true friend, Marty agreed to stick with the original plan of doing trail maintenance, rather than doing a hike to a mountain peak to take advantage of the vastly improved weather conditions.  And so, we crossed the Peabody River on the suspension bridge to begin our work detail.  The bridge and the river are seen in the two photos that follow. 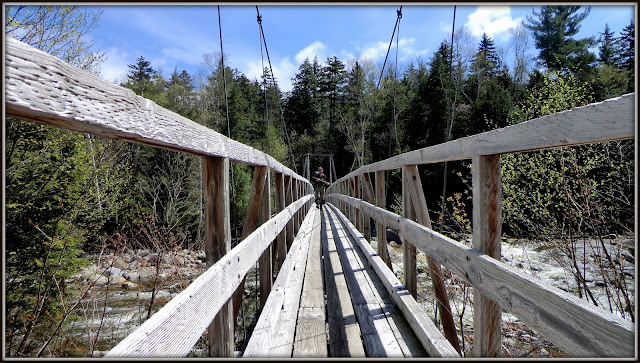 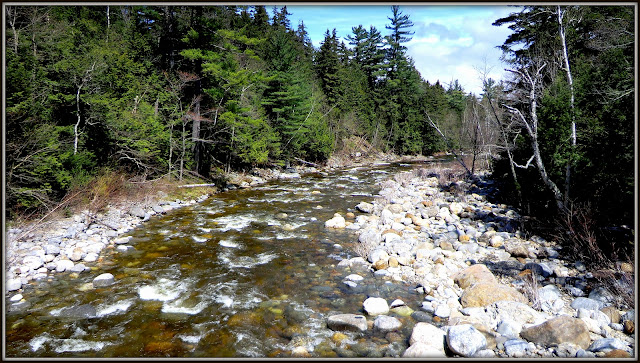 It wasn't all work and no play!  We still had time to "smell the roses", or trout lily in this case! 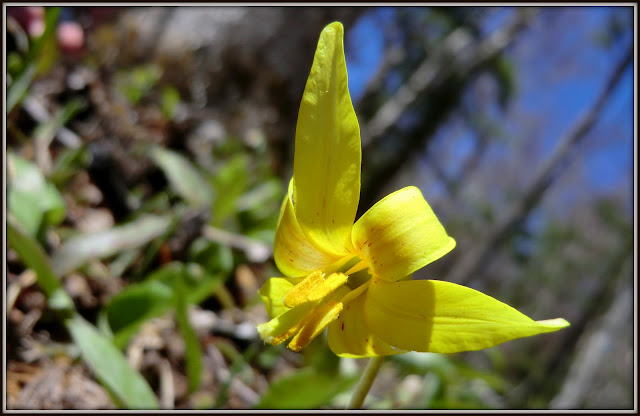 Also, it wasn't as though we were deprived of views of magnificent peaks.  We were working in the mountains, after all!  The next two photos show two of the vistas we enjoyed.  The first photo is looking into the mouth of the Great Gulf.  Portions of Mt. Jefferson, Mt. Clay and Nelson Crag are seen rising above the floor of the gulf.   The second photo features Mt. Madison standing proudly at the top of another gulf which is called the Madison Gulf, appropriately enough! 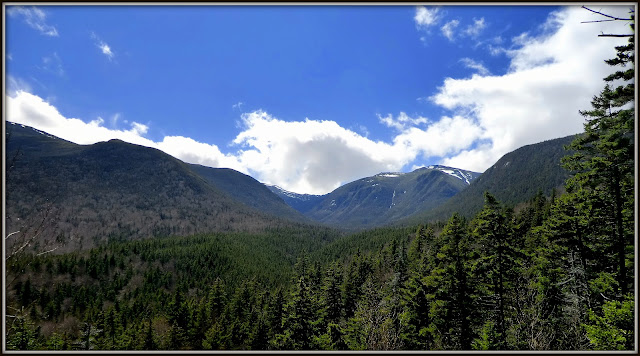 Mt. Madison as Viewed from The Bluff (see page 97 of 29th edition of White Mountain Guide) 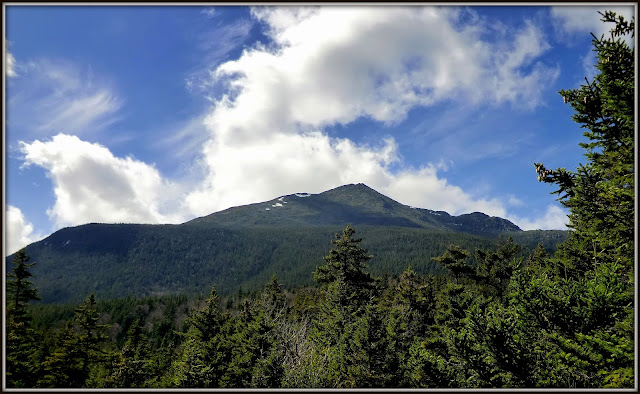 In addition to the gorgeous scenery shown in the preceding photos, we took advantage of the many opportunities to ramble off-trail to the banks of the West Branch of the Peabody River.  Here we were treated to up-close views of this attractive river.  The next two photos show a few typical scenes. 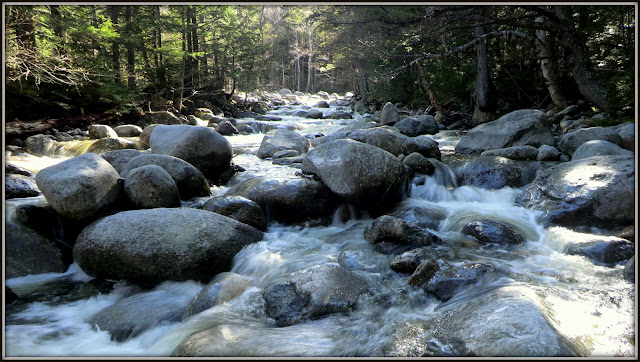 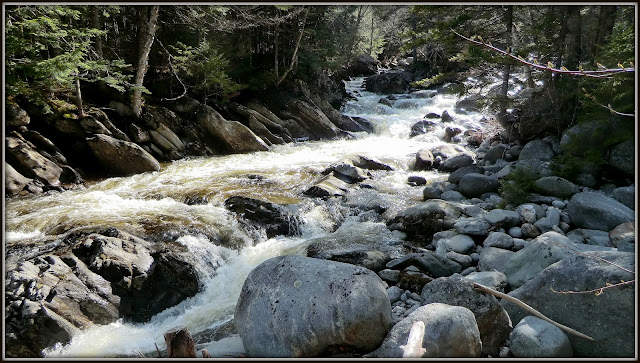 We even took time to explore a portion of the old Osgood Trail that used to cross the West Branch of the Peabody River on a high bridge.  The next photo was taken at this former crossing point. One of the old bridge abutments can be seen in the top right portion of this snapshot. 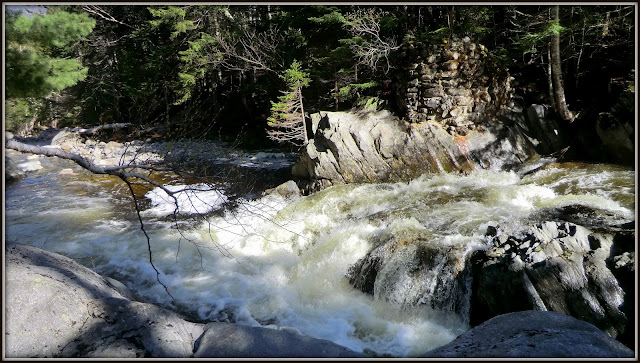 We were not the only folks enjoying the river on this day.  At one point along the way, we caught sight of some kayakers making their way down the river (next photo). 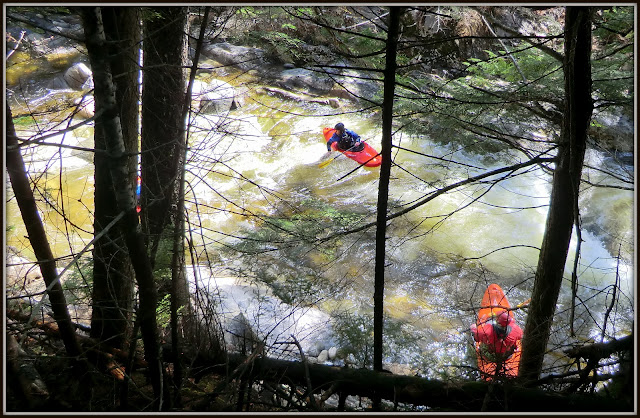 To help make some sense out of the route that Marty and I followed on our work/play mission, shown below is a map.  Our route is highlighted in yellow.  Outlined in a pinkish color are my adopted trail segments. (Click on map to enlarge it.)

And here is just a bit of additional trivia information.  Benjamin Osgood was a famous guide at the old Glen House back in the late 1800s.  In 1878, he led a crew who cut a trail leading from the Glen House to the summit of Mt. Madison.  The trail and ridge that it follows were named for him.   Although a portion of the trail's lower end was relocated several years ago, the remaining sections are the oldest route still in use to Mt. Madison's summit.  Regarding the Osgood Cutoff, it is part of the Appalachian Trail, and it provides a shortcut between the Great Gulf and Madison Gulf trails.
To sum it up, I never consider trail-work as actual "work".  I derive as much pleasure from this as I do from pure hiking.  This particular outing was made even more pleasurable by the congenial company of my friend Marty, as well as the totally unpredicted sunny day which appeared from out of nowhere!
Posted by 1HappyHiker at 1:25 PM

Yes, let’s work on a scheme for modifying your magnet so as to also attract snow! :)
This modification should be programmed to become effective in late Autumn and remain in effect until at least late Winter! :)

Wow, you can't get any better for that for work views! Some people are staring at a tan cubicle and wishing they were elsewhere.

I really like this post. I always wondered who takes care of trails—clearing trees and debris to provide a quality hiking experience for the rest of us. Now I know one of those people!
The pictures are wonderful too. The Peabody River looks like it's flowing with spring run-off; it's a pretty place.
I'm glad the sun came out to shine on this endeavor. Thanks to you (and Marty) for your trail maintenance work on Cinco de Mayo!

Regarding the views, I’m not “beating my chest” about this since really I have nothing to do with it. However, the views from this short 5.9 mile loop are indeed pretty rewarding. And actually, the view into the Great Gulf from the Osgood Cut-Off just made it “officially” into the White Mountain Guide in the 29th edition. The view has always been there, but it has been one of those “hush-hush” things up until now! My friend Steve Smith is the one who first made me aware of this view, many years ago.

Thank you so much Rita for taking time to post your thoughts and comments!!

Regarding your reference to Cinco de Mayo, I heard a comical play on words on a recent newscast about a sink hole that occurred on an unfortunate homeowner’s property in Florida on 05-May. It was dubbed as the “Sink Hole de Mayo”. Fortunately, Marty and I did not have to deal with a “Sink Hole de Mayo” during our trail maintenance adventure! We had more mundane things to deal with, like downed trees and cleaning the water bar drainage. :)

Thanks again for your posting . . . much appreciated!