The Doubleheads: Signs of Winter Coming to an End

The snowfall in New Hampshire during this 2011-2012 winter season has generally been disappointing, and so I'm ready to say good-bye to this winter of discontent.  Some early signs of Springtime are beginning to emerge here in the northern part of the State.  Many low-lying hillsides, especially those with a southern exposure, have only a patchy (if any) snow cover.  This can be seen in the photo below on the hillside above the covered bridge in Jackson, NH which I crossed en route to my trek to the twin-peaked mountain known as The Doubleheads. 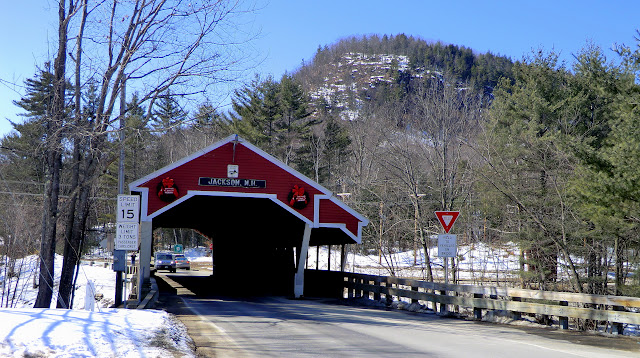 During my hike, there were other signs of winter's end.  For one thing, the temperature was nearly 50 degrees!   In the following photo you'll note that I was wearing a T-shirt.  This image was reflected from a window on the Doublehead Cabin located atop North Doublehead (3,053 ft elevation). 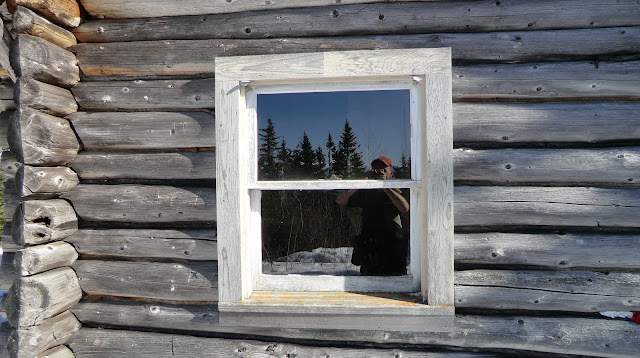 The next photo is a collage showing the front and rear of the Doublehead Cabin. Details of how you can arrange to spend the night here can be found at the Recreation.gov website (Click HERE.) 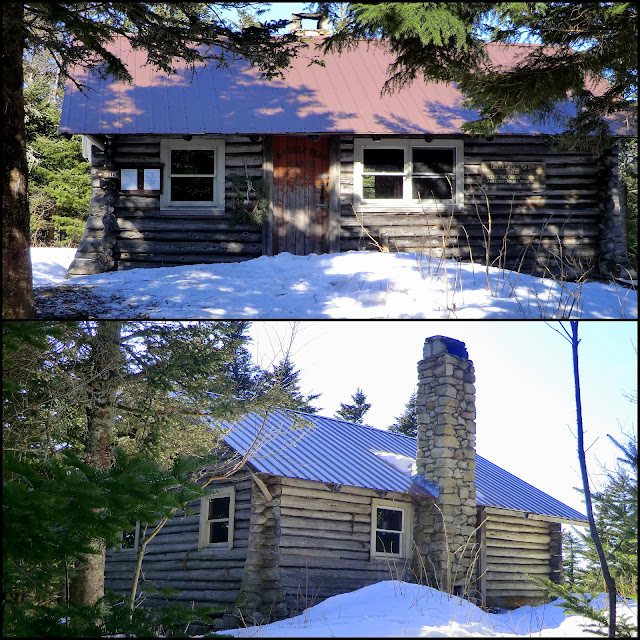 The next photo shows a gathering of snow fleas which sort of resembles pepper sprinkled on the snow!  This is yet another sure sign of the approaching spring season.  These tiny insects are not actually fleas but rather are a type of springtail with a scientific name of Hypogastrura nivicola.  (Click HERE, to read more about the snow fleas.) 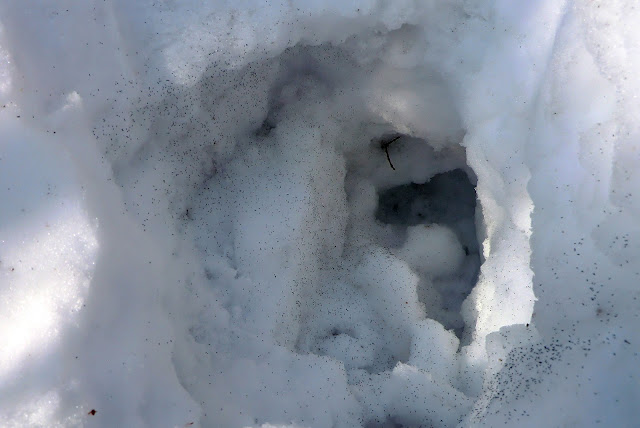 Okay, that's quite enough about the signs of winter's end!  And so, here are some brief details about the hike itself which occurred on a sunny 11th day of March.
On the way to the hike, I pulled over to the side of the road to snap a photo of my hiking destination, the Doubleheads!  (North Doublehead is on the left and South Doublehead on the right.) 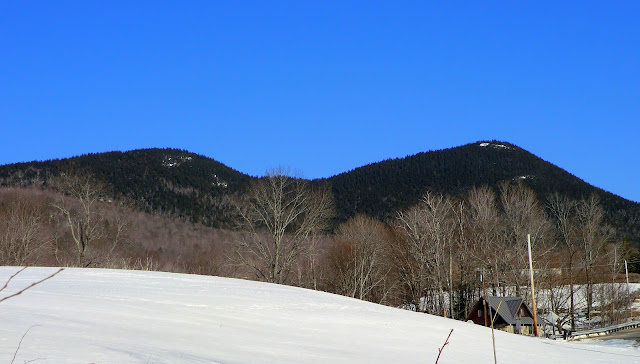 I opted to do a counterclockwise loop hike over the Doubleheads.  This meant ascending via the Old Path and using the Doublehead Ski Trail for my descent.  From start to finish, the trails were snow-covered.  Previous hiker-traffic had compacted the snow such that you could do the hike without snowshoes.  Many hikers had done this which resulted in a choppy surface, but with only occasional postholes.  Due to the warm temperature and softened snow, I opted to wear snowshoes to lessen the possibility of creating more postholes.  On my descent, I had a backcountry skier stop and thank me for wearing snowshoes on the Doublehead Ski Trail.
The following snapshot is representative of the trail conditions encountered throughout the hike. 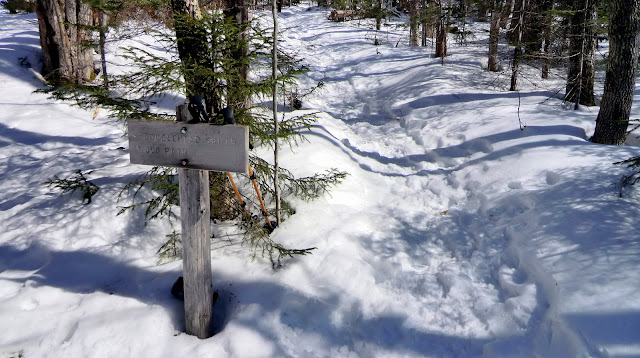 It took just slightly over an hour to reach the first ledge on South Doublehead.  From here, there are expansive views of many high peaks in the White Mountains, but the starring-role in my opinion belongs to the view of the Presidential Range and the distinctive U-shaped Carter Notch. 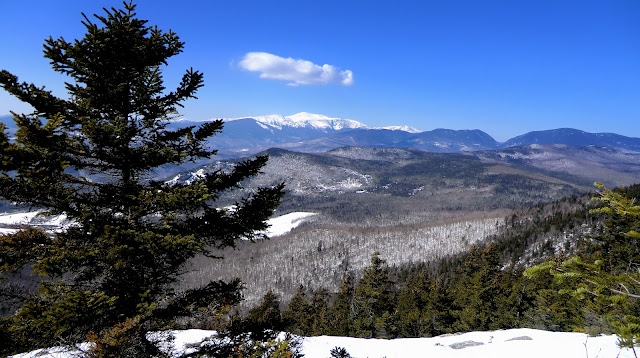 And of course, a Presidential view would be incomplete without a zoomed photo of Mt. Washington! 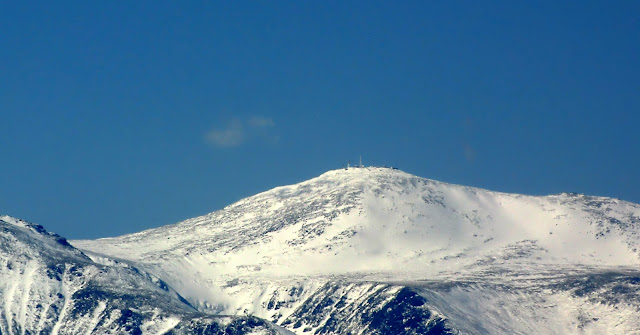 The next series of photos show some of my other personal favorite views, which all happen to be from South Doublehead.
Shown below is the top of one of the knobs on South Doublehead.  I don't know why it merits two large cairns!?  The view is looking eastward toward the State of Maine. 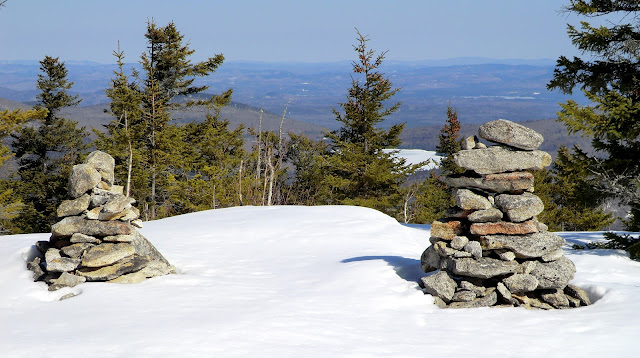 The next snapshot highlights a picturesque body of water known as Mountain Pond, which seems like an appropriate name for any pond located in the mountains! 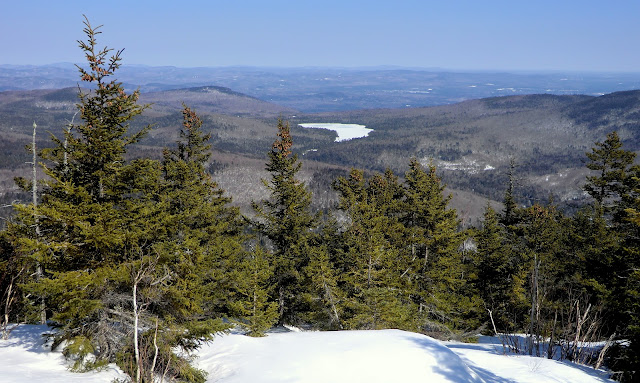 The next photo is a zoomed image.  In the foreground is a tiny range of mountains in NH (Mt. Shaw is on the left, and on the right are two peaks collectively called the Gemini).  Looming directly behind those mountains is Pleasant Mountain which is located in Maine. 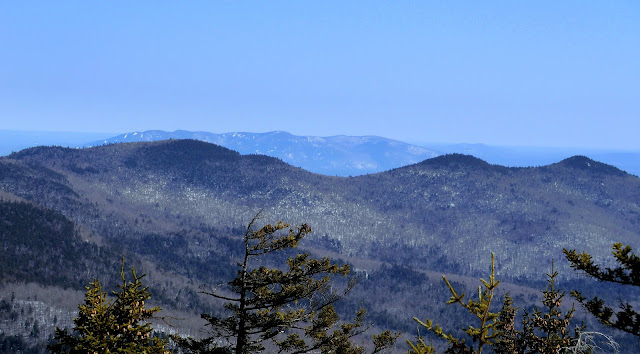 The next snapshot is looking northward toward peaks in the Baldface-Royce mountain range.

To sum it up, this is by no means an all-day hike.  Nonetheless, the views are rewarding, and the loop does provide a respectable workout with just over 1,800 ft elevation gain, and a round-trip mileage of just over 4 miles, assuming you include the spur-trail viewpoints on South Doublehead.
Posted by 1HappyHiker at 1:06 PM

I hate to keep talking about how weird this winter has been, but... it has!

I'm glad there's still some snow up there, though. I'm hoping to get one more trip up to the Whites this weekend before all the snow is gone. Thanks for the inspiration :)

Hey Ryan . . . mega thanks for your comments! You have my best wishes to experience some snow when you come up next weekend. It could happen! I went out today for a short ramble (nothing worth blogging about), and despite 2 consecutive days of temps near or above 50˚, there was still some snow + a bit of annoying ice!

It's been well over 60 for the past several days in Keene... just unbelievable. But I'm one of those people who always forgets that it really is much cooler in the north country, so I'll stay optimistic about the possible hikes this weekend. And I'll try to make a good report of it, too :)

Years since I have been to the Doubleheads, thanks for the post!!

Patches of bare ground at low elevation, but in spite of the tropical temps trails seem to have kept their snow cover.

Know what you mean . . . a number of years had passed since I last visited the Doubleheads!

As you know, it provides some good views for just a moderate investment of time and effort. It’s an especially nice spot to visit on a sunny weekend day when crowds of hikers are congregated at the more popular trails! :)

Thanks for your comments,
John

Wow, John, another stunning post! The views along this hike are incredible, and that cabin looks like a wonderful place for a relaxing get-away. And, as usual, I learned something from this story as well. I had never heard of snow fleas (springtails) before! Amazing, isn't it, all the creatures we share this earth with that we know so little about.
I agree with you about this winter being a disappointing one. I was out cross-country skiing last week in temperatures approaching 60 degrees. That's too warm! Might as well be spring...
Rita

Hi John -- You have a knack for picking blue sky days too! Ellen

Oh yes, it was warm out there today, too, with many signs of spring at the lower elevations, a bit of monorail emerging along with mud. Between your post and the weather report, I decided to dig out a light weight long sleeved shirt and wore that without the fleece vest for most of today's hike. It was 46 degrees on the summit of Waumbek, even with the wind and clouds.

Hi Rita . . . yes, this little blue speck in the universe that we call Earth has a plethora of flora and fauna to learn about, and to learn from!
Regarding your XC-skiing in nearly 60 degree weather, as you say, that it too warm! However, I always get a “Rocky Mountain high” (if you will) out of the dichotomy between comfortably wearing a T-shirt and engaging in a snow sport!

Hi Ellen . . . it is so nice to have the luxury of being selective about the days to go hiking! ;)

Ah yes . . the appearance of monorails + the emergence of springtails . . . Spring has nearly sprung!

Won’t be long before we have wildflowers + biting bugs! :)

I must ask how do you find these amazing hikes to do? Does this sort of knowledge just come with being a NH resident? :)

Hey Grant . . . well, as they say, everything is relative! I think the hikes that you do are pretty amazing!

Regardless, the types of hikes I do are motivated by the fact that I need something new to do, or else I easily get bored. I’m frequently studying maps and looking for new things for either bushwhacking, or for approaches to familiar locations via trails less-travelled. However, I do end up repeating some hikes from time to time since I’m a day-hiker and prefer to drive less than 1.5 hours from home to launch a hike. There are only so many truly new hikes that one can do without camping overnight and/or driving greater distances. :)

Really great pictures! I really want to do The Doubleheads sometime soon, because they're in Jackson (my future town of residence...hopefully) and they look like they have amazing views! It looks like you picked a picture perfect day...literally! Your first pic (the covered bridge) is always a sight for sore eyes and a great leading photo for your blog post. Another awesome report!

Thanks so much for your very generous comments about the Blog report and photos!
It’s very easy to understand why you are drawn to Jackson! It’s such a quaint and picturesque New England village + there are mega opportunities for year-round outdoor activities.