Mt. Hayes on a Windy Day

Wind was a definite factor for me when considering which hike to do on 26-February.  Everyone has their own likes and dislikes.  Wind is a definite "dislike" for me, especially when hiking.  A breeze is fine, but strong and gusty winds spoil the hiking experience for me.
To lessen the discomfort of the blustery conditions on this day, I wanted a trail that was forested, plus a destination that was relatively low in elevation.  In the Gorham/Shelburne area of NH, there are a number of hikes that met my criteria.  I eventually settled on a 6.6 mile (round-trip) hike to Mt. Hayes (elevation 2,555 ft).   Although it had only been about a year since I'd visited Mt. Hayes via the Mahoosuc Trail, it had been over 5 years since I'd climbed this mountain via the Centennial Trail.
Upon arriving at the junction of North Road and Hogan Road, I was delighted to see that a large area had been plowed for parking.  It was also great to see that the trail had not been recently travelled and there was only about 5 inches of powdery snow from the day before.  I find it so enjoyable to hike through the forest when the snow is pristine and undisturbed.
The next two photos show the type of conditions that I encountered as I hiked the Centennial Trail. 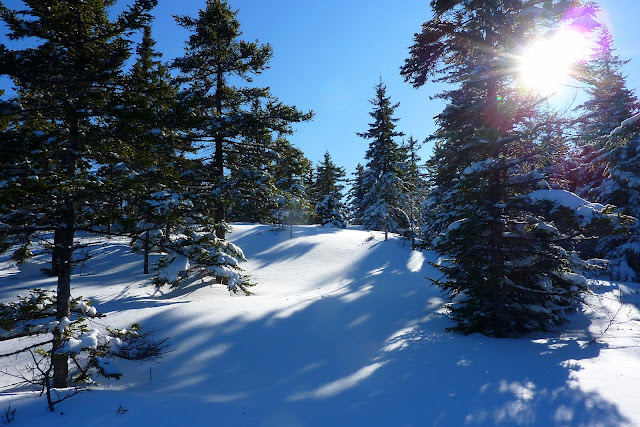 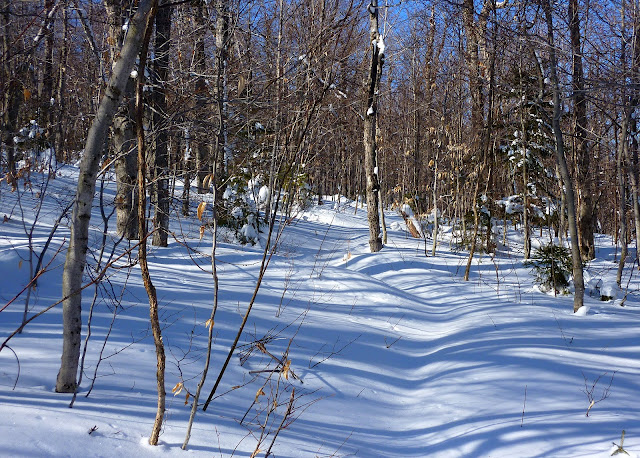 En route to Mt. Hayes, there are a number of ledges with restricted views.  I was uncomfortable with venturing out onto any of these ledges since I had no idea what icy conditions might lie beneath the layer of freshly fallen snow.  From the rear of one of the ledges, I snapped a rather bland photo looking southward toward Shelburne-Moriah Mountain (see below). 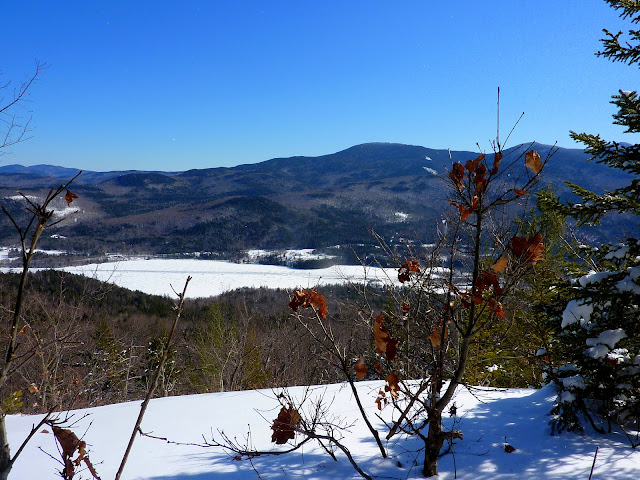 As I indicated earlier, the snow depth was only around 5 inches, and so breaking through the powdery snow was no problem and required little effort.   However, as I came within a few tenths of a mile from the summit, the snow depth increased to a foot or more.  This made things a bit more difficult.  And, the difficulty was compounded by a herd of moose who had apparently decided to hike the trail earlier in the day.  Since these "hikers" had failed to wear snowshoes, they created deep holes in the snow (known as postholing) which made a very uneven surface.   To truly appreciate what it's like to follow in the bumpy footsteps of a moose, you need to experience it.  A photo is of little help and simply doesn't capture the sensation.
After awhile, the moose tracks headed off in another direction at a point where the trail makes a sharp left and ascends rather steeply.  Most likely, the moose know a way to avoid this steep section since their annoying postholes rejoined the trail at a point where it leveled off.   Perhaps those who design the layout of trails should consider using the route followed by the moose in winter?!
Upon reaching the easterly summit of Mt. Hayes, my much dreaded wind was there waiting for me!  In the next photo you can sort of see the blowing snow in the middle of the snapshot where the snow and trees meet.  (You might need to click on the photo to enlarge it.) 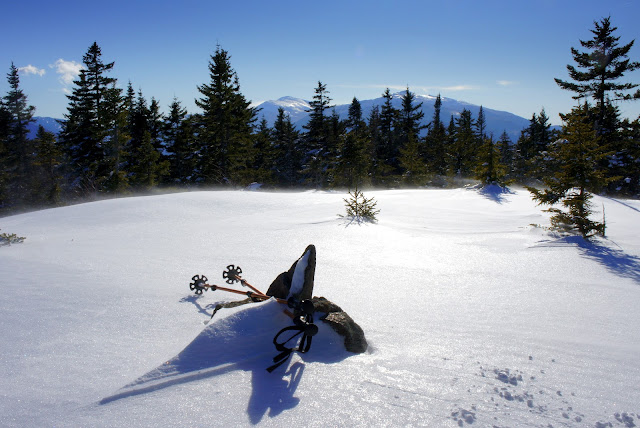 From the easterly summit of Mt. Hayes, I trudged onward for another 0.3 mile where the trail ends at a junction with the Mahoosuc Trail.  By this time, the wind was beyond my comfort level.  Nonetheless, I went the extra distance and trekked for another 0.2 mile to reach the true summit of Mt. Hayes.   By the time I got there, windblown snow was swirling all around me and I didn't even want to pull out my camera.  I was no longer having fun!
There was definitely no desire to continue onward for another 0.3 mile to reach the ledges on the southwest end of the summit.  There are nice views from those ledges, but I'd just been there in March 2011 when I hiked to Mt. Hayes via the Mahoosuc Trail.  My Blog report for that 2011 trip has photos taken from those ledges (Click HERE).
After the decision was made to end my journey, I turned around and headed back for the Centennial Trail.  Mother Nature is amazing!  The wind had already filled in my tracks.  You would never know that I'd traveled this section of the Mahoosuc Trail less than 20 minutes ago.
The Centennial Trail is more sheltered from the wind.  Therefore,  once I reached that trail my footsteps were once again visible.  And so, with the benefit of my trailbreaking endeavors during my ascent, the descent was quick and easy.  I only made one brief stop to attempt to capture the setting sun shining through the forest.  Although the next snapshot is not the greatest, it perhaps will provide a general idea of the scene I was attempting to capture. 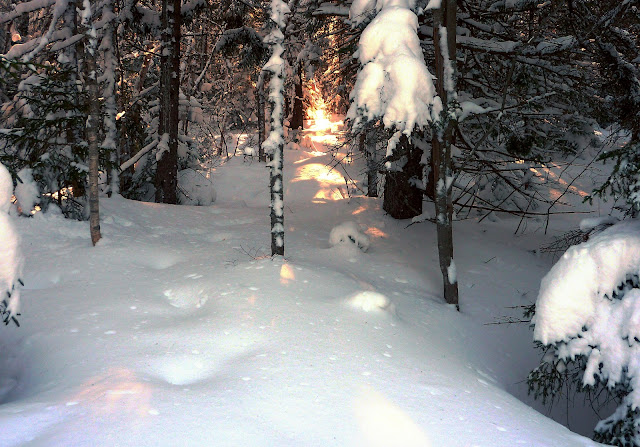 To sum it up, any day spent hiking in the woods is a good day, at least from my perspective.  Although no stunning views were experienced on this hike, I have no regrets.  Overall, it was an enjoyable day!
Posted by 1HappyHiker at 1:00 PM

Beautiful pictures from a true winter hike, John.
I've never had the experience of following in moose tracks! And you're right that the moose probably knew the best route for side-stepping the steep section of trail. We should follow their lead!
Nice post—and an interesting post from March 2011 as well.
Rita

It's tempting to personify the moose and wonder if they are standing back in the woods and chuckling as they watch the two-legged creatures struggle to climb up the steep pitch that they so adroitly circumvented! :)

Excellent report and photos John, you made the best of the day for sure. Centennial is a pleasant trail and your photos capture it nicely.

Your report just confirms what I feel, is the most beautiful time of year. There's something about stark whites against the stark blues that is just breath-taking.

It's now official. I'm doing the 52WAV in winter.

Thanks for sharing John,
Joe

Joe, thanks for your nice comments!
Allow me to be among the first to congratulate you on your decision to do the 52WAV in winter!
It’s a decision that you won’t regret! :)

Great trip report - the photos are beautiful with the contrast of sky and snow. For some reason, you just seem to be able to capture the light just right and in interesting ways, as that last photo shows. Wind isn't my favorite hiking thing, either, after a big scare one day up on Franconia Ridge. Throughout this fall and winter season, I have gained more confidence and am able to cope better with it. I also now know my limits as to what conditions I'll hike in or not.

What a great post! I love the pictures you took. You really captured the feeling of being up there. Do you ever run across any moose while you're hiking?

Thanks for the generous words!
Regarding moose, yes on occasion I have seen moose while hiking. However, it is rare that they stay in sight long enough for me to get a good photo. It’s my impression that in order to get good photos of moose, you have to employ techniques similar to hunters. However, instead of bagging the moose with a gun, you “shoot” it with your camera.